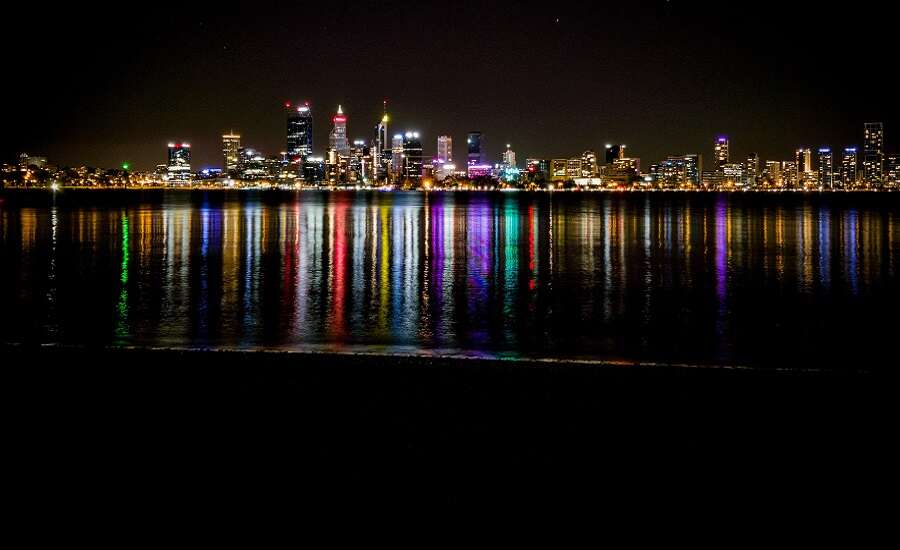 Photo by Alvin Lenin on Unsplash

What are the public holidays in Russia?

Basically in Russia there are as many official holidays as in every other country of the world; eight to be exact. However, the interesting thing about Russian holidays is the following: they last long. Preparation for the holiday begins at least a day before it actually arrives. Then it is considered tradition to prolong the holidays if they are close to the week-end or if they just turn out to be on a Monday. So usually instead of one day off people get two or three free days. Sometimes even more – like a special Russian fiesta! Another nice thing about Russian holidays is that all the shops, supermarkets and the grocery stores are open throughout the day and usually work until the late evening, especially in big cities and downtown areas. It is not a good idea to plan any business during a Russian holiday, since people just don't think about work. But taking a tour to Russia at this time could be quite interesting. You can escape that awful rush hour traffic, which is very common during an average business day. As a matter of fact you will get a chance to see cheerful Russians and witness how they party. Believe me - this is something to discover!

Despite the fact that to foreigners Russians seem to celebrate something all the time, there are only eight official holidays in the country. Of course there are many days in which it is considered appropriate to celebrate, such as the day of printing, or the day of geologists, the day of chemists, the library day, the day of the frontier guard, the day of Slavic literature and culture; there is even a fisherman's day and many more dates to drink for someone's respectable profession or something else completely unrelated. Basically Russian people can celebrate something almost every day. Sometimes there is a good reason for a big party, but no reason is needed to celebrate life by having a drink with a few friends. 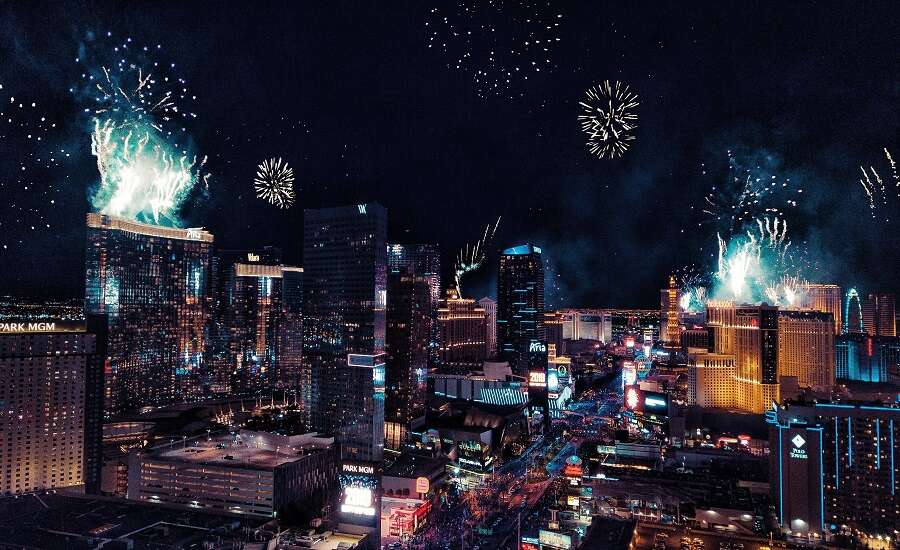 Photo by Ameer Basheer on Unsplash

The most beloved holiday for all Russians is New Year's Day. There are a few reasons for this. First, this holiday connects everyone with their childhood, in particular their youthful dreams, hopes and beliefs in miracles. Another reason is that the holiday usually lasts more than a week because of the Russian Orthodox Christmas, which immediately follows the New Year. These two holidays provide about 10 days off for Russians, like a nice winter vacation. Russians try to use this time as best they can. Many people go to the country side to ski, escape the hustle and bustle of city life, and get some real winter rest by going to the sauna or typical Russian banya. Others love to stay at home with their relatives and friends. New Years day is considered to be a holiday, when people spend time with their family. Most Russians get fir trees shortly before the holiday season and decorate it with different toys and lights. Russians do not decorate their windows as in western countries; however, in the past few years this tradition has slowly grown and sometimes you can see lights in the windows of people's homes.

Anyway, the main idea of this holiday is to join your family and to think about good things: love, friendship, kids etc. Another very important thing here is food. Russians like to eat tasty food and make lots of dishes for holiday meals. The most traditional are duck baked with apples, galantine, red caviar, pickled vegetables such as mushrooms, cucumbers, sauerkraut, plus salads like "Stolichny" (close to Olivier) and of course all this with a glass of champagne and heavier drinks as well. Russians love to watch TV on New Year's Eve. They start usually with some comedy programs or romantic movies. "The Irony of Fate, or Enjoy your Bath!" is shown a few times during the evening! Also the absolute majority of people like to watch the traditional President's speech a few minutes before 12 o'clock.

After a few hours of celebrating, some people like to go outside for a walk and light off fireworks. Currently, New Years fireworks are very popular since they are very easy to buy and stunning as well.
Since there is a lot of snow during the winter months, it is nice to have fun outside – maybe try out a sleigh – you'll never forget this! Also there is the tradition of exchanging presents, especially with children. As in most foreign countries some fat guy in a red coat brings impressively-decorated gifts, but in Russia this character is named Ded Moroz (Father Frost) not to be confused with Santa Claus. He is usually dressed in a long red fur coat, although sometimes it could be blue or silver. He also has a girl, probably his granddaughter, who travels around with him named Snegurochka. Snegurochka is always very pretty, has long blond hair, wears a nice blue coat and likes to play with kids.

After the New Year, Russians celebrate the Russian Orthodox Christmas. Russia differs with many western countries in that Christmas is celebrated on the 7th of January, not on the 25th of December. Religious people go to church, since there is a big celebration there. Others stay at home and have a small Christmas dinner with family and friends. Christmas is a good time to be with family, but basically for Russians the New Year is more important of a holiday then Christmas - this is the main difference between Russia and Europe and the U.S. But again the main idea and spirit of these two holidays is to be together with the family and to be kind to one another - just like everywhere else in the world!

Defender of the Fatherland Day 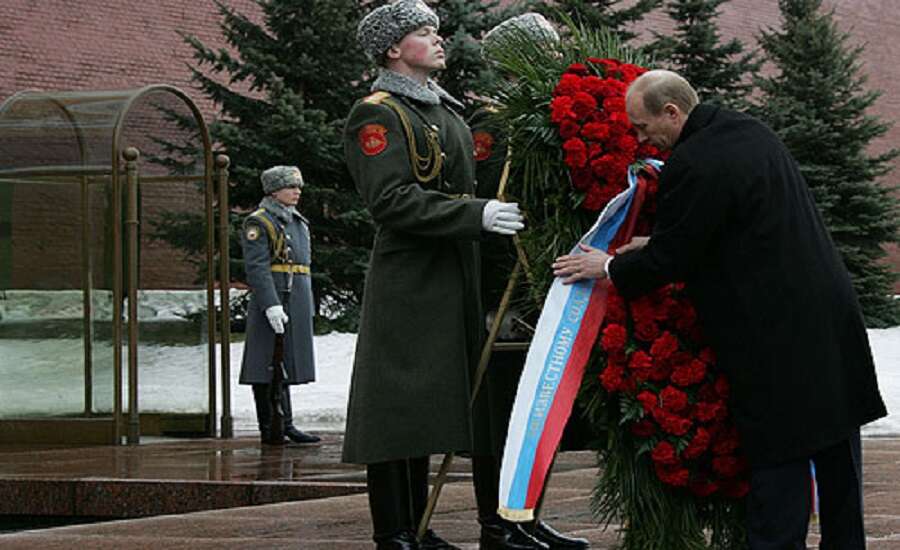 CC BY 4.0 by Kremlin.ru on Wikipedia

Next comes the 23rd of February - Defender of the Fatherland Day. This day is supposed to praise those who fought for the Russian land during the wars, especially during World War II and also all the men connected with service in Russian Army. Nowadays this holiday turned out to simply be a man's holiday, where all males, regardless of their profession or involvement in any war, are praised. It really doesn't matter now what the man is doing or how old he is, it is perfectly acceptable for people to want to congratulate and reward him with presents. Also, since Valentine's Day only appeared in Russia a few years ago and is not widely celebrated, the 23rd of February is a good opportunity for women to express their feelings for a particular man. 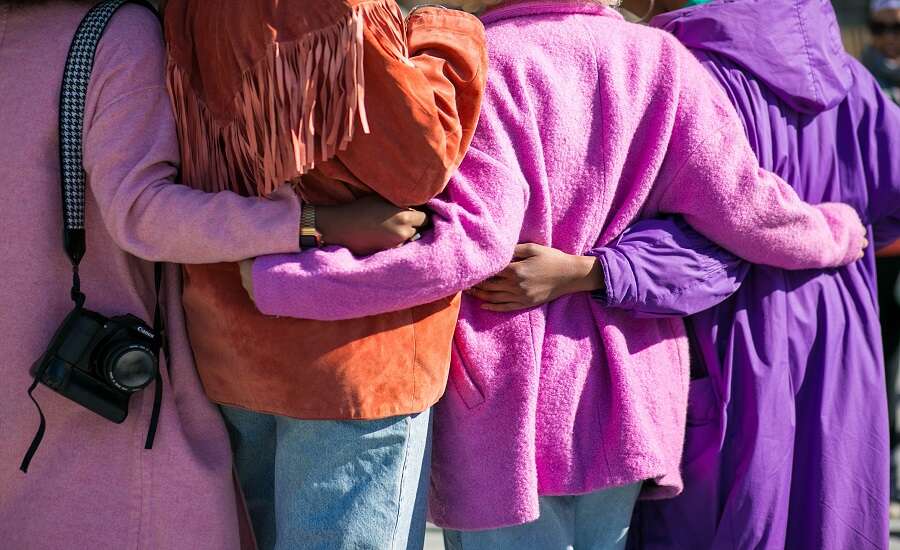 Photo by Vonecia Carswell on Unsplash

The 8th of March is known as International Women's Day. It seems as though only in Russia is this holiday celebrated so widely! I've never seen any big celebration in Europe or the United States on this day. Although historically this day manifested women's solidarity and proclaimed fight for equal rights and emancipation, nowadays it appears to be all about femininity, flowers and gifts. Thsi is the day when all men in Russia suddenly realize how great all those women around them are and get flowers and presents for their ladies, daughters, female colleagues and actually any woman they know. Women all look gorgeous and are dressed very well on this day, because they are surrounded with flowers and that special man's attention! When it comes to celebrating here, any way is a good way. A home-cooked dinner, a romantic restaurant, a bar with good friends, a night club, or a walk in the park on a nice day – anything that you feel like doing is fitting and some wine is, of course, consumed to provide for a relaxing mood! 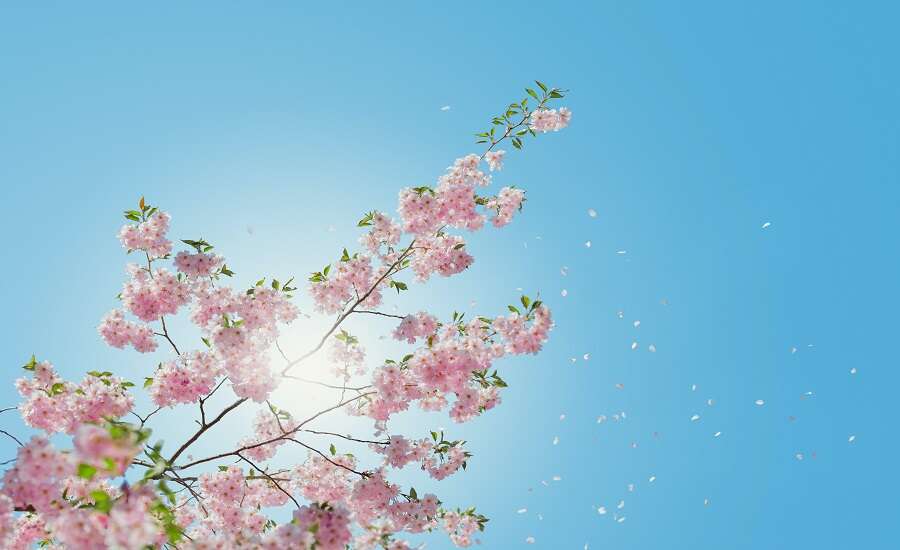 Photo by Anders Jildén on Unsplash

The 1st of May in Russia is traditionally the Spring and Labor Day holiday. In Soviet times this day was celebrated very grandly throughout the whole country. Demonstrations were held in every city of the Soviet Union, from Moscow to even the smallest towns. Everyone wanted to be a part of the big celebration. The streets were decorated with red flags and balloons. Today this holiday is mostly just a good opportunity to go outside, celebrate the onset of spring, and simply to meet friends or even take a short vacation, because the next holiday occurs in the next few days and sometimes it is possible to combine two holidays into one vacation. 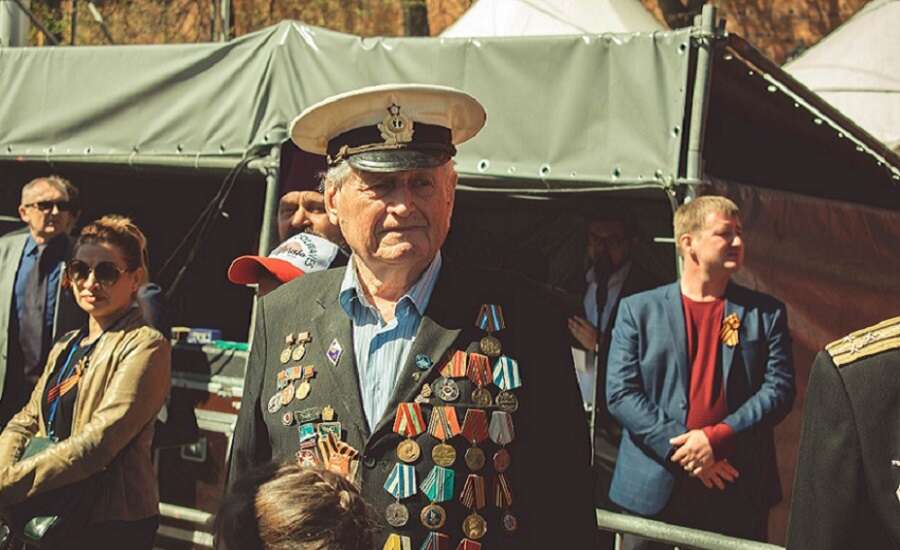 Photo by Daniel Ioanu on Unsplash

The 9th of May is known as Victory Day. The day of the victory in World War II is an extremely solemn holiday with a salute (firework display) at the end of the day. Even though most of the veterans of WWII are not alive nowadays, there are parades in the centers of each city all over the country, and in the evening there is a traditional salute. This holiday is of special importance to the youth as they learn about the terrible war from the stories fo their grandparents and the importance of peace all over the world. Many people have a meal, gather with family and friends, recall the heroes of the wars and in the evening go downtown to see the salute. Recent years newly established tradition of marches of 'Immortal Regiment' have an outstanding number of participants. This is when people parade with portraits of their relatives who fought in World War II. This tradition unites peoples of all ages in many cities and towns of Russia. 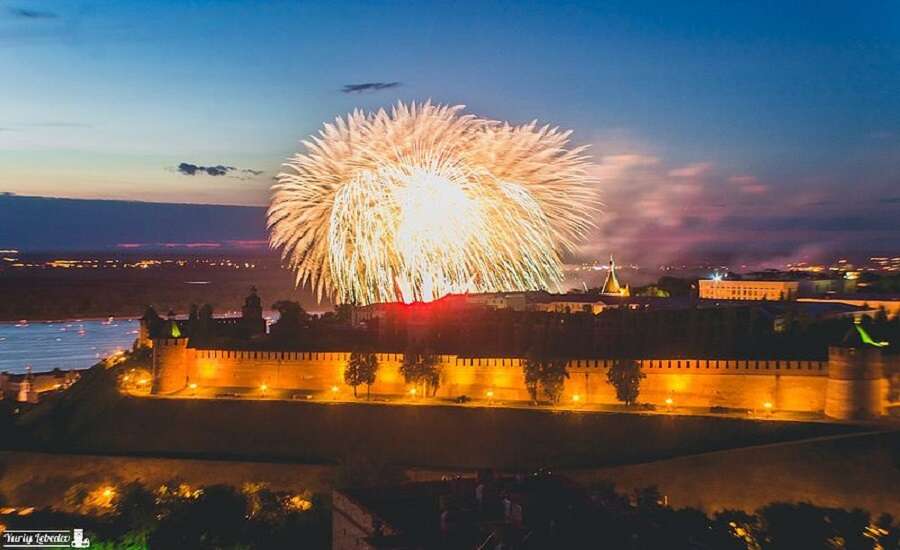 CC BY 4.0 by Юрий Лебедев  on Wikipedia

Russia Day is celebrated on the 12th of June. This holiday has not been here for very long, in fact it only appeared in 1992. This day underlines the events which happened when the Soviet Union collapsed and the first president of the Russian Federation was elected. To be honest people in Russia do not celebrate this holiday too much, they just appreciate an extra free day. This is a great time for visiting St. Petersburg as a tourist to see the festivities and the famous White Nights. 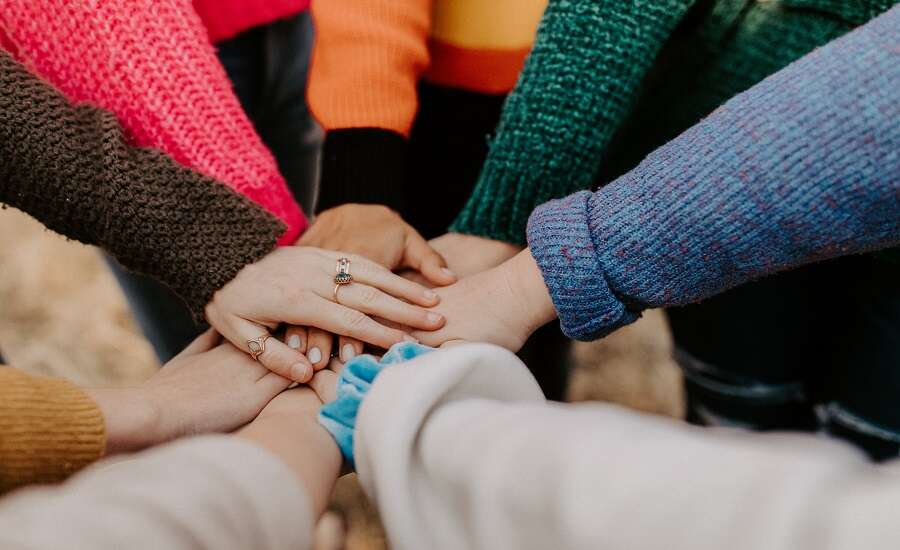 Photo by Hannah Busing on Unsplash

The 4th of November is known as the Day of People’s Unity or simply Unity Day. This holiday is the newest one, established only in 2005. It commemorates uprising which expelled Polish–Lithuanian occupation from Moscow in 1612, when all the classes of Russian society united to preserve Russia's independence. This holiday is considered by many as an attempt to replace the celebration of the October Revolution that was held on November, 7 and is abolished in modern Russia. As the holiday is new, traditions to celebrate it are yet to be set.