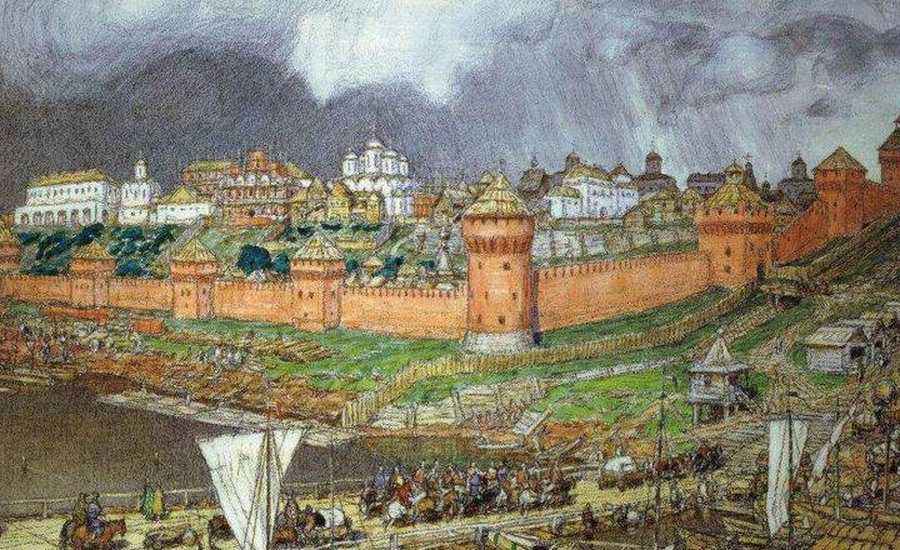 Russia after the Mongol Invasion

The Rise of Moscow 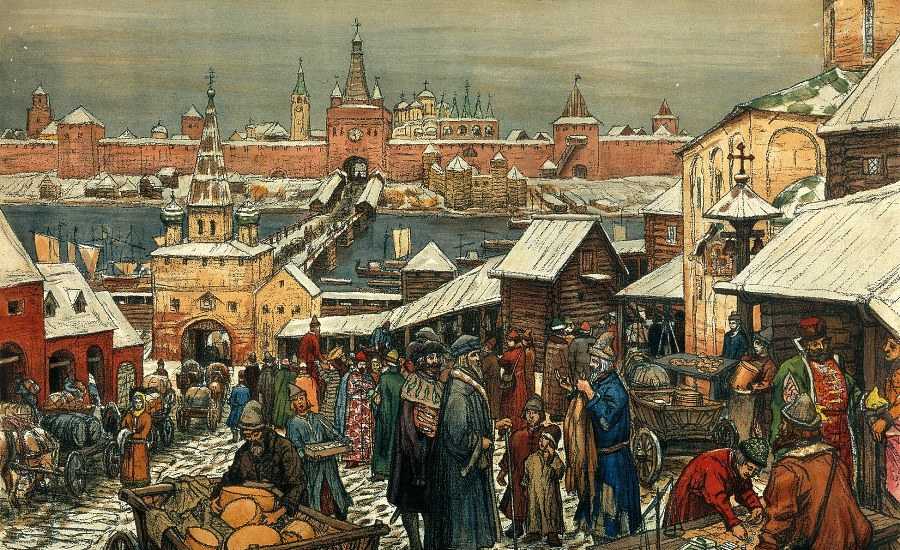 Daniil Aleksandrovich, the youngest son of Nevsky, founded the principality of Muscovy based in the city of Moscow, which eventually expelled the Tartars from Russia. Well-situated in the central river system of Russia and surrounded by protective forests and marshes, Muscovy was at first only a vassal of Vladimir, but soon it absorbed its parent state. A major factor in the ascendancy of Muscovy was the cooperation of its rulers with the Mongol overlords, who granted them the title of Grand Prince of Russia and made them agents for collecting the Tartar tribute from the Russian principalities. The principality's prestige was further enhanced when it became the center of the Russian Orthodox Church. Its head, the metropolitan, fled from Kiev to Vladimir in 1299 and a few years later established the permanent headquarters of the Church in Moscow.

By the middle of the 14th century, the power of the Mongols was declining, and the Grand Princes felt able to openly oppose the Mongol yoke. In 1380, at Kulikovo on the Don River, the khan was defeated, and although this hard-fought victory did not end Tartar rule of Russia, it did bring great fame to the Grand Prince. Moscow's leadership in Russia was now firmly based and by the middle of the fourteenth century its territory had greatly expanded through purchase, war, and marriage. 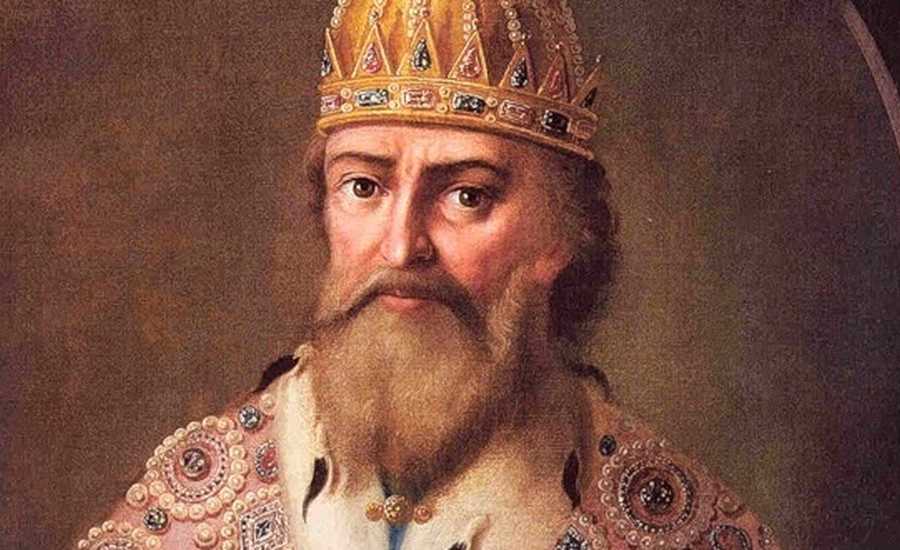 In the 14th century, the grand princes of Muscovy began gathering Russian lands to increase the population and wealth under their rule. The most successful practitioner of this process was Ivan III, the Great (1462-1505), who laid the foundations for a Russian national state. A contemporary of the Tudors and other "new monarchs" in Western Europe, Ivan more than doubled his territories by placing most of north Russia under the rule of Moscow, and he proclaimed his absolute sovereignty over all Russian princes and nobles. Refusing further tribute to the Tartars, Ivan initiated a series of attacks that opened the way for the complete defeat of the declining Golden Horde, now divided into several khanates.

Ivan III was the first Muscovite ruler to use the title of "Tsar", derived from "Caesar", and he viewed Moscow as the Third Rome, the successor of Constantinople, the "New Rome". (Since Rome fell in 410 and the Byzantine Empire in 1453 to the Ottoman Turks, Moscow concluded that it now fell to the "Third Rome" to save Christian civilization.) Ivan competed with his powerful northwestern rival Lithuania for control over some of the semi-independent former principalities of Kievan Rus' in the upper Dnieper and Donets River basins. Through the defections of some princes, border skirmishes, and a long, inconclusive war with Lithuania that ended only in 1503, Ivan III was able to push westward, and Muscovy tripled in size under his rule.

Internal consolidation accompanied this outward expansion of the state. By the 15th century, the rulers of Moscow considered the entire Russian territory their collective property. Various semi-independent princes still claimed specific territories, but Ivan III forced the lesser princes to acknowledge the grand prince of Muscovy and his descendants as unquestioned rulers, with control over military, judicial, and foreign affairs. Gradually, the Muscovite ruler emerged as a powerful, autocratic ruler - a tsar. 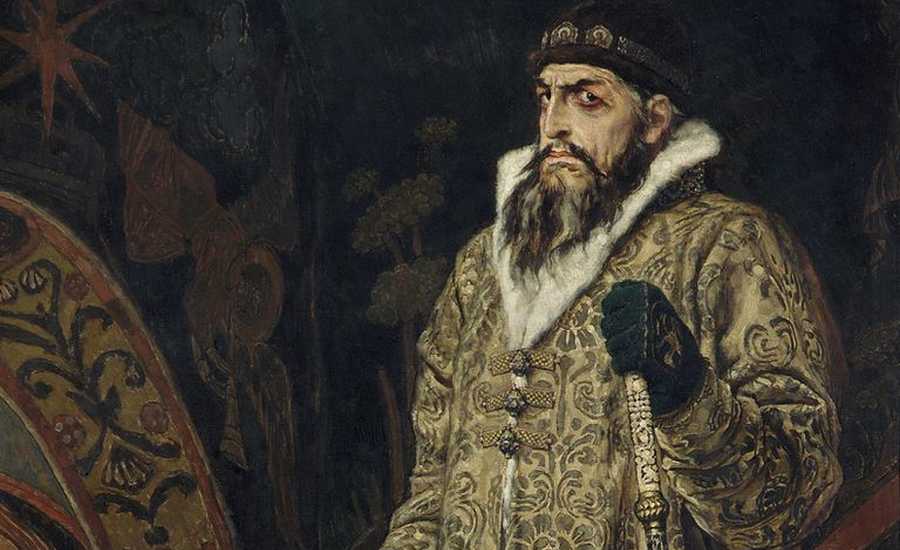 The development of the tsar's autocratic powers reached a peak during the reign of Ivan IV (1547-1584), and he became known as "Ivan the Terrible." Ivan strengthened the position of the tsar to an unprecedented degree: he ruthlessly subordinated the nobles to his will, exiling or executing many on the slightest provocation. Nevertheless, Ivan was a farsighted statesman who promulgated a new code of laws, reformed the morals of the clergy, and built the great St. Basil's Cathedral that still stands in Moscow's Red Square.

It was during the Scytho-Sarmation period that the Greeks started establishing their colonies on the coast of the Black Sea in southern Russia. Especially rich and influential among these colonies were Chersonesus, Sevastopol, Tanais, Panticapaeum and Olbia, which were all visited by the above-mentioned Herodotus. These colonies began as fishing enterprises but later grew into flourishing commercial centers. But what's more important is that they made the highly developed Greek culture available to inhabitants of southern Russia and thus enabled their participation in the very pulse of the Hellenic world. The Iranians did nothing to destroy the Greek colonies, choosing instead to maintain trade and other contacts with them. Intermarriage and assimilation, not wars formed the basis of their relations. The close cooperation of the Greeks on one hand and the Scythians and the Sarmatians on the other had led to the emergence of a unique culture, which combined both European and Asian components. As we can see, the territory of Russia played a role in the construction of a bridge between Eastern and Western civilizations preceding the birth of Christ. 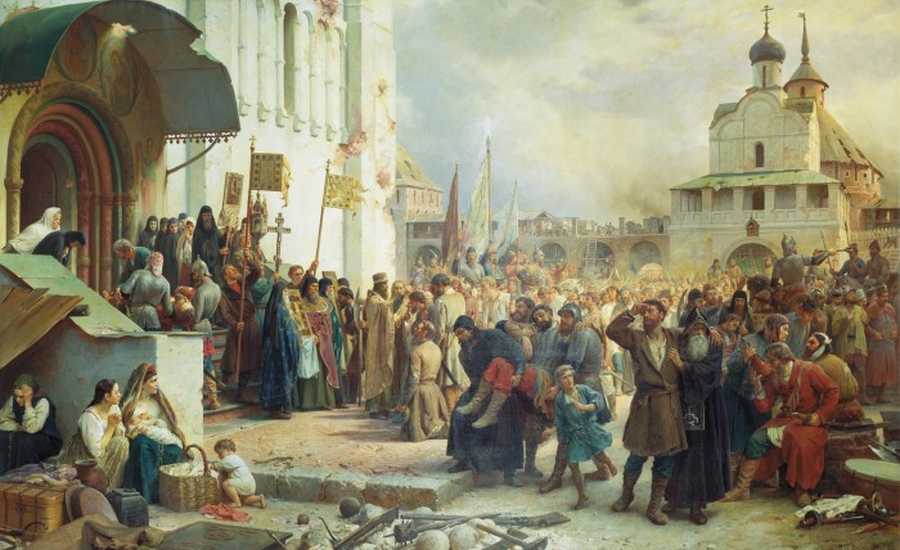 Ivan's death in 1584 was followed by a period of civil wars known as the "Time of Troubles". These troubles related to the succession and resurgence of the power of the nobility.

The autocracy survived the "Time of Troubles" and the rule of weak or corrupt tsars because of the strength of the government's central bureaucracy. Government functionaries continued to serve, regardless of the ruler's legitimacy or the faction controlling the throne. The succession disputes during the "Time of Troubles" caused the loss of much territory to the Polish-Lithuanian Commonwealth and Sweden during the wars such as the Dymitriads, the Ingrian War and the Smolensk War. Recovery for Russia came in the mid-17th century, when successful wars with the Polish-Lithuanian Commonwealth (1654-1667) brought substantial territorial gains, including Smolensk, Kiev and the eastern half of Ukraine. 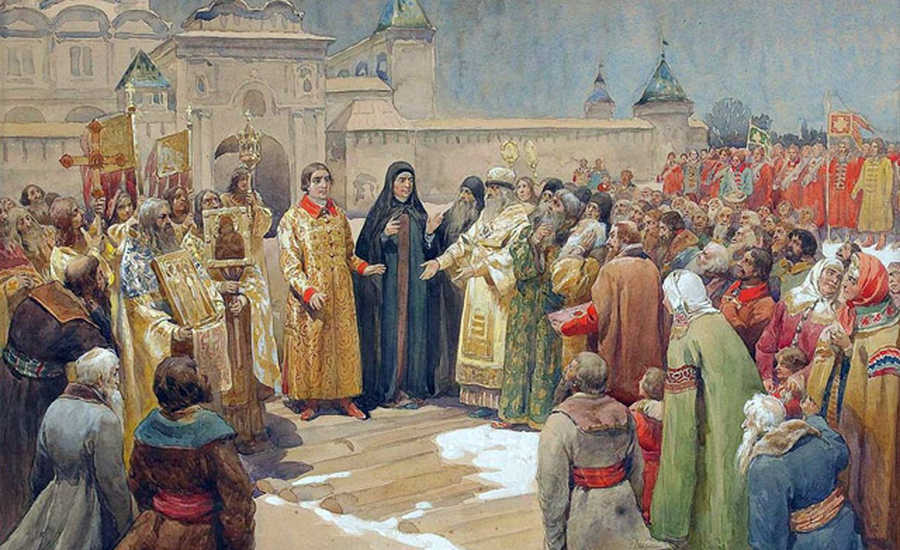 Order was restored in 1613 when Michael Romanov, the grandnephew of Ivan the Terrible, was elected to the throne by a national assembly that included representatives from fifty cities. The Romanov dynasty ruled Russia until 1917.

Rather than risk their estates in more civil war, the great nobles or boyars cooperated with the first Romanovs, enabling them to finish the work of bureaucratic centralization. The state required service from both the old and the new nobility, primarily in the military. In return the tsars allowed the boyars to complete the process of enserfing the peasants.

In the preceding century, the state had gradually curtailed peasants' rights to move from one landlord to another. With the state now fully sanctioning serfdom, runaway peasants became state fugitives. Landlords had complete power over their peasants and bought, sold, traded, and mortgaged them. Together the state and the nobles placed the overwhelming burden of taxation on the peasants, whose rate was 100 times greater in the mid-17th century than it had been a century earlier. In addition, middle-class urban tradesmen and craftsmen were taxed, and, like the serfs, were forbidden to change residence. All segments of the population were subject to military levy and to special taxes. 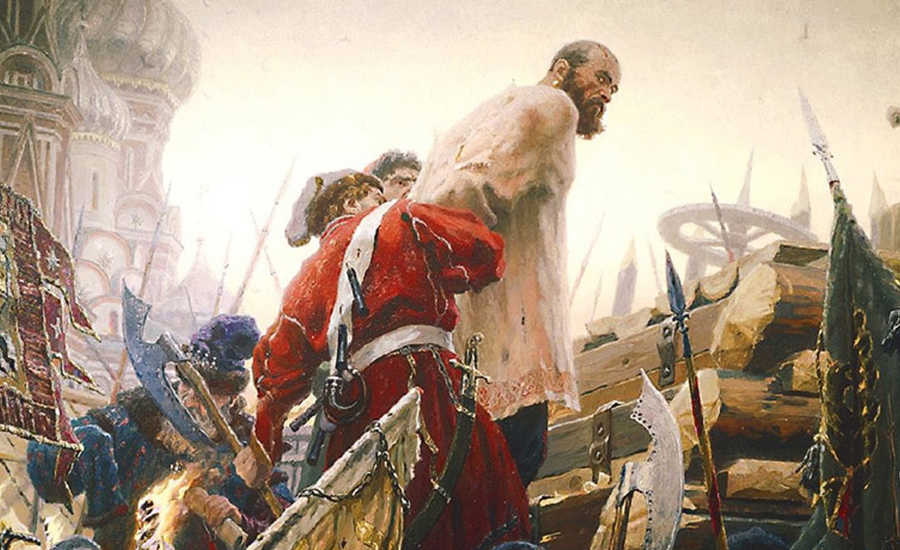 The greatest peasant uprising in 17th century Europe erupted in 1667, in a period when peasant disorders were endemic. As the Cossacks reacted against the growing centralization of the state, serfs joined their revolts and escaped from their landlords by joining them. The Cossack rebel Stenka Razin led his followers up the Volga River, inciting peasant uprisings and replacing local governments with Cossack rule. The tsar's army finally crushed his forces in 1670; a year later Stenka was captured and beheaded. The uprising and the resulting repression that ended the last of the mid-century crises entailed the deaths of a significant share of the peasant population in the affected areas.

Read on to learn about the Imperial Russia.