Masha: From Moscow to Ulan-Ude 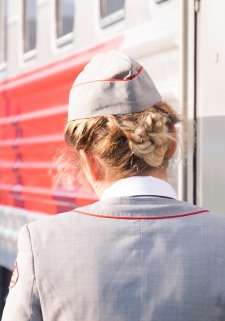 Masha typically took an upper berth in the cheaper class car called Platzkart (3rd class). This gave her the opportunity to read, sleep, or socialize depending on her mood. She occasionally travelled in coupe cars (2nd class) as well, but she prefers Platzkart because it gives more opportunities for a pleasant trip. Ideally she liked to travel with friends when they could take upper and lower berths and share an area among themselves.

While a coupe car is more comfortable, it carries some risks. Coupe only lets you socialize with a few people on your Russian rail journey, and just imagine being stuck with a boring or rude person for the entire five-day journey! If you travel by Platzkart, you can always escape this situation.

Getting good neighbours is extremely important! And if you don’t get good neighbors, you must ask the Provodnik for help! The Provodniks can move you to another car if there are any spare places. If you are really having problems and the Provodnik is unable to help, you can always appeal to the head of the train. This hardly ever happens though.

Masha had never had any problems on the train. Sure, there has been an occasional drunk or rude person, but nothing serious. The biggest problem Masha had ever had while traveling on Russian trains was when she shared a compartment with a man who slept all the time and snored very loudly, and the Provodnik moved her at her request and free of charge.

Conductors of the Transsib
Usually each wagon has two Provodniks, a day one and a night one. The Provodniks’ compartment is equipped with a small cupboard, and you can buy food from them during the journey. Their duties include washing the floors twice a day and offering the travelers tea or coffee. Masha told us that they are service-minded and quite easy to get on with. She also pointed out that if you travel during the school vacations almost all the Provodniks are young students earning some extra money.

Joy of the Journey 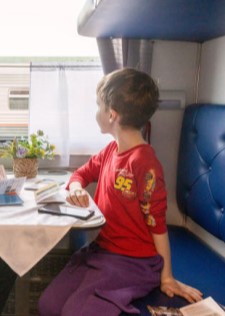 Masha thinks that traveling by train is lots of fun! You have the opportunity to make lots of friends and it’s very easy to talk to people on the train. She told us that it can take up to two days to get adjusted, but after that it is very enjoyable. There is also a very nice tradition when you are at the end of your journey, everyone left on the train wishes you luck and waves good bye to you. And if you are lucky, you may even meet a special someone on the journey!

Masha recalls one of the most interesting things in her life happened on the train. Between Moscow and Ulan-Ude, she met two old women – one was from Moldova and the other one from Ukraine. These women were folk singers; they had beautiful voices and sang for the whole car during the trip. The experience was extraordinary.

Winter trains come equipped with refrigerators! These are containers located between the cars. This allows you to transport food to your destination, but only Provodniks have the keys, so you can’t take things out whenever you want. Refrigerator service costs about two hundred rubles ($7).

Necessities of a Good Trip
Masha says that you don’t need to worry about food on the train! She generally brings yogurts and fast porridge, easily made with hot water. She advises everyone to bring a spoon, a plate, and a cup. You should also pack napkins and toilet paper. As the train passes by different cities you can buy food on the platforms at the stops. Masha also suggests bringing your own supply of pure water, while each compartment has a water boiler, you will want some normal water on the journey instead of always drinking tea and coffee.

Some of the stops offer some very interesting merchandise. For example, Masha says, near Omsk there is a factory that makes cookies and cream cakes, so everyone on the platform is selling these great pastries! Each city offers something unique and the closer you get to Baikal, the sooner you will be offered an extremely tasty fish! Masha recommends this to everyone; fish from Baikal are delicious! 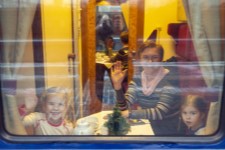 Masha advises everyone to bring comfortable clothes for the journey. T-shirts and trainers make the best outfit! Be sure to take a warm sweater as well, regardless of the season, as it can get chilly at night. An interesting fact about the train is that it has almost the same temperature in winter and summer. However, it is a little fresher in winter, so Masha prefers to travel during this season.

Masha says it’s very important to get out of the train on longer stops and take a short walk. A little exercise keeps you from getting giddy from being too long in the compartment. Take a careful inventory before leaving the compartment, make sure that you have your ticket, documents, money, and any small valuable like cameras with you when you leave. Large luggage and things that aren’t valuable can be left behind.

The End of the Journey
“Traveling through Russia on train is a lot of fun, but landscapes won’t impress you all the way,” - Masha says. The train generally stops at large cities twice a day, other than that you will see lots of Russian countryside dotted with small villages. The most charming parts of the journey are in Central Russia and the Urals. The mountains are stunning and before you get to them you will see lots of old attractive Russian architecture and churches. After this the journey gets a little dull as the great central plain of Russia is very long and not very developed. The high points here are the impressive rivers and bridges that the train crosses. After that though things become very exciting as you enter the Irkutsk region! You will pass through breath taking mountains and rich landscapes on your way to the pearl of Lake Baikal! The views here are dynamic and move quickly from one kind of nature to another. After Baikal comes the majesty of the East with Datzuns and the amazing architectural integrations of eastern and Russian culture, if you go all the way to Ulan-Ude where Masha is from you can expect this and more.

Other Destinations
How to order train tickets with us:

Learn about train tickets in Russia

See what you might need on a rail trip

Read what travellers have to say