What’s the history behind Palace Square?

St Petersburg’s largest and most magnificent square is undoubtedly Palace Square. A UNESCO World Heritage Site, the heart of Russian culture and history, and home to some of the city’s most famous attractions, no trip to St Petersburg would complete without a visit. 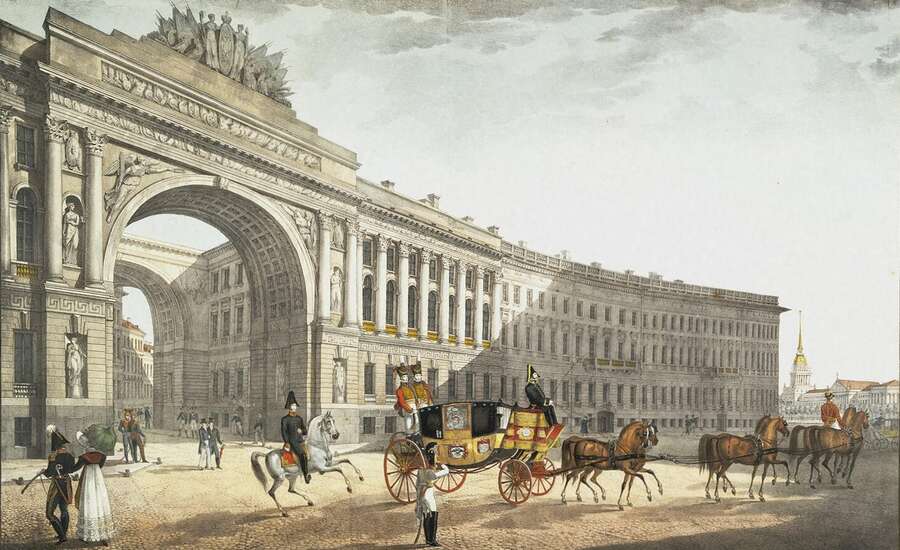 View of the Arch of the General Staff Building from Palace Square. Colored lithography, 1822, Karl Beggrov

The space where Palace Square now lies was initially a meadow used for livestock, markets and imperial festivities. The square itself was envisaged over an 89 year period, beginning in 1754 as part of Francesco Rastrelli’s designs for the Winter Palace, and finishing in 1843 with the construction of the Guard Corps. 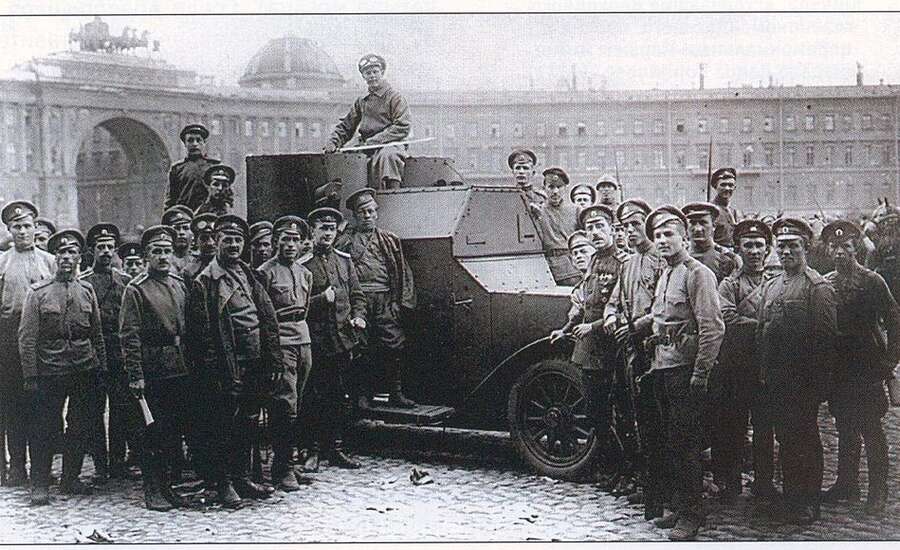 Despite its beauty, Palace Square has been home to some dark events in Russian history. On 5th January 1905, workers assembling in Palace Square were gunned down by imperial soldiers, sparking the First Russian Revolution. This was not to be a one-off event. On 26th October 1917, the Winter Palace was seized by workers, soldiers and sailors. The October Revolution had begun, and the very first Soviet decree was declared that same day.

Did you know? Palace Square during the Soviet era wasn’t all doom and gloom. A game of “Live Chess” was organised there in 1924, with sailors in white and soldiers in black as the ‘chess pieces’. After 5 hours, the game ended in a draw. 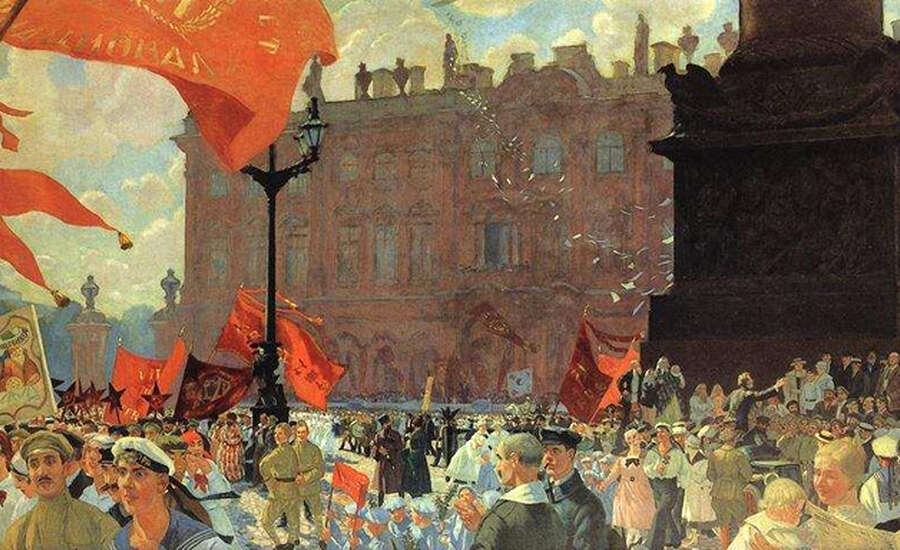 Celebration in honor of the 2nd Congress of the Comintern on Uritsky Square, 1921, by B. Kustodiev

From 1923 until 1944, Palace Square was renamed Uritsky Square after Moisei Uritsky, head of the Petrograd Cheka, was assassinated on the square in 1918. During the Second World War it was proposed to transform Palace Square into an airfield; luckily this plan was abandoned. It’s interesting that, despite the Soviet destruction of countless imperial architectural masterpieces, Palace Square and its surrounding ensemble remained untouched.

Did you know? Mass participation theatrical performances were organised on Palace Square in the early Soviet state, the most famous being The Storming of the Winter Palace in 1920, a reenactment of the momentous event by 6,000 actors and watched by over 100,000 spectators.

What can you see in the Palace Square today?

The Winter Palace and the State Hermitage Museum 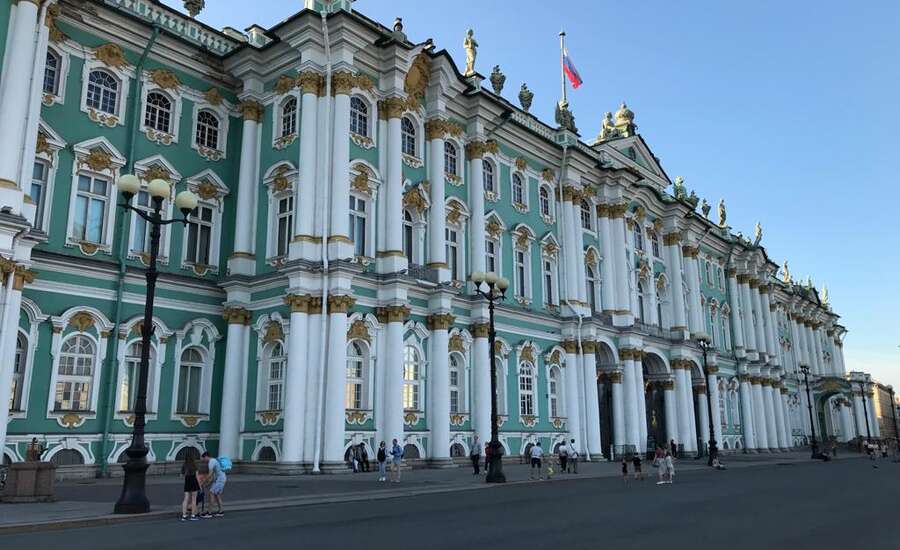 The most famous building on Palace Square is the Winter Palace, a white and turquoise masterpiece of Baroque architecture. Within the walls of the Winter Palace and its adjacent buildings is housed the State Hermitage, the second largest art museum on the planet.

The State Hermitage on Palace Square contains so many exhibits that, were you to peruse each one for just one minute, you would be there for 11 years. When you visit St.Petersburg, we would recommend to spend at least one full day at the Hermitage. 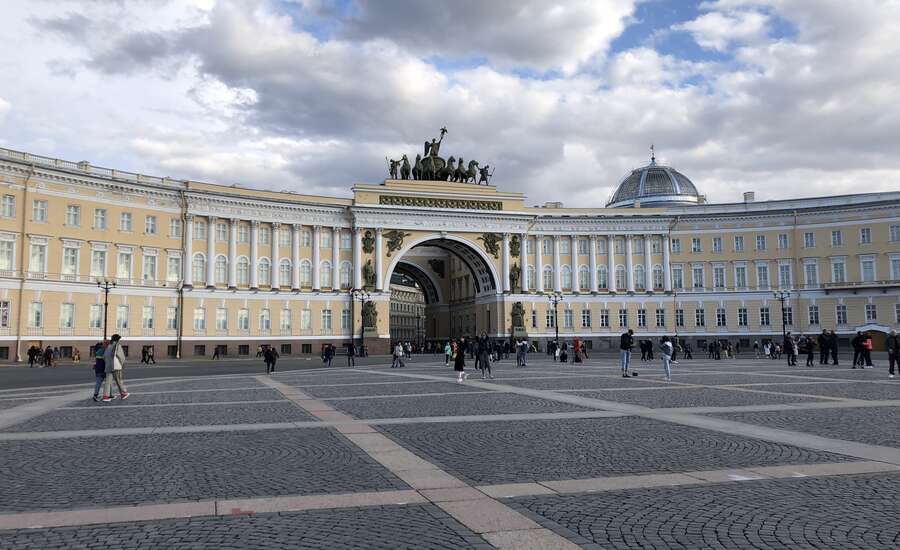 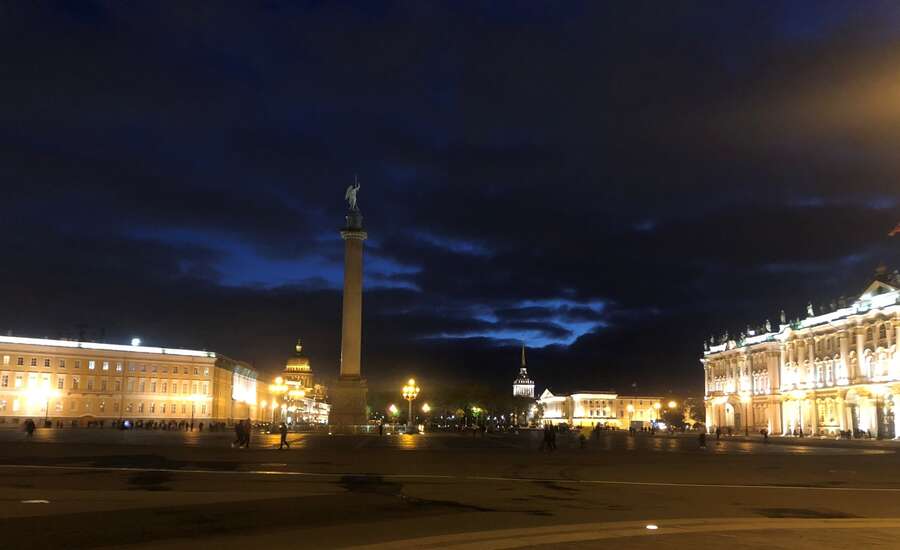 Did you know? St Petersburg’s residents were so terrified that the monolithic structure would fall, that its architect, Auguste Montferrand, walked his dog around the column every evening just to reassure them!

There is a St Petersburg wedding custom that the groom should carry his new bride around the Alexander Column - however many times he does this predicts the number of children they will have!

As Palace Square can accommodate up to 120,000 people, it is the ideal spot for festivities. The square hosts huge military parades, light shows, festivals and concerts. Even Madonna and Elton John have performed on Palace Square!

What can you visit nearby the Palace Square?

Aside from the Hermitage and General Staff building, many of St Petersburg’s top attractions lie close to Palace Square. 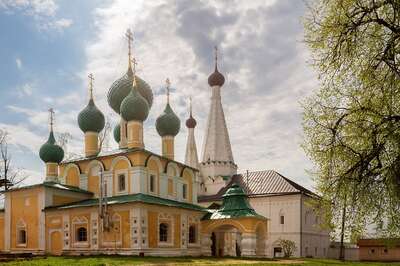 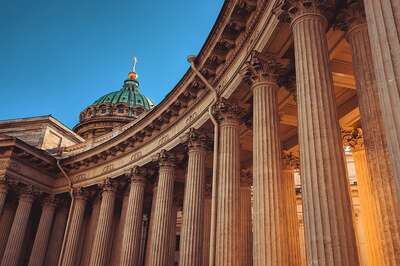 City Tour of St. Petersburg with visit to the Hermitage Museum with transport

The tour will take the visitor throughout the historical center of St. Petersburg and includes spectacular views of the Neva river, Canal Griboyedova, Moika canal, the many bridges...