History of the Hermitage

The State Hermitage Museum tells a story of opulence beginning in 1764, when Empress Catherine the Great acquired 225 paintings for her personal collection. Over the next two and a half centuries, this collection was to increase in size to over 3,000,000 exhibits showcasing the development of world culture and art from the Stone Age to the 20th century. Today, the State Hermitage Museum is the biggest and most popular museum in Russia, and the second largest art museum in the world. What is the story behind this magnificent institution of cultural heritage, and what can you find there today?

The Hermitage and Imperial Russia 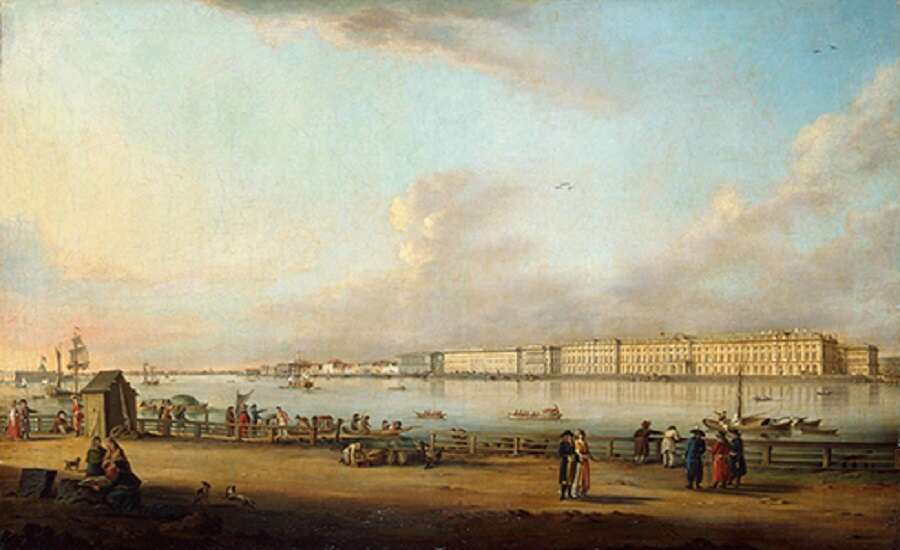 The story of the Hermitage begins with the construction of the Winter Palace as the imperial residence, completed in 1762 by famed architect Bartolemo Rastrelli. This masterpiece of Baroque architecture holds pride of place on Palace Square and is St Petersburg’s most recognisable building.

The Hermitage’s collection began two years later, and by the end of her reign Catherine the Great had amassed 4,000 works of art. The gallery took its name from the Old French words hermit, meaning recluse, and hermitage, meaning secluded hideaway, as it was an exclusive place only open to the privileged few.

Did you know? Describing the private nature of her gallery in a letter to the French philosopher Voltaire, Catherine wrote "only the mice and I can admire all this."

Over the next decades Catherine ordered the Small Hermitage, Great Hermitage and Hermitage Theatre to be constructed along the Palace Embankment. This laid the foundations for the museum complex and cultural programme patronised by the palace. Tsar Nicholas I finally opened the Hermitage Museum to the public in 1852.

Did you know? St Petersburg’s famous protected skyline originated with the construction of the Winter Palace. It was decreed that no building other than a church may exceed the height of the palace. This is why the city centre is so beautifully harmonious, and why you can appreciate a panoramic view from any high point.

In 1837, a fire raged through the Winter Palace for 30 hours. Although many artworks were salvaged from the burning palace, the fire completely devastated the original interior. Thankfully the corridors linking the Winter Palace with the Small Hermitage were dismantled, saving those collections from the flames. 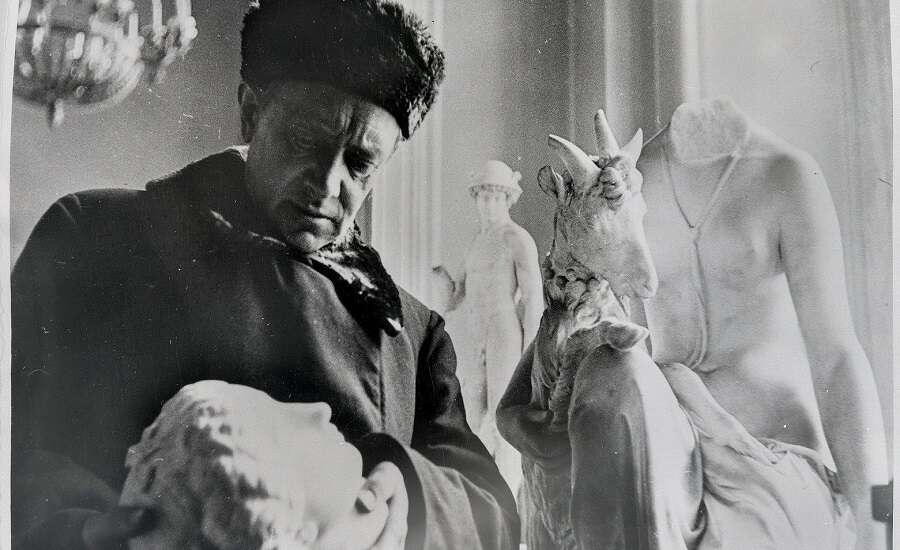 Following the outbreak of the First World War, the Hermitage was in for some tumultuous years. Most of the collection was sent to Moscow for safekeeping, and some halls were transformed into a hospital. The museum was nationalised after the February Revolution, and following the storming of the Winter Palace in October 1917 the Provisional Government was forced out and the Hermitage was passed to Bolshevik ownership.

Did you know? Most of the Hermitage’s staff welcomed the revolutions, as Nicholas II had only permitted the nobility to be employed at the museum.

Instead of destroying this pinnacle of Tsarist Russia, the Bolsheviks launched a full cultural programme complete with lectures, concerts and exhibitions in the Winter Palace. More and more exhibition halls were opened up to the public over the next few years, complete with a Museum of the October Revolution and the opportunity to look around the private quarters of the Romanov family.

Did you know? For the first 5 years following the Revolution, entrance to the Hermitage was free!

The Hermitage and Soviet Russia 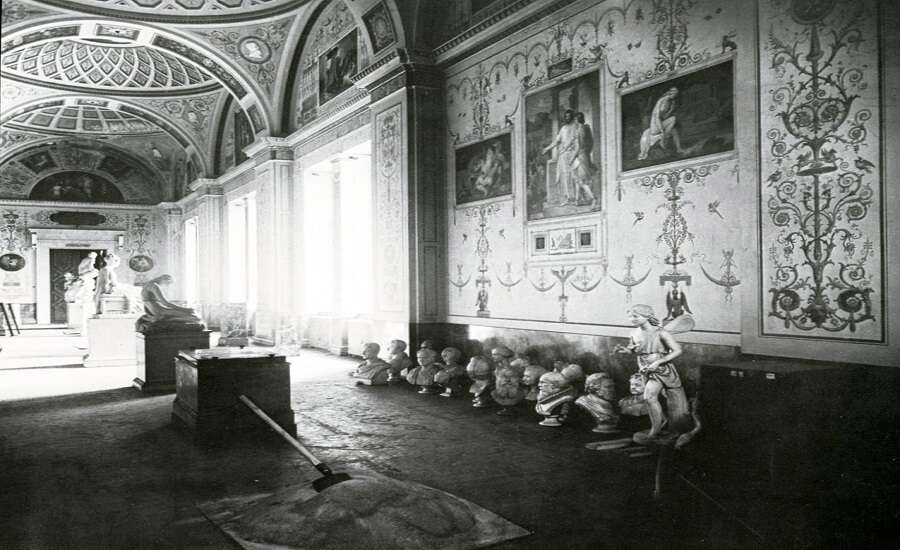 As the private collections of Russia’s most illustrious families were requisitioned by the Soviets, the Hermitage grew into a museum of culture from all around the globe.
However, other events of the Soviet era were to irreparably damage the Hermitage. Thousands of artworks were auctioned off to raise money or gifted to curry favour with foreign powers, resulting in the loss of some true masterpieces.

At the beginning of the Second World War, hundreds of volunteers began packing up the Hermitage’s collection for evacuation to the Urals. Despite the very real threat of starvation and bombardment during the 900 day Siege of Leningrad, the Hermitage staff continued to work faithfully in their vocation, delivering lectures in hospitals, carrying out scholarly research, protecting the buildings and constructing bomb shelters in the museum’s basement to house 12,000 people. 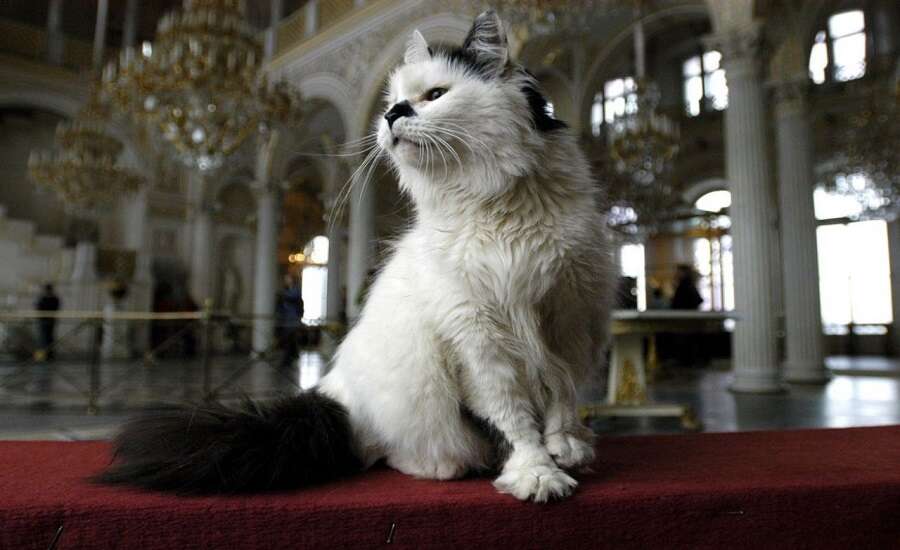 After the collapse of the Soviet Union there was a huge effort to renovate the Hermitage’s ensemble and kick-start cultural and educational programmes, for example the transformation of part of the General Staff Building into permanent exhibition space, and the founding of the Hermitage Volunteer Service.

Did you know? In 1997, a planet registered in the International Catalogue of Minor Planets was named ‘Hermitage’.

In recent years the Hermitage has opened research and exhibition centres around the world, including in Las Vegas, Ferrara and Amsterdam.

Did you know? It is not just humans who look after the Hermitage. Cats were employed in the royal household from 1745 onwards, and were later brought to the Hermitage to protect the priceless artworks from rats. After the Siege of Leningrad, literal train wagons of cats were brought to the city to deal with pestilence, some of whom ended up at the Hermitage.

Today over 70 cats, nicknamed the “ermichki”, live and work at the Hermitage. They have their own living quarters (partly located in the WWII bomb shelter) and special kitchen, and many of them were previously homeless. If you’re lucky you will see them slinking around, but if a chance sighting isn’t good enough for you, make sure to check out their Instagram page @hermitagecats.

Which collections can you see at the State Hermitage Museum today?

It is said that if you spent 12 hours per day perusing the exhibits for just one minute each, it would still take 11 years to see the Hermitage’s whole collection. You will need to plan your trip to the Hermitage carefully. But what can you find there? 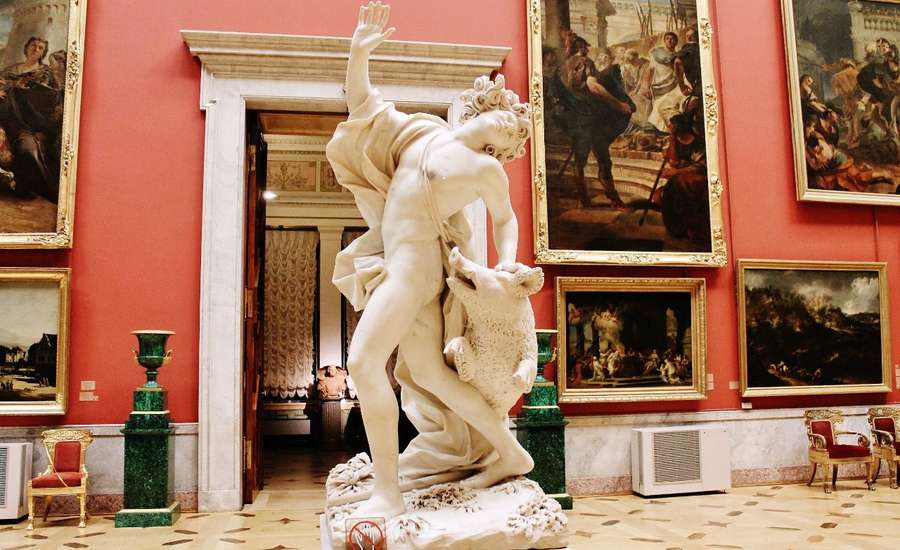 As the second largest art museum on the planet, the Hermitage houses works by some of the world’s most famous artists. Its collection of Western European art alone is spread over 120 rooms, and there are separate exhibitions about the art and culture of East Asia, Central Asia and Siberia. Just some of the household names found in the main complex include Rembrandt, Giorgione, da Vinci, Raphael, Titian and Rubens. The General Staff Building houses works by Monet, Renoir, Matisse, Van Gogh and Picasso. Of course, those looking specifically for Russian work should also visit the Russian Museum, the world’s largest collection of Russian fine art.

Did you know? Of only 12 surviving works by Leonardo da Vinci in the world, two can be found at the Hermitage - ‘Madonna and Child’ and ‘Benois Madonna’. 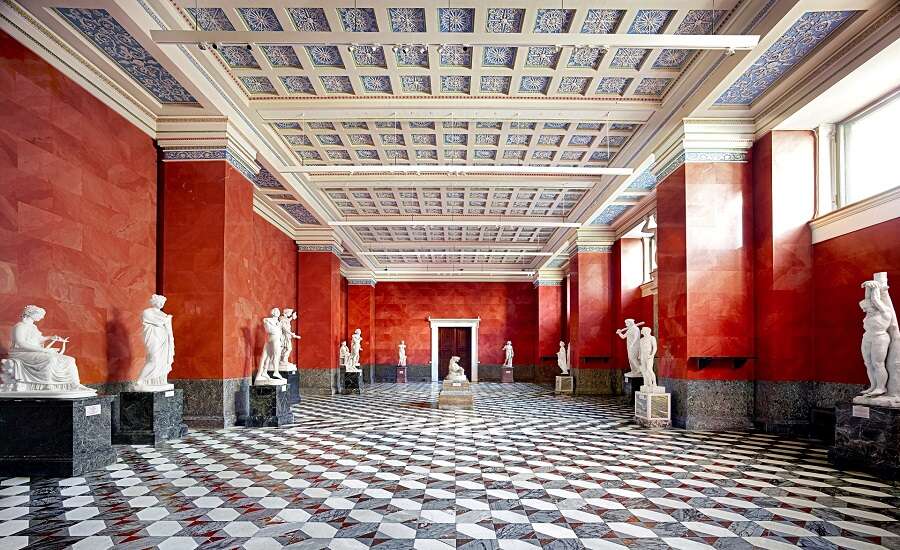 Amongst the Hermitage collections are a huge number of artefacts from Byzantium, Ancient Egypt, Greece, Rome, Central Asia, the Middle East and the Caucasus, reaching as far back as the Paleolithic Age. The collections span art, religious items, archeological finds and more. Many of these items were acquired from aristocratic and imperial private collections requisitioned during Soviet times.

Did you know? Nearly one third of the Hermitage’s collection comprises archeological artefacts! 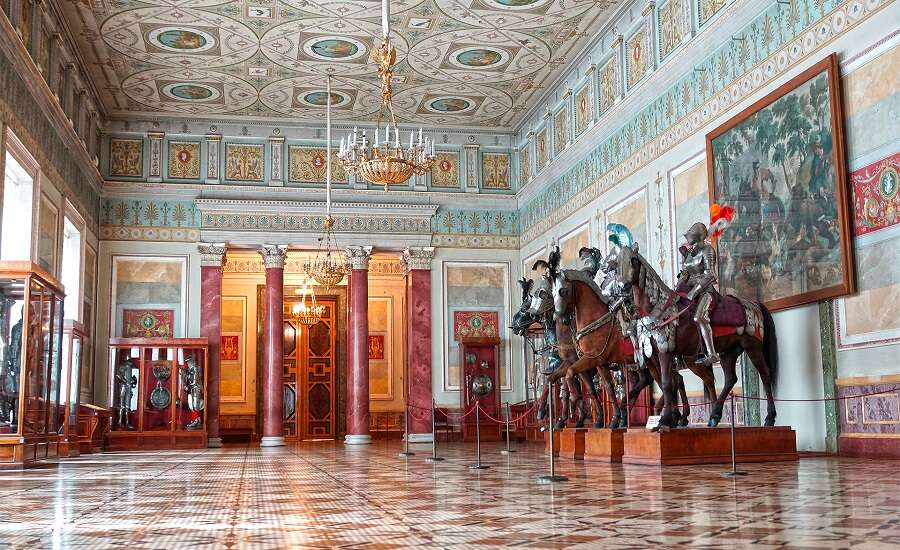 Did you know? The Middle Eastern collection was heavily contributed to by the spoils of war. 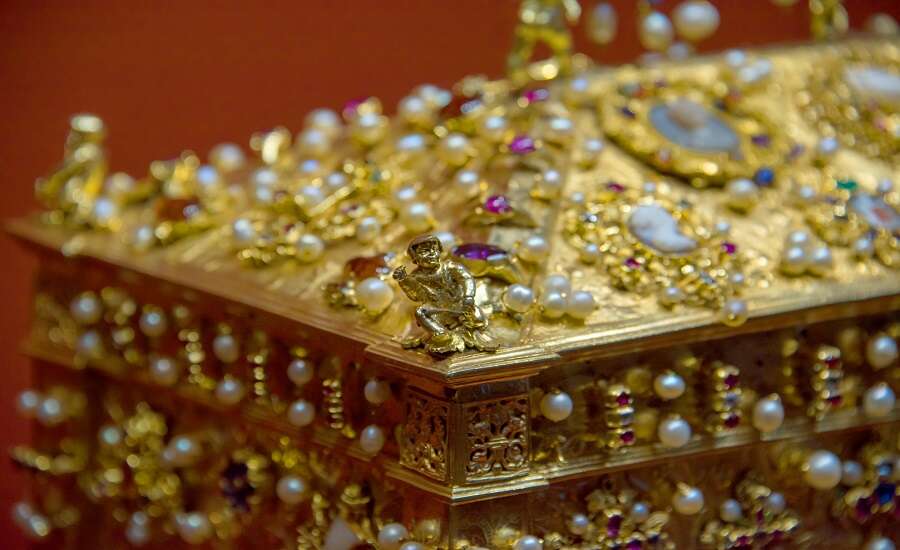 A visit to the Treasure Galleries will reveal the true affluence of the Romanov family. The Diamond Room exhibits masterpieces by Russian and European craftsmen, jewellery and jewel encrusted ornaments and weapons, and items created by Faberge. The Gold Room is home to Ancient Greek and Oriental jewellery, sculptures and weapons. The personal collection of the Russian Imperial Family formed the basis of the Treasure Galleries.

Please be aware that the Treasure Galleries are not included in the Hermitage ticket. Guided excursions must be booked separately.

If you aren't an art enthusiast, don't be deterred; the stately rooms housing the collections are themselves worth a day’s exploration. Admire the sumptuous interior decoration and architecture and really see how the tsars used to live. 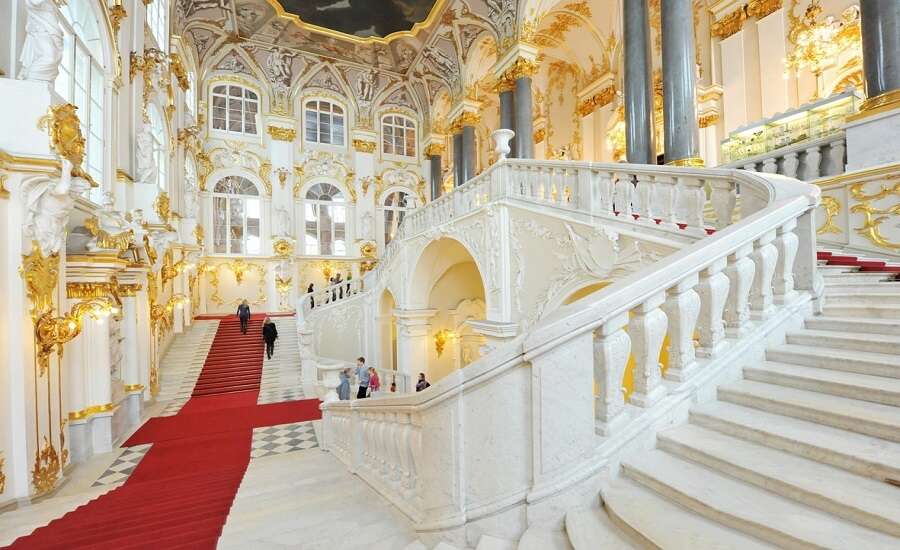 The ceremonial staircase of the Winter Palace, one of the only rooms reconstructed according to original plans after the 1837 fire. It is decorated with a ceiling fresco depicting the Gods at Mount Olympus and allegorical statues - two of the whom represent “Grandeur” and “Opulence.” 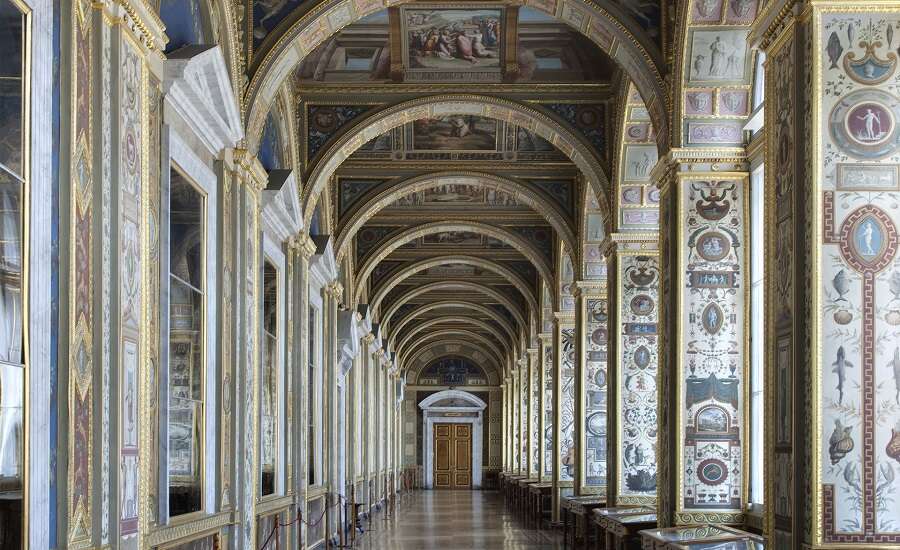 Part of the Italian Renaissance Galleries and located in the Great Hermitage. The Loggias were designed as an exact replica of the frescoes in the Vatican Papal Palace and are astoundingly harmonious and symmetrical. 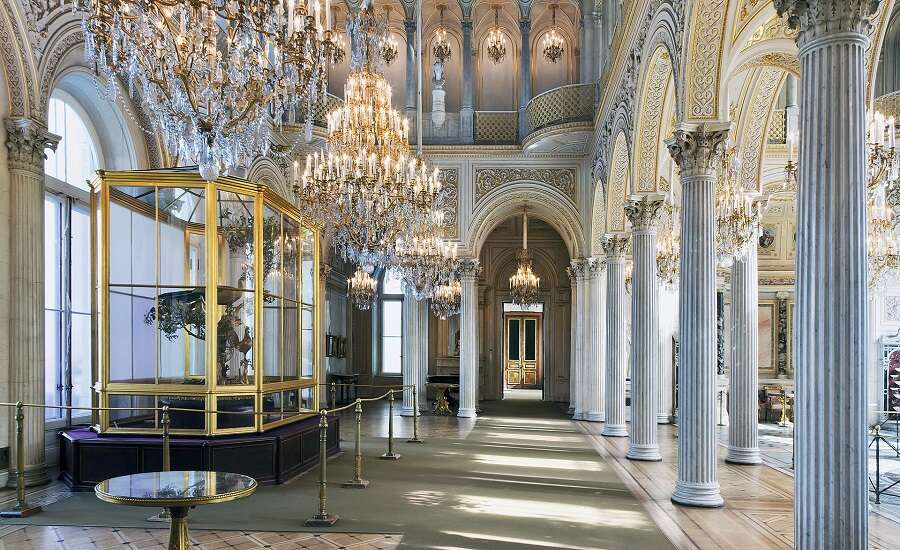 Designed for Catherine the Great and located in the Small Hermitage, Pavilion Hall is constructed from white stone, marble and gold leaf in a medley of different architectural styles, with crystal chandeliers and lace-like carvings. It is home to the Peacock Clock, a gilded work of art which chimes once per week, on Wednesdays at 5pm. 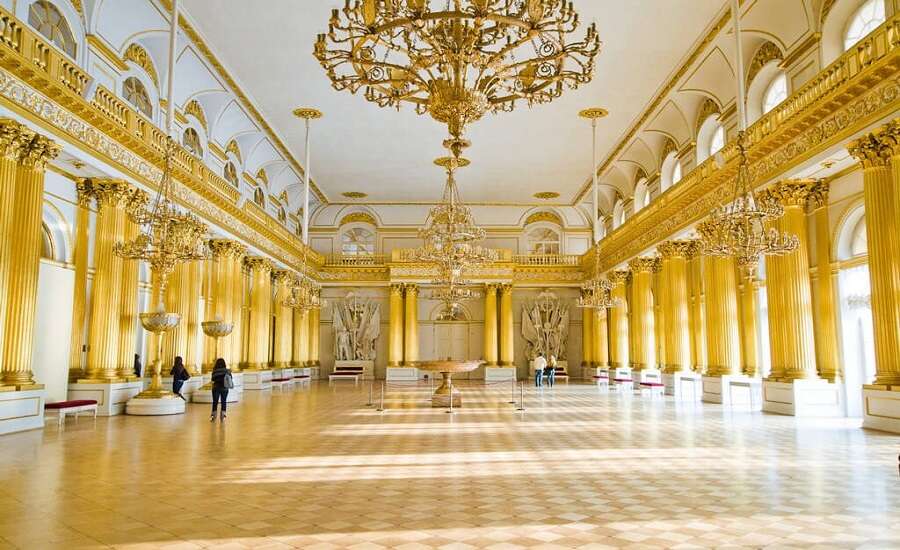 A vast ceremonial chamber and one of the Winter Palace’s largest entertaining rooms, it was transformed into a 2000-person concert hall after the Revolution. Today it has been renovated to its original glory with natural motifs, chandeliers and gilded columns 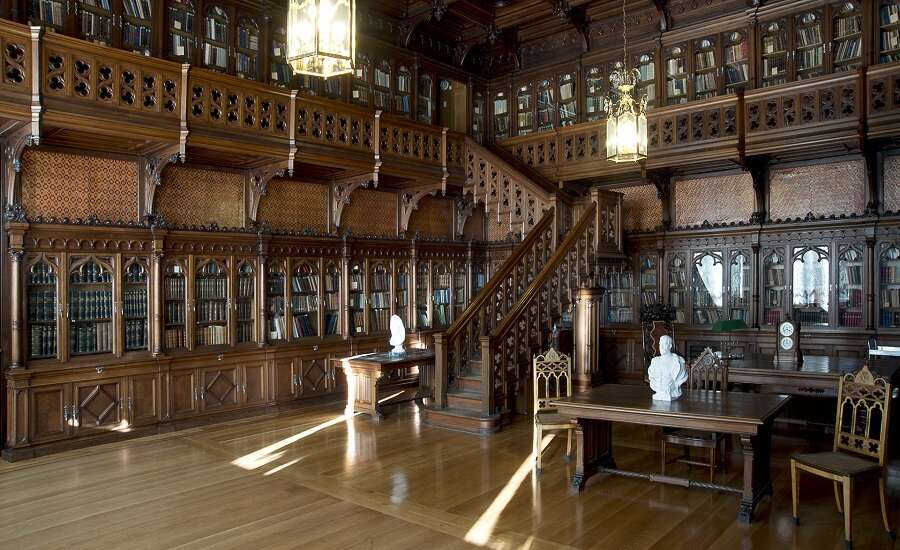 Nicholas II’s personal library, designed in heavy wooden Gothic style and retaining its original decoration. The library contrasts distinctly with the other rooms of the Imperial suites. 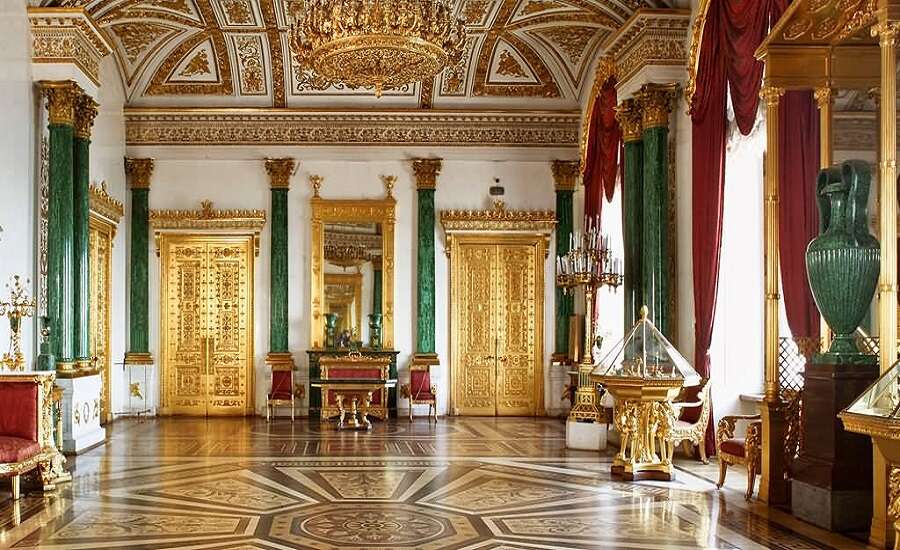 Built for the wife of Tsar Nicholas I and used during official functions, more than 2 tons of precious stones adorn the walls of the Malachite Room. It was later the seat of the Provisional Government, who were ousted from an adjoining room during the Storming of the Winter Palace.

Grand Church of the Winter Palace 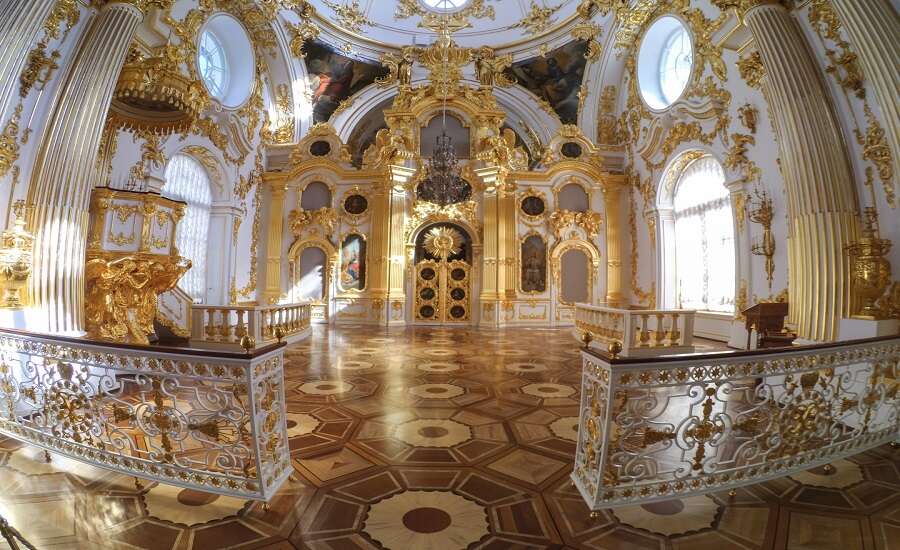 One of the most beautiful and opulent rooms in the Winter Palace, designed by Bartolemo Rastrelli. The church is gilded from top to bottom and has retained its original Rococo decoration despite the 1837 fire. It is no longer an operating church.

Other branches of the Hermitage:

Ticket windows shut half an hour before the museum closes 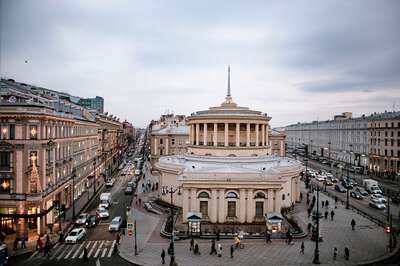 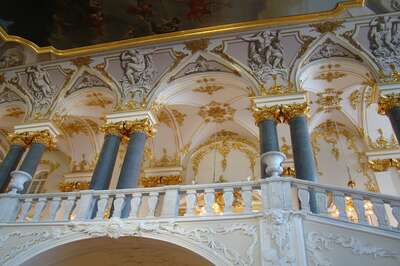 The Hermitage is one of the greatest museums in the world. The museum consists of five historical buildings including the Winter Palace – the residence of the Russian Tsars....