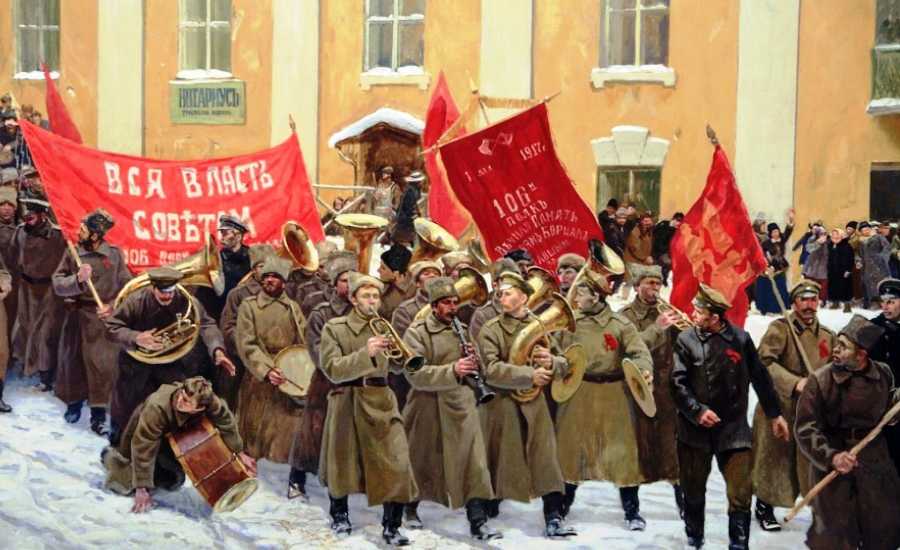 The Russian Revolution in a nutshell 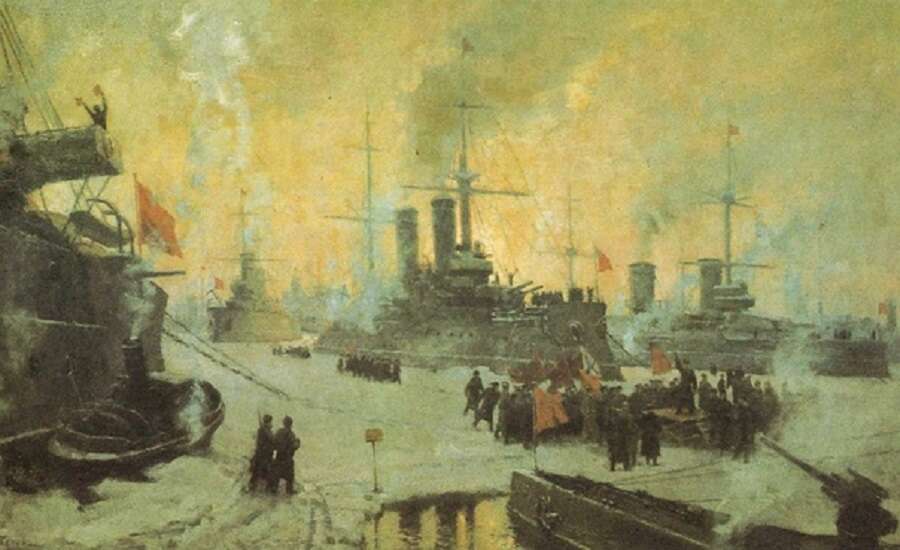 Tsar Nicholas II and his subjects entered World War I with enthusiasm and patriotism, with the defense of Russia's fellow Orthodox Slavs, the Serbs, as the main battle cry. However, the cloak of fervent nationalism only hid the weaknesses of the Russian economy and the inefficiency and corruption in government for a brief time. Military reversals and the government's incompetence soon soured much of the population. German control of the Baltic Sea and German-Ottoman control of the Black Sea severed Russia from most of its foreign supplies and potential markets.

By the middle of 1915 the impact of the war was demoralizing. Food and fuel were in short supply, casualties were staggering, and inflation was mounting. Strikes increased among low-paid factory workers, and the peasants, who wanted land reforms, were restless. Meanwhile, public distrust of the regime was deepened by reports that a semiliterate mystic, Grigory Rasputin, had great political influence within the government. His assassination in late 1916 ended the scandal but did not restore the autocracy's lost prestige. On March 3, 1917, a strike occurred in a factory in the capital Petrograd (formerly St. Petersburg). Within a week nearly all the workers in the city were idle and street fighting broke out. When the tsar dismissed the Duma and ordered strikers to return to work, his orders triggered the February Revolution.

The Duma refused to disband; the strikers held mass meetings in defiance of the regime, and the army openly sided with the workers. A few days later a provisional government headed by Prince Lvov was named by the Duma. The following day the tsar abdicated. Meanwhile, the socialists in Petrograd had formed a soviet (council) of workers and soldiers' deputies to provide them with the power that they lacked in the Duma.

In July, the head of the provisional government resigned and was succeeded by Alexander Kerensky, who was more progressive than his predecessor but not radical enough for the Bolsheviks. While Kerensky's government marked time, the Marxist soviet in Petrograd extended its organization throughout the country by setting up local soviets. Meanwhile, Kerensky made the fatal mistake of continuing to commit Russia to the war, a policy extremely unpopular with the masses. 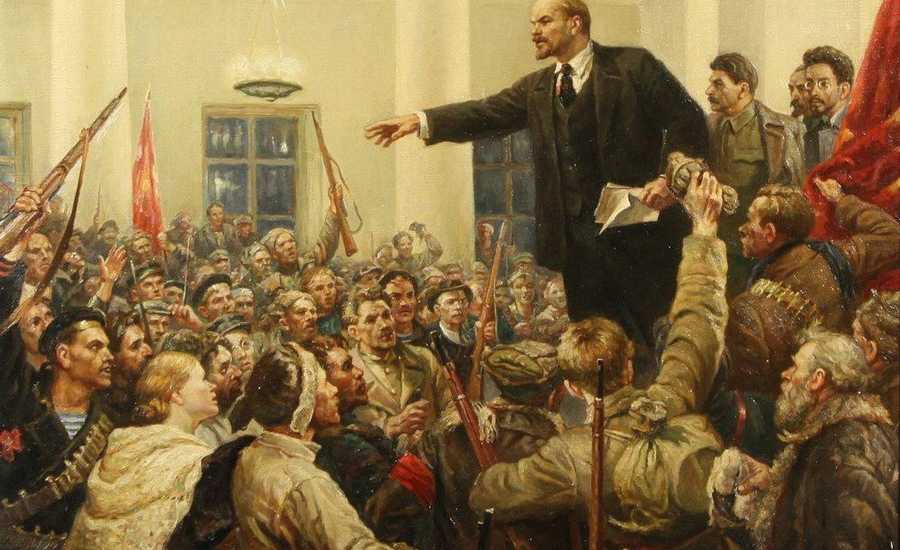 Lenin returned to Russia from exile in Switzerland, with the help of Germany, which hoped that widespread strife would cause Russia to withdraw from the war. A tumultuous reception by thousands of peasants, workers, and soldiers took place as Lenin's train rolled into the station. After many behind-the-scenes maneuvers, the soviets seized control of the government in November 1917, and drove Kerensky and his moderate provisional government into exile, in the events that would become known as the October Revolution.

When the national assembly, which met in January 1918, refused to become the rubber-stamp of the Bolsheviks, it was dissolved by Lenin's troops. With the dissolution of the constituent assembly, all vestiges of bourgeois democracy were removed. With the handicap of the moderate opposition removed, Lenin was able to free his regime from the war problem by the harsh Treaty of Brest-Litovsk (1918) with Germany, with great sacrifice of Russian territory. 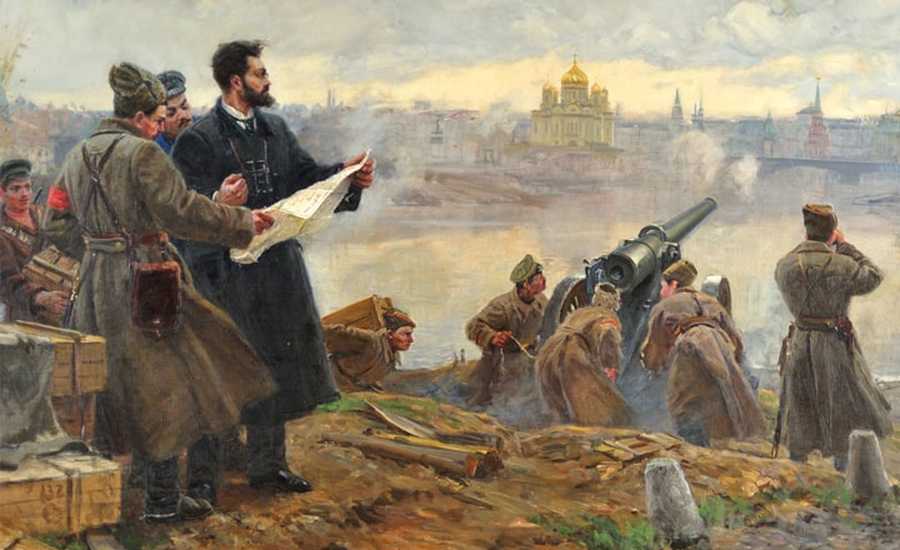 A powerful group of counterrevolutionaries termed the White movement began to organize to topple the Bolsheviks. At the same time the Allied powers sent several expeditionary armies to Russia to support the anti-Communist forces. The Allies feared that the Bolsheviks were in a conspiracy with the Germans because of Brest-Litovsk; they also hoped that the White Russians might renew hostilities against Germany. In the fall of 1918 the Bolshevik regime was in a perilous position, opposed by Russia's former allies and internal enemies.

To counteract this emergency, a reign of terror was begun within Russia as the Red Army and the Cheka (the secret police) destroyed all enemies of the revolution. However lofty their goals were, the Bolsheviks did not have the consent of all elements of society and thus had to force their rule over Russia during the civil war. They swept away the tsarist secret police, so despised by Russians of all political persuasions, along with other tsarist institutions, but ensured the survival of their own regime by replacing it with a political police of considerably greater dimensions, both in the scope of its authority and in the severity of its methods. By 1920 all White resistance had been crushed and the foreign armies evacuated, but at the cost of perpetuating Russia's long pattern of autocratic rule in new forms.

As Russia was bogged down in civil war, the frontiers between Poland and Russia were not clearly defined by the postwar Treaty of Versailles and were further rendered chaotic by the civil war. The Polish-Soviet War (1919-1921), which ended with the defeat of the Red Army, determined the borders between Soviet Russia and Poland.

Read on to learn about the Soviet Russia, WWII, and the fall of the Soviet Union.