Getting Around St. Petersburg

Once you have worked it out, the public transport system in St. Petersburg is incredibly efficient, if not always comfortable. The quickest way to travel around the city is undoubtably by metro, but if you want to actually see the city, experiment with the city’s above-ground transport, which includes a vast system of trams, jolly trolleybuses (some with curtains), hard-working buses and cosy communal taxis, called marshrutki. You can also try your luck with official and expensive taxis, or catch a cheaper ride with a gypsy cab – usually a Lada, and driven by a local looking to make some extra cash. The city’s famous imperial suburbs are well serviced by suburban trains (electrichki) and marshrutki.

If the weather allows it is just as well to forget about public transport and go by foot. No matter how gemütlich the trolleybus or socially enlightening the marshrutka, nothing can beat a reflective stroll along one of the city’s many picturesque canals. 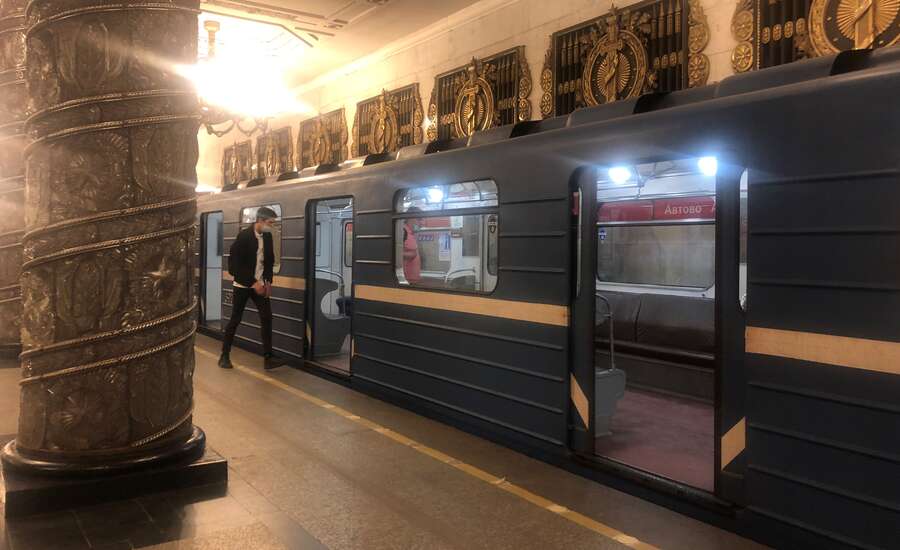 While above-ground transport is generally preferable for short trips around the city centre, visitors should certainly try the metro at least once, especially when travelling further afield. The metro also more than occasionally offers up architectural or design wonders (see for example the centrally-located Mayakovskaya/Маяковская station) and, in peak hours, an insight into the irreproachable manners of St. Petersburg’s residents. If you want to be really well-informed, read our tips on riding the metro.

St. Petersburg has a really great metro system. It is funny, but in Russia, where most things really don't seem to work efficiently, the metro works wonderfully. Trains run every 3 minutes or so and the metro's coverage is quite good.

Don't let the metro intimidate you, it really is no big deal using it and you will be surprised at the beauty of many of the stations – they are really quite fantastic. To find the metro look for signs with a big "M". Remember that in the metro most signs are written in Cyrillic, so best bring a map with you and study the words and letters carefully. The St. Petersburg metro is quite interesting in that it is extremely deep because the city was built on a swamp. So, you end up riding virtually endless escalators down, down, down into the depths of the system. In fact, St. Petersburg is the deepest metro system in the world. Rides cost 12 roubles (about 45 cents). During rush hour, the cars can be quite crowded but during off hours you can usually find a seat. As in most countries, remember, it is always polite to give your seat to an elderly person, middle aged woman or parent with children.

To buy tokens or metro cards, go into the metro station, you will usually see 1 to 3 ticket windows open with short or long lines in front of them depending on the time of day. Stand in line, determine how many rides you will need over the next few days and when it gets to be your turn, ask the lady (in Russian) for a ticket for the amount of rides needed or, if you are in St. Petersburg, tokens that look like coins (called zhetoni – you can also buy tickets but this tends to be more complicated). She will take your money and hand you your change and the ticket. Then, proceed to the turnstiles, insert your ticket, arrow end first in the appropriate place, it goes through the system and pops up at top. When this happens, you can walk through the turnstile. Next, go down the escalator and into the magical world of the Russian metro.

Signs for the stations are written on placards in the center of the hall and along the walls by the track. To understand which direction you need quickly, it is good to know the last stop of the train so you can quickly identify it at the bottom or end of a list (except for the Ring line in Moscow!). Also, if you are in a station that has multiple lines, each line is typically color coded, so if you are looking for the red line, follow the signs written in red. 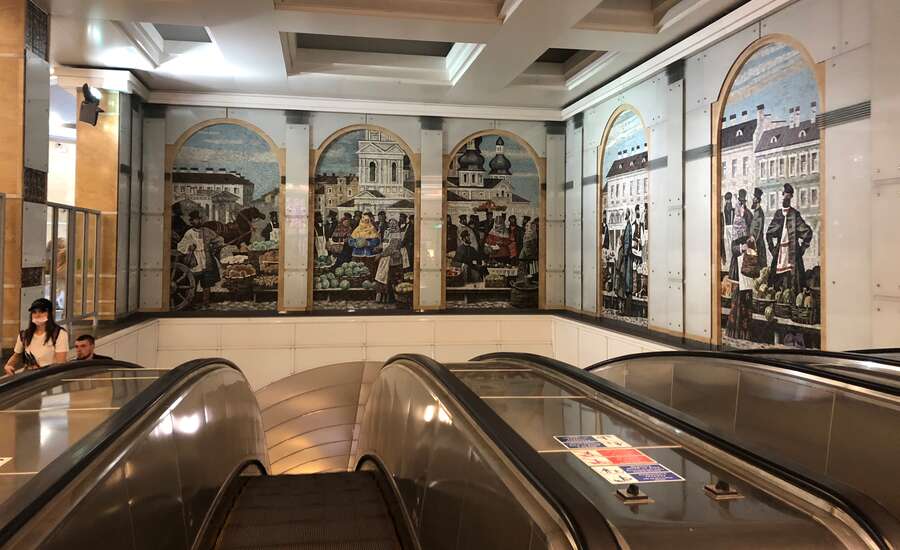 Trains usually come quite often (every 2-3 minutes) and can be very crowded depending on the time of day. After you enter and the doors close, you can look around at all the other happy people riding the train! A recording announces what the next stop will be. It is a good idea to also count your stops if you don't understand Russian.

When it is your turn to get out, exit the train and walk towards the exit of the metro. Remember that if the train is overcrowded, you will find yourself somewhere in the middle of the car but if you want to get out you should ask people around if they are planning to get out at the same station as you. This way, people will know that you want to get off the train and will let you get through. If you are standing in the overcrowded car and don't say anything, you might miss your stop. Frequently, the stations will have more than 1 exit. To find the one that you will need, follow the placards in the hall which have arrows pointing to orientation points for each exit (such as street name or name of shopping center, etc.). Get on that escalator, ride up towards the surface and guess what? You have accomplished what, surprisingly, many foreigners are afraid of – riding the metro.

The metro opens around 6am. In St. Petersburg stations close at 12.

Both Moscow and St. Petersburg are well covered by buses, trolleybuses and trolleys (trams). Tickets for buses, trolleybuses and trams are sold by the conductor and cost 10 roubles; you should keep them till the end of the trip. One ticket is valid for one ride. Many routes tend to be very popular and therefore very crowded. It may be better to take the metro, a taxi or gypsy cab or a "marshrutka" (mini van public taxis). As in most countries, remember, it is always polite to give your seat to an elderly person, middle aged woman or parent with children. 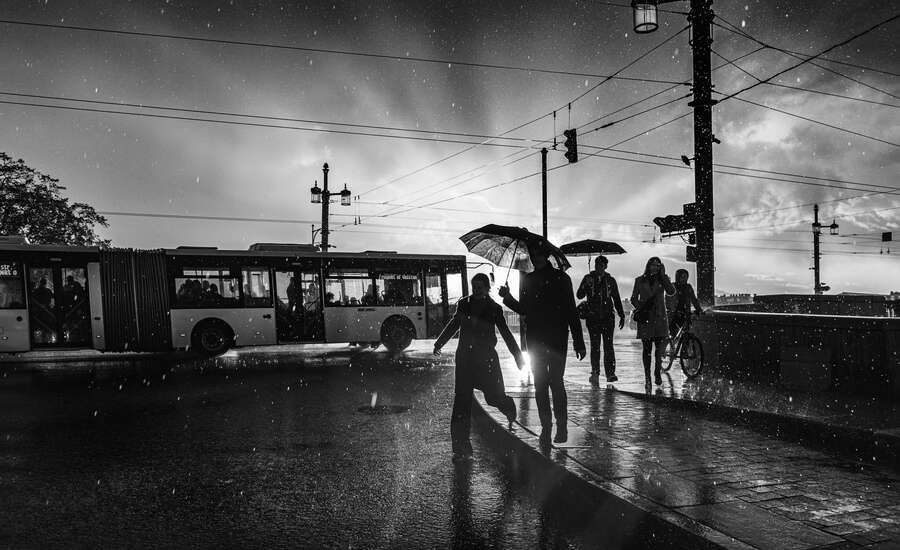 Photo by Bjorn Snelders on Unsplash

Bus stops are identified with the big letter "A" (for avtobus). The buses are slowly getting updated but you can still ride some of the old, cold, smelly ones if you are lucky. Rides usually cost 12 roubles. You can buy tickets onboard from the conductor. 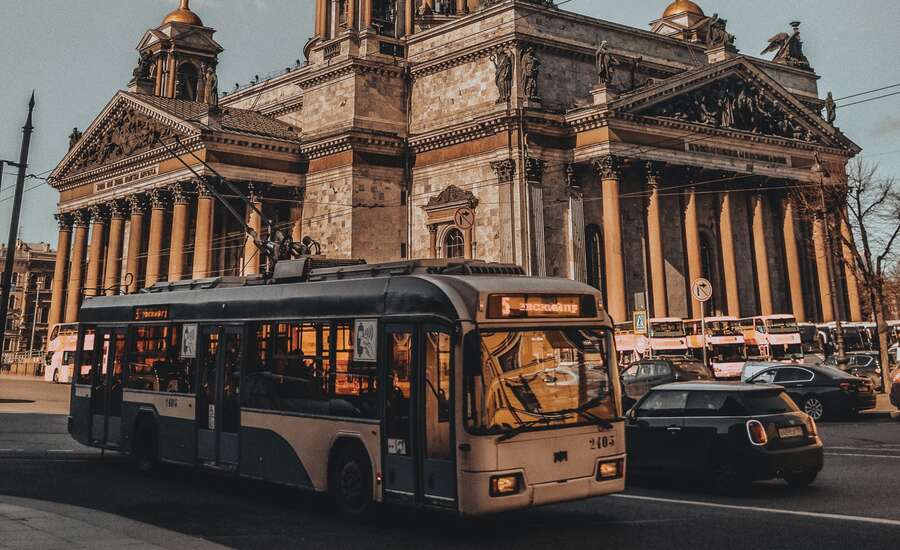 Photo by Daniil Smetanin on Unsplash

Trolley bus stops are identified by the big letter "Т" (trolleibus). Russians really like trolleybuses - they say that they m ore "ecologically friendly" than the regular buses, which I guess is true - it all depends on how you produce the electricity. Some of them have curtains, making for a pleasant, home-like journey (when they're not bursting at the seams and leaking). Rides usually cost 12 roubles. You can buy tickets onboard from the conductor. 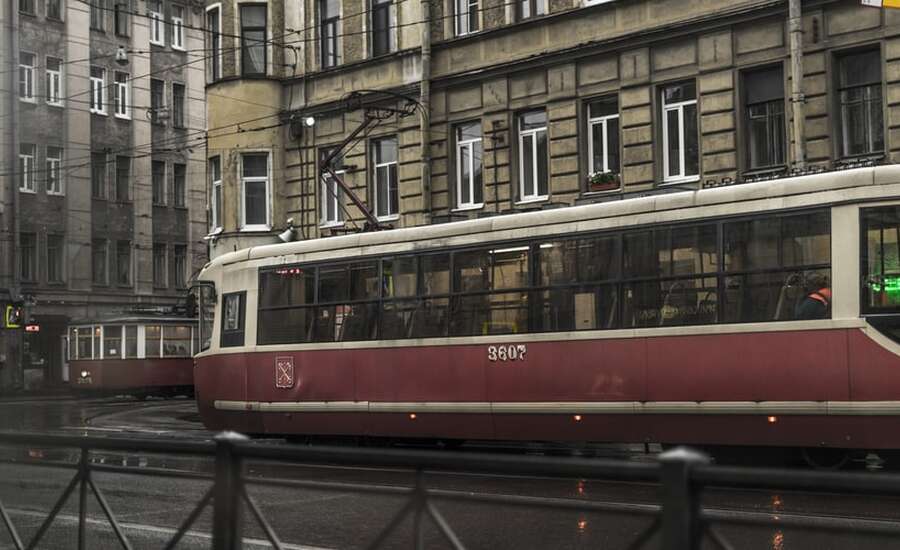 Photo by Ant Rozetsky on Unsplash

Trams are a novel way to get around both Moscow and St. Petersburg. In fact, St. Petersburg has th e largest tram system in the world! It consists of over 400 miles of track and has over 2000 cars. Rail enthusiasts know all about this and frequently make pilgrimages to the city to ride and photograph the trolleys. To find the tram stops look for the "T" (tramvai). The cost of the ride is 10 roubles. You can buy the tickets onboard from the conductor. 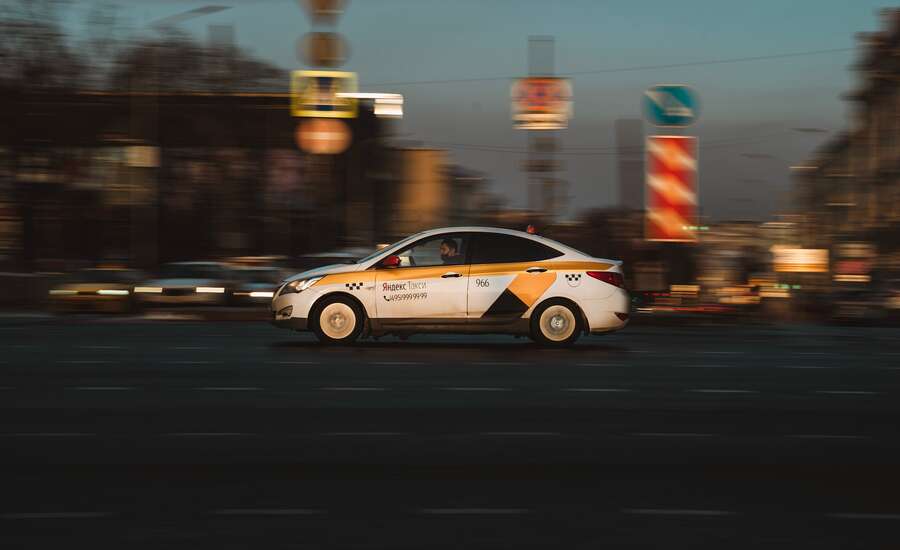 Photo by Vadim Artyukhin on Unsplash

In St. Petersburg and Moscow you will also see taxis all over the place. In these 2 cities, they are usually overpriced - a typical ride for 10 minutes costing approximately 100 roubles ($3.50) and a 20 minute ride costs 200 roubles ($7) or more. In provincial cities the situation is different and the taxis are usually more reasonably priced. As with taxi drivers all over the world, keep track of what they are doing and don't trust the meters so much. It is always better to negotiate the price before you get in rather than relying on a meter. A great alternative to official taxis are gypsy cabs. These are just regular people in their regular cars that are out to make a buck. It is the Russian equivalent of American hitch hiking but in Russia, you always pay. This is how it works; stand at the curb and put your arm out. Cars will begin to stop for you. As with taxis, always negotiate the price beforehand. Also, be a little careful, it is best to not get into a car with more than 1 man in it or to get into a car with suspicious looking characters. Furthermore, if you are a single female, it's better to call or flag an official taxi if traveling at night just to be on the safe side. 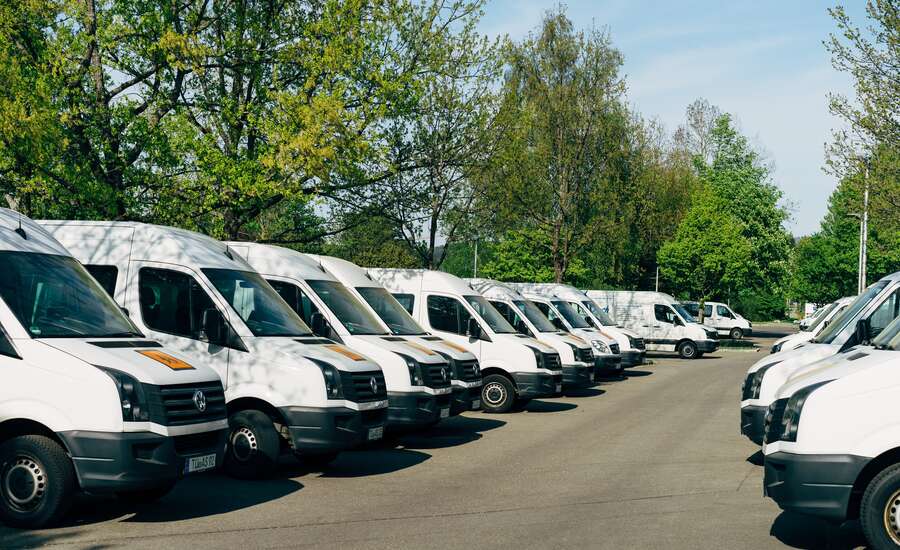 Photo by Markus Winkler on Unsplash

There are many mini van route taxis called marshrutki around the cities, and a ride costs from 10 to 30 rubles. These are much more comfortable and efficient vs. the typical above ground public transport. Again, their routes are all written in Russian so study them well before getting on. The best way to find out if the bus is going your way is to simply stop it, open the door and ask if it goes to the place that you need to reach. In this case you just need to know the name of the place or the street where you are going. These mini vans usually stop at official stops such as metro stations and near regular bus or trolley stops but you can also flag them down. You see them all over the place - just stick out your hand and wave. When you get in hand the driver the fare and go. 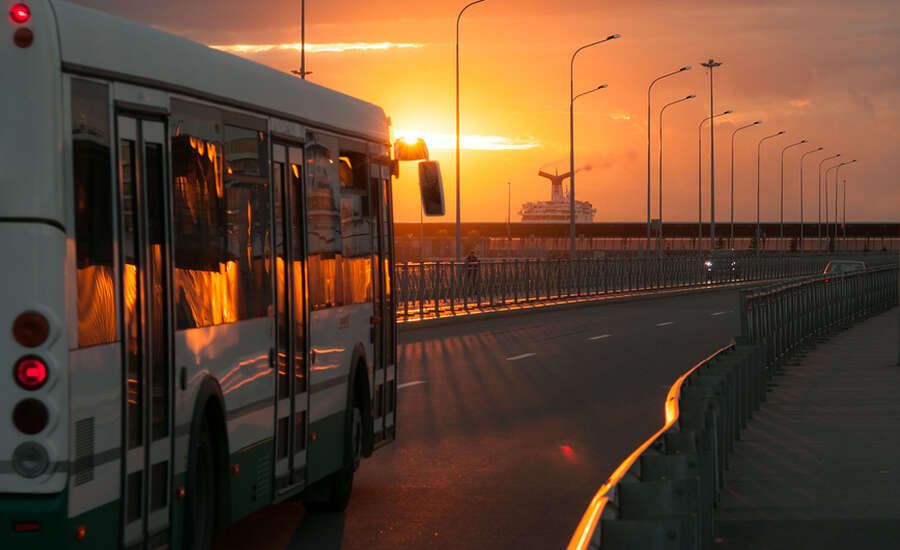 St. Petersburg Sea Port has 75 berths (11302 meters long) capable to receive ships up to 260 m long, with the draught up to 11 m. The length of passenger terminals exceeds 1700 meters.

"The Scheme for Finnish Bay Coast Zoning with proposals on development of the existing and new port regions" approved by the Russian Government stipulates the increase of cargo turnover up to 60 mln tons by the year of 2010.

River transport infrastructure of "North-West Shipping Company" comprises a number of objects located in Leningrad, Vologda and Novgorod Oblasts, including 7 ports, 3 shipyards and repair yards as well as maintenance facilities.

October Railway Company (OZhD) possesses over 420 km of railways within the city boundary and 340 approach rails to industrial enterprises.

The total length of streets and roads in St. Petersburg exceeds 3.3 thousand km, with total hard pavement area of over 53 mln m2. There are 405 bridges, 35 overpasses, 25 tunnels, including one under the Sea Canal, and 152.5 km of embankments.

The major part of intracity and suburban public conveyances is carried out by transport of general use that is supplied by the following companies:
Metropoliten (GUP "Peterburgsky Metro-politen"),
Land electrotransport - trams and trolleybuses (GUP "Gorelectrotrans"),
Buses - social and commercial routes served by over 40 state-owned companies, joint stock companies and private entrepreneurs,
Local electrified trains (GUP "Transcom").

Besides, 1500 taxis are working in St. Petersburg, with a net of taxi stops at the most passenger-intensive junctions of the city. 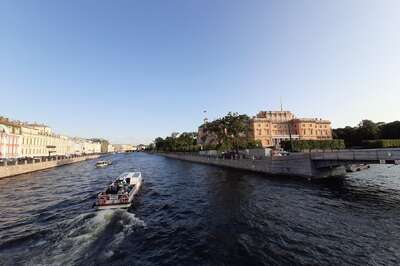