What is the history of the St Nicholas Naval Cathedral? 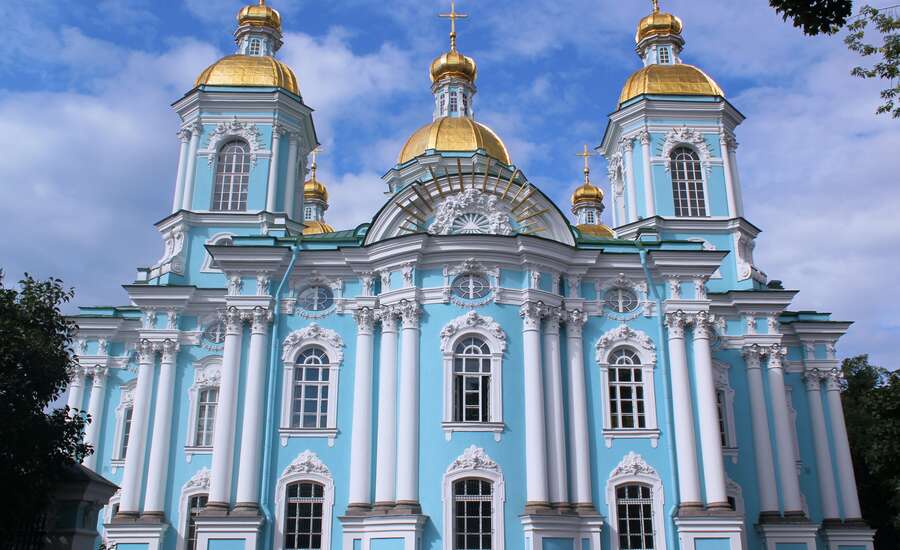 Photo by Dušan veverkolog on Unsplash

The St Nicholas Naval Cathedral is dedicated to the glory of the Russian fleet, and recognisable for the golden cupolas crowning its sky-blue walls. Tucked away in a quieter area of the city and encircled by waterways and historic streets, the cathedral is not only a historical and religious monument, but one of the most beautiful and romantic spots in St Petersburg.

As Russia’s naval capital, St Petersburg was centred around the Admiralty shipyard, and various churches were built nearby in the early 1700s to serve the shipyard’s workers and officers. This included a small chapel established on the outskirts of the new city, which was beautifully decorated and consecrated in honour of St Nicholas the Wonderworker, patron saint of sailors. The chapel was replaced by a wooden church in 1743, and then by a stone church in 1752, constructed on the initiative of Prince Mikhail Golitsyn and Empress Elizaveta Petrovna to honour the glory of the Russian fleet. The construction of the cathedral was entrusted to Savva Ivanovich Chevakinsky, and it was erected between 1753 and 1762.

Did you know? As the St Nicholas Naval Cathedral sits close to four waterways – the Fontanka and Moyka Rivers, and the Kryukov and Griboedov Canals – it was built on a high foundation to prevent flooding.

Empress Catherine the Great cemented the important role of the St Nicholas Naval Cathedral, ordering that thanksgiving services to celebrate naval victories were to be celebrated there. The ceremonies organised at the Naval Cathedral by Catherine the Great were grand spectacles, complete with naval parades, cannon salute and fireworks. Catherine also gave 10 gold-cased icons to the cathedral, each in honour of a special battle which took place on the saint’s name-day. 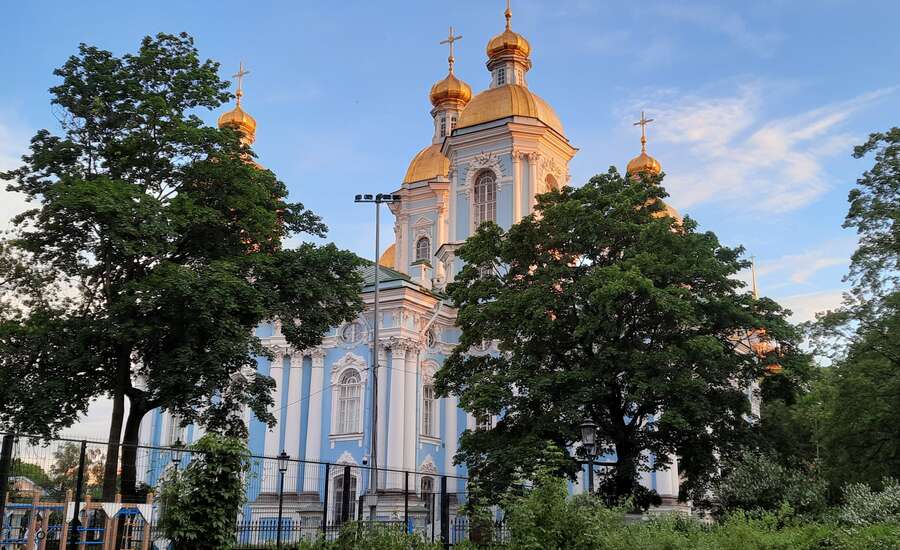 From the beginning of the Soviet period, the St Nicholas Naval Cathedral was under continuous threat from the authorities. Though it was initially transferred to the parishioners, between 1922 and 1924 the Naval Cathedral was controlled by the pro-Soviet ‘Revisionist’ faction of the Orthodox Church, its valuables were seized or looted, the old clergy were persecuted, and the building fell into disrepair. Further persecution of the 1930s led to the removal and melting of the Naval Cathedral’s 13 glorious bells.

Did you know? By 1941, there were no more than 20 surviving priests in the Leningrad Diocese.

Even in the face of continuous oppression the St Nicholas Naval Cathedral did not cease its activities, which became more prominent during the Second World War. Services were held twice daily regardless of bombing raids, and the cathedral became a mobilisation centre in the fight against the Nazis. To protect it from bombardment, the St Nicholas Naval Cathedral was disguised with netting and khaki paint. Over the course of the war, more than 4,700,000 roubles were collected by the cathedral for the war effort, more than any other church in Russia except the Yelokhovsky Cathedral in Moscow.

Did you know? Six members of the St Nicholas Naval Cathedral’s clergy, including the Metropolitan Alexey, were awarded the Soviet state medal ‘For the Defence of Leningrad’.

Towards the end of the Soviet period, the community of parishioners grew steadily, and by the end of the 1980s the clergy were able to continue their spiritual, educational, and charitable activities. Today, the St Nicholas Naval Cathedral holds regular services and maintains its close connection to the naval community of St Petersburg.

Did you know? The cathedral continues to perform memorial services in the case of naval accidents, including an annual service commemorating the Kursk nuclear submarine disaster of 2000.

What can you see at the St Nicholas Naval Cathedral? 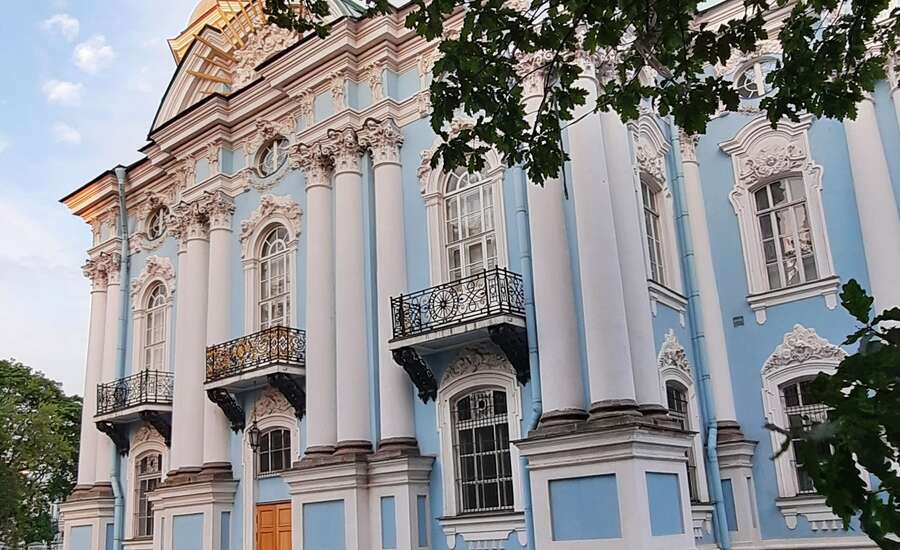 The St Nicholas Naval Cathedral has been beautifully preserved for two and a half centuries. Savva Chevakinsky’s five-domed design marked a return to traditional Orthodox architecture, and is merged with Elizabethan Baroque style which lends the cathedral an opulent appearance. The Naval Cathedral was built in the form of an equal-sided cross overlaid with a square, its corners and centre crowned with tiered towers and golden cupolas. The sky-blue walls of the cathedral are punctuated with balconies and white Corinthian columns, rendering it more similar to a palace than a church!

The Upper Church of the St Nicholas Naval Cathedral is consecrated in honour of the Epiphany. The interior is palatial, and large enough to accommodate 5,000 worshippers. White Corinthian columns and arches are embellished with carvings, gold-framed icons line the walls, and copper chandeliers hang from the ceiling. The Imperial Russian coat of arms adorns the central dome. Also present are memorial plaques with the names of fallen sailors.

The best painters in St Petersburg, the Kolokolnikov brothers, were commissioned to fill the ornately carved iconostasis created by master Ignatiy Kanaev; their icons merged traditional techniques with secular Western European painting styles. The Upper Church’s iconostasis glorifies the Russian state, showcasing patron saints of Russia’s tsars and tsarinas, and even an image of St Peter with the likeness of Peter the Great. Columns and vines frame the iconostasis, and the royal doors leading through the iconostasis resemble golden lace.

Opposite the iconostasis is the Tsar’s Place where the Russian emperors prayed, which is decorated with red velvet. From the pulpit, royal decrees and announcements of victories of the Russian fleet were read.

The Lower Church has a more austere appearance but is no less impressive, with vaulted ceilings and remarkable icons painted by the Kolokolnikov brothers covering the walls. The main shrine of the church is dedicated to St Nicholas the Wonderworker, and houses his relics (donated by the Metropolitan of the Lebanese Mountains) alongside a 17th century icon of St Nicholas (donated by Greek soldiers). The northern altar was consecrated in honour of St Demetrius of Rostov and St Theodosius of Chernigov, and the southern altar in honour of the Beheading of St John the Baptist.

To the west of the cathedral lies the bell tower, an elegant, four-tiered Baroque structure crowned with a golden spire, which is one of St Petersburg’s landmark buildings. A small chapel is located in the lower tier, and a clock sits on the upper tier.

Surrounding the cathedral are a small square and garden, bordered on two sides by rivers and offering picturesque views. There are plenty of benches under the trees and along the riverbanks, making this a peaceful place to relax. It is especially beautiful in autumn when the golden leaves contrast the cathedral’s sky blue walls.

Did you know? Next to the cathedral is the Pilakov Bridge, which reaches over the Griboedov Canal. It is also known as Semimostye, as from here you can see seven different bridges! According to local legend, you should turn clockwise and look at every bridge in turn before making a wish (for extra luck, make your wish on the 7th day of the month at 7 o’clock!) 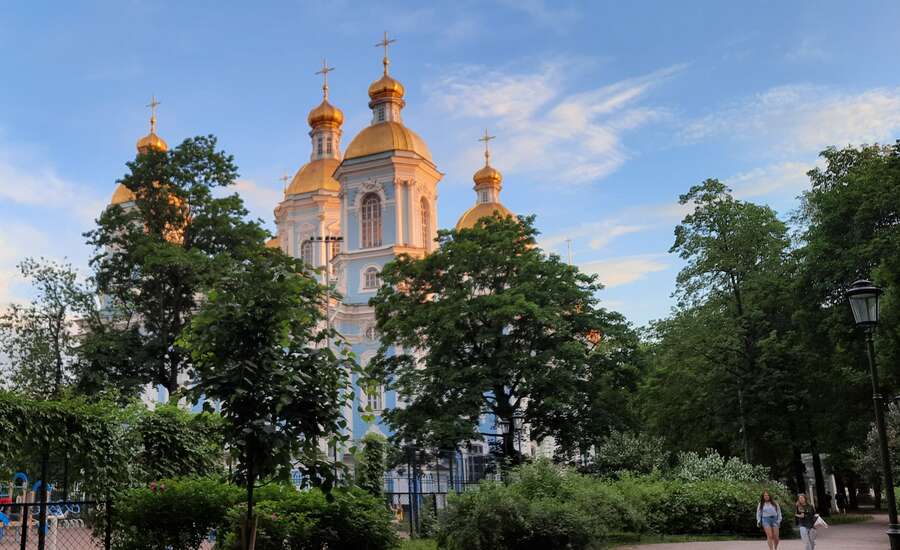 Mariinsky Theatre: St Petersburg’s largest theatre, famous all over the world for its ballet and opera performances, with an opulent interior fit for a king.

Riverside walks: Take a walk along the nearby Fontanka and Moyka Rivers or the Griboedov Canal, to experience the splendour of the ‘Venice of the North’.

Yusupov Palace: Once the residence of the wealthiest family in Russia, the Yusupovs, and most famous for being the location where mystic monk Grigory Rasputin was murdered.

Yusupov Gardens: An oasis of green with a picturesque lake, small islands, and plenty of tree-lined paths, which is home to another of the Yusupov family’s many palaces. 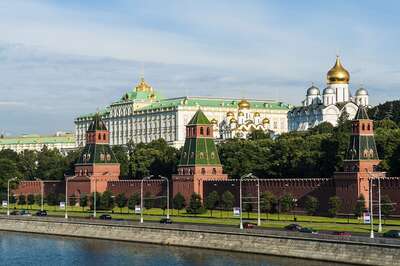