History of the Yusupov Palace

The Yuspov Palace during Imperial Russia 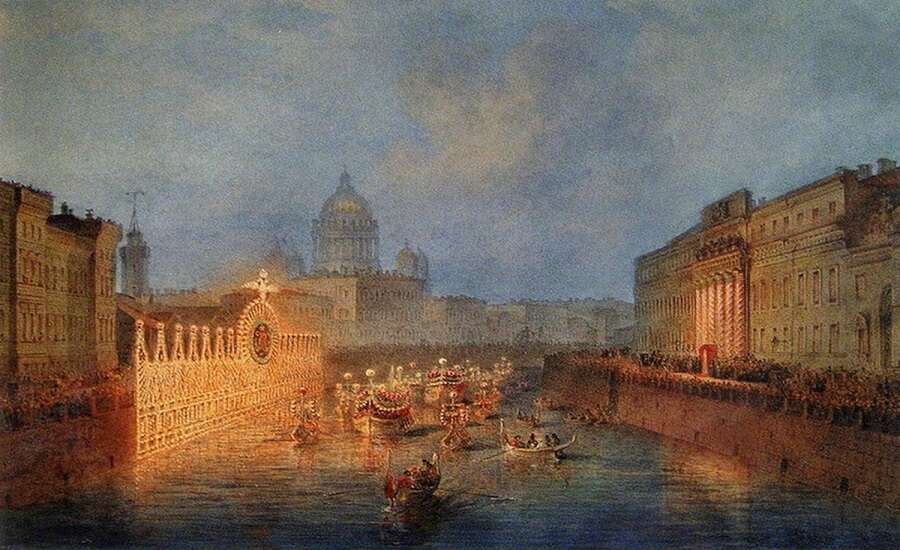 The Yusupov Palace was originally a small wooden building constructed in the early 1700s for Peter the Great’s niece, Princess Praskovya. After changing hands between various members of the royal court and their families, it was finally purchased by Prince Boris Yusupov in 1830. His family were extremely well respected, trustworthy associates of the imperial family.

Did you know? In total, the Yusupov family owned a staggering 57 palaces!

5 generations of the Yusupov family resided in the palace for nearly 90 years, and during this time held luxurious balls and receptions for St Petersburg’s high society. The palace’s most marvellous interior design and architecture was constructed under the Yusupovs – a ceremonial staircase leading to the River Moyka, elaborate banquet halls and ballrooms, Baroque-style theatre, and art gallery to showcase the family’s lavish collection of 1,200 artworks. Even before the turn of the 20th century, the palace was equipped with running water, electricity and central heating.

Did you know? It is said that at one point, the Yusupovs were richer than the Tsar, with assets totalling more than 1 billion roubles – an unimaginable amount of money in those times.

Dark history haunts the halls of the Yusupov Palace. While Tsar Nicholas II was away at the front during the First World War, Tsarina Alexandra stayed in St Petersburg. She fell increasingly under the influence of Grigory Rasputin, a mystic who she believed to possess great healing powers. Members of the imperial court didn't trust Rasputin and felt that he threatened the stability of the Russian Empire.
Prince Felix Yusupov, Grand Duke Dmitri, Duma deputy Vladimir Purishkevich and other conspirators soon plotted his downfall. Rasputin was invited to the Yusupov Palace on 16th December 1916, and went despite prior warning that his ‘enemies are bent on mischief’. The events of the evening are shrouded in mystery. It’s reported that Rasputin did not die from eating cream cakes and wine laced with cyanide, nor from subsequent gun shots, nor from being battered over the head with a dumbbell. Eventually, the conspirators threw him in the frozen River Neva.

The Yusupov Palace during Soviet Russia 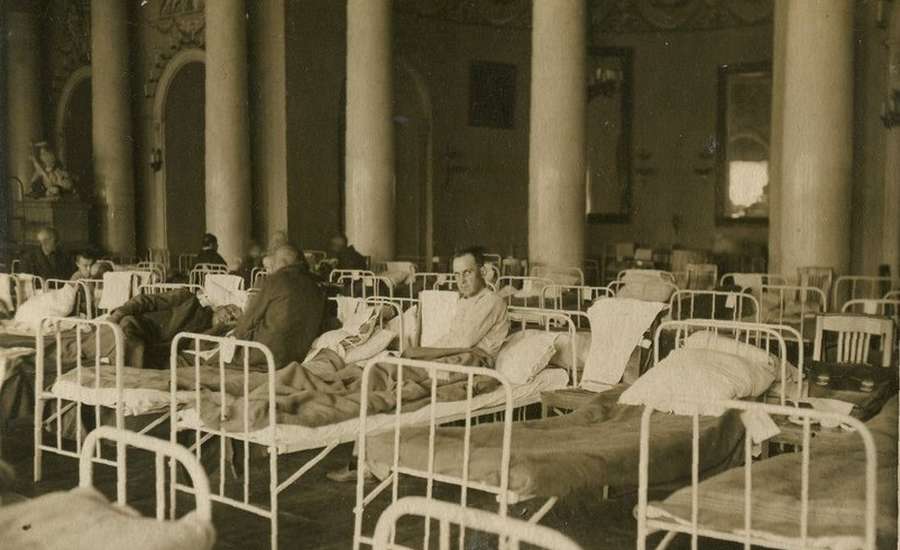 The October Revolution soon swept the Yusupov family out of Russia. The family’s art collection was nationalised (many pieces were moved to the State Hermitage or Russian Museum), and the Yusupov Palace was fittingly converted into a museum about the lifestyle of the nobility. The palace complex was given to the education authorities and Leningrad’s teachers helped contribute towards its upkeep.

Did you know? All that the Yusupov family were able to smuggle out of Russia were the family jewels and a few of Rembrandt paintings.

During the Second World War, the Yusupov Palace’s halls accommodated a military hospital. Although many of the rooms were severely damaged by artillery shelling, conservation and restoration works began whilst the war was still ongoing, and a large-scale programme was implemented in the post-war period to renovate the entire palace both inside and out.

What can you see at the Yusupov Palace today?

The Yusupov Palace is remarkable for its truly gorgeous interiors. Frescoes, carvings, marble, Venetian mirrors, gilded chandeliers, stained glass, tapestries and superb sets of furniture are all part of the magnificent decor of the palace. There are various tours available at the palace, or you can book one of Express to Russia’s excursions.

Did you know? The Yusupov Palace is known as an ‘encyclopaedia’ of St Petersburg’s aristocratic interiors. Its rooms synthesise a great number of different styles, channelling a different atmosphere in each one. 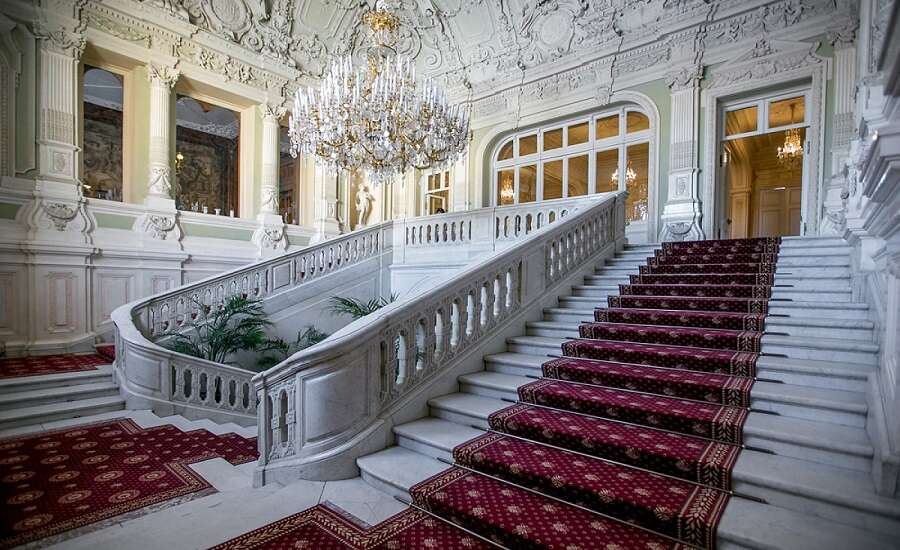 This sweeping staircase gleams with white marble and is adorned with statues, a magnificent chandelier, and intricate ceiling moulding. 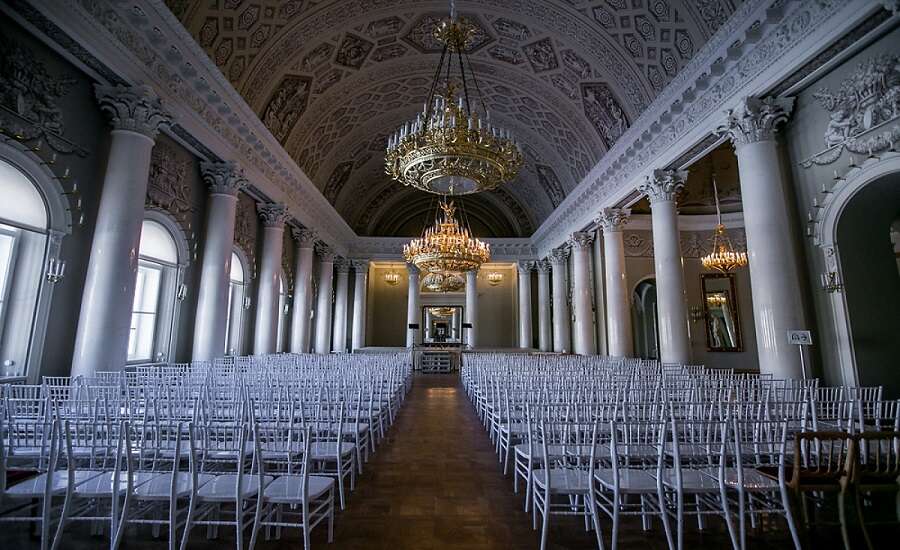 A banquet hall lined with a Corinthian colonnade, vaulted ceiling and carved architraves. At nearly 450 square metres in size, it is by far the palace’s biggest hall and was perfect for the splendid balls thrown by the noble family. 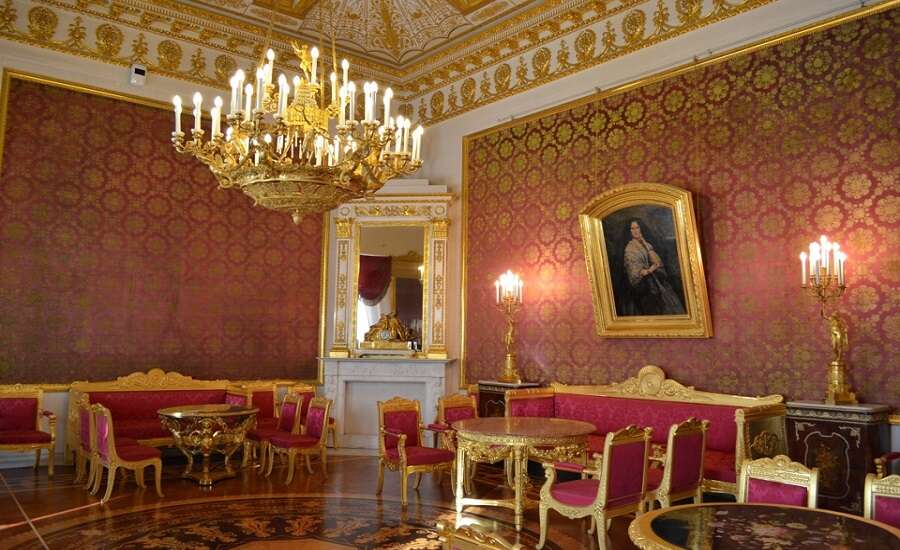 Each one is executed in a different style. The atmospheric tapestry room comprises heavy wooden décor and an enormous tapestry covering one wall. The big living room is brightened with varying shades of green and adorned with natural motifs. The red living room is richly decorated with deep red and gold and an elaborate parquet floor. The musical living room is light and airy, with gilded features and crystal chandeliers. The Yusupov family stored their violin collection here, including a priceless Stradivarius. 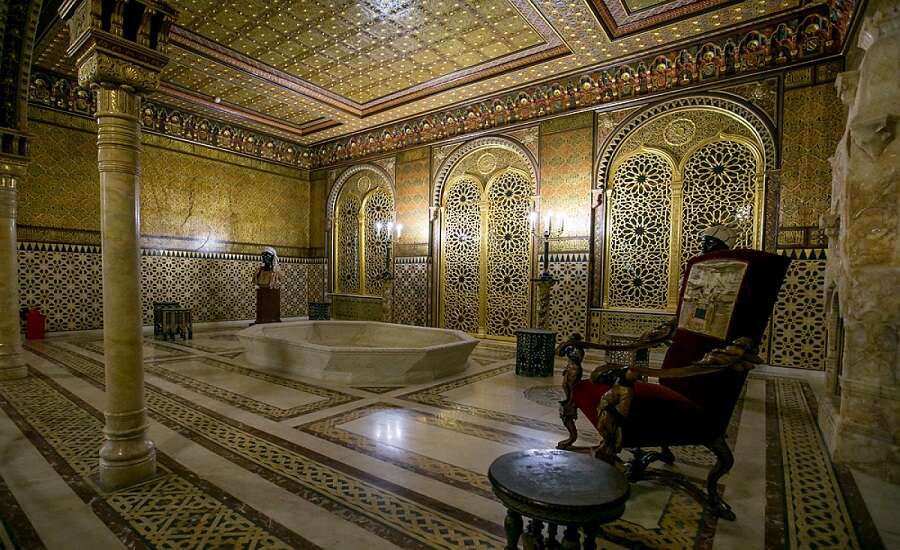 Stands in contrast to the distinctly European interiors of the palace’s other halls. The Moorish living room channels Islamic décor and architecture, with ornately carved arches and complex geometric patterns in brown, red, blue and gold.

Did you know? The Islamic design of this room was not merely whimsical. The Yusupov family was in fact descended from Sultan Yusuf, chief of the the Nogai Horde (a Mongol-Turkic tribal group). 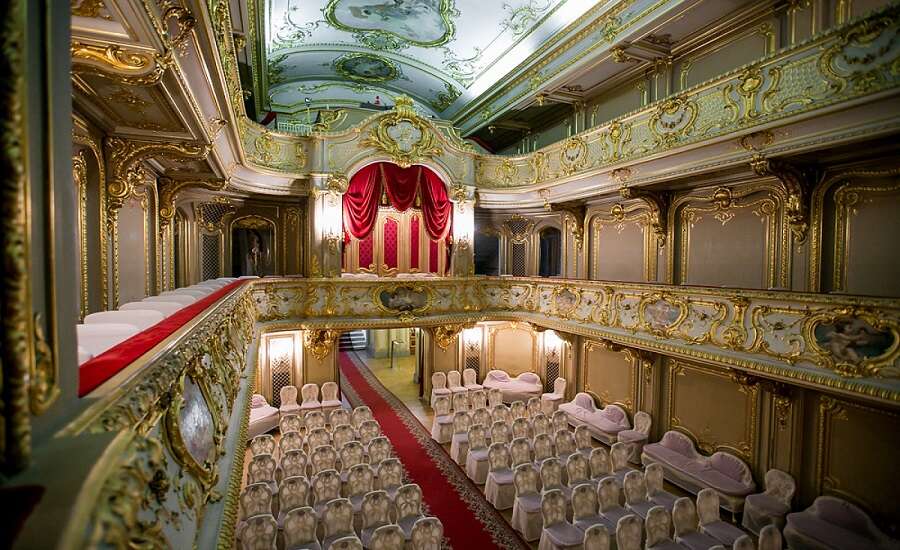 The Baroque theatre is a veritable jewel-box, with gilded motifs snaking around the walls, ceiling and stage, plush red curtains and carpets, and an enormous ceiling fresco. Concerts, opera, ballet and theatre performances are still held here today. 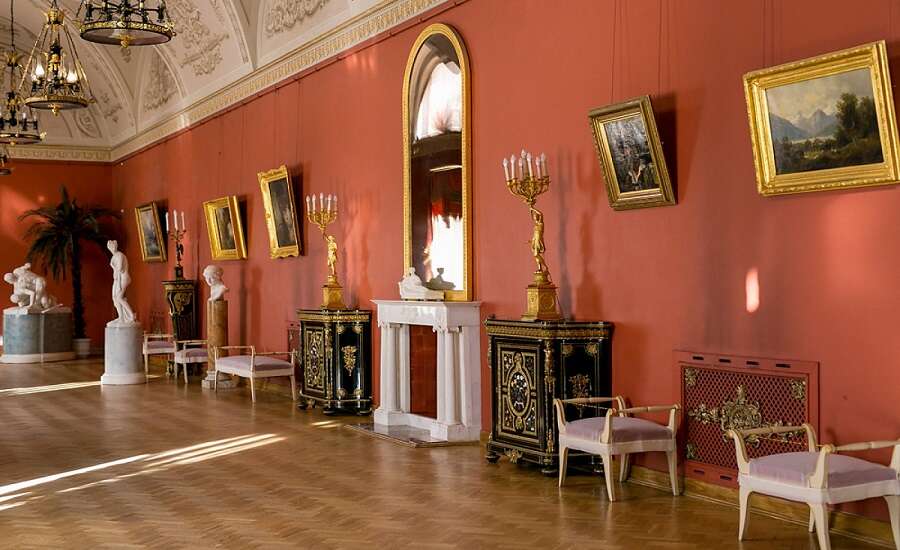 Houses the artworks of the Yusupovs’ collection which were not requisitioned for the Russian Museum or State Hermitage, including paintings, sculptures, tapestries and furniture.

Did you know? Prince Nikolai Yusupov, father of Prince Boris, was a patron of the arts who started the family’s art collection. In fact, Prince Nikolai was responsible for collecting artwork for the royal family, to be placed in the Hermitage in the Winter Palace! 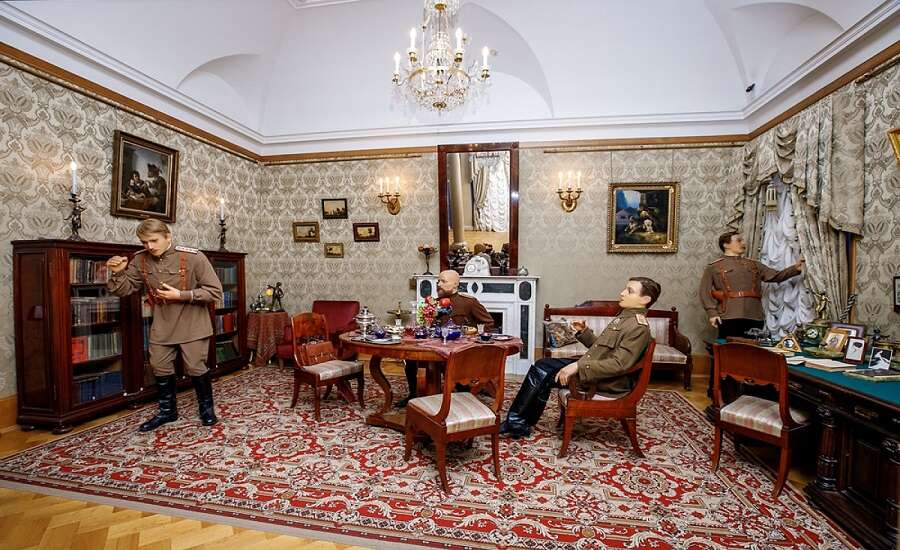 As the location of Rasputin’s infamous murder, special tours are organised in the Yusupov Palace to familiarise visitors with its dark history. As well as a general guided tour of the palace, visitors can see the basement room where events unfolded and learn about the murder and subsequent investigation.

Stroll in the Yusupov Palace Garden 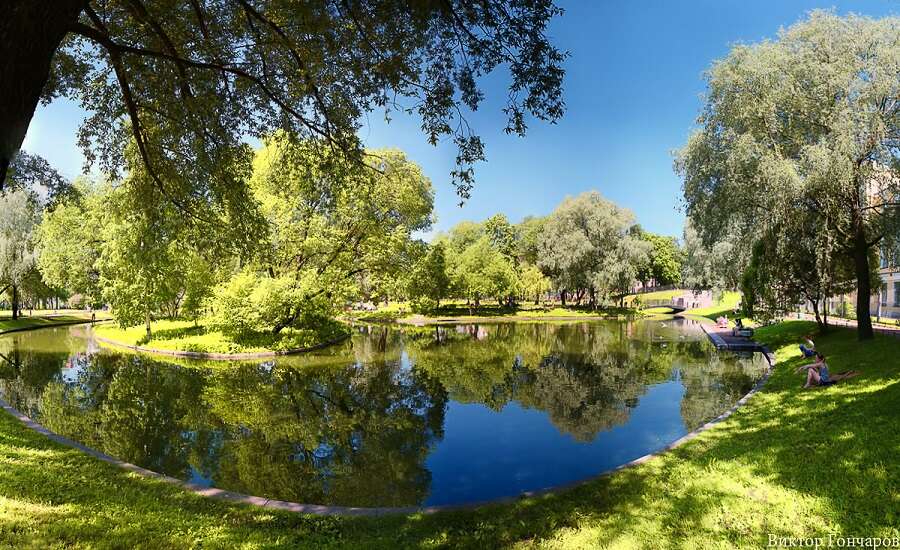 Photo by Виктор Гончаров from http://fotokto.ru/

Next to the palace is a small garden which can be accessed from the palace’s central courtyard. This is not to be confused with the much larger ‘Yusupov Garden’, located approximately 1km away.

Opening hours
The Yusupov Palace is open every day from 11:00 – 18:00. Ticket desk opens at 10:30 and closes one hour prior to the end of the day.
Visit the website to find opening hours for specific excursions, theatre performances and other events. 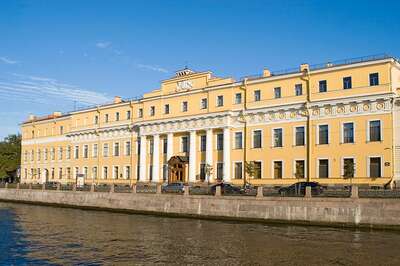 This is an extremely interesting palace excursion and St. Petersburg tour. The building is notable both for its beauty and for the historical events that have taken place within...