History of the Russian Museum

The Russian Museum during Imperial Russia 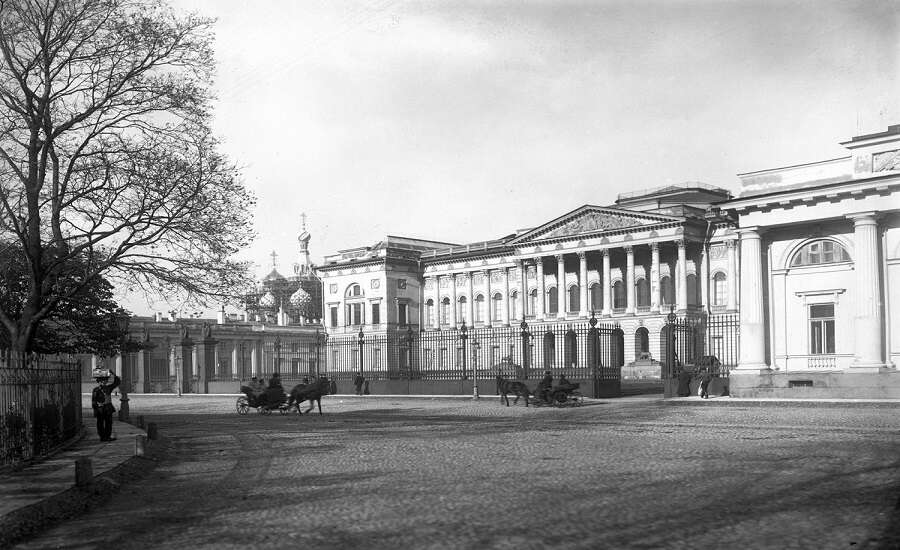 Tsar Alexander III was extremely fond of art. He studied painting and collected a vast number of artworks of all disciplines. Towards the end of his life, Alexander decided to set up a public museum to showcase the talent of Russia’s artists. This was a feat of patriotism, as although Russia already had a number of celebrated galleries and museums, none of them were solely dedicated to Russian art.

Did you know? It is alleged that Alexander III decided to found the museum after acquiring Ilya Repin’s famous painting ‘Nikolay Mirlikiisky saves three innocent prisoners from death’.

Alexander unfortunately died before realising his ambition. The Russian Museum was properly founded in 1895 by his son Tsar Nicholas II, who named it ‘The Russian Museum of Alexander III.’ To house his father’s collections, Nicholas acquired the magnificent Mikhailovsky Palace, built by Carlo Rossi in 1825. The palace was constructed in Empire style, bordered by landscaped gardens, and its magnificent façade fronted by a huge colonnade and sweeping granite steps.

Did you know? The artworks at the Russian Museum were supposed to remain there permanently, and never be lent to another museum.

The Russian Museum began with a collection of 1,880 artworks transferred from the Academy of Arts, the palaces of Gatchina and Tsarskoe Selo, and the State Hermitage, as well as 5,000 ancient monuments. It opened its doors to the public in March 1898, and over the next decade the museum’s collection doubled in size.

Did you know? The Russian Museum’s first staff included some of Russia’s most esteemed scientists, architects, historians and archaeologists.

The Russian Museum during Soviet Russia After the October Revolution, the Russian Museum grew exponentially thanks to the nationalisation of private art collections of the royal family and aristocracy, and the requisition of valuables from the Orthodox Church and antiques shops all over the country. In fact, the collection became so large that new wings had to be added to the museum complex. Exhibitions were organised to educate people about the latest artistic movements in Soviet Russia, bringing the museum more in line with the regime’s principles.

By the outbreak of the Second World War in Russia, there were over 166,000 exhibits at the Russian Museum. Staff immediately sprang into action to save the collections from damage. The museum was closed, and its most precious exhibits were prepared for evacuation, swaddled with paper and fabric and carefully packed into boxes. Some paintings were so enormous that it took a team of dozens of staff to pack each of them up!

Over 25,000 artworks were painstakingly transported first by train to Gorky (Nizhny Novgorod), and then on to Molotov (Perm) by boat. Considering that Russia’s transport links were solely dedicated to moving troops and supplies for the war effort, this indicates the importance of the Russian Museum’s collection in the national consciousness.

Did you know? Some sculptures were so enormous that evacuation was not an option. To protect a sculpture of Empress Anna, the staff dug a large pit, lowered the statue into it, then covered the ground above with a flowerbed. A monument to Alexander III was too big even for this – it was covered with sand and earth and sown with seeds so that it became a grassy hillock. Despite being directly hit by a bomb, the monument survived!

Leningrad’s inhabitants joined the effort to pack up the exhibits and protect the museum even through bombing raids and starvation. Many of them lived in the museum’s cellar with their families. Despite the destruction of the war, the museum staff continued their work, wrote articles, held lectures at hospitals and military bases, and even completed PhD dissertations.

Did you know? The Russian Museum reopened on 9th May 1946, exactly one year after the war ended in Russia.

What can you see at the Russian Museum today? An outstanding exhibition of work from the artistic centres of ancient and medieval Russia. This includes 6,000 icons, such as those by Russia’s most famous icon painters, Andrey Rublev and Simon Ushakov, as well as the oldest surviving Russian image of the Virgin Mary, and the first icons depicting a Russian saint. 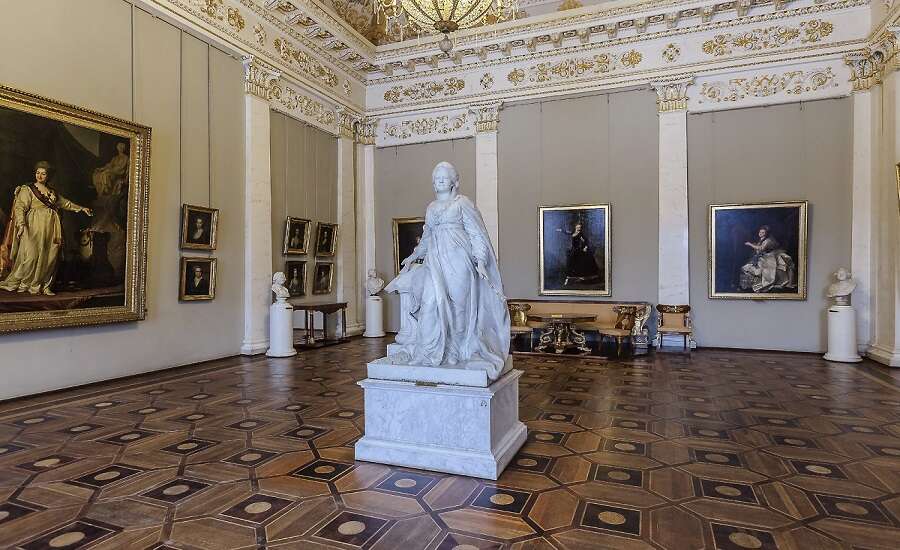 This exhibition of paintings, sculptures, and decorative and applied art showcases the artistic development of 18th century Russia. There is a particularly captivating range of portraits depicting members of the imperial family and court, and impressive mosaics from the workshop of Mikhail Lomonosov, some of the first ever created in Russia. The main artistic trends of the 19th century, Romanticism and Realism, are represented here. This includes the paintings of artists including Karl Bryullov, Sylvester Shchedrin and Ivan Aivazovsky, and the work of renowned sculptors such as Boris Orlovsky. A separate section showcases the masterful work of the Peredvizhniki, a group operating in the latter part of the 19th century who rejected western European Classicism in favour of socially aware Realism. Artwork by its members, such as Ilya Repin, Isaac Levitan, and Ivan Shishkin, is displayed here. 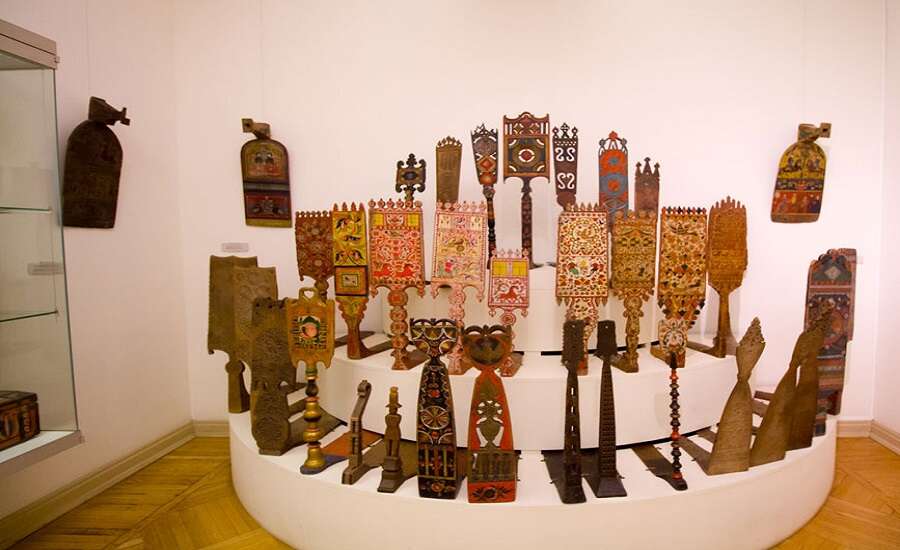 A fascinating exhibition displaying Russian art at the turn of the 20th century. As well as examples of Modernist, Neoclassical, and Realist artwork, it features the majorly influential Mir Iskusstva movement. This movement encompassed a huge variety of artistic styles, and the exhibition includes pieces by Boris Kustodiev, Alexandre Benois, Nathan Altman and Leon Bakst. Chronicling the key points of 20th century artistic development, with particular focus paid to the work of avant-garde artists such as Natalia Goncharova, Kazimir Malevich, and Vladimir Tatlin; alongside their artwork are over 20 films about the artists’ lives. Other sections are dedicated to the progression of Soviet art during the 1920s and 1930s, art from the Second World War, and the work of non-conformist artists from the death of Stalin until perestroika.

Decorative and applied art of the 20th century Over 400 works of art are displayed here. Particularly fascinating pieces include ceramics and glasswork from the pre-revolutionary to the Soviet periods, with revolutionary agitprop ceramics and Suprematist porcelain by artists such as Kazimir Malevich, and propaganda textiles celebrating the principles and achievements of Soviet Russia. The Russian Museum is bordered by the verdant and peaceful Mikhailovsky Garden, beautiful in every season. The garden is a combination of French and English landscaping styles, and famed architects Carlo Rossi and Bartolemeo Rastrelli contributed to its design. Visitors can enjoy a walk around the garden and lake, and admire a panoramic view of the Russian Museum.

Did you know? The combined territory of all the Russian Museum’s branches covers 30 hectares, which is nearly the same size as the Vatican!

Other branches of the Russian Museum

Did you know? Tsar Paul I was assassinated in the Mikhailovsky Castle. Legend has it that his ghost haunts its halls to this day. 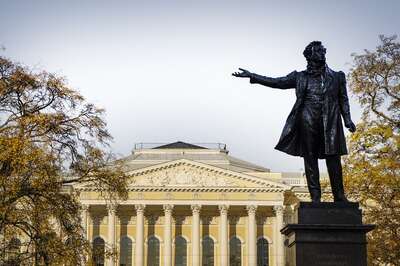 The Michailovsky Palace where the Russian Museum is situated was built by the architect K. Rossi at the beginning of the XIX century for Alexander I´s brother Michail. It...