The History of Pushkin 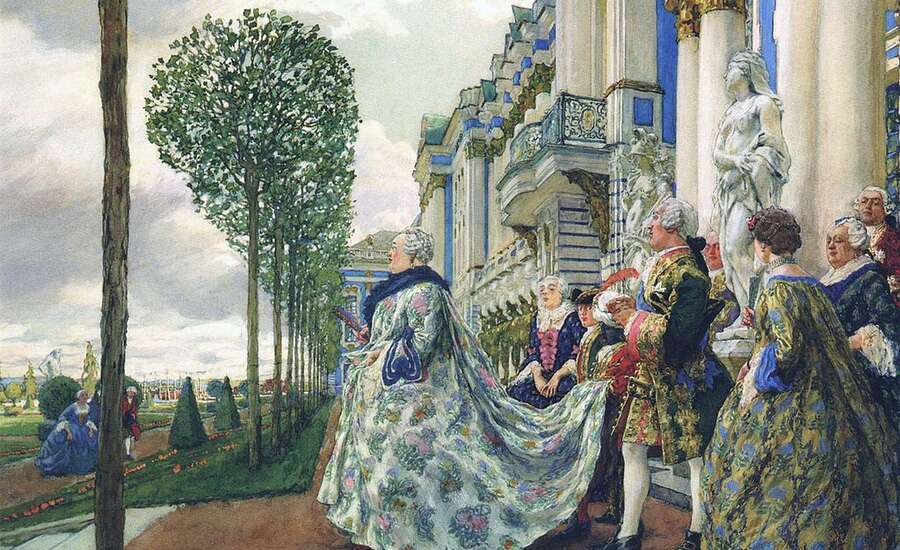 When surveying the grandeur of the Catherine Palace and the surrounding suburbs of Pushkin, one would hardly suppose all these riches were once in the hands of a mere peasant. But that is exactly who Catherine I—or Martha Skavronskaya as she was known in the wheat fields of her native Poland— was. Though it is most likely true that Peter the Great transferred all of present-day Pushkin to Catherine as a sign of his love, Peter was also a calculating man. He foresaw that, with the growth of his beloved St Petersburg, a ceremonial residence for the court away from the heat of the city would be needed in summertime.

Peter and Catherine went down in the books as Russia’s most powerful ruling duo yet, despite their immense wealth, they were no show-offs. Their original Catherine Palace, with “stone chambers of 16 light rooms”, was a far cry from the resplendent sprawling palace that can be seen today. It was Empress Elizabeth who commissioned architectural greats like Rastrelli to transform the comparatively humble palace of her mother, Catherine I, to the shining, 300-meter-long baroque masterpiece of azure, white and gold. What had once been little more than a sixteen room manor house now had corridors leading to 40 state apartments and another 100 private rooms!

While Elizabeth’s lavish investment made the Catherine Palace the stuff of legends, it was Catherine the Great’s dedication which transformed the whole town of Tsarskoye Selo into a royal wonderland. Under her direction, the equally grand Alexander Palace was built as well as the Chinese village and the symbol of the Russian enlightenment, the Cameron Gallery.

Did you know? Russia’s first public railway started in Tsarskoye Selo, connecting it to St Petersburg. Today, despite being more or less abandoned, the Imperial Train Station still stands a few miles away from the Catherine palace— its stunning frescoes left to crumble.

After the exuberance of these two powerful Empresses, the changes made to Tsarskoye Selo by the succession of dull Tsars were rather unimpressive. In all the 200 years after Catherine, the only development worth mentioning in Tsarskoye Selo was the founding of the Lyceum by Alexander I to educate the offspring of Russia’s elite.

Had it not been for Nicholas II, Tsarskoye Selo’s history would have read like a fairytale. But, alas, the very home where Tsar Nicholas II was born was also to be the palace where his family’s rule of Russia was to be relinquished. The gilded gates turned into prison bars which would only be opened once to herd the last of the Romanovs onto a train headed for Siberia.

Did you know? Tsarskoye Selo was the first town in Europe to be fully electrified. In 1887, a power station burred into life lighting up 120 street lamps, like the unique five-tiered lamp still standing on one of Pushkin’s main streets.

Pushkin during the Second World War

Cars, trucks and even tanks were parked inside the halls of the Catherine Palace. The immaculate French gardens were bombed into oblivion. The rolling meadows of the English parks were strewn not with buttercups and bluebells, but with endless coils of barbed-wire. Marauding Mongols could not have treated Pushkin more barbarously than the Nazis. By the end of their occupation, all but one of the dazzling collections of palaces and outbuildings had been burnt, blitzed or bombed. The priceless treasures and pieces of Russia’s history had either been stomped over or stolen.
As the hideout of the Gestapo, only the Alexander Palace remained comparatively unscathed.

Did you know? The Soviets renamed Tsarskoye Selo to Detskoye selo (childrens’ village) after the revolution. Clearly, the name wasn’t exactly apt for such a grand place so, on the centenary of Pushkin’s death, it was given its current name— Pushkin.

What can you see in Pushkin today? 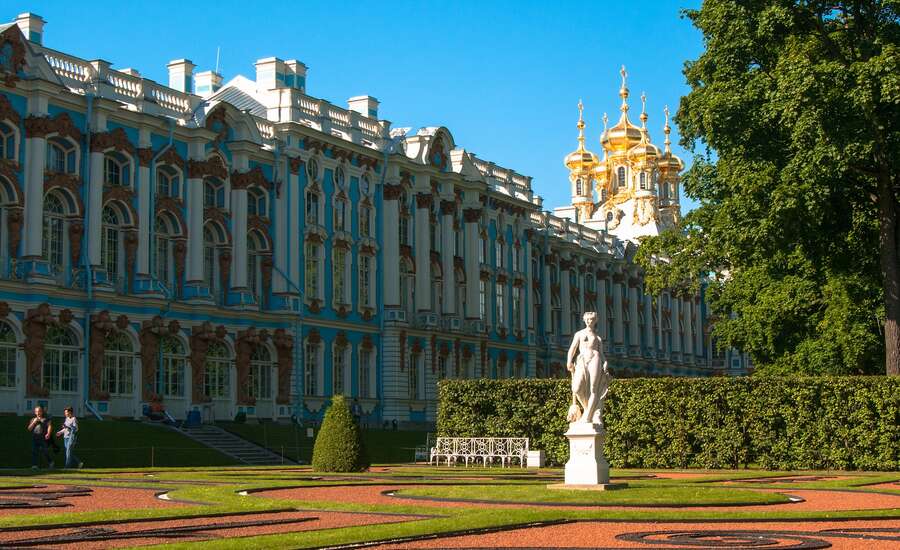 A clueless tourist may be forgiven for thinking that the blue, white and bronze palace in the meadows of southern St Petersburg is the Hermitage—it truly is that resplendent. So richly decorated was the façade of the Catherine Palace that even Catherine the Great—who was famed for her extravagance—couldn’t stomach the cost of its upkeep. The 100kg of pure gold that had gilded the exterior’s intricate stucco molding during Empress Elizabeth’s glorious reign was replaced with a rather more subdued bronze wash. But though the Catherine Palace may no longer glisten on the outside, it certainly beams an impressive shine from within.
Ascending the palace’s marble staircase, with the gold of throne rooms and ballrooms throwing light from above, the origins of the saying “staircase to heaven” suddenly become clear. 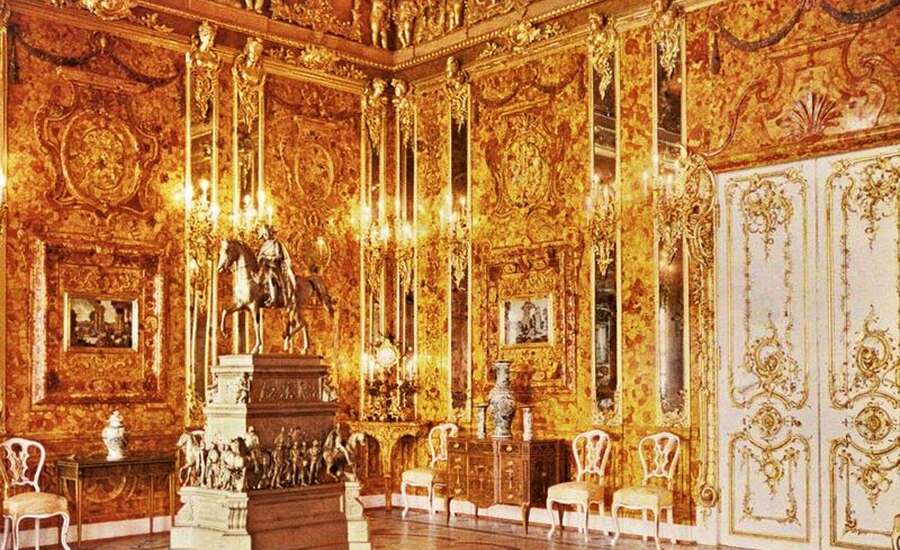 Amber Room in 1917. Autochromes of A. A. Zeest, Wikimedia Commons

Catherine the Great may have taken the glitter away from the Catherine Palace’s facade, but she is also the empress who we have to thank for Pushkin’s most dazzling sight—the Amber Room. When the Prussian King presented Peter the Great with a chamber’s worth of amber panels in 1717, they were stuffed away in a room at the back of the Hermitage. With Catherine as the benefactress, the amber panels were expanded upon till they weighed 6 tons and were extensive enough to fill an entire hall of the Catherine Palace! It was under the blazing candle-and-amber light of this room that Catherine satisfied her legendary lust by wooing scores of handsome courtiers.

Did you know? Amber was 12 times dearer than gold at the time of the room’s construction! 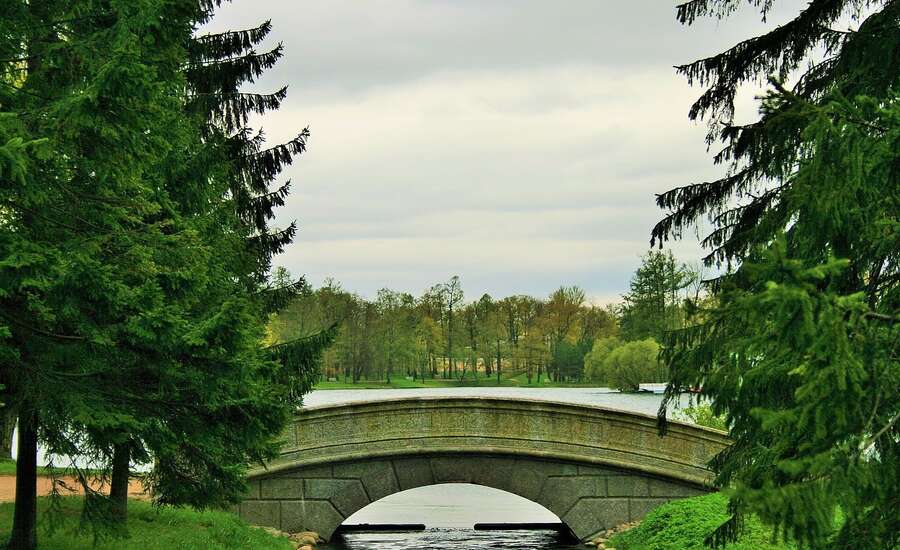 Photo by Lynn Greyling from Pixabay

Blossoming meadows and acres of freshly cut lawns saturate the air of Pushkin with their heavenly fragrance. At every corner on every historic street, gates and footpaths lead to one grand park after another. While these parks all stretch out into breathtaking vistas, it is the Catherine Park— with its ensemble of wide lakes, pretty fountains, majestic monuments, romantic bridges and royal outbuildings— that is undeniably Pushkin’s finest park. Sail on the Great Lake on a gondola like the Tsar’s children, and marvel at Peter’s Dutch gardens, the Turkish Cascade and the Roman bathhouses. 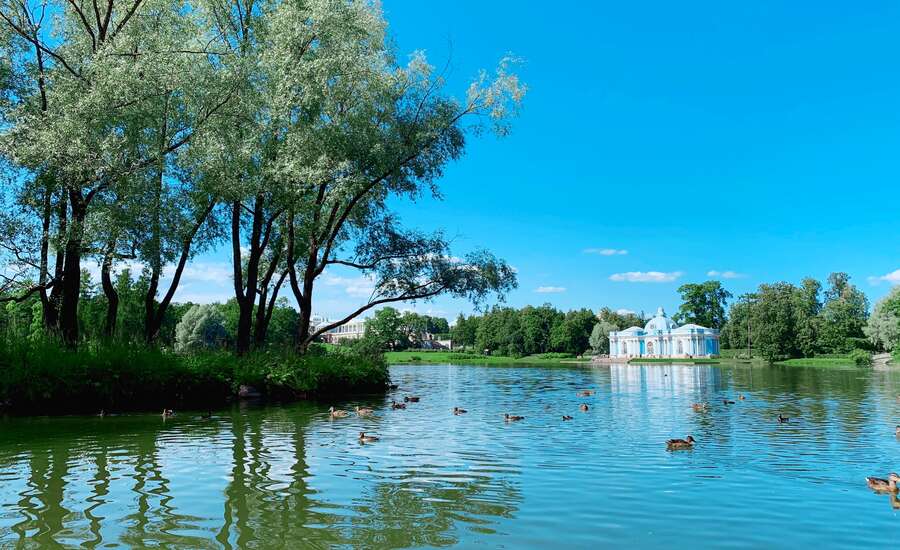 Photo by Marla Prusik on Unsplash

The Hermitage is almost always associated with the magnificent palace on the Neva but actually, the word primarily refers to the dwelling of a hermit. Shrouded by the thick foliage of oaks and surrounded by a moat, the Hermitage in the Catherine Park embraces the true meaning of the word. While its style may not resemble that of a humble hermit’s retreat (the pavilion is a stunning miniature of the Catherine Palace), every aspect of its functional design was created in the aim of achieving complete secrecy. The Empress was adamant that not a single servant would disturb her evenings in the Hermitage with her closest confidants and, to that end, she even had a special elevator system constructed for the dining tables so that staff could serve food on the bottom floor and then hoist it up to the banqueters above! 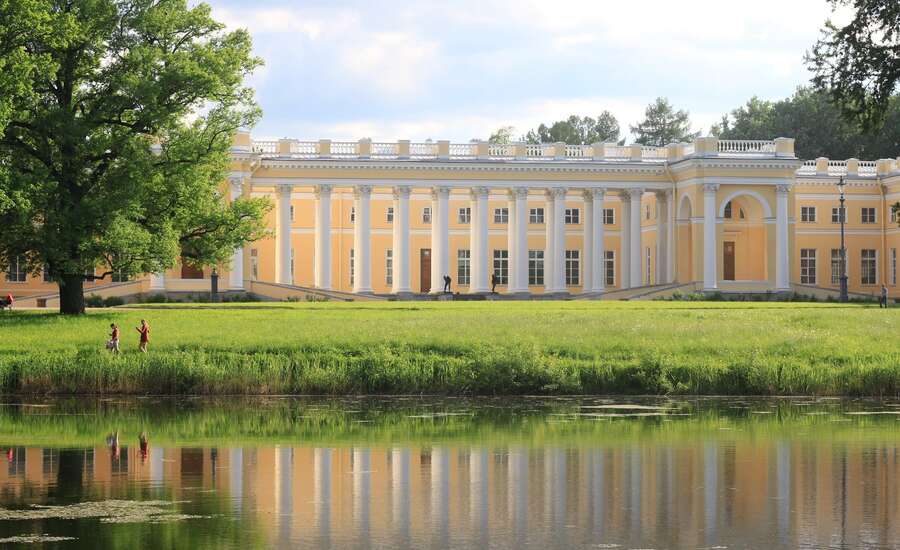 Photo by cmsaccount from Pixabay

The art-critic Igor Grabar once wrote of the Alexander Palace that “There are palaces that are bigger and more regal, but there is no palace with architecture that is more beautiful.” The mellow yellow and simple Corinthian columns of the palace lend it a subtle beauty that Tsars like Alexander I, Nicholas I, Alexander III and especially Nicholas II appreciated; the former to such an extent that he made it his official residence. Since 2015 the palace has been closed for extensive renovations. The parkland and surrounding buildings are still open, however, and the village of 18th-century Chinese cottages which once housed Catherine II’s court now runs as an unbelievably luxurious hotel. 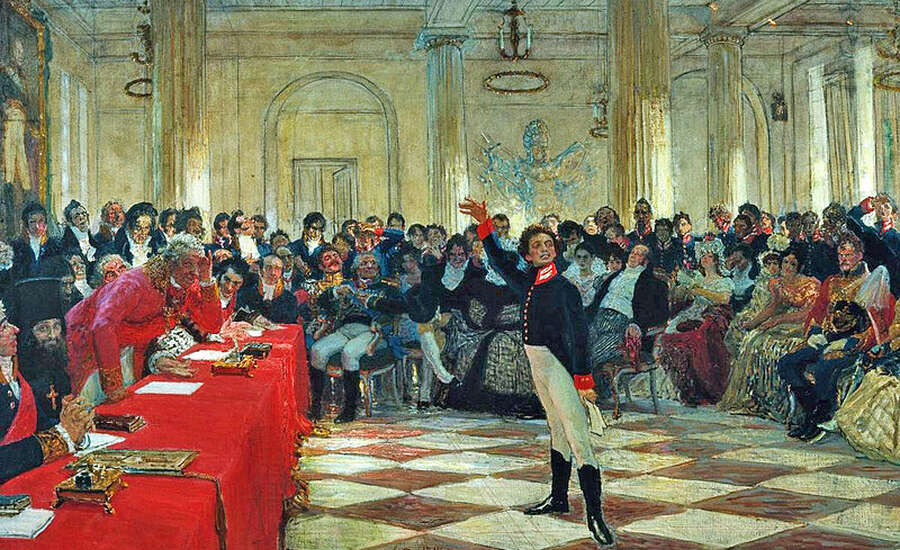 A. S. Pushkin recites his poem before Gavrila Derzhavin during the Tsarskoye Selo Lyceum exam on January 8th, 1815, painting by I. Pepin, 1911, Wikimedia Commons

Russians know the town of Pushkin, not by postcards or tour excursions, but rather by the intimate poems of its namesake—Alexander Pushkin. Thanks to Alexander I, who founded an elite school (Russian: lyceum) close to his palace, Pushkin was trained in the art of verse. Along with the workbooks and dormitory of a young Pushkin, poignant traces of the school’s other famous students like Anna Akhmatova, Mihail Glinka and Vasily Zhukovsky can be seen in its grand lecture halls and dingy dormitories. Pushkin enjoyed his time so much in what was then Tsarskoye Selo, that he rented out a cottage with his newly-wedded wife on the town’s main street. In his carefully preserved, dainty wooden cottage (the Pushkin memorial dacha museum) visitors can see the study where Pushkin finished his greatest work, Evgeniy Onegin, and discover the environment that inspired his poems.

Essential information
Address and Transport:
Pushkin, St Petersburg
There are a number of ways to get to Pushkin:
- By train from Vitebskiy Station to Tsarskoye Selo Station.
- By bus № К287, К342, К347а, К545 or №187 from Moskovsky metro station.
-If you take a private tour with Express to Russia, you will travel via your own private vehicle. 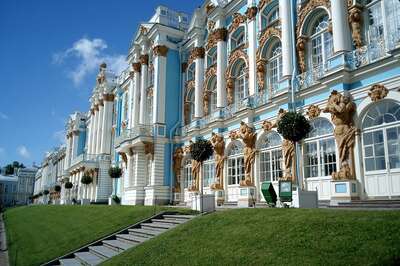 The Palace and Park of Tsarskoye Selo is a former country residence of the Russian Tsars. It is a fascinating monument of the world’s architectural and gardening arts of...