Best things to see in the Central Naval Museum:

As with many of St Petersburg’s most important sites, the Central Naval Museum owes its existence to the ingenuity of Peter the Great. The acorn of the idea that was to blossom into one of the foremost nautical museums in the world first set root during the young tsar’s European tour. Seizing every opportunity to expand his exhaustive store of knowledge, the ever ambitious Peter immersed himself in the shipyards of the two most adept navies at the time, the British and Dutch— both handily under the rule of his long-time friend, the Prince of Orange. There he uncovered the technique of ship modelling which would form the basis of the Naval Museum’s collection.

Just six years after Peter founded St Petersburg, the Russian Baltic fleet was growing at such a rate that an entire building was needed to house the sketches and models of his ships. Named the Model Chamber, it was situated in what is to this day the city’s most striking landmark: the Main Admiralty. 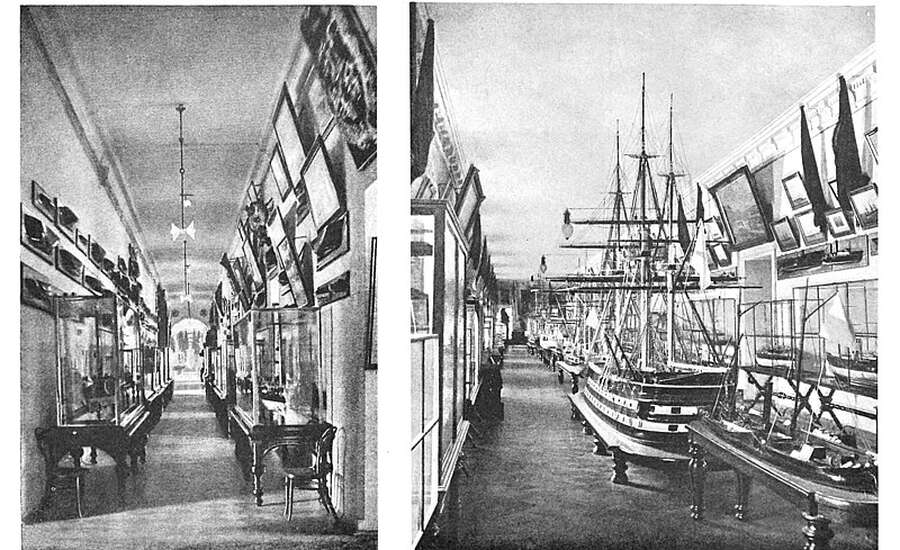 For almost one hundred years the best and brightest of shipbuilders, scoured from all over Europe by Peter, made thousands of specimens for the Model Chamber. By 1805, however, the whimsical, wooden models were outmoded. Entirely theoretical drawings which could be scrolled up and put in a box meant the Model Chamber was obsolescent. With the designs no longer being state secrets, the chamber was opened to the bourgeois as a museum. Alas, upon Tsar Nikolai I’s succession, the museum was deemed to be of little interest and closed down. Hundreds of models were sold, misplaced or simply destroyed. By the time outraged maritime enthusiasts had persuaded the Tsar to reopen the museum, Peter’s once grand collection had dwindled to 500 items.

Did you know? Tsar Nicholas II commemorated the 200th anniversary of the Model Chamber by renaming it in honour of Peter the Great.

While the Romanov’s had always been keen to show off their maritime prowess, the museum’s importance rose to new heights under the direction of the Communists. All the most flagrant references to the Royal family— from the name of the museum to some priceless Imperial belongings— were obliterated and the museum was relocated to the august premises of the Birzha (Stock Exchange) to make room for the expanding 20th century collection.

WWII may have halted the expansion of the museum but it also contributed a lot to it. From the rubble of Leningrad, branches of the museum were opened up. On the shores of Lake Ladoga, the Road of Life museum was set up to document how citizens of Leningrad crossed the frozen lake to bring supplies into the city. Later, the USSR’s first and perhaps most heroic submarine, Narodovlets, became a museum in itself as did the Aurora, the cruiser which shot the cannon that marked the Russian revolution. In short, the Central Naval Museum was exploited as a machine of Soviet propaganda to maximum effect.

Did you know? Miraculously, the museum’s collections were unscathed during the war thanks to their timely evacuation to Ulyanovsk.
What can you see at the Central Naval Museum today?

Having moved from the old Stock Exchange in 2013 to the exceedingly apt setting of the 19th century Kryukovskiye Kazarmi (marine barracks) overlooking the canal Kryukov, the Central Naval Museum has never looked more shipshape. Over the past three centuries its collection has amassed 719,000 items— making it one of the world’s largest naval museums. Along with the exquisitely detailed ship models that number in the thousands, the museum’s fifty-seven collections include weapons, art, navigational gadgetry, and a stunning array of the nautical-themed Royal belongings. 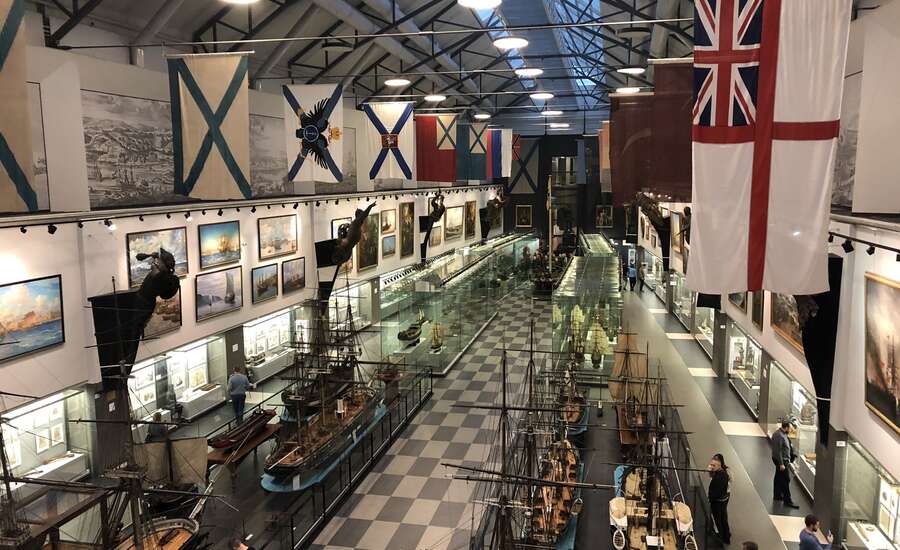 Being the raison d'être of the museum, it is only natural that ship models should form a key part of the exhibition. Indeed, the 2000+ painstakingly crafted models—ranging from miniatures that could fit in a bottle to reproductions of grand battleships on a scale of 1:12—have marked this museum out on the map of the world’s best marine museums. Trace the course of shipbuilding over the centuries, as improvements in design turned creaking oak man o’wars into megalithic Soviet cruisers and gaze into the future with monstrous models from the Cold War that thankfully remain pipedreams…for now. 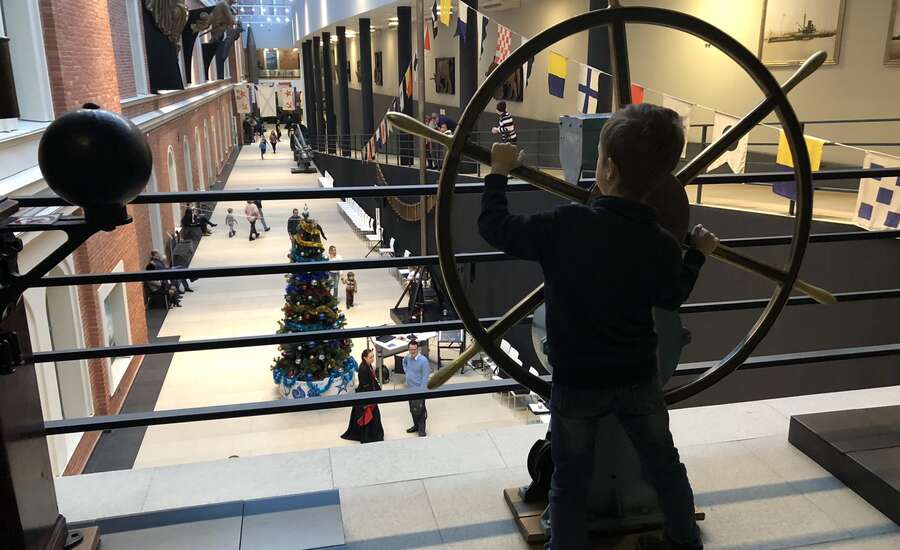 Weather-worn, blood-soaked and battered; though the Central Naval Museum may be famous for its models, it is the bonafide ships, with crusts of salt still sparkling on their hulls, that really set the imagination sailing. The 1000 year old canoe—the only surviving one of its kind from ancient Rus’— seems to reverberate with the song of the Volga boatmen, while the steely-glint of the world’s first electric powered submarine (1881), named after its inventor Dzhevetsky, still sends shivers down spines. Nothing in the museum is more evocative however than the botik of Peter I. This bonnie, little sailing boat which took its young master down the Yautze River on many a fine day now holds the grand title of ‘Grandfather of the Russian Fleet”.

Tallying in at around 11,000, the arms stash of the Central Naval Museum is dangerously fascinating. Military aficionados could get lost for days in the rows of canons, sabres and bayonets. Even the smallest of revolvers in this collection deserves attention—chances are it may have once saved the life of one Commander Makarov or Admiral Nakhimov or even Captain Nelson. Exquisitely crafted ceremonial weapons with royal insignia gleam as if fresh from parade on Palace Square and the inquisitive visitor can even uncover the belongings of Tsarinas within this remarkable collection of belongings from Russia’s most illustrious personages.

Let our expert tour guide reveal the secrets and histories behind the artefacts of the Central Naval Museum on an Express to Russia Military St. Petersburg Tour. We pride ourselves on organizing tours that stretch further and delve deeper than any other excursions. 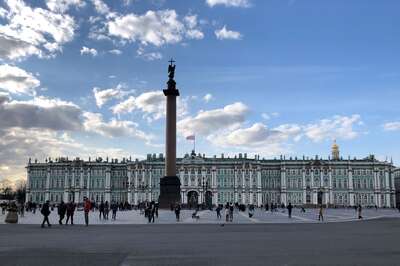 This tour is a great introduction to St. Petersburg - the Venice of the North. During the tour, you will visit the Yusupov Palace associated with the fate of Rasputin, St. Isaacs Cathedral, the Hermitage Museum and the Cathedral on the Spilt Blood. 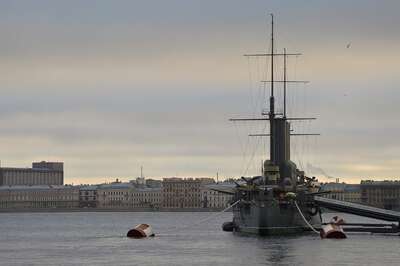 Military Tour: the Artillery Museum and the Central Naval Museum with transport

This excursion will be exciting for those who are interested in the military history of Russia. The tour includes a visit to the Artillery Museum and the Central Naval Museum....