What is the Lakhta Center?

The Lakhta Center is perched on the shore of the Gulf of Finland like a futuristic spaceship. It was commissioned by Gazprom, the richest company in Russia, to house its headquarters. Yet the Lakhta Center is intended not just as an office block, but as a cultural and scientific center of St Petersburg. The pioneering architecture and design of the complex has won global acclaim; in particular the 462-metre Lakhta skyscraper, which is the tallest building in Europe, and yet another (albeit newer) architectural monument of Russia’s northern capital. 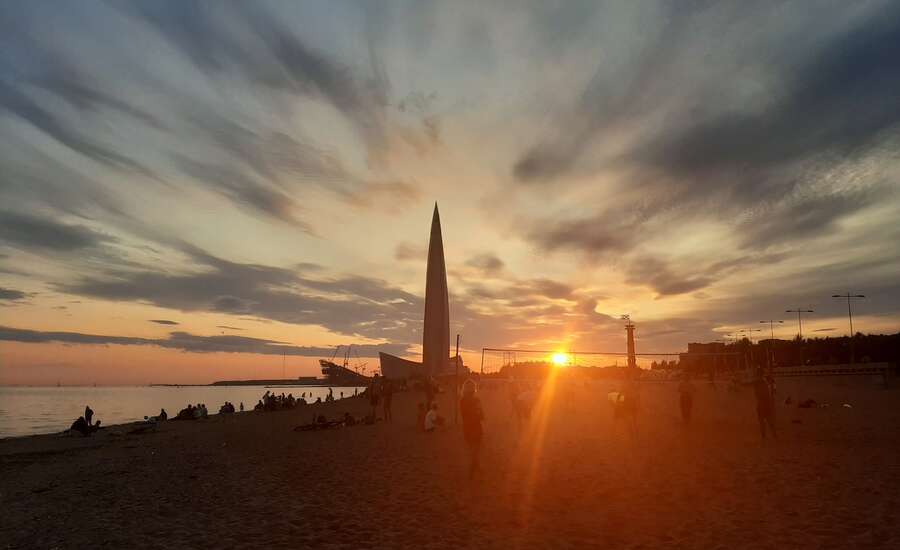 Photo by Express to Russia

The idea of the Lakhta Center was initially conceived in 2004, when Gazprom acquired a plot of land in central St Petersburg for their new headquarters. A competition to design the then-called Okhta Center was held in November 2006, at the Scientific Research Museum of the Russian Academy of Arts. The competition was won by British architectural bureau RMJM. However, the Okhta Center was not to be.

Such a massive skyscraper (the proposed height was 396 metres) so close to the historic center would destroy St Petersburg’s unique skyline, protected ever since the city’s inception; no central buildings, other than churches, could be taller than the Winter Palace. The Russian Minister of Culture and Director of the State Hermitage voiced their opposition, the Union of Architects of Russia boycotted the competition (leaving only foreign companies to enter), and ¾ of the judging panel quit the competition in protest. The situation became so serious that UNESCO condemned the Okhta project for violating the World Heritage site of St Petersburg’s historical center, and considered placing St Petersburg on the ‘blacklist’ of endangered sites.

Eventually, construction was moved to Lakhta, a settlement to the north-west of St Petersburg. The Lakhta Center project would kickstart the regeneration of the city outskirts with new business, public, and transport infrastructure. The project comprises four buildings: a skyscraper, two multifunctional buildings, and an entrance arch. One third of the complex will be allocated to public use. This space will include a sports complex and spa, planetarium, children’s science park, exhibition spaces, outdoor amphitheatre, multifunctional performance hall, shops, and restaurants.

Did you know? The pedestal of the Bronze Horseman monument in St Petersburg was excavated in Lakhta. The so-called ‘Thunder Stone’ weighs 1,250 tons and is the largest stone ever moved by humans. 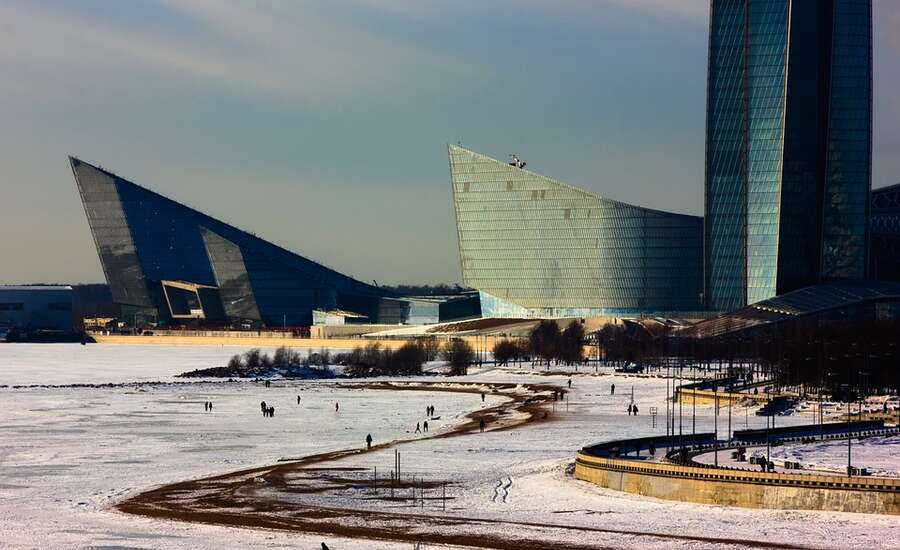 Photo by ustalij_pony from Pixabay

Construction of the Lakhta Center took place between October 2012 and October 2018, with the contribution of 600 companies from around the world. It made a significant impact on the development of domestic construction, as representatives from the world’s leading construction and architecture firms shared their experience with Russian professionals. The process included a competition for young Russian architects to design various facilities around the Lakhta Center.

Did you know? A cat lives on the construction site at the Lakhta Center and is cared for by the employees there. The cat, named ‘Fox’, even has his own Instagram page!

The 87-floor Lakhta skyscraper was built between February 2015 and October 2018 on the shore of the Finnish Gulf – a territory with sandy, marshy soil, battered by strong sea winds. To ensure stability and safety, a wind tunnel was constructed in Novosibirsk to test models of the skyscraper. As with other huge monuments in St Petersburg, such as St Isaac’s Cathedral and the Winter Palace, thousands of piles were driven into the soil to support the foundations of the skyscraper. Every 14 storeys is a pair of special technical floors, engineered to distribute any impact to the skyscraper – for example, high winds or earthquakes - back to the core of the building. The skyscraper has a ‘smart’ façade: layers of glazing and air valves provide natural ventilation and insulation, and the glazed panels rotate to deflect intense sunlight.

Did you know? The Lakhta skyscraper is covered in 130,000m2 of glazing, made up of 16,000 glass parallelograms – this even exceeds the area of glazing on the Burj Khalifa, the world’s tallest building.

The Lakhta Center is not yet open, as interior design is still ongoing. Most of the office space will be opened by the end of 2021, and Lakhta’s public spaces only in 2022. But the Lakhta Center, in particular the skyscraper, has already attracted worldwide attention for its pioneering architecture and design. On 12th November 2020 Lakhta was awarded the Emporis Skyscraper Award, the world’s most prestigious award for high-rise architecture. 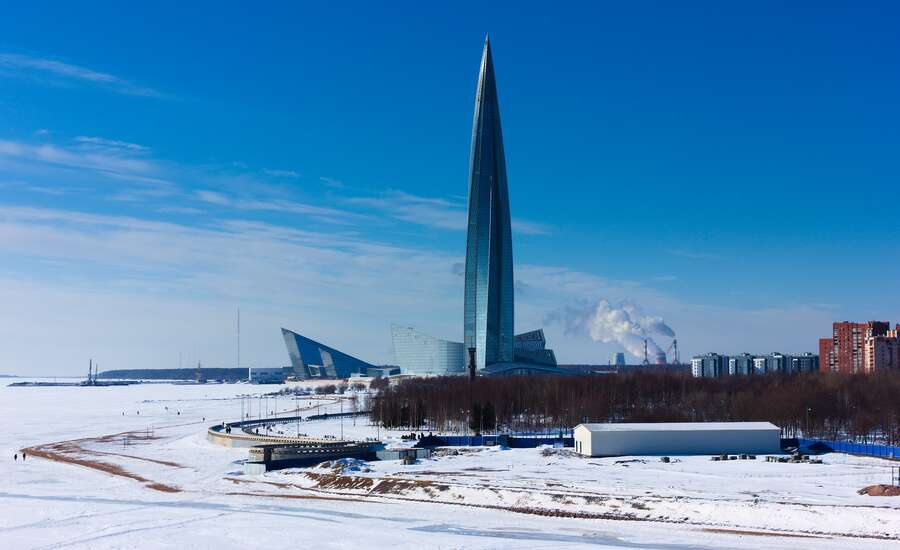 Photo by ustalij_pony from Pixabay

The futuristic architecture of the Lakhta Center is meant to symbolise efficiency, innovation and power. The Lakhta skyscraper comprises 5 twisting towers rising from a pentagon-shaped base, rotating through 90 degrees and tapering to a point around the central core. When seen from a bird’s-eye view, the skyscraper appears like a blooming flower. But the architecture is not solely for aesthetic purposes; the shape channels openness and lightness, as the large surface area of the glazing means that 75% of workspaces will be naturally lit.

Did you know? Creating the foundation for the Lakhta skyscraper involved the largest continuous pouring of concrete in the world: 19,624m³ of concrete poured over 49 hours. This is 3000m³ more than the previous world record, held by the Venetian Resort in Las Vegas. 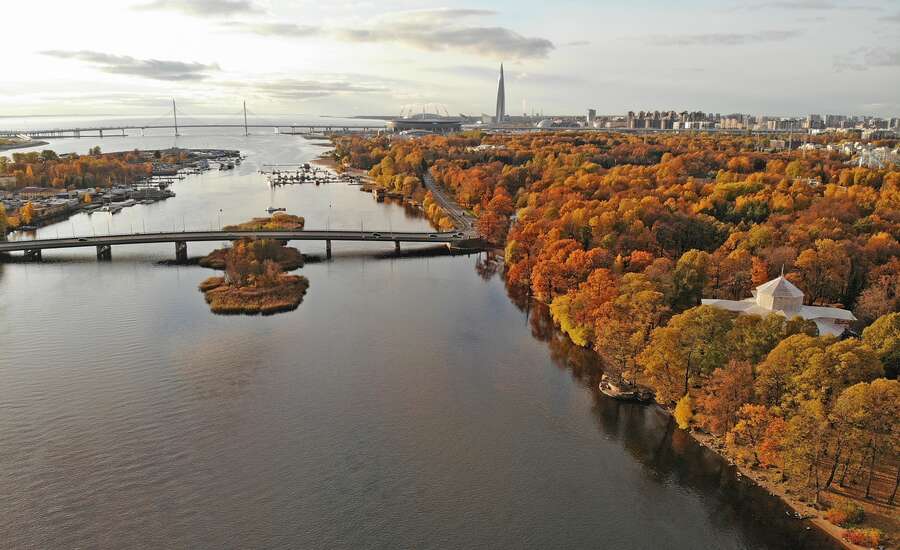 Photo by MalinaGroup from Pixabay

According to chief architect of RMJM, Tony Kettle, the Lakhta Center is characterised by maritime motifs: the fluid lines of the skyscraper are reminiscent of flowing water; the multifunctional buildings resemble a ship’s hull; and the entrance arch takes the form of an undulating wave. Lakhta Center’s Director General, Elena Ilyukhina, stated that the skyscraper is in keeping with St Petersburg’s architectural traditions of building a tall landmark on the horizontal landscape (for example, the Peter and Paul Cathedral and the Admiralty), and that its vertical lines complement the futuristic Gazprom Arena (football stadium of Zenit) and the cable-stayed bridge nearby.

Did you know? The highest observation deck in Europe will open at the Lakhta Center. It will stand at a height of 360 metres, giving a view over St Petersburg and the Finnish Gulf like no other.

Nearest metro: The best view of Lakhta is from the beach of 300 Years Park, a 1km walk from Begovaya metro station.