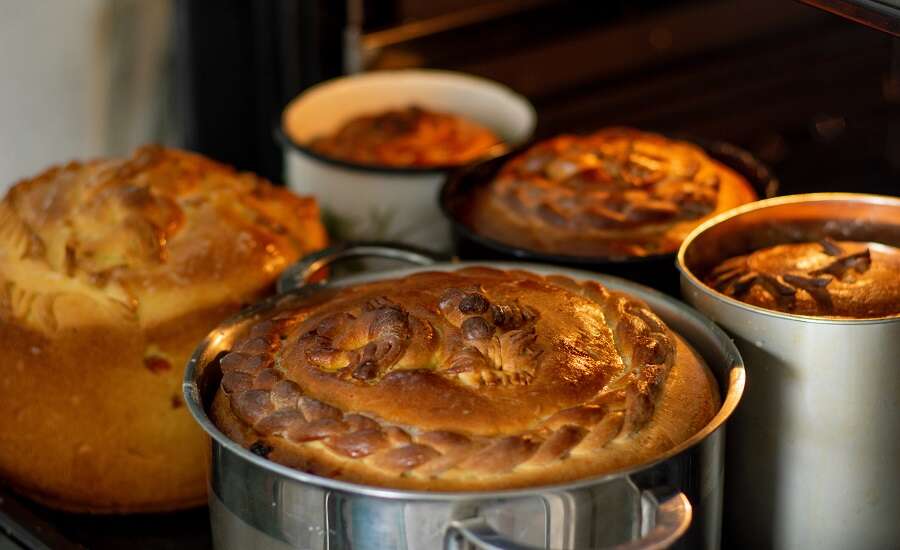 Photo by Elena Mozhvilo on Unsplash

Soft as a pillow, caramelized on the edges and stuffed with rich fillings; Russian pirozhki are dangerously moreish. In fact in the 1950’s, one opportunistic Japanese chef decided to capitalize on the deliciousness of pirozhki, by pretending that it was his original invention. Hazuo Tomita managed to patent the pies and earned a pretty pile of money from the royalties of Japanese pie-sellers till some Russian found out and called the bluff. The ensuing court case involved one of the highest numbers of witnesses in history. Six hundred people in total were called upon to testify to the Russian origins of the humble pirozhok!

Some things never change; in our era of KFC and hamburgers, pirozhki are still the go to fast food for Russians. All over the country, from the wide avenues of Moscow to the dirt roads of regional Russia, the smell of gently frying pirozhki seeps out in tantalizing wafts from food trucks and hole-in-the-wall bakeries. 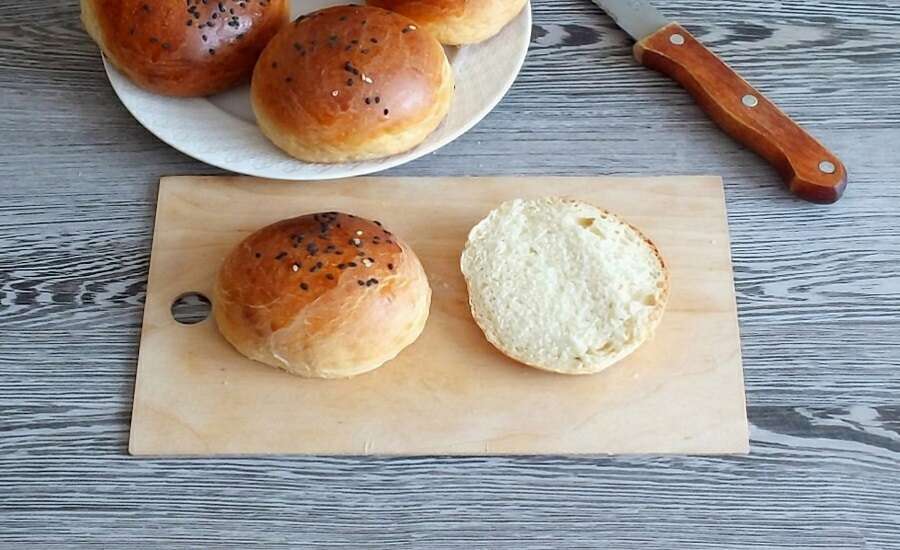 Photo by Pavel Subbotin on Unsplash

Pirozhki are translated into English as pie, yet it would be more accurate to call them buns. Unlike your granny’s apple pie, they’re not encased in a flaky crust and they can’t feed a whole family. Though they do vary, most pirozhki look a lot like an oblong bread roll and comprise of a soft, bready shell filled with mostly savory fillings. They’re best eaten warm and though they are delicious by themselves, for a proper meal they’re usually accompanied by a bowl of soup.

The secret to a mouth-watering pirozhok is in its filling. Though the dough for pirozhki is almost always a yeasty mixture of white flour, water and oil, there are about as many pirozhki fillings as there are vegetables in an Olivier salad. Health-conscious babushkas tend to fill their pies with braised cabbage or boiled potatoes and mushrooms, while those who like to spoil their families fry up mincemeat or caramelize apples and raisins. Sometimes pirozhki are stuffed with cottage cheese or even boiled eggs, but the most traditional and most universally-loved filling is by far plain ol’ cabbage.

To fry or not to fry? 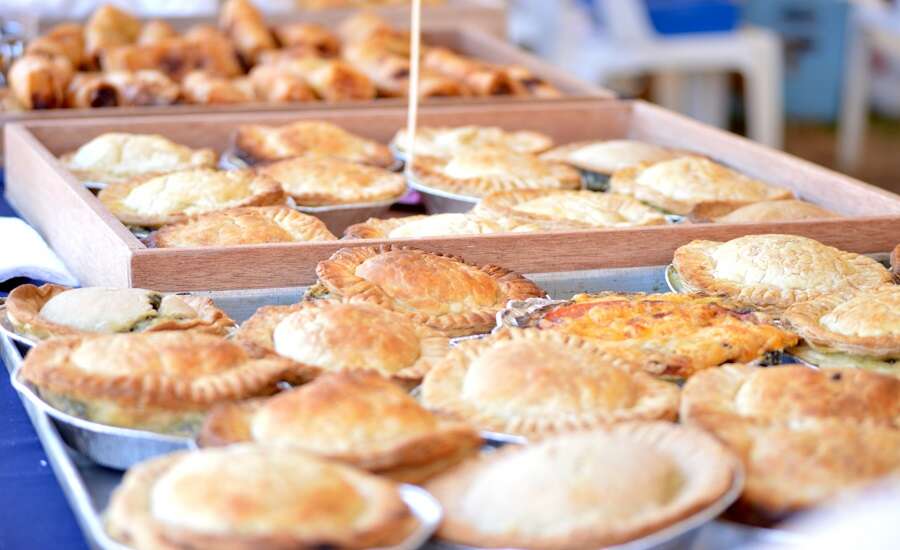 Photo by FitNish Media on Unsplash

It may come as a surprise to those accustomed to slowly baked fall pies, but Russians sometimes fry up their pies. These crispy pies are usually sold in the cities, while in the villages babushkas tend to bake theirs. If trying one of the recipes below, why not fry up half of the batch and bake the other half? That way you can find out the answer to one of the most hotly contested questions in Russia! 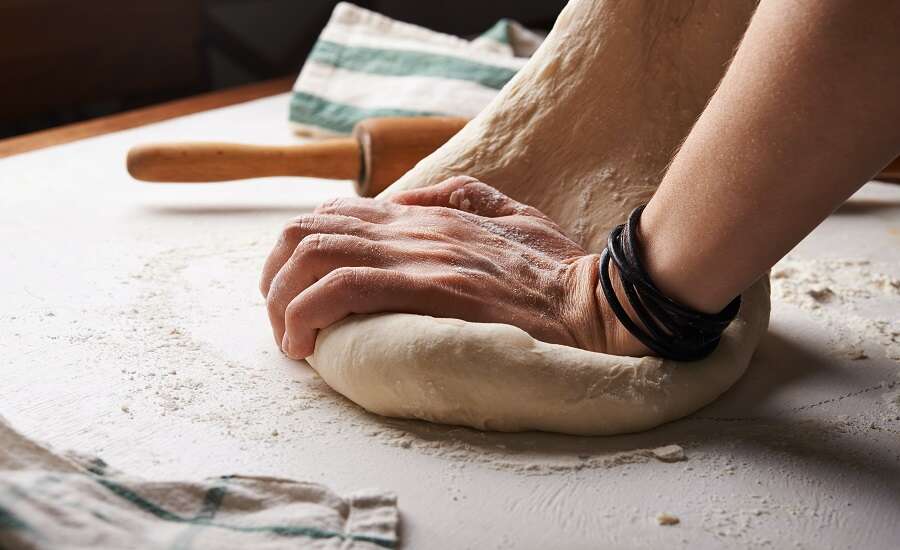 Photo by Nadya Spetnitskaya on Unsplash

1. Mix the yeast with 2-3 tbsp. of lukewarm water and 1 tbsp. of flour. Leave to activate for 10 minutes.
2. Sift all the flour into a bowl and add the sugar and a pinch of salt. Stir to combine.
3. Pour in the remaining warm water and the yeast mixture and start mixing the dough with a wooden spoon.
4. Add all the vegetable oil and knead for about 15 minutes with your hands until you have a ball of soft dough.
5. Place the ball of dough into a greased bowl, cover it with a damp tea towel and leave it in a warm spot to rise. While the dough is rising make the filling.
6. Place a frying pan on medium heat with a splash of oil. Chop up the onion into thin half-rings and sauté until golden. *For a more flavorful filling, add a pinch of cumin seeds along with the onions.
7. While the onion is frying, using a grater or a knife shred the cabbage into thin, long strips and grate the carrots.
8. Add the cabbage and carrots to the pan and cover the pan with a lid. Leave to cook for another 6-8 minutes until soft and buttery. Season to taste and allow to cool a little.
9. After an hour, the dough should have doubled in size. *If baking the pies, set your oven to 180c (350F). If frying, heat up a few cm of oil.
10. Punch the dough down five times and split it into balls. You should get around a dozen and a half balls that are a little smaller than tennis balls.
11. On a floured surface flatten the balls into thin circles and place two tablespoons of filing in the centre.
12. Fold the two sides of the circle over the filling, pinching them together to form an oval pie with a ridge running down its centre.

Brush the pies with a little oil and set on greased parchment paper. Bake for around 20 minutes until golden brown.

On medium-high heat with a few tbsp. of oil shallow fry the pies for around 2-3 minutes, or until golden on each side. Place the pies on a paper towel so as to absorb the excess oil.

2 large apples (peeled and cubed)
1 heaping cup of blueberries (for an authentic Russian flavor, use wild ones)
1 tbsp. of lemon juice (optional)
1-2 tbsp. of honey or sugar (optional)
Lemon zest and cinnamon (optional)
In a small pot simmer the apples in a few tablespoons of water till slightly soft. Add the blueberries and any of the other optional ingredients and cook on medium heat for a few more minutes till you have a thick, jammy filling. Follow the directions for the pie dough above.

Learn which other dishes you may want to taste while in Russia.

Borsch: A Definitive History and a Russian Recipe