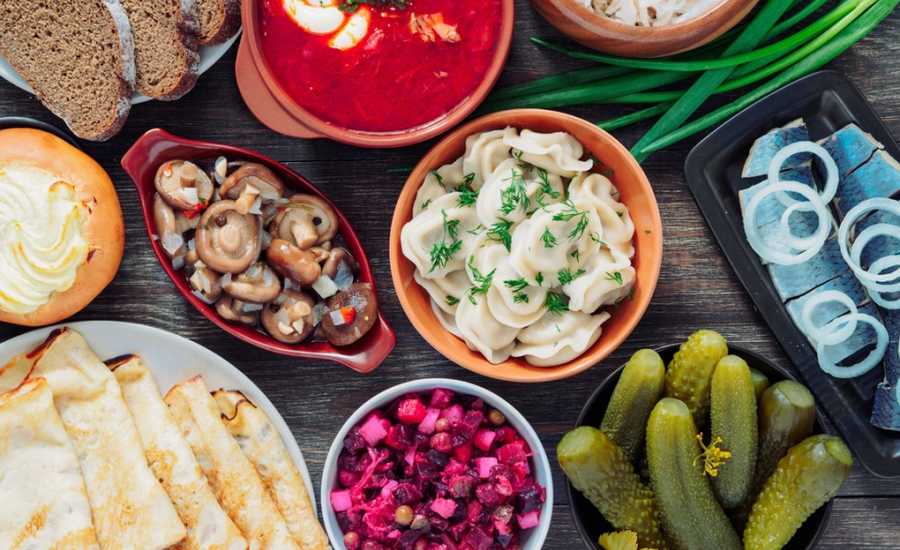 What are the major stages in the history of Russian cuisine?

Foreigners usually associate Russian cuisine with its most famous dishes and appetizers: smoked sturgeon (balyk), stellate sturgeon with horse-radish, freshly-salted salmon, red, black or pink (white-fish) caviar and pickled mushrooms. And, of course, with crystal-clear Russian vodka which is a perfect accompaniment to these dishes both visually (as with a still life painting) and taste-wise. However, these holiday meals don't give a complete picture of the richness of Russia's national cuisine with its traditional soups and hot dishes. In fact, this richness in cuisine can help explain the warm hospitality of Russians.

Russian cuisine has developed over a long period, adopting different dishes from many different countries, but at the same time it has retained many of its own traditions. In spite of all of the changes in Russian national cuisine over the years, no one can imagine a Russian table without brown bread, pancakes, pies and porridges or dishes made with fish or mushrooms or pickled vegetables. And of course, Russian holiday meals consisting of grilled game or poultry and a large number of sweets (home-made jams, honey-cakes, spice-cakes and Easter cakes) will never leave any guest indifferent. 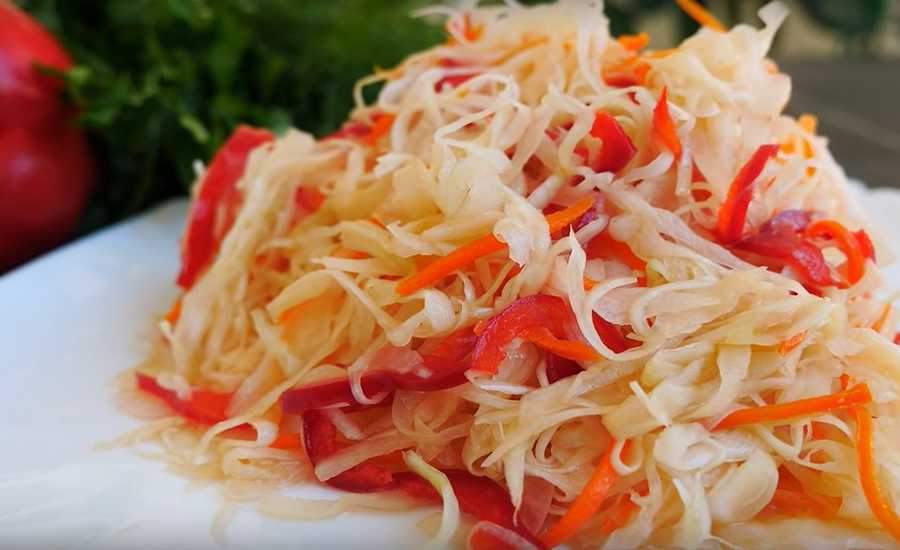 One of the peculiarities of Old Russian Cuisine was the way in which the dishes were prepared using a special Russian oven. The oven allowed the cooks to either bake or boil food; however, it was impossible to fry, grill or roast meat. The oven used a very interesting temperature regime: food could be prepared at either a constant or decreasing temperature but never with an increasing one. These conditions allowed the cooks to create quite interesting meals with their own specific taste which cannot be created today using a modern gas or electric oven.

Another important factor giving Old Russian cuisine its special taste was the use of different herbs in nearly every meal. The favorite spices of the time were onion, garlic and saffron but people also used clove, salt, pepper and horse-radish.

The cuisine was also characterized by very strict preparation rights for each course. All meals were separated into two categories: Lenten and Ferial. Most days throughout the year (from between 192 to 216 days) were considered Lenten, meaning that people could not eat food consisting of meat, eggs or milk during these days. This strict adherence to Lenten rituals led to a very wide development of Lenten cuisine. Even today, Russians still eat many of their meals consisting of only fish, vegetables and mushrooms.

The overall favorite dish in Old Russian was pie with different types of fillings: meat or fish, poultry or game-bird, curds, mushrooms, vegetables, fruits and berries. Very often people baked pies using a combination of various cereals coupled with fish or meat. Pastry for pies and dough for bread were prepared using rye flour. Wheat flour was used quite rarely – only to prepare holiday white kalatches (bread in the form of a big ring). Later, housewives began to mix together wheat and rye flour to prepare fritters, doughnuts, barankas (small baked rings), bagels and other pastries. 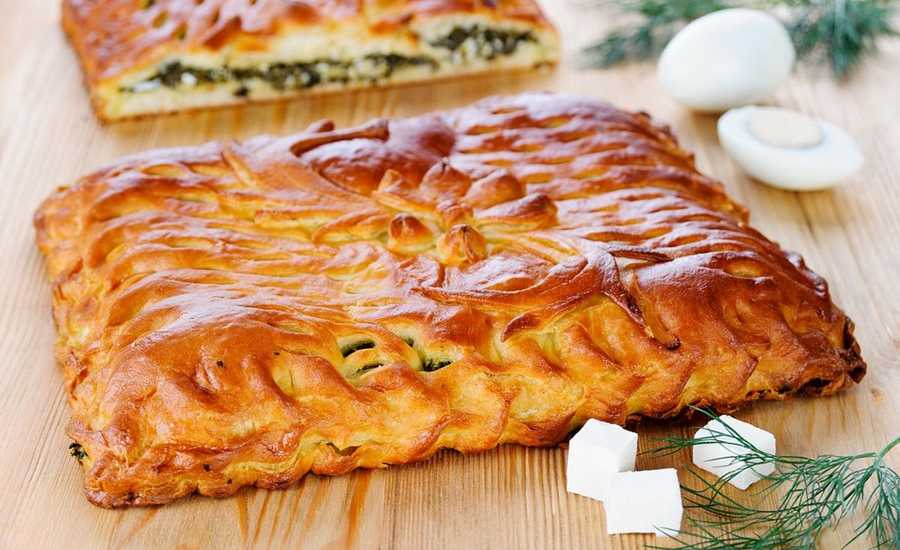 Soups also played a large role in the kitchen of this time. Usually people prepared clear soups from fish or meat and spiced them with different kitchen herbs. For example, black soup was prepared with cloves and white soup using pepper. Soup without spices was called naked soup. Other popular soups of the time were rassolnik (soup from meat boiled in cucumber brine) and shchi (meat soup with fresh or sour cabbage).

Fish was also very popular, especially when dried, pickled and smoked. Fresh fish was a rarity and only the Tsar and rich boyars could afford the delicacy of having fresh salmon, sturgeon or pike. Another typical delicacy was caviar: people ate it with vinegar, pepper and cut onion.

Red meat was not very popular in Old Russia. It was sometimes used in the preparation of different soups such as shchi or in different sauces. When it was eaten, people usually ate beef and sometimes mutton and pork. The consumption of some types of meat were strictly forbidden, especially veal and rabbit meat. More often, people ate poultry and game-birds. Swans, cranes, black grouses, hazel grouses and partridges were dainties throughout all Russian history.

The most interesting meat dish of Old Russia was something called "a hangover". It consisted of cold cut mutton with pickled cucumbers, vinegar and pepper. This meal was used as a medical drug against terrible illnesses - especially the hangover.

Vegetable dishes were very popular in Old Russia, and not only during Lenten periods. Sauerkraut, beetroot with oil and vinegar, pies with peas, buckwheat porridge, boiled and baked mushrooms, oaten kissel, fritters with honey, horse-radish and black radish were all consumed in great quantities.

Some new dishes were introduced into Russian cuisine at the end of the Old Russian period (16th-17th centuries). Most of these came from the East; dishes consisting of noodles (with milk, meat, chicken or mushrooms) and ravioli, adopted from the Turkish and Tatar people respectively. Today, both Russians and foreigners consider these dishes as traditional Russian ones, but they ain't!

Finally, people of the Old Russian period invented most of the traditional drinks that are associated today with ancient Russia: Medovukha (a mildly alcoholic drink prepared from honey, hops and berry juice), berezovitsa (a drink made from birch sap) and the famous Russian vodka. 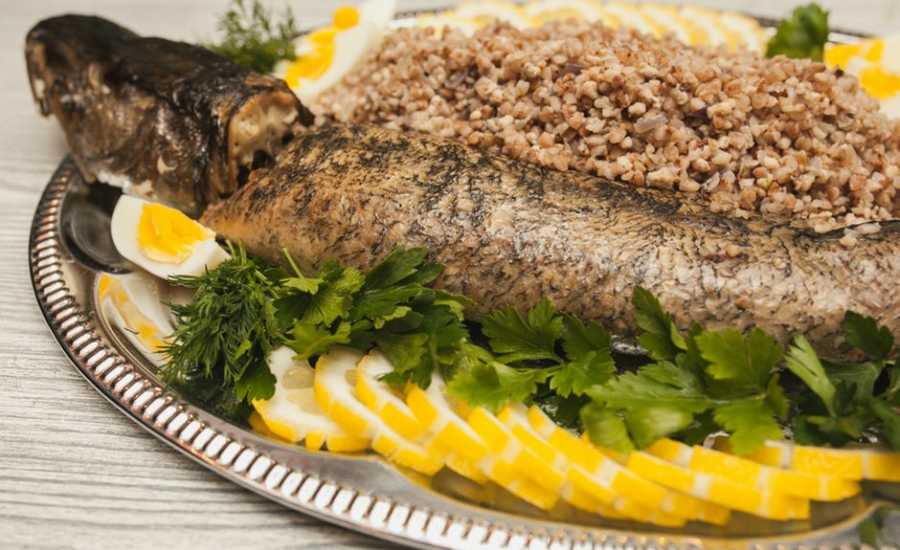 During the Moscow Period, Russian cuisine was separated into 2 different types of cuisine, one for the rich and one for the poor. The food of the common people was simpler, while the cuisine of the nobles and boyars more sophisticated – especially holiday meals. Rich people enjoyed eating large meals which included holiday meals of large swans, geese and fish. Some of these animals were so large and heavy that they required the help of 3 or 4 people to carry them into the kitchen and later to the table. The decorative quality of these meals was over the top: chefs prepared dishes in the shape of palaces, flowers and fantastic animals from a wide variety of ingredients. The Lenten cuisine of this period had also become richer and more extravagant. 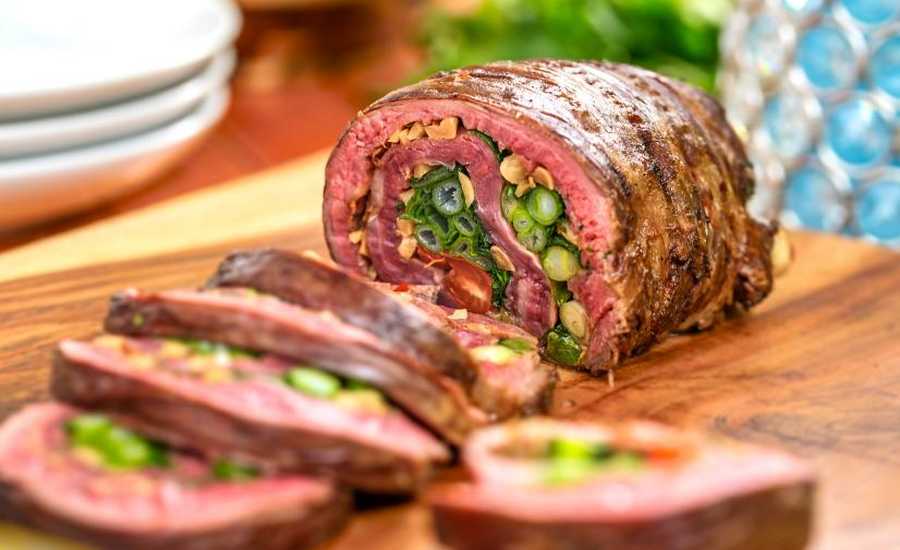 In the period of Peter and Catherine noble people began to adopt the culinary traditions of Northern Europe. Wealthy people at the beginning of 18th century brought cooks and chefs from Germany, Holland and Austria to Russia. Later, during the time of Catherine II, they brought in chefs from France and sometimes even England (hey, but wait a minute, isn't English food supposed to be terrible?). During this period, new dishes prepared from ground meat (rissoles, baked puddings, pates, beef-rolls), thick soups (from milk or vegetables) and different desserts were introduced in St. Petersburg and Moscow straight from Paris.

During this period, Russians adopted some Western European cold appetizers into the cuisine. For example, German sandwiches, butter, French and Dutch cheeses (formerly unknown in Russia) were combined with traditional Russian appetizers such as meat-jelly, ham, cold boiled pork, caviar and salted red fish and used as starters. 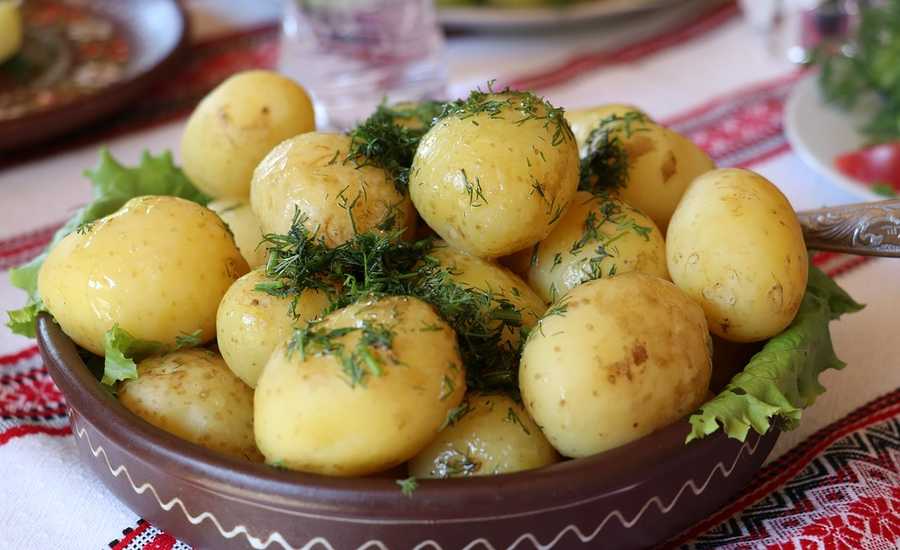 In the 19th century interest in the national cuisine of Russia appeared throughout Russia proper. This might be called the Period of All-Russian National Cuisine. Foreign and Russian cooks tried to revive traditions of Old Russian cuisine. One of the most famous cooks of this period was Marie-Antoin Carem, who accomplished a great deal by expediting the return of traditional Russian meals to the tables of the Russian aristocracy. He and other French chefs began to use potatoes as garnishes and to change meals formerly based in large part on ground meat to more natural beefsteaks, entrecotes, cutlets and chops. Also, these chefs worked hard to improve the taste of old Russian dishes: for example, they stopped adding flour to soups and ceased using sour rye dough in cooking, substituting the more delicate dough made from wheat flour.

The construction of railways and better roads led to closer relations between different Russian regions. As a result of this, the period of All-Russian national cuisine came into full swing with Russian people quickly becoming acquainted with the different cuisine of various far-flung Russian regions: ravioli from the Urals and Siberia, chicken pies and other dishes from the steppe, game-birds from the Don region, hunchback salmon from the Far East, venison from Murmansk and who could ever forget koumiss from Bashkiria. 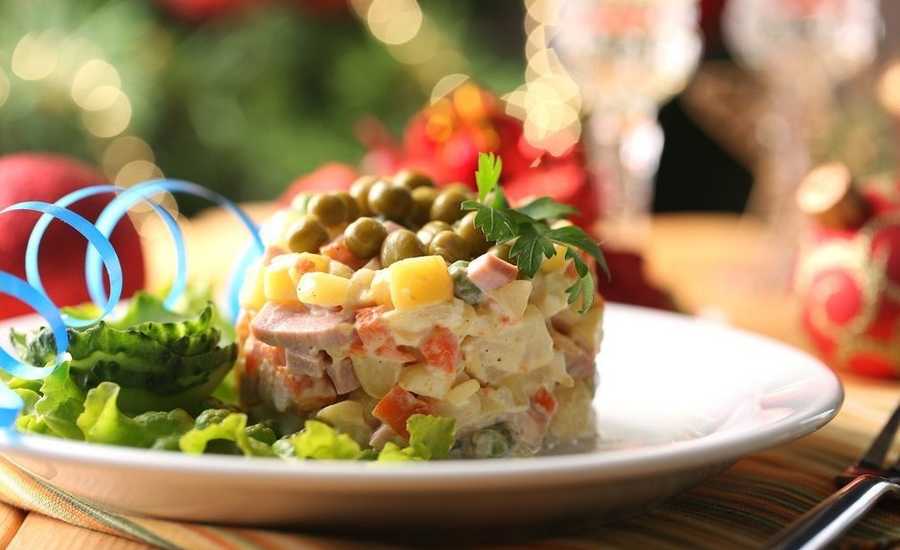 At last we come to the food of the Soviet Period. In the beginning of the 20th century, the Russian kitchen suffered due to the difficult political situation in the country, there were shortages and rationing. Public canteens were introduced in major cities during the 1930s and prewar 1940s. Special attention was paid to the preparation of dishes in these places and qualified cooks were employed to make quite decent food. After the war, during the 1960s and 1970s, the quality of food in public places deteriorated basically because the whole country was deteriorating, slowly but surely. At this time, people began to eat more meals made from eggs, poultry and semi-prepared meat products. Meals became quite simple, mainly because people didn't want to spend a lot of time for preparation (they were too busy standing in lines). 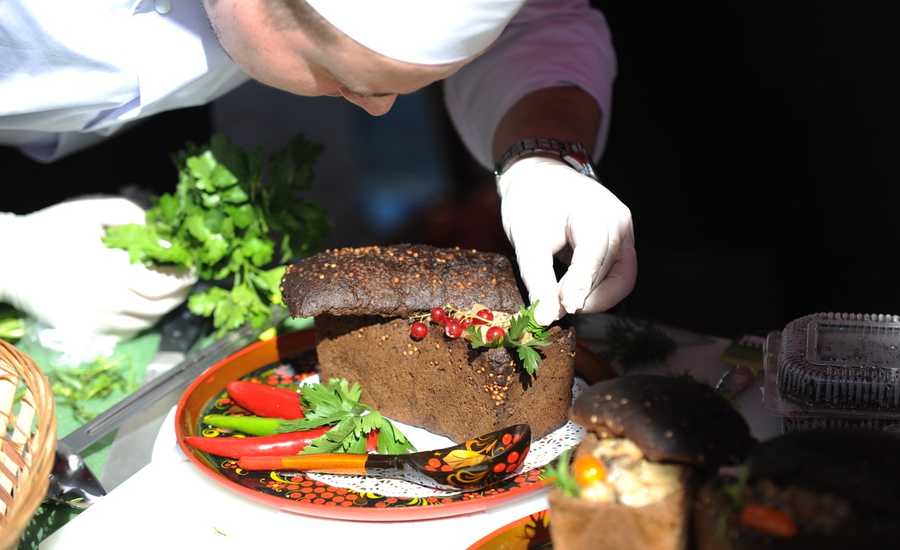 Today, Russian cuisine is very diverse. It combines traditional meals with dishes borrowed from European and Eastern countries. Come to Russia, give it a try. You'll like it, and if you don’t there’s always vodka. Here is a list of dishes we recommend to sample while in Russia.