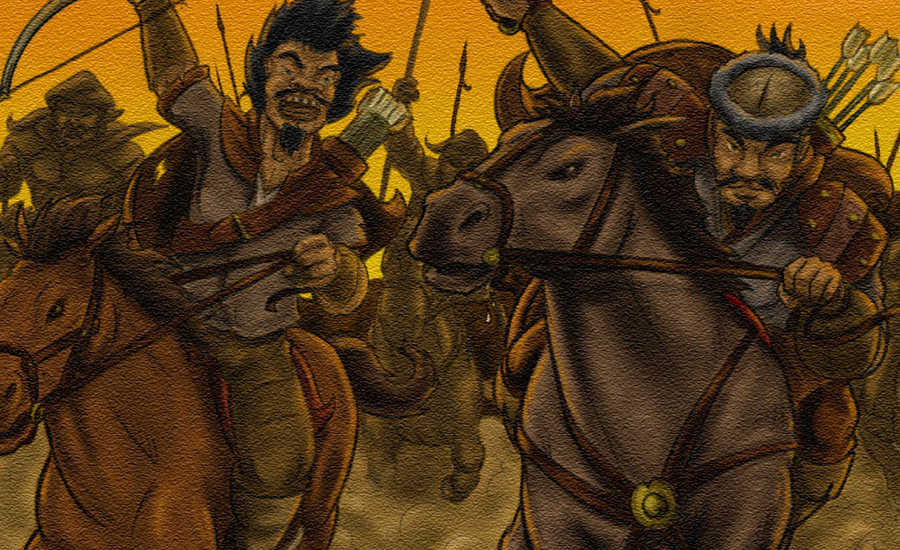 What happened to the Kievan Rus’ during the Mongol invasion of Europe?

The invading Mongols accelerated the fragmentation of the Kievan Rus’. In 1223, the Kievan Russian army faced a Mongol raiding party at the Kalka River and was soundly defeated. In 1240 the Mongols sacked the city of Kiev and then moved West into Poland and Hungary. By then, they had conquered most of the Russian principalities. Overall, Mongol reign over the Kievan Rus’ lasted for roughly 200 years. Of the principalities, only Novgorod escaped occupation. The city of Kiev was later used as the starting point for further Mongol attacks against Poland and Hungary, Transylvania and Moldavia. The impact of the Mongol invasion was not felt equally across the territories of the Kievan Rus’. Centers such as Kiev never recovered from the devastation of the initial attack, as the town was almost completely wiped out and the few remaining inhabitants had to rebuild it from scratch. Other places were left untouched. Immigrants who fled Southern Russia to escape the Mongols gravitated mostly to the Northeast, where the soil was better and the rivers more conducive to commercial development. It was this region that provided the nucleus of the modern Russian state in the late medieval period. However, Novgorod continued to prosper and a new entity, Muscovy, which would later become Moscow, began to flourish under the Mongols. Muscovy’s ruler, prince Yury, grandson of famous Russian conqueror Alexander Nevsky, even received the title of grand prince of Vladimir from his Mongol overlords in 1328. With this he was able to collect the tribute due for the Tatar Khan and thus strengthen Muscovy’s position and financial assets 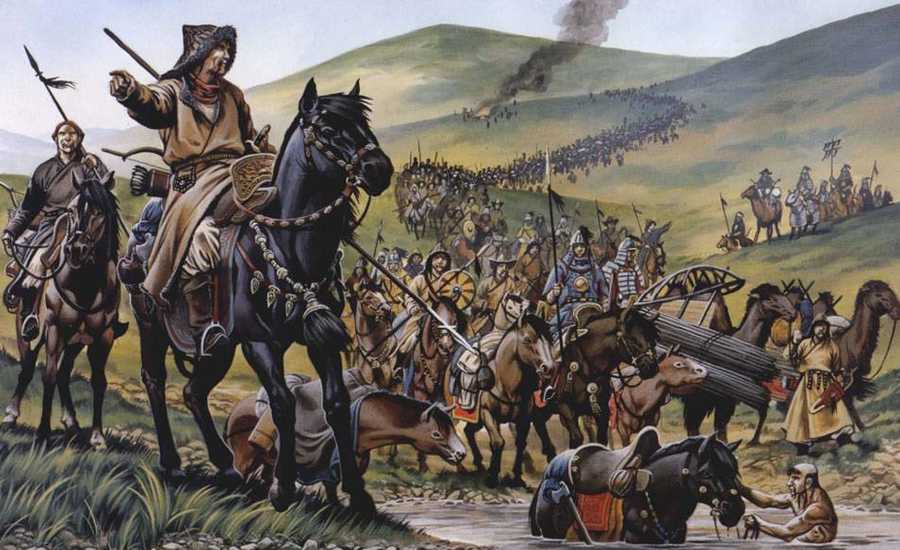 The Mongols dominated parts of the Kievan Rus’ from their Western capital at Sarai on the Volga River, near the modern city of Volgograd. The princes of Southern and Eastern Russia had to pay tribute to the Mongols, commonly called Tartars, or the Golden Horde; but in return they received charters authorizing them to act as deputies to the khans. In general, the princes were allowed considerable freedom to rule as they wished. One of them, Alexander Nevsky, prince of Vladimir, acquired heroic status in the mid-13th century as a result of major victories over the Teutonic Knights, the Swedes and the Lithuanians. Since Russia’s territories were vast and the Mongols attacked primarily the bigger and more important cities like Tiflis and Vladimir, impact on the nation as a whole was minimal. To the Orthodox Church and most princes, the Westerners seemed a greater threat to the Russian way of life than the Mongols. Nevsky obtained Mongol protection and assistance in fighting invaders from the West who, hoping to profit from the Russian economic collapse since the Mongol invasions, tried to grab territory. Even so, Nevsky's successors would later come to challenge the Tartar rule.

The Mongols left their footprint in areas like military tactics and the development of trade routes. Under Mongol occupation, Muscovy also developed its postal road network, census, fiscal system, and military organization. Eastern influence remained strong well until the 18th century, when Russian rulers made a conscious effort to westernize their country. Nonetheless, the long reign of the Mongols alienated Russia from Europe. This development had already been fueled by the previous East-West Schism in 1054, when the communion between what are now the Eastern Orthodox Churches and the Roman Catholic Church broke. 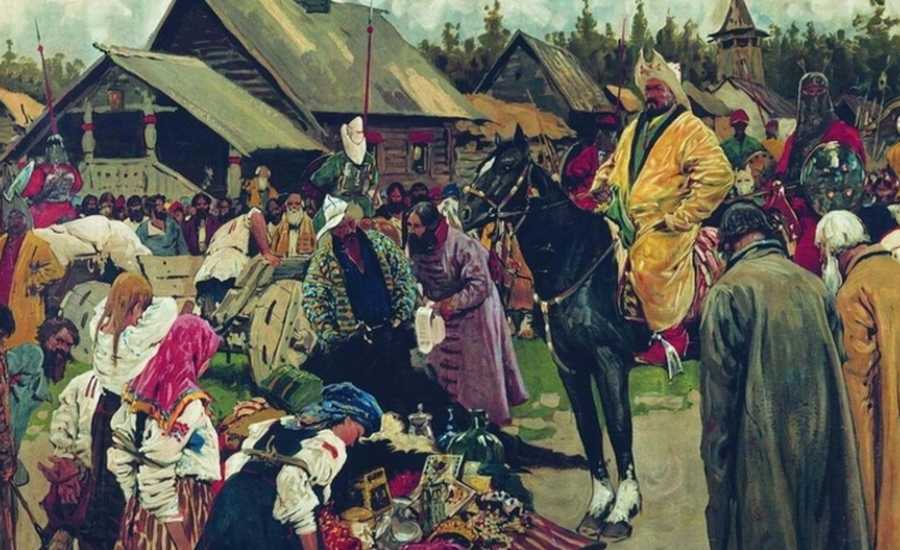 The Mongol invasion had different kinds of consequences for Russia and Europe alike, not all of them entirely negative. The most destructive one, however, is the advent and spread of the Black Death (1347-1352), which is said to have traveled with the Mongols from China. The plague killed over half of Europe’s remaining population, thus effectively dwarfing the casualties caused by the Asian invaders. On a brighter note, the Mongols created a novel link between the East and the West, making the faraway culture an accessible point of interest to travelers such as Marco Polo. The warriors also brought items such as paper, printing and compasses to the Europeans.

Thus it was the Vikings who established the first Russian dynasty of princes. More than that, the words "Russia" and "Russian", strange though it may seem, are probably of Norman origin. Some historians believe that the southern coast of Sweden from which Rurik came from was known as Ruslagen. That's why the author of the Primary Chronicle called the people living there the Ruses. But there are some historians who claim that the word "Russia" first appeared in the South, where the Ros River flows. According to some Byzantine and Arabic sources, the word "Russia" already existed before the Viking arrival in 862. It is impossible to say for sure how, when, and where the words "Russia" and "Russian" came from.

Returning to the story of the princes: Oleg put his Slavic, Viking and Finnish forces together and with a large army headed for Kiev. He proved himself to be not only a skillful warrior, but also a cunning man. Having arrived in Kiev, he ordered his men to hide under the boat and then told the town-dwellers that he was a merchant. When Askold and Dir, the Kievian rulers, came out to greet him, Oleg's warriors suddenly appeared and killed them. As for Oleg, he managed to seize power in Kiev, which he proclaimed the mother of Russian cities. Thus he managed to integrate northern and southern centers of East Slavic culture and establish a state. 882 is considered to be the year when Kievian Russia was born.

End of the Mongols 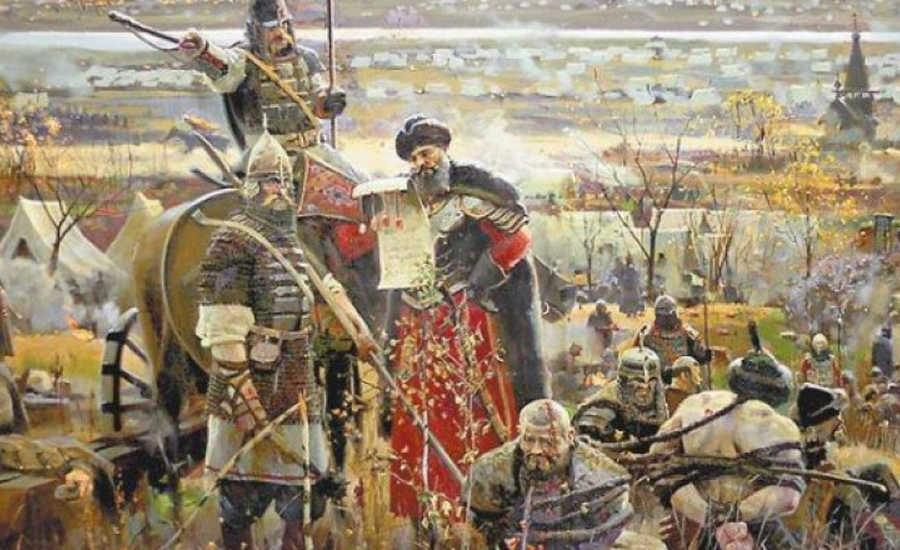 One of the reasons the Mongol invasions where put to an end was because their great leader, Ogedei Khan, had died in 1241. This meant that the commanders of the different Mongol tribes had to come together to choose a successor. Another reason why they ended their campaign might be that communication was becoming increasingly difficult, since information now had to travel from the far East of Asia all the way to places like Zagreb in Southeastern Europe. Also, Hungary, which was sought after for its grasslands, turned out to be not as suitable for their needs as the Mongols had hoped. The warrior’s main source of military power came from their large army of horses, which had to be sustained by equally large amounts of feed. Thus, instead of raiding the rest of Europe, the Mongols turned back East, where they channeled their energy in an effort to seize the Song Dynasty in China, which was eventually conquered during the rule of Kublai Khan between 1260 and 1294.

Read on to lean about the Moscovite Rule in Russia.