What’s the history of Pavlovsk? 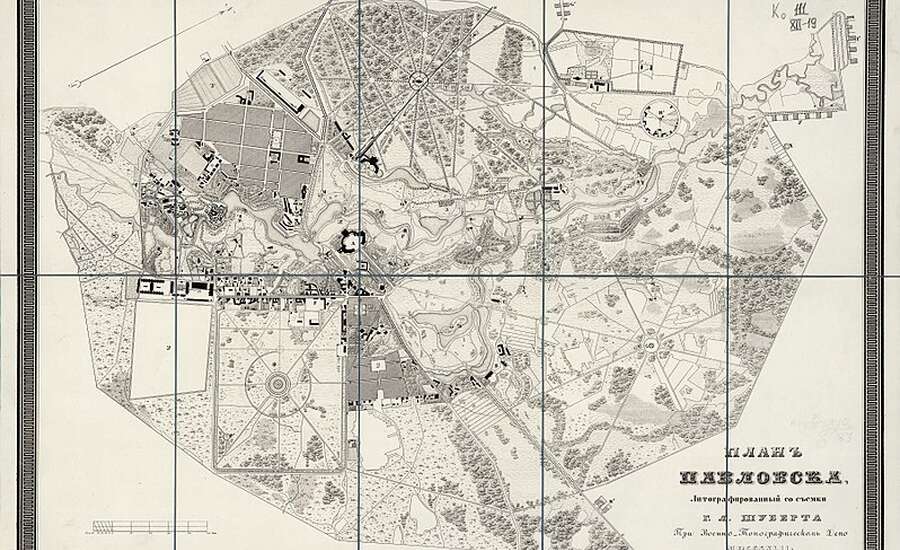 Pavlovsk has been inhabited as far back as ancient times, as its territory was rich in fish and game and it lay on a trade route that connected Russia with the Vikings and the Greeks. This forested land on the River Slavyanka continued to be used as a hunting ground for Russia’s rulers, and Catherine the Great gifted 600 hectares to her son, the future Tsar Pavel I, to celebrate the birth of his son Alexander in 1777. Originally, only two modest wooden houses were built, but over the next 50 years the magnificent ensemble of Pavlovsk was created.
Scottish architect Charles Cameron was invited to construct a royal palace surrounded by an English-style landscape park. At the beginning of construction, Pavel and his wife Maria Feodorovna travelled to Italy, France, Germany and Austria, where they gained much inspiration for their new estate. Following the murder of Pavel in 1801, Maria Feodorovna spent the rest of her days at Pavlovsk, and during this time the palace and grounds took the beautiful form we see today. The masters involved in constructing Pavlovsk’s palace and gardens included architects Vincenzo Brenna, Giacomo Quarenghi, Andrey Voronikhin and Carlo Rossi, sculptors Ivan Martos, Mikhail Kozlovsky and Vasily Demut-Malinovsky, and painters Pietro Gonzaga and Giovanni Battista Scotti.

Did you know? In the office on the first floor of Pavlovsk Palace is a screen from Pavel’s bedroom in the Mikhailovsky Castle in St Petersburg. Legend has it that on the night of his murder in the castle, Pavel tried to hide behind this screen, but the moonlight illuminated his silhouette and he was discovered by his assassins!

The park was designed with elements typical of English landscape gardens, such as Classical ruins and pavilions, picturesque bridges, water features, tree lined alleys and vistas, weaving artistic compositions into the natural forest and river landscape. The palace was decorated and furnished to the highest standard seen in Imperial Russia, and adorned with artwork and furniture brought to Russia by Pavel and his wife. Over the course of the 19th century an art gallery, museum of antiquities, library with thousands of scientific volumes, and even an observatory were established in Pavlovsk.

Did you know? Pavlovsk Railway Station was the third station to be built on Russia’s first railroad line, and to attract passengers to Pavlovsk, a music hall was founded inside the station! 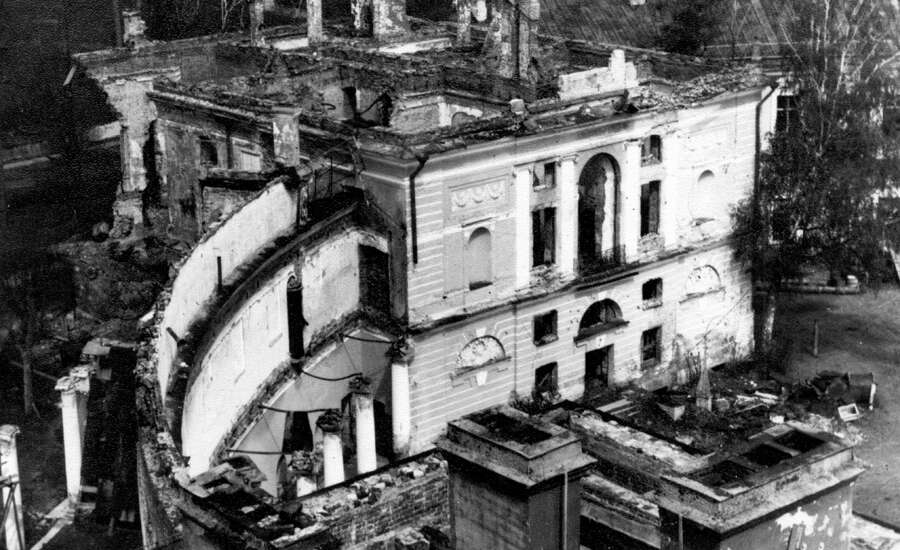 Following the October Revolution, the imperial residence of Pavlovsk was turned into a museum, alongside other suburban palaces of St Petersburg such as Gatchina, Peterhof and Tsarskoye Selo. Many exhibitions were subsequently held at Pavlovsk, and restoration work of the palace and gardens was undertaken.
Following the outbreak of the Second World War in Russia, the Nazis invaded Pavlovsk on September 17, 1941 and occupied it for the next three years. The palace and gardens were ruined, but Pavlovsk’s magnificent art collection had thankfully been hidden or packed up and evacuated to the Novosibirsk Opera House (alongside the collection of the Tretyakov Gallery and other institutions).

Did you know? Pavlovsk Palace housed the headquarters of the Gestapo during the Nazi occupation. Despite this, the Nazis never found the treasures concealed behind a fake wall in the basement of the palace!

Painstaking restoration work took place over the next three decades to return Pavlovsk to its original glory under Maria Feodorovna. Restoration was carried out with the help of archival materials and scientific research, and was so masterful that the key members of the team received the highest state prizes, and Pavlovsk was subsequently designated a UNESCO World Heritage Site in 1990.

What can you do at Pavlovsk today? 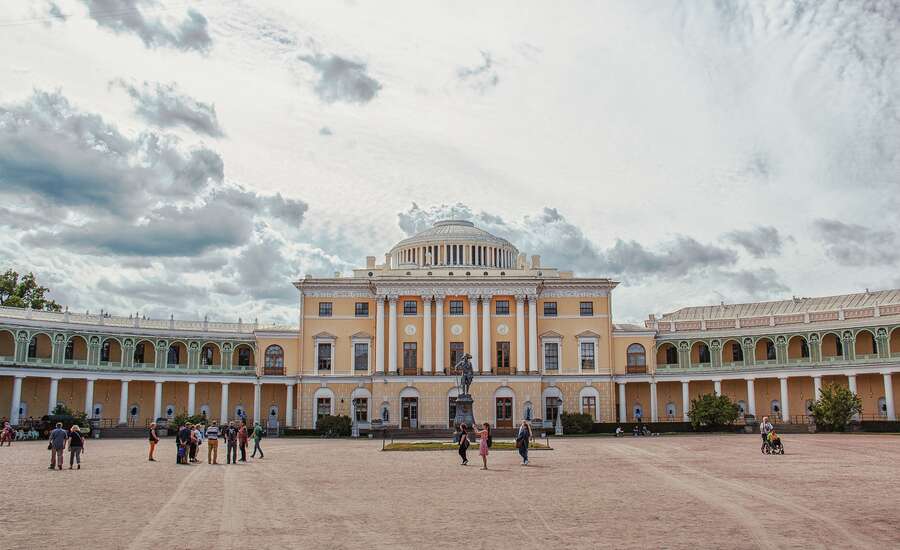 Photo by Elena Nechiporenko from Pixabay

Pavlovsk Palace is a wonderful example of Neoclassical architecture, remarkable for its proportions and refined décor. The cream-coloured palace takes the form of a horseshoe, with colonnaded galleries extending out to the wings and partially enclosing a large courtyard. The central building is three storeys high and topped with a large white dome.
Today, visitors can explore the imperial living quarters, grand halls, art gallery, photo gallery, and various exhibitions including the Costume Museum and Imperial Porcelain Museum. Particularly notable rooms are the Italian and Grecian Halls, the Hall of Peace and Hall of War, Throne Room, Library, Picture Gallery, and Cavalry Hall, which are lavishly decorated with coloured stone, gilding, and stucco moulding.
The imperial art collections that began to take shape under Pavel and Maria Feodorovna are on display throughout the palace halls. Among them are a rare collection of antique sculptures, a superb collection of Dutch, Flemish, Italian, German and French paintings, and examples of Western European and Russian decorative and applied art, porcelain, textiles and furniture. 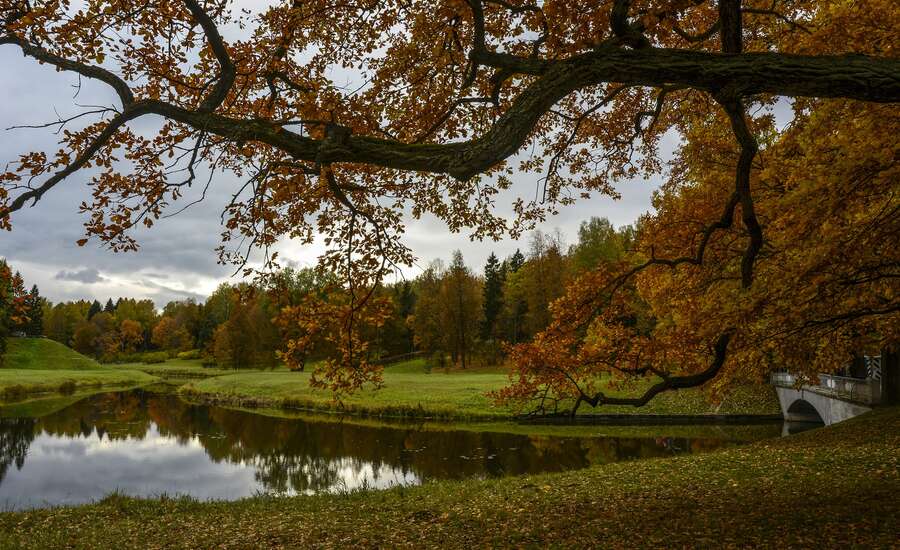 Photo by VolensNolens from Pixabay

Pavlovsk’s gardens are one of the largest landscape parks in Europe. They feature elements inspired by Classical architecture and mythology including a Colonnade of Apollo, rotunda Temple of Friendship Pavilion, Pavilion of the Three Graces, Amphitheatre, and a Grand Cascade reminiscent of ancient ruins. Pastoral buildings such as the Dairy Pavilion and Peel Tower are dotted around the grounds.
Features of French and Italian formal gardens are seen in the area closest to the palace, such as the Private Gardens, Great Circles, and Triple Alley of linden trees leading to the palace. Other interesting sites include the Music Pavilion surrounded by radial paths stretching into the forest, and the Pink Pavilion bordered by elegant rose gardens. A number of ornate bridges over the River Slavyanka allow for easy exploration of all corners of the park, and the forest paths wind around many small lakes and ponds nestled between the trees. 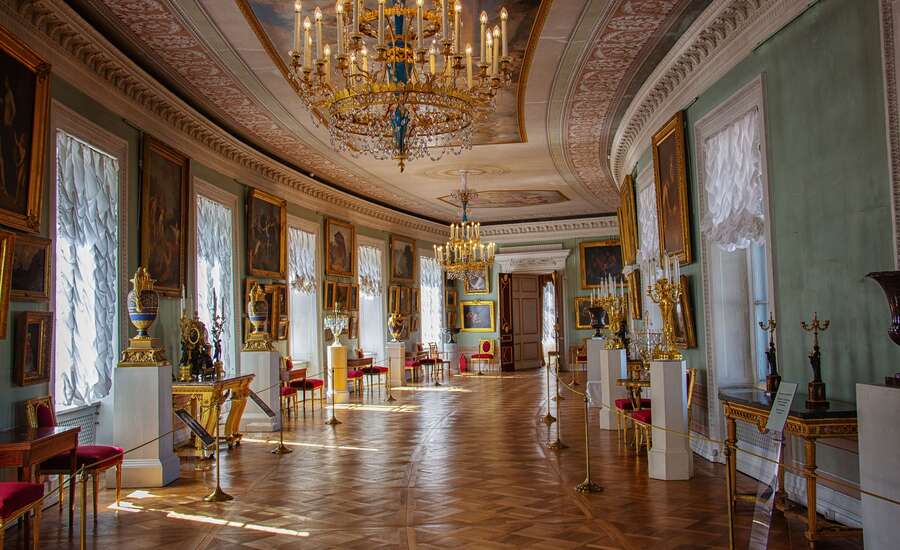 Photo by Elena Nechiporenko from Pixabay

Pavlovsk is a hugely popular site for activities and events in all seasons. Concerts, literature and art events are frequently held in the palace, park, and pavilions. Local and international festivals take place year round, including the Maslenitsa festival celebrating Russian Shrovetide. Visitors can hire a bicycle to explore the expansive park, or appreciate the true beauty of the Russian winter in Pavlovsk by renting skis or sledges, or even taking a snowy sleigh ride through the grounds on a traditional troika.

Essential information for visitors
Address and transport
Sadovaya Ulitsa, 20, Pavlovsk, St Petersburg, 196621
How to get there:
- By train from Vitebsky Vokzal or Kupchino to Pavlovsk (station is opposite the park entrance)
- By marshrutka (minibus) No. 286, 299, or 545 from Moskovskaya metro station. The marshrutkas wait behind the statue of Lenin in the square above the metro station. The trip takes around 35 minutes
- By private vehicle – on Express to Russia’s private tour to Pavlovsk, you will travel in your own vehicle with your guide
Contact information
Tel: +7 (812) 452-21-55
Website: hhttp://en.pavlovskmuseum.ru/
Email: palace@pavlovskmuseum.ru
Opening hours and tickets
Park: 06:00-21:00
Palace: 10.00-18.00 (ticket office from 10:00-16:30), closed on Fridays and first Monday of the month
Opening times and prices of different exhibitions vary, check website for further details 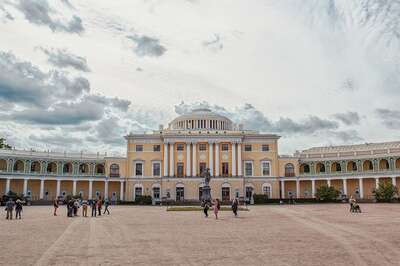 Built in the late XVIII and early XIX centuries, Pavlovsk’s palace and park was used as a summer residence for emperor Paul I and his family. The landscape park, one of the...