What is the history of the Pushkin State Museum of Fine Arts?

The Pushkin State Museum of Fine Arts boasts one of the richest collections of foreign art in Russia, showcasing global artistic developments from ancient times to the present day in expositions numbering 700,000 works of art. From its foundation the Pushkin Museum has operated not only as an exhibition platform but as a research and educational centre, engaging generations of people in art and world culture and promoting art as a discipline worthy of scientific research. 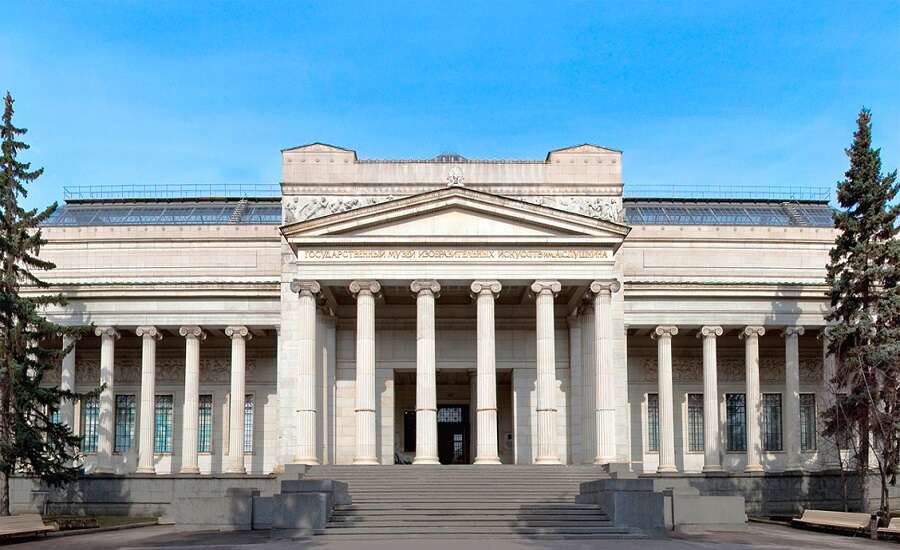 History of the Pushkin Museum of Fine Arts

The Pushkin Museum in Imperial Russia

In the mid-1890s Ivan Tsvetaev, Professor and Doctor of Roman Literature at Moscow State University, visited the Albertinum Art Museum in Dresden and was inspired by what he discovered there. Upon returning to Russia, Tsvetaev drew up a competition to be organised by the St Petersburg Academy of Arts, to design a Museum of Fine Arts in Moscow. 18 projects were submitted, and the design of young Muscovite architect Roman Ivanovich Klein was selected, which envisioned the museum as a majestic ancient temple reminiscent of the Greek Acropolis. In keeping with its exterior, specialists on ancient art, culture and architecture were commissioned to design the interior. The museum’s foundation was organised by a volunteer committee comprising history and philology professors at MSU, art collectors and the government, and was chaired by Grand Duke Sergey Alexandrovich.

Did you know? It was not planned to install electric lights in the Pushkin Museum of Fine Arts, as it was considered best to admire art in natural light.

The Museum of Fine Arts named after Emperor Alexander III was opened on 31st May 1912, with Ivan Tsvetaev as its director. The initial collection included exhibits from Moscow State University’s Cabinet of Fine Art, antiquities, foreign paintings, sculptures and decorative art, much of it donated from the private collections of Russia’s academics, statesmen, collectors and members of the royal family. Immediately after opening, the Pushkin Museum of Fine Arts was astoundingly popular and thousands of visitors flocked there every week. Aside from art exhibitions, lectures and excursions were held for university students and the public, channelling the museum’s purpose as a scientific and educational centre.

Did you know? Alongside original artworks, Tsvetaev ordered a huge number of plaster casts and copies of antiquities, artworks and architecture from all over the world, to give people the opportunity to see and study the development of world art.

The Pushkin Museum in Soviet Russia The Pushkin Museum of Fine Arts prospered after the Revolution. It was separated from the activities of Moscow State University (by that time under the ideological control of the Soviets) and designated an independent art museum. Between 1924 and 1930, artwork from Moscow’s nationalised noble and royal estates, from many of the city’s liquidated museums, and from the State History Museum, Kremlin, Tretyakov Gallery and State Hermitage was assimilated into the museum’s collection.

Did you know? In 1937 the museum was renamed in honour of Alexander Pushkin, to commemorate the 100th anniversary of the great poet’s death.

Upon the outbreak of the Second World War, the greater part of the museum’s expositions was evacuated to Novosibirsk and Solikamsk in Siberia to save it from destruction. Reconstruction of the damaged museum began in 1944, and in the post-war period the Pushkin Museum’s activities continued with renewed vigour. Its collection continued to expand with artwork acquired by the Soviet soldiers during wartime and world-famous artworks by Western-European and American masters of the second half of the 19th and the early 20th centuries.
Did you know? In 1974, the Mona Lisa was exhibited at the Pushkin Museum of Fine Arts. This was the last time that Da Vinci’s famed painting left France!

The Pushkin Museum in Russia today Photo by user:Ghirlandajo  on Wikipedia

There is an ongoing project to create a ‘Museum Quarter’ on the site of the Pushkin Museum, and by its completion in 2023 nine museums will operate there. Today the museum continues to place emphasis on educational and research projects, having opened an educational art museum, educational centre, and holding art and art history programmes for all ages alongside regular excursions and lectures. The Pushkin Museum is also home to a manuscript and archive fund, special scientific library, and scientific and restoration workshops.

What can you see at the Pushkin State Museum of Fine Arts today?

What can you see at the Pushkin Museum of Fine Arts?

At present the collections of the Pushkin Museum of Fine Arts constitute more than 700,000 works of art spanning from Ancient Egypt to the 21st century. They include paintings, sculptures, graphic art, engravings, decorative and applied art, icons, mosaics, glasswork, archaeological artefacts, numismatic items, and photography; additionally, there is a vast collection of tinted plaster casts commissioned by Tsvetaev during the Pushkin Museum’s time as part of Moscow State University. Aside from the permanent collections and temporary exhibitions showcasing work from the Pushkin Museum and international institutions, the museum organises a rich cultural and educational programme of lectures, excursions, concerts, masterclasses, and more.

The 30 halls of the main building comprise exhibitions from many historical eras. On the ground floor, a number of halls are dedicated to German, Flemish and Dutch art from the 15th-17th centuries and include work by Rubens, Van Dyck, and Rembrandt. The majority of the ground floor is occupied by one of the world’s largest collections of Ancient Egyptian and Greek art, which was part of the museum’s original collection and displayed the latest archaeological discoveries at the time of the museum’s founding. This includes art and antiquities from Ancient Egypt, Greece (including objects from the archaeological excavation of Troy), Rome, Byzantium, and the Middle East, as well as impressive plaster casts of important architectural and sculptural features from these periods, some of which is exhibited in the impressive Greek and Italian Courtyards.
The first floor houses Italian, French and Spanish art from the 17th-19th centuries, as well as a huge number of casts of famous Dutch, German and Italian sculptures from the 15th-16th centuries, of Ancient Greek and Roman art and artefacts, and of Western European and Byzantine religious sculpture and architecture from the 5th-15th centuries.
Address: Ulitsa Volkhonka, 12, Moscow, 119019
Opening hours: Tuesday – Sunday 11:00-20:00; Thursday and Friday 11:00-21:00 (ticket office closes one hour prior). Closed on Mondays. 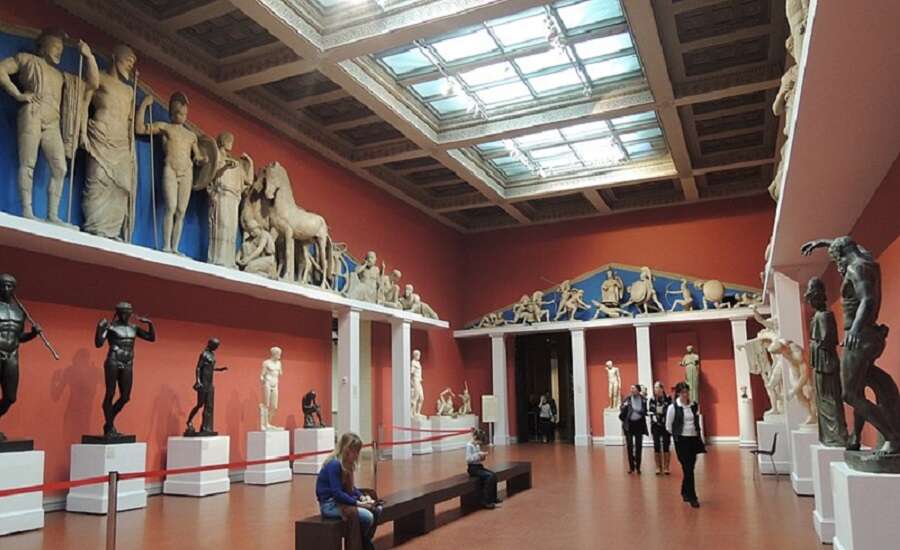 26 halls of the gallery represent various trends, schools and evolving artistic eras in European and American art. The exposition includes work by the Nazarene artists of German Romanticism, works of the Paris Salon, Realist paintings of the Barbizon School, and Symbolism of the Nabis group. The majority of the halls are occupied by a particularly brilliant collection of French Impressionist and Post-Impressionist work, including masterpieces by Monet, Renoir, Matisse, Degas, Toulouse-Lautrec, Cezanne, Van Gogh, and Picasso.
Address: Ulitsa Volkhonka, 14, Moscow, 119019
Opening hours: Tuesday – Sunday 11:00-20:00; Thursday and Friday 11:00-21:00 (ticket office closes one hour prior). Closed on Mondays. 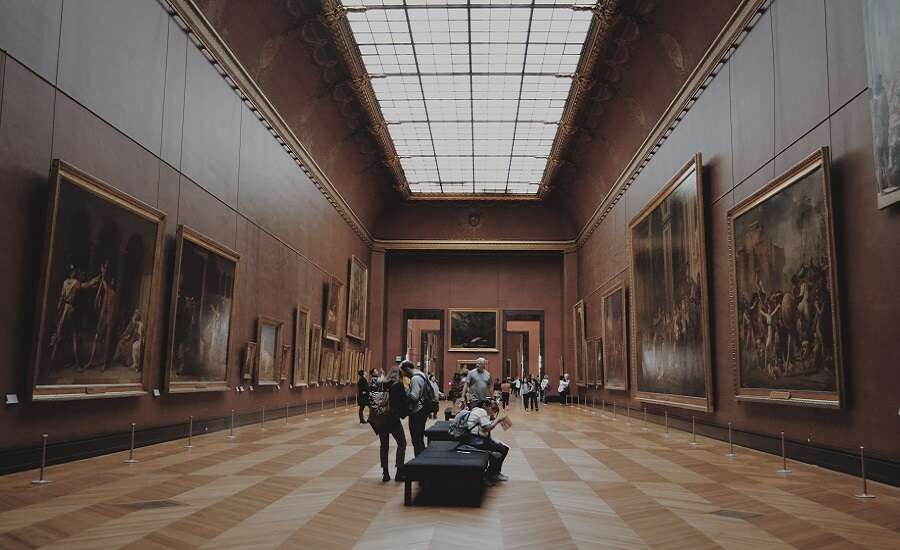 Photo by Amy-Leigh Barnard on Unsplash

The 23 halls of this gallery exhibit complete collections of artworks donated to the Pushkin Museum by private collectors, which have not been dissipated into larger exhibitions. The exposition includes the multidisciplinary collection of the gallery’s founder Ilya Zilberstein; Avant-Garde paintings of David Sterenberg; the collection of Viktor and Clara Lebedinsky which includes pieces by Isaac Levitan and Boris Kustodiev; the Post-Impressionist paintings of Leonid Pasternak, father of author Boris Pasternak; Elena Makaseva’s collection of fine and decorative art from 19th century Russia’s ‘Golden Age’; icons from the collections of Mikhail Chuvanov and Tatyana Mavrina; and Fedor and Ekaterina Lamkul’s astounding collection of glasswork.
Address: Ulitsa Volkhonka, 14, Moscow, 119019 Photo by Eric Park on Unsplash

This branch of the Pushkin Museum is located in the Russian State University for Humanities. It exhibits one thousand plaster casts which were not included in the main exposition of the Pushkin Museum, including art and artefacts spanning four millennia of human history from ancient Egypt, Greece, Rome, and Western Asia to the Middle Ages and Renaissance Italy. In continuity of the Pushkin Museum’s direct link with education, the casts present in this exposition are studied by students today.
Address: Main building of Russian State University for Humanities, Chayanova Street, 15, Moscow, 125047
Nearest metro: Novoslobodskaya (420m)
Opening hours: Tuesday – Saturday: 10:00-17:00 (ticket office closes one hour prior). Closed on Sundays and Mondays. 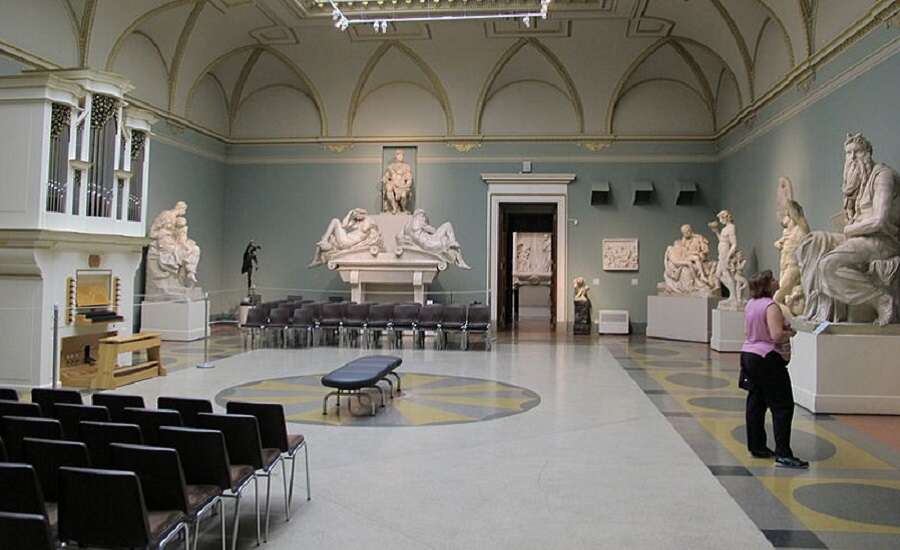 Photo by Shakko on Wikipedia

The National Centre for Contemporary Art only became part of the Pushkin Museum of Fine Arts in 2020, and is part of a network of eight contemporary art centres across Russia. The NCCA supports local artists, and is involved in Russian and international projects and competitions with a strong influence on the development of modern Russian art. In addition to its exhibition activities the NCCA organises educational programmes, concerts, film screenings and other cultural events.
Address: Building 2, Ulitsa Zoologicheskaya, 13, Moscow, 123242
Opening hours: Daily 12:00-20:00
Nearest Metro: Barrikadnaya/Krasnopresnenskaya (800m) Cathedral of Christ the Saviour – The largest church in Moscow is situated just across the road from the Pushkin Museum. Visitors can admire its gorgeous interiors and visit the observation deck.

State Museum of Alexander Pushkin – This museum is dedicated to Russia’s favourite poet (try not to confuse it with the Pushkin Museum of Fine Arts…), and comprises exhibitions about his life and work, and art from the 18th and 19th centuries.

Tretyakov Gallery – After getting your fill of foreign art, head over to the Tretyakov Gallery across the River Moskva to see a millennia of Russian artwork in one of the world’s finest art museums.