Cathedral of Christ the Saviour, Moscow

What’s the history of the Cathedral of Christ the Saviour?

The Cathedral of Christ the Saviour during Imperial Russia 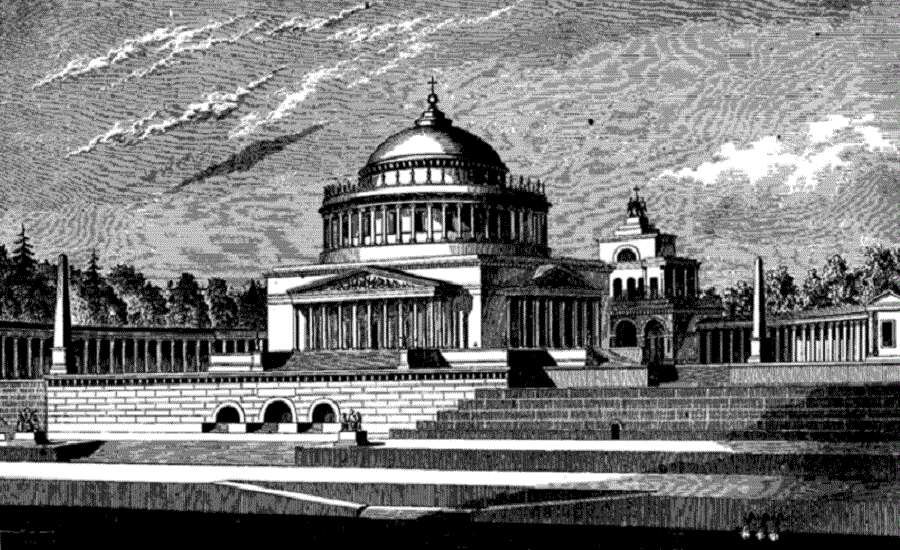 Photo by Alexander Vitberg on Wikipedia

The history of the Cathedral of Christ the Saviour begins on 25th December 1812, when the last soldiers of Napoleon’s 600,000-strong army were driven out of Russia. Emperor Alexander I ordered the construction of a magnificent cathedral dedicated to Christ the Saviour, to give thanks to God and to honour the victorious Russian people and their faith in God and their Fatherland.

Tsar Alexander I organised competitions to find a design for the cathedral, entered by the era’s most eminent architects including Giacomo Quarenghi, Konstantin Ton, and Vasily Stasov. In the end, Karl Vitberg’s Neoclassical design was selected by the Tsar (an unusual choice as Vitberg was a painter not an architect, and a Freemason not an Orthodox believer). The first stone was laid on Sparrow Hills in October 1817, but the unstable soil and underground streams made Sparrow Hills an unsuitable site for such a monumental project.
After the conservative and Orthodox Tsar Nicholas I acceded to the throne in 1825, Vitberg’s design was rejected and he was put on trial for embezzlement of funds and exiled to Siberia. Konstantin Ton was appointed as chief architect, his Russian-Byzantine cathedral design more in line with Nicholas’ wishes. The cornerstone for the new cathedral was laid on 10th September 1839 on the banks of the Moskva River.

Did you know? The world premiere of Tchaikovsky’s 1812 Overture was performed outside the cathedral in 1882.

70 years since its conception, and after passing through the hands of 4 tsars, the Cathedral of Christ the Saviour was completed. It was even taller than the Kremlin’s Ivan the Great Bell Tower, which up until this point had been the tallest building in Moscow. The Cathedral of Christ the Saviour was consecrated on Ascension, 26th May 1883, which coincided with Alexander III’s coronation. Regular services were conducted in the cathedral from this time onward, and important events such as coronations, anniversaries and church holidays were marked there.

Did you know? The Alekseevsky Convent had stood on the proposed site of the cathedral, and was demolished. It is said that the Abbess of the convent cursed Tsar Nicholas, saying ‘nothing will stand here for longer than 50 years, not a church nor a sovereign’…

The Cathedral of Christ the Saviour during Soviet Russia 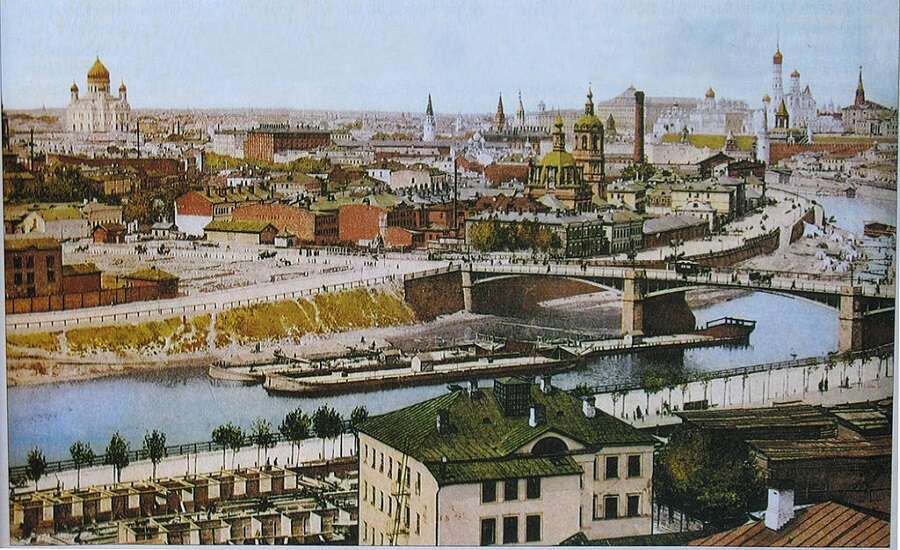 After the October Revolution, the Cathedral of Christ the Saviour was for a while preserved. The Brotherhood of the Temple was created, which included parishioners and clergy who would maintain the cathedral, conduct services, and continue educational, social and charitable activities – on top of its religious activities, the cathedral had become a centre of education in Moscow, with an excellent library and education courses for the public.
But the cathedral’s activities soon ceased for good. Anti-religious activity was increasing towards the end of the 1920s, with the looting and destruction of churches throughout Russia. At the same time, the Soviet authorities were devising their own architectural plans, in particular the construction of the grandiose 420-metre Palace of the Soviets crowned with a 100-metre tall statue of Vladimir Lenin, intended as a monument to victorious socialism and the leader of the world proletariat.
A new Moscow, with no vestiges of the ‘cursed past and its monuments’, was to arise around this palace. And the chosen site for the palace – the Cathedral of Christ the Saviour. At the personal decision of Stalin, the demolition of the cathedral was arranged for 5th December 1931. A massive wave of propaganda preceded the destruction, which decried the cathedral as ‘grotesque and totally inartistic’ and ‘a poisonous mushroom on Moscow's face’. The Cathedral of Christ the Saviour was dynamited.

Did you know? Some of the marble from the destroyed cathedral was used to decorate Kropotkinskaya, Teatralnaya and Okhotny Ryad metro stations.

The Palace of the Soviets was never built. Instead, a yawning pit remained on the site of the former cathedral until 1958, when an enormous swimming pool was built – the largest outdoor pool in the USSR.

The Cathedral of Christ the Saviour during Post-Soviet Russia 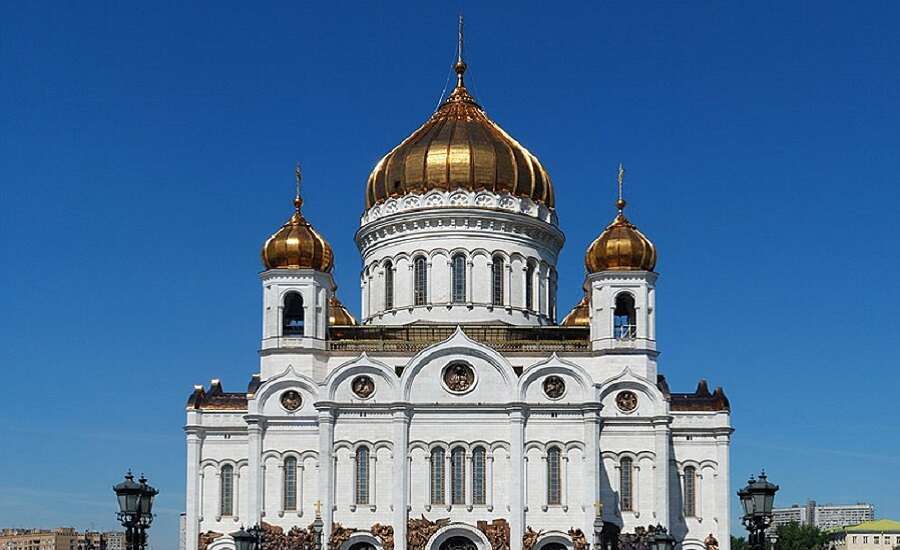 Photo by Alvesgaspar on Wikipedia

After discussions in the late 1980s over the reconstruction of the Cathedral of Christ the Saviour, the Holy Synod of the Russian Orthodox Church finally received permission from the Soviet authorities. Yeltsin himself signed a decree placing the cathedral in first-place priority on the list of reconstructions in Moscow. A foundation stone was laid on 5th December 1990, 59 years after the cathedral’s demolition. Reconstruction began in 1994, and the cathedral was finally consecrated on 19th August 2000.

Did you know? Pussy Riot’s infamous performance of Punk Prayer was staged in the cathedral in February 2012. The three women involved were convicted of ‘hooliganism motivated by religious hatred’, and sent to prison.

What can you see at the Cathedral of Christ the Saviour?

Despite its monumental size the Cathedral of Christ the Saviour is a beautiful and proportionate sight. It was constructed in Russian-Byzantine style, rooted in the traditions of ancient Russian church architecture, and influenced by the strict and harmonious symmetry of Classicism. Konstantin Ton’s design was inspired by the features of other churches such as the Kremlin’s Dormition and Archangel Cathedrals, cathedral of the Donskoy Monastery, and Church of the Ascension in Kolomenskoye.

Did you know? The cathedral is the largest Orthodox church in Russia and the second largest in the world, and can accommodate 10,000 worshippers.

The cathedral is shaped as an equal-sided cross overlaid with a square. Four smaller domes sit atop each corner of the square, and a huge golden cupola over the centre. Each side of the cathedral is fronted by six columns topped with five semicircular kokoshniks. A porch of dark red granite leads to the entrance doors on each side, and the large bronze doors are engraved with images of saints and guarded by statues. The cathedral is faced with gleaming white marble.

See the Church of Christ the Saviour and many other famous landmarks on Express to Russia's Moscow city tour. On the tour, you will hear fascinating stories, legends and facts associated with these landmarks and the city itself. 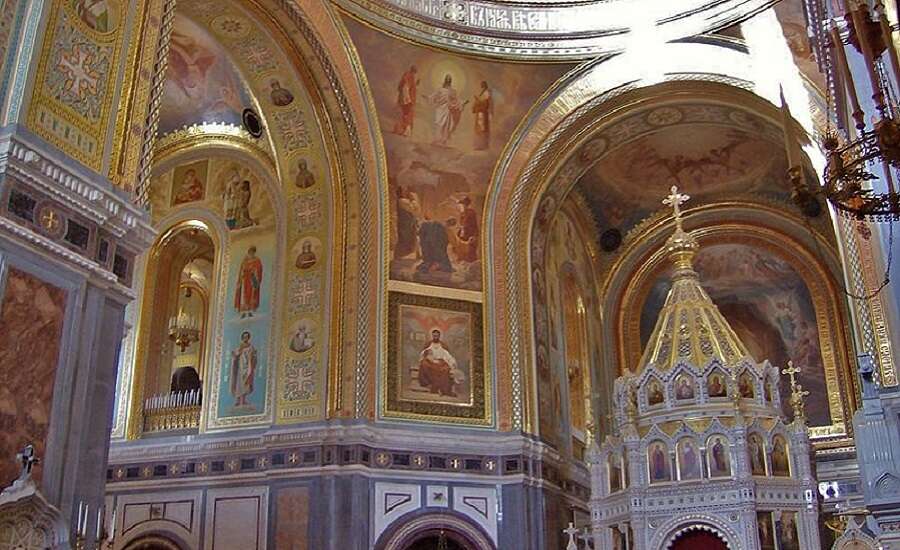 Photo by Marijan on Wikipedia

The interior of the Cathedral of Christ the Saviour was recreated by masters from the Russian Academy of Arts, and even rivals that of St Isaac’s Cathedral in St Petersburg. As icon-painting schools had been abolished under the Soviets, a special school of historical religious painting was established to allow for redecoration of the cathedral. The cathedral is adorned with paintings of Biblical scenes, figures, and imagery, important people from Russian religious history, and the princes of ancient Russia, offset with borders of geometric patterns which appear almost as optical illusions. The main iconostasis is an octagonal chapel crafted from white marble and crowned with a gilded tented roof, its icons showing the Nativity. It is an incredibly beautiful four-tiered iconostasis decorated with layers of kokoshniks, intricate metalwork, carvings, and inlaid with coloured stone.

Did you know? The interior of the Cathedral of Christ the Saviour is embellished with 9000m2 of gold leaf.

Corridors around the edge of the cathedral contain galleries dedicated to the events of the Patriotic War of 1812. Hundreds of marble panels are engraved with descriptions of the battles of the war and the names of soldiers killed and wounded. 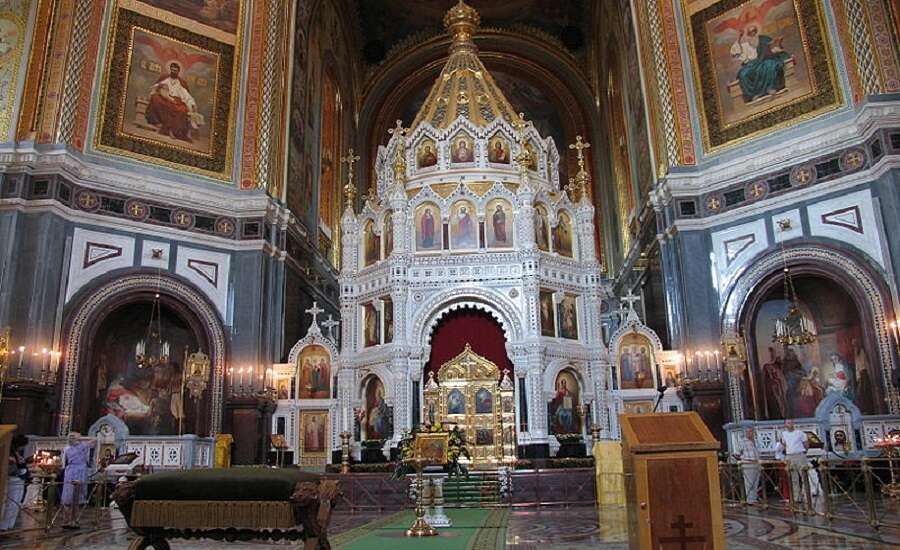 Photo by Brücke-Osteuropa on Wikipedia

In the basement of the cathedral is the Transfiguration Church, which was built in honour of the Alekseevsky Convent which had formerly stood on the site of the Cathedral of Christ the Saviour. Its decoration is more similar to that of ancient Russian churches. It has vaulted ceilings decorated with religious imagery, three altars, and a large iconostasis reaching right up to the ceiling, home to some rare ancient icons.

Did you know? The largest bell of the Cathedral of Christ the Saviour weighs 29.8 tons, and only rings four times per year on the most important Orthodox holidays. 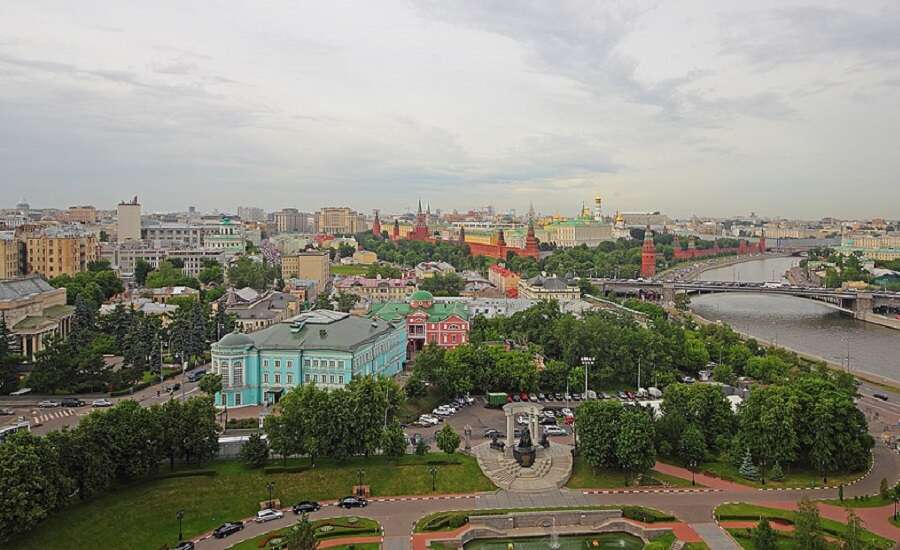 The Cathedral of Christ the Saviour is home to an observation deck 40 metres above the ground, which stretches around the entire cathedral between the bell towers and offers a panoramic view over the city for miles around. Visitors can admire the layers of different architecture comprising Moscow’s sprawling cityscape and get a view of the Kremlin, Monument to Peter the Great, Moskva River and Patriarch’s Bridge, Seven Sisters skyscrapers, Pushkin Museum of Fine Arts, New and Old Arbat districts… the list goes on. Visit on a clear day if possible, and make sure to use the free binoculars installed on the decks for the best view. 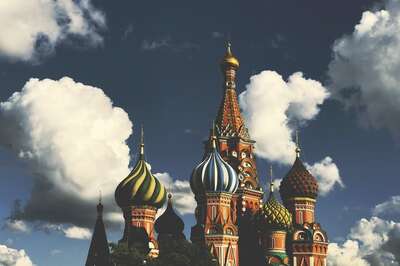 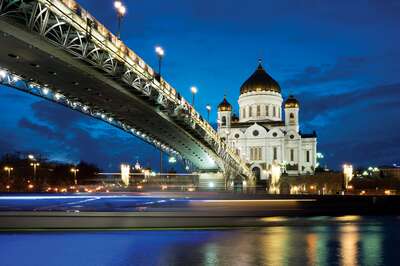 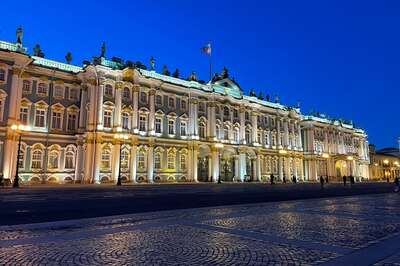