Once you have worked it out, the public transport system in Moscow is incredibly efficient, if not always comfortable. The quickest way to travel around the city is undoubtably by metro, but if you want to actually see the city, experiment with the city's above-ground transport, which includes a vast system of trams, jolly trolleybuses (some with curtains), hard-working buses and cosy communal taxis, called marshrutki. You can also try your luck with official and expensive taxis, or catch a cheaper ride with a gypsy cab - usually a Lada, and driven by a local looking to make some extra cash. The city's famous imperial suburbs are well serviced by suburban trains (electrichki) and marshrutki.

If the weather allows it is just as well to forget about public transport and go by foot. No matter how gemütlich the trolleybus or socially enlightening the marshrutka, nothing can beat a reflective stroll along one of the city's many picturesque canals.

While above-ground transport is generally preferable for short trips around the city centre, visitors should certainly try the metro at least once, especially when travelling further afield. The metro also more than occasionally offers up architectural or design wonders and, in peak hours, an insight into the irreproachable manners of Moscow's residents. If you want to be really well-informed, read our tips on riding the metro.

The first subway line in Moscow appeared in 1935. The underground lines were under construction ever since, with no interruption throughout the war period in the 40s when the metro stations served as the safest bomb shelters in the city. Presently Moscow metro represent one of the longest and broad network of underground lines in the world. It consists of 11 lines (over 260 km long) with 160 stations. Daily up to 10 million passengers use the metro trains for traveling around the city. The stations operate from 5:35 am - 1:00. 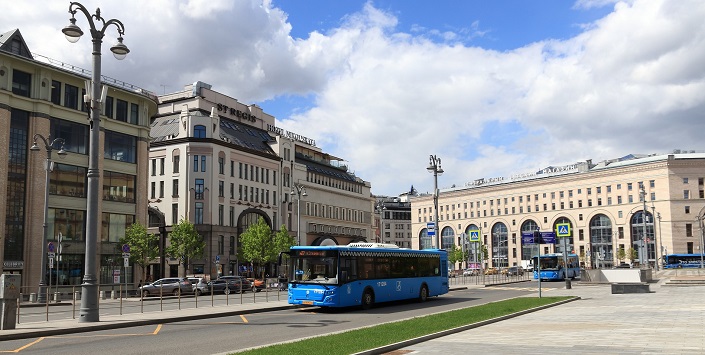 Bus stops are identified with the big letter "A" (for avtobus). The buses are slowly getting updated but you can still ride some of the old, cold, smelly ones if you are lucky. You can buy tickets onboard from the conductor.

Trolley bus stops are identified by the big letter "Т" (trolleibus). Russians really like trolleybuses - they say that they m ore "ecologically friendly" than the regular buses, which I guess is true - it all depends on how you produce the electricity. Some of them have curtains, making for a pleasant, home-like journey (when they're not bursting at the seams and leaking). You can buy tickets onboard from the conductor.

Trams are a novel way to get around Moscow. To find the tram stops look for the "T" (tramvai). You can buy the tickets onboard from the conductor

It was in 1925 that Muscovites for the first time saw taxis in the streets of the city. Those were French Renaults and Italian Fiats, later in 1932 replaced by domestically produced Gaz-A cars. Until the 90s all the vehicles were owned by the state and among several taxi depots. Now following the new regulations issued by the city authorities, a taxi can be owned both officially and privately and as such any domestic or foreign model may be used.

In Moscow taxis are usually overpriced. In provincial cities the situation is different and the taxis are usually more reasonably priced. As with taxi drivers all over the world, keep track of what they are doing and don't trust the meters so much. It is always better to negotiate the price before you get in rather than relying on a meter. A great alternative to official taxis are gypsy cabs. These are just regular people in their regular cars that are out to make a buck. It is the Russian equivalent of American hitch hiking but in Russia, you always pay. This is how it works; stand at the curb and put your arm out. Cars will begin to stop for you. As with taxis, always negotiate the price beforehand. Also, be a little careful, it is best to not get into a car with more than 1 man in it or to get into a car with suspicious looking characters. Furthermore, if you are a single female, it's better to call or flag an official taxi if traveling at night just to be on the safe side.

There are many mini van route taxis called marshrutki around the cities. These are much more comfortable and efficient vs. the typical above ground public transport. Again, their routes are all written in Russian so study them well before getting on. The best way to find out if the bus is going your way is to simply stop it, open the door and ask if it goes to the place that you need to reach. In this case you just need to know the name of the place or the street where you are going. These mini vans usually stop at official stops such as metro stations and near regular bus or trolley stops but you can also flag them down. You see them all over the place - just stick out your hand and wave. When you get in hand the driver the fare and go.