What can you do at the Jewish Museum and Tolerance Centre? 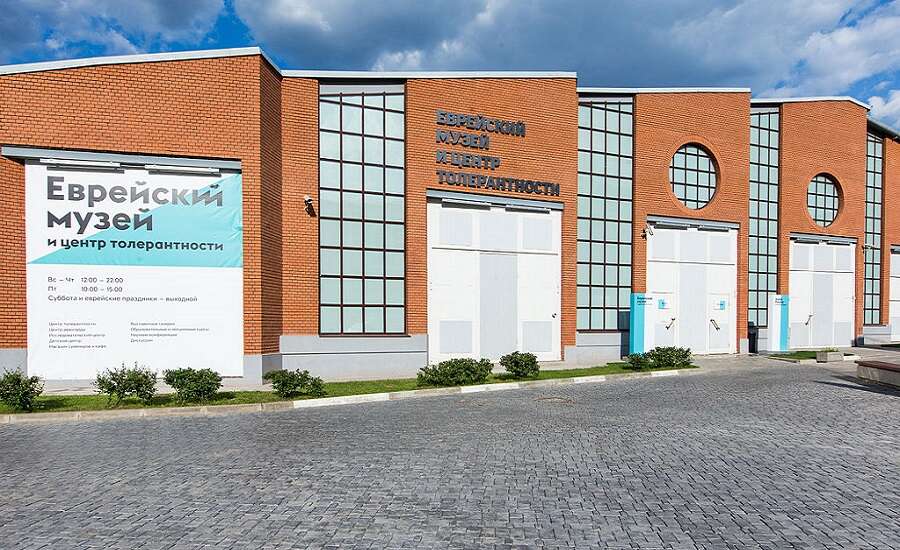 The Jewish Museum and Tolerance Center chronicles Jewish culture and history in Russia from the reign of Catherine the Great up until the present day. As well as a museum it is a cultural centre, focussing not just on the past but on the present and future of the Jewish population of Russia, and working to educate visitors and encourage dialogue and understanding between different cultures.

History of the Jewish community in Russia 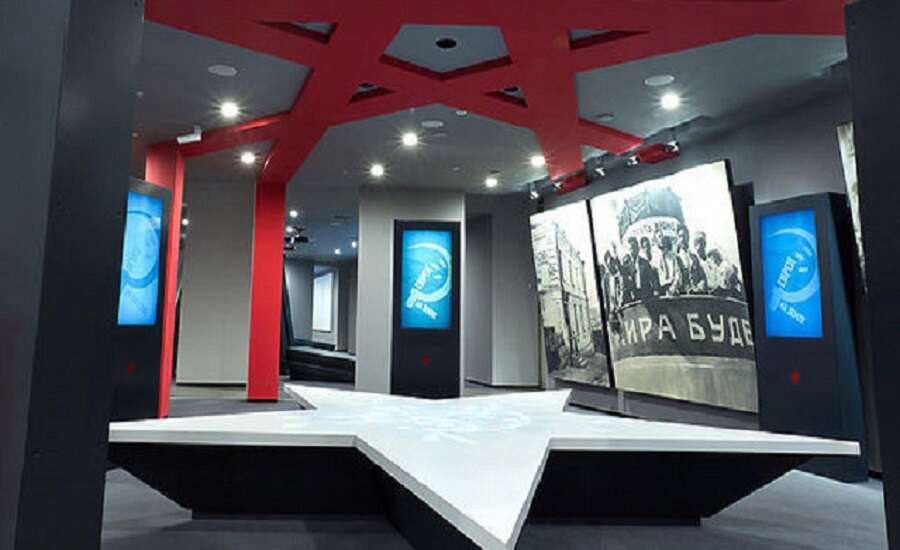 The situation changed when Catherine the Great came to the throne in 1762. The three Partitions of Poland in the mid-to-late 1700s saw large swathes of Polish and Lithuanian territory assimilated into the Russian Empire, and with them nearly 1 million Jewish people living in these regions. As a result, in the 1790s Catherine established the ‘Pale of Settlement’ in the western Russian Empire, which covered much of modern-day Belarus, Lithuania, Moldova, Ukraine, Latvia and Poland. With some exceptions, Russian Jews were forbidden to settle outside of the Pale of Settlement until 1917.

Did you know? This is where the phrase ‘beyond the pale’ originates from, meaning beyond the boundaries of a safe place.

Political and religious oppression against Russian Jews fluctuated in the 19th century, and more and more Jewish people assimilated into Russian society. But following the assassination of Alexander II in 1881, Jews were scapegoated, and large violent riots known as pogroms targeted Jews in Ukraine.

Alexander II’s son and successor, Alexander III (1881-1894) was a reactionary and repressive  ruler. Jewish rights to political involvement and education were restricted and their land ownership or settlement outside the Pale was forbidden.

By 1897, the Russian Empire was home to the largest Jewish population in the world, numbering over 5,000,000 people. Yet these oppressive laws remained in place during the reign of Nicholas II (1894-1917) and the rise of popular antisemitism continued, leading to particularly violent pogroms between 1903-1906. Antisemitism was fuelled by the 1903 publication of a hoax document, The Protocols of the Elders of Zion, outlining a Jewish conspiracy to control the world.

In response to the Tsarist government’s antisemitic policies, Jews of all social classes joined revolutionary movements in the 20th century. Many leading members of the Bolsheviks were ethnically Jewish, leading anti-Semites and anti-Bolsheviks in Russia and abroad to conflate Communism with Jewish interest. This gave rise to the antisemitic and anti-Communist notion of ‘Jewish Bolshevism’, which was later used by Hitler to justify Nazi policy.

Did you know? Pogrom means ‘devastation’ in Russian, and it entered the English language to describe 19th and 20th century attacks against Russian Jews. 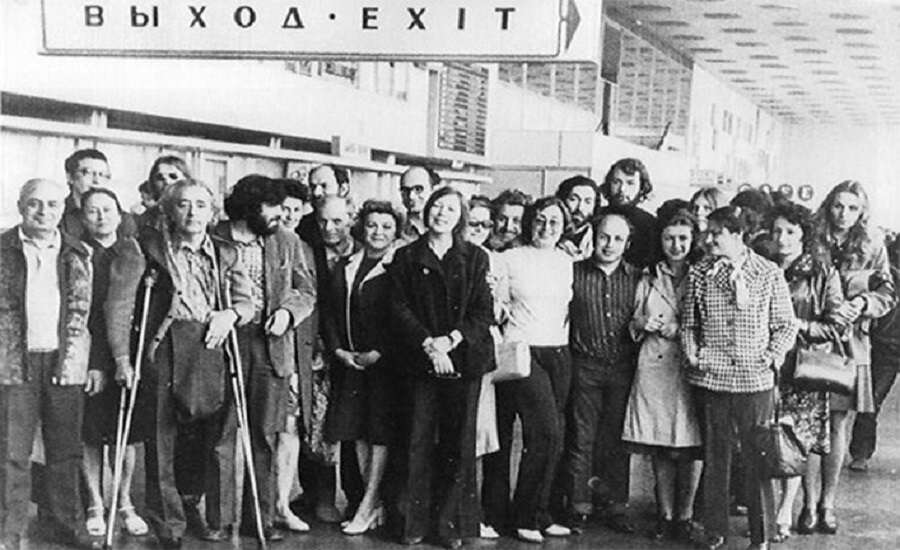 After the Bolsheviks came to power, the Pale was dissolved and the government banned discrimination on ethnic or social grounds. Nevertheless, popular antisemitism did not disappear overnight. Jews continued to be scapegoated by the Reds, Whites, Nationalists, and other factions during the Civil War, leading to over 30,000 documented deaths in pogroms. Although the government tried to set up Jewish settlements, particularly in Ukraine, the practice of Judaism was persecuted under anti-religious laws and Jewish cultural and educational institutions disappeared. In response to these chaotic years, large numbers of Russian Jews emigrated to Europe.

Tens of thousands of Jewish cultural and political figures were killed by Stalin during the Great Purge of 1936-1938, and Stalin further purged the Ministry of Foreign Affairs in anticipation of Soviet collaboration with Nazi Germany. In August 1939, the Molotov-Ribbentrop Pact was signed between Nazi Germany and Soviet Russia. Not only did this divide Poland – the country with the world’s largest Jewish population – between Germany and the USSR, but it was a non-aggression pact which prompted the silence of the Soviet government regarding Nazi policy towards Jews.

Before August 1939, over 3 million Jews lived in the Soviet Union, the majority in the areas of modern Ukraine and Belarus. After the annexation of Poland, the Jewish population of the USSR increased to 5,400,000 people. When Germany invaded the Soviet Union in July 1941, well over 1 million Soviet Jews were evacuated eastward and over 500,000 joined the Red Army. Between 1941-1945, it is estimated that at least 2 million Soviet Jews were killed by the Nazis.

The official Soviet narrative represented the Holocaust as an atrocity against Soviet citizens and did not emphasise the genocide of the Jews. It also ignored that non-Jewish residents of the western Soviet republics sometimes collaborated with the Nazis. Post-war publications which did not fit the official narrative were censored, such as the Black Book documenting Nazi atrocities against Jews, written by Soviet Jewish journalists Ilya Ehrenburg and Vasily Grossman.

State discrimination continued in the USSR following the death of Stalin, but the Soviet government began allowing Jewish emigration from March 1971 onwards. Over the next decade, approximately 250,000 people left. During the Gorbachev period there was a revival of Jewish culture and religious freedom, the Confederation of Soviet Jewish Organizations and Communities was founded (the first of its kind since 1917), as well as an independent centre monitoring antisemitism in the USSR and helping Jews to emigrate. Unfortunately, the new freedom of expression and press saw a rise in popular antisemitism, particularly perpetrated by the group Pamyat (memory).

History of the Jewish Museum and Tolerance Centre

The Jewish Museum and Tolerance Centre was conceived by the Federation of Jewish Communities of Russia, and by Alexander Boroda, Borukh Gorin and Berel Lazar, the chief rabbi of Russia. It was opened in 2012. The affiliated centres of the museum, including the Research, Educational, Children’s and Tolerance Centres, teach visitors about the history of the Russian Jewish population, and encourage tolerance and intercultural dialogue in modern society.

The museum is located in the Bakhmetevsky Bus Garage, an Avant-Garde monument built in 1927 by eminent architects Konstantin Melnikov and Vladimir Shukhov. The garage was given to the Jewish community of Moscow in 2001, and materials were collected for the museum over the course of a decade. The opening of the Soviet archives enriched the collection of the museum, as it revealed elements of Russian Jewish history which had previously been censored. Ralph Applebaum Associates, the company responsible for the United States Holocaust Memorial Museum, designed the Jewish Museum in Moscow.

Did you know? The bus garage initially housed the Garage Museum of Contemporary Art, opened in 2008. Garage was founded by Dasha Zhukhova and sponsored by Roman Abramovich, who chairs the board of trustees for the Federation of Jewish Communities of Russia. Today, Garage is located in Gorky Park.

What can you see at the Jewish Museum and Tolerance Centre? 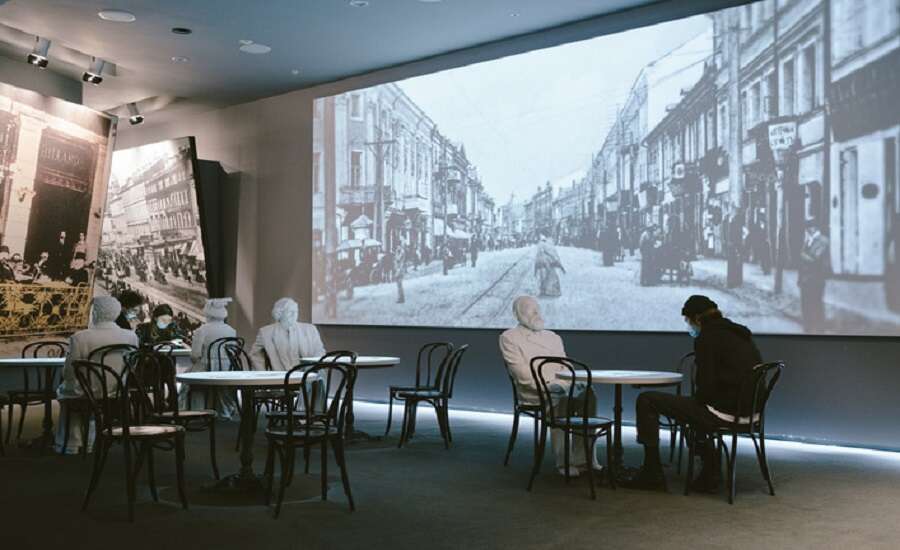 12 high-tech exhibition halls chronicle Jewish history in Russia from the reign of Catherine the Great up until the present day, telling the story of the Russian Jews through interactive media, cinema halls, installations, photo and video archives, and personal testimonies. The exposition explains the migration of the Jewish population and the origin of Russian Jewry, shows Jewish villages and communities in Russia over the centuries, deals with war, revolution, and the Holocaust, and explores the Jewish experience of the Soviet Union and the post-Soviet period. 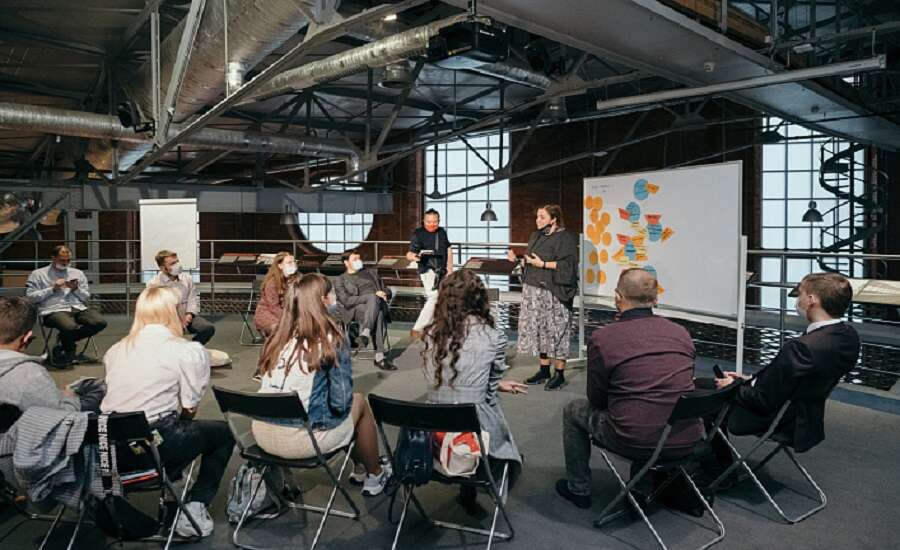 The mission of the Tolerance Centre is encouraging a positive dialogue between people of different cultures, religions, and worldviews. Many educational programmes and cultural events for all ages are organised there, which involve a Russian and international audience and create a space for peace and cooperation. 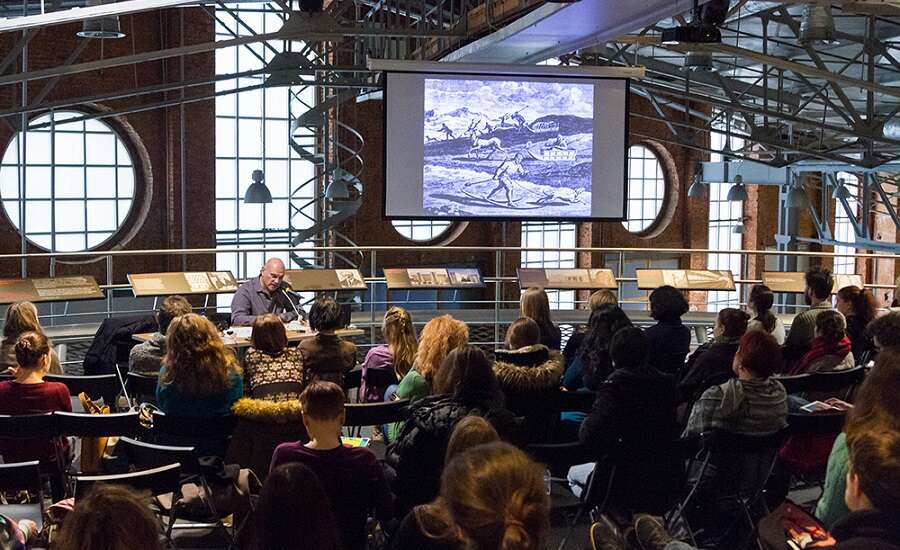 The activities of the Educational Centre focus on the spheres of social sciences, arts and humanities. Visitors can find courses, masterclasses, discussions, film screenings, festivals, concerts, and thematic lectures related to ongoing exhibitions. 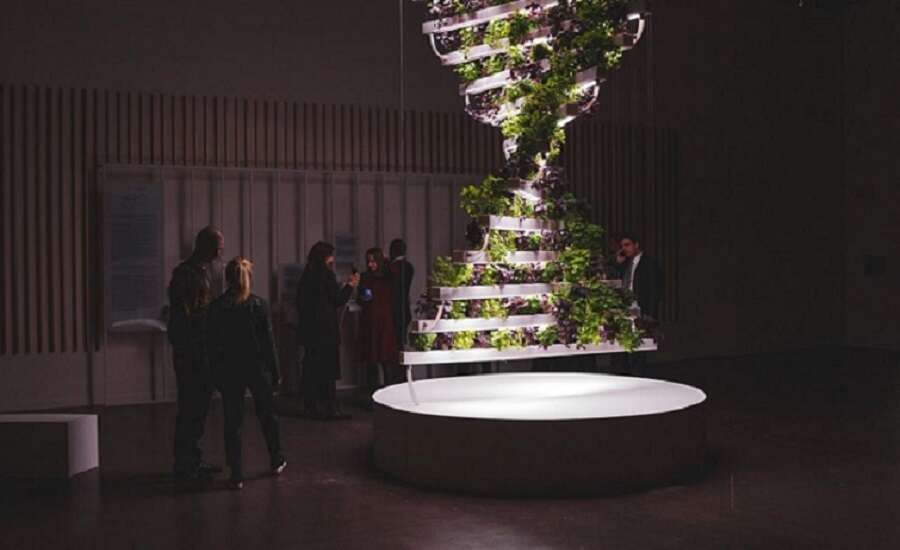 The Avant-Garde Centre is a place for research, educational projects, cultural events, and exhibitions related to the Russian Avant Garde, one of the most formative and innovative artistic movements of the early Soviet period. The centre was developed with the help of publishing project ‘Encyclopaedia of the Russian Avant-Garde’, and is also home to the Avant-Garde Library. 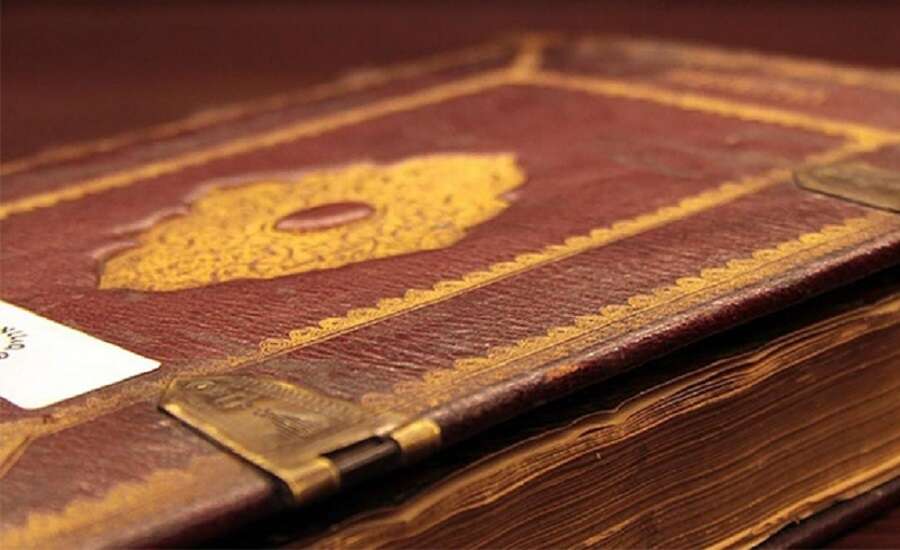 The Research Centre occupies a special niche in Russian-language Jewish Studies. It is dedicated to researching the history of Eastern European Jewry and updating the exhibition of the Jewish Museum. It also organises lecture programmes, research grants, film screenings, and internships. 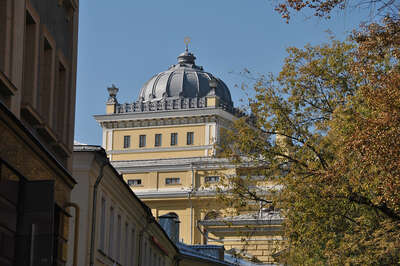 This Moscow tour extension includes visits to places connected with prominent representatives the Jewish community, meeting with community members, and also visit to the brand new Jewish Museum and Tolerance Centre, considered to be the largest Jewish museum in the world. 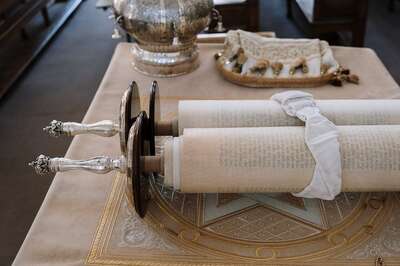 This tour offers a detailed look into the history and present-day life of the Jewish community of Moscow. On the tour, you will visit sites connected with the cultural and religious...