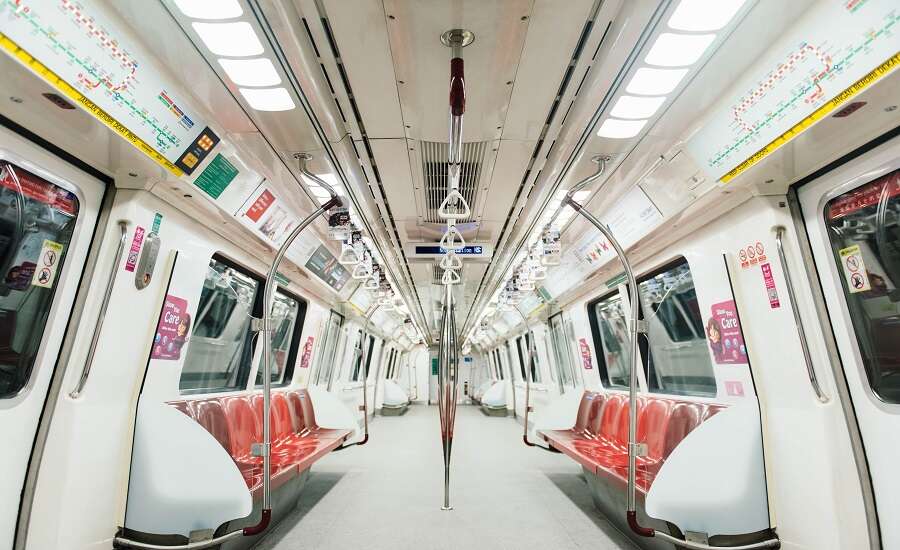 When visiting St. Petersburg, the quickest and easiest way to get around the city is certainly the metro, used by over 2.5 million passengers every day. The stations below are just like the streets above – beautifully and thoughtfully designed, a visual expression of Russian history. What’s the story behind the St Petersburg metro, and which are the stations you must visit?

What are important facts about St Petersburg metro?

History of the St Petersburg Metro 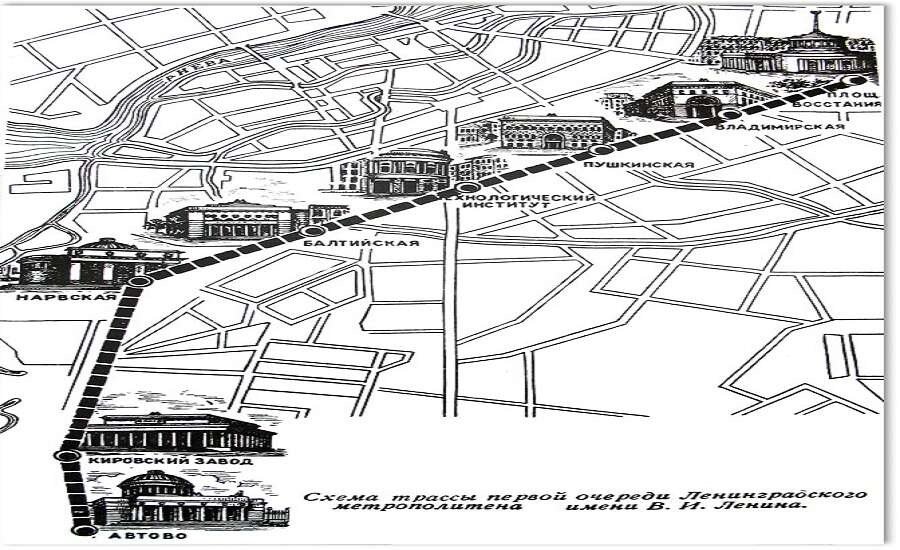 As early as 1820 the idea had been floated to dig a tunnel under the River Neva. But after the opening of Russia’s first railway in St Petersburg in 1837 and the founding of the world’s first metro, the London Underground, serious discussions began about constructing an underground railway service in Russia.

The first real proposition for building a metro in St Petersburg was presented by civil engineer Peter Ivanovich Balinsky in 1898. He intended to improve urban traffic with over 170km of train tracks running throughout the city, elevated between 5 and 10 metres above street level. Despite sourcing funding and materials from foreign connections, the Russian government rejected Balinsky’s plans and decided to go ahead with a tram system instead.

Did you know? The tram system actually played an important role in the determination of the metro routes. Passengers entering the tram were given a ticket from that particular stop, which they returned to the conductor upon alighting. By counting the number of tickets between different stops, the government were able to determine which routes were busiest.

The idea was not reconsidered until the construction of Moscow’s metro began in the mid 1930s, and in 1941 the project to design Leningrad’s metro began. Unfortunately, war broke out in Russia very soon afterwards and construction had to be abandoned. This had especially tragic consequences. In cities such as Moscow and London, the metro stations doubled as bomb shelters protecting thousands of people. This was not an option for Leningrad’s inhabitants during the Siege.

Did you know? The man in charge of the Leningrad metro before the war, Ivan Zubkov, was given the responsibility of building a railway over frozen Lake Ladoga during the Siege of Leningrad. This railway was known as the ‘Road of Life’.

Construction resumed after the war ended. The metro had to be built very deep under the earth, as the marshland on which St Petersburg lies is not very conducive to building secure underground tunnels. The first metro line was opened in 1955 and ran between Avtovo and Ploshchad Vosstaniya. The line was named the ‘Kirovsko-Vyborgskaya Liniya’ and given the red colour. The first seven stations on the line were constructed in imposing Stalinist Empire style, emblazoned with Soviet motifs proudly displaying the might of the workers and state. The metro was not just to be a method of transport, but a ‘Palace of the People’.

By the collapse of the USSR, four lines had been were constructed. The red line was followed by the Moskovsko-Petrogradskaya Liniya in 1961 (blue line), Nevsko-Vasileostrovskaya Liniya in 1967 (green line), and Pravoberezhnaya Liniya in 1985 (orange line). Whether the stations were big or small, central or suburban, a striking design was added to every single one.

Did you know? Although the metro was unable to provide shelter during the Second World War, stations constructed in later years were to double as bomb shelters during the Cold War, and contain blast doors and air filters. 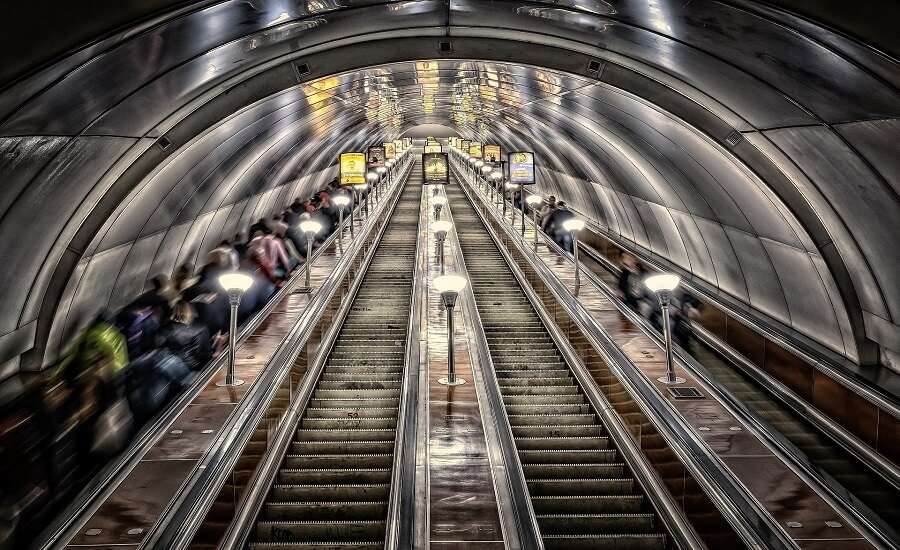 A number of new stations have opened in the past few years. This includes the Fruzensko-Primorskaya Liniya, which opened in 2008 (purple line); Novokrestovskaya, linking the centre with St Petersburg’s Krestovsky Stadium; and the city’s newest stations, Prospekt Slavy, Dunayskaya, and Shushuary, finished in 2019.

Did you know? Surprisingly, the busiest metro station in St Petersburg does not lie in the city centre, but the outskirts! Prospekt Veteranov serves an enormous area of the south-western suburbs.

The Soviet-era metro lines still retain their names today, but most people refer to them by the colour or number of the line. Currently there are 124 kilometres of track serving 72 stations, but more stations are yet to come. In the pipeline for the next few decades are extensions to the orange, purple, green and red lines (including a station at the airport and by the Mariinsky Theatre), a new grey and brown line, and a yellow circular line linking suburban stations around the city.

Did you know? There are nearly 2000 carriages servicing St Petersburg’s metro network! Women are still prohibited from working as metro drivers, as it is considered a hazardous job.

If you’re interested in the history of the St Petersburg Metro, pay a visit to the Metro Museum.

A trip to St Petersburg would not be complete without riding the metro to discover some of the incredible stations hidden deep under the ground. Taking photographs in the metro is no longer prohibited as long as you don’t use a flash, get in the way of foot traffic, or photograph metro staff. Where are the most fascinating stations? 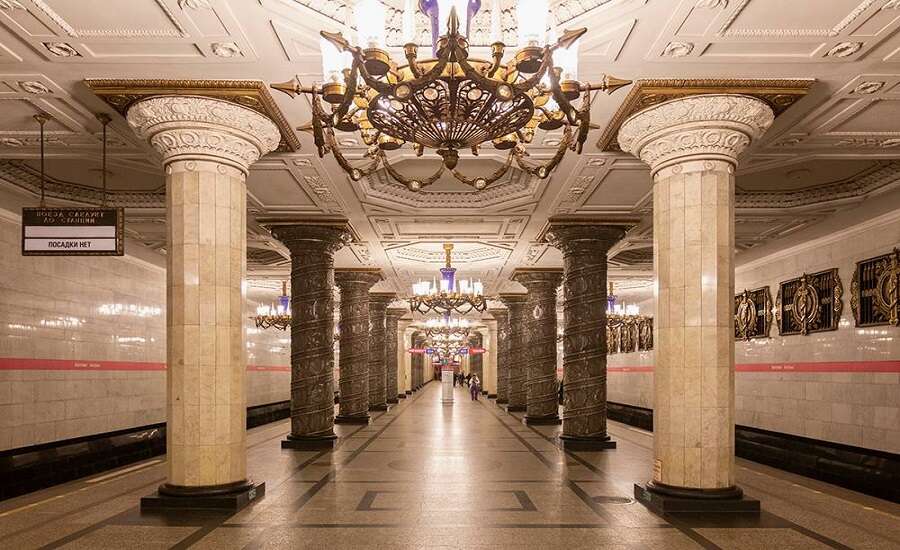 The first metro station constructed in St Petersburg and certainly one of the city’s most magnificent. 700 lamps illuminate a grand platform embellished with elaborate chandeliers, columns woven with marble and glass, wall panels decorated with metalwork Soviet motifs, and a mosaic glorifying the strength of Leningrad during the Second World War. 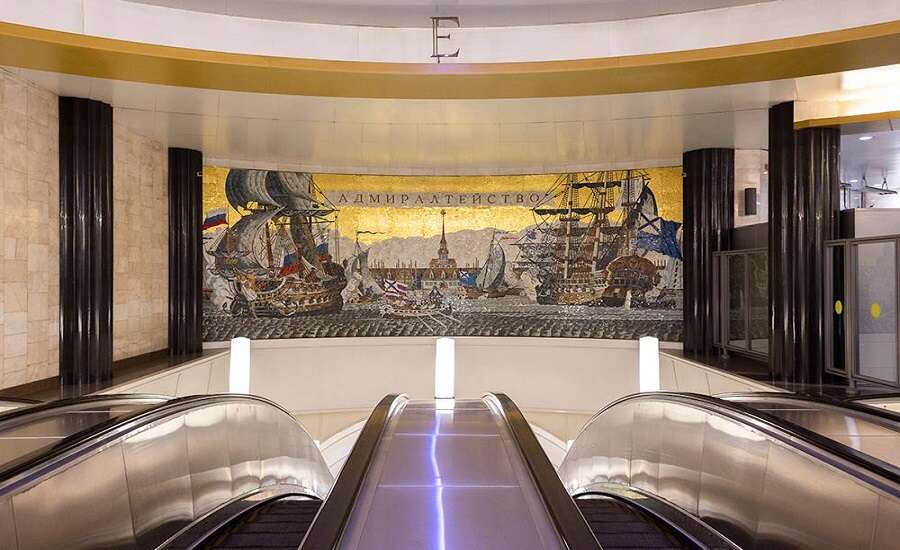 St Petersburg’s deepest station is home to elegant maritime decoration. The walls and floor are made from polished granite and blue stone giving the impression of a crystal pool, and bas-reliefs of naval commanders and admirals adorn the walls. Four large mosaics depict Peter the Great founding the Admiralty, the Admiralty standing proudly behind two warships, Neptune atop his raging white horses, and the River Neva with a huge ship, flag of the Russian Navy, cannons and anchor. 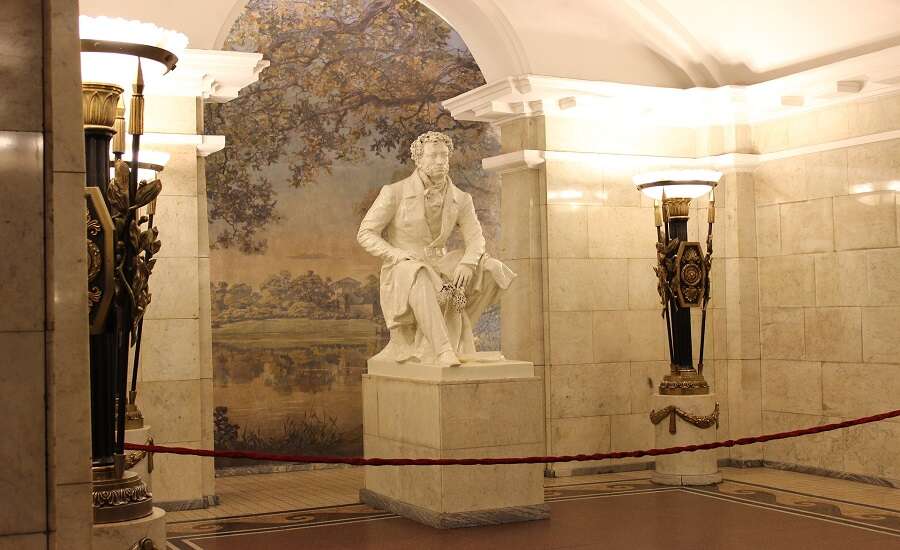 Dedicated to Russia’s most beloved poet Alexander Pushkin, this station is a work of art panelled with marble and decorated with natural motifs and ornate gilded lamps. The station is also home to a statue of the poet, standing before a painting of the beautiful town where he attended school, Tsarskoe Selo. (A second statue of Pushkin is located in metro station Chernaya Rechka). 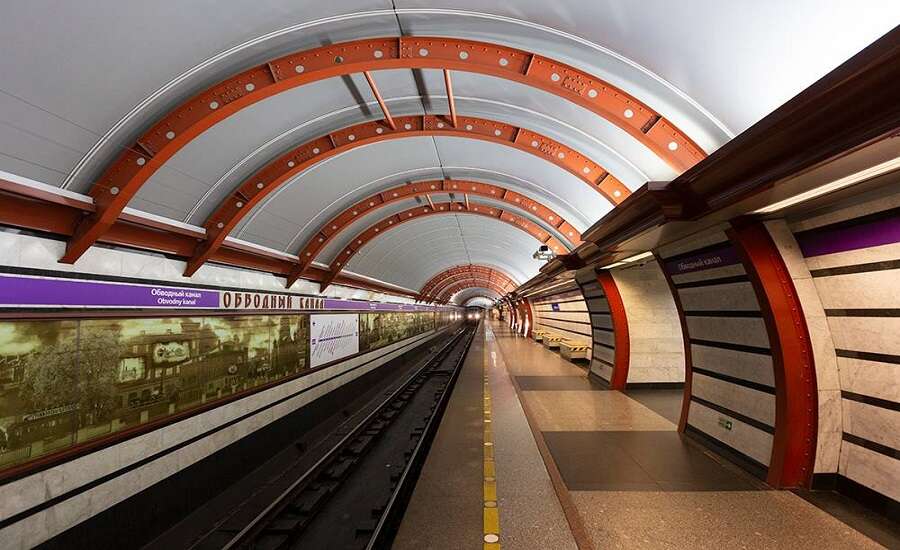 The industrial heritage of the surrounding area is reflected in the station’s design. The interior almost resembles a spacecraft, with glass and marble walls, streamlined red panels and soft lights framing a 300m long corridor. Contrasting this are pictures of Obvodny Canal in pre-revolutionary times which line the platform walls. 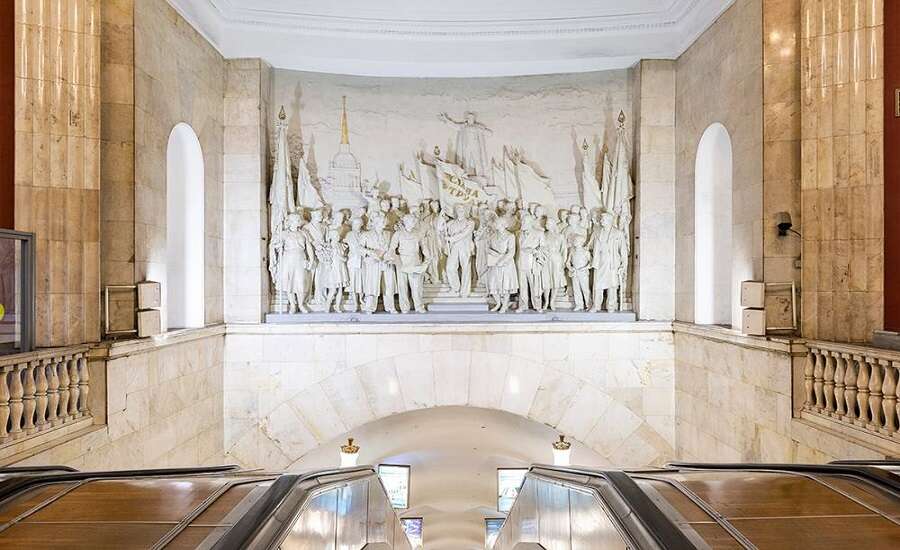 Another of St Petersburg’s first metro stations, Narvskaya celebrates the triumphant Soviet workers. 48 stone sculptures lining the platform hall depict honourable professions such as soldiers, collective farmers, doctors and students, and a marble relief above the escalators portrays a glorious workers’ parade through Leningrad. Make sure to check out the station’s grand pavilion and domed exterior which beautifully mirrors the triumphal arch across the road. 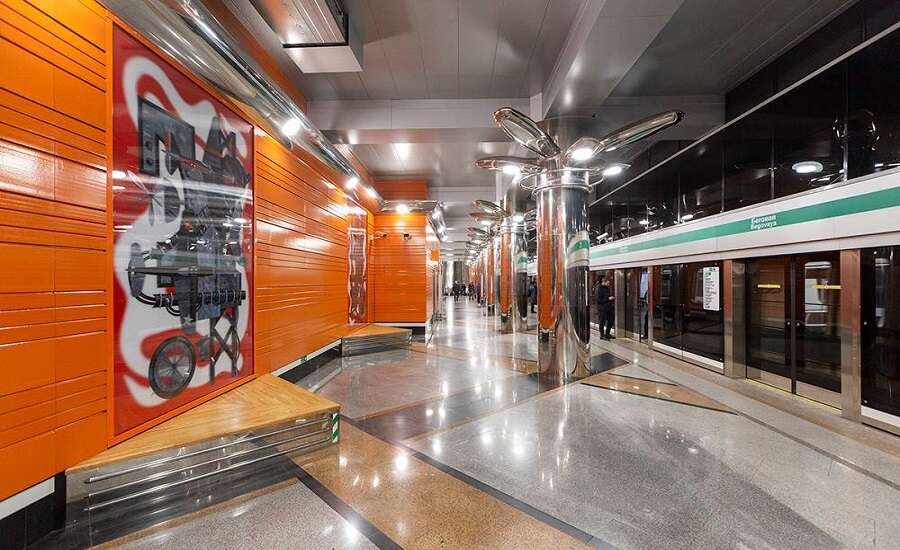 One of St Petersburg’s newest stations, Begovaya was built as an extension to the green line in 2018. Its futuristic industrial interior echoes architecture nearby, such as the Lakhta Centre and Krestovsky Stadium, and gleams with polished granite, stainless-steel columns, ceramic walls and decorative glass panels. There is a large piece dedicated to Alexander Savushkin, fighter pilot and hero of the Soviet Union, after whom the station was going to be named.

Ready to take a ride? Read our tips on how to use St. Petersburg metro.