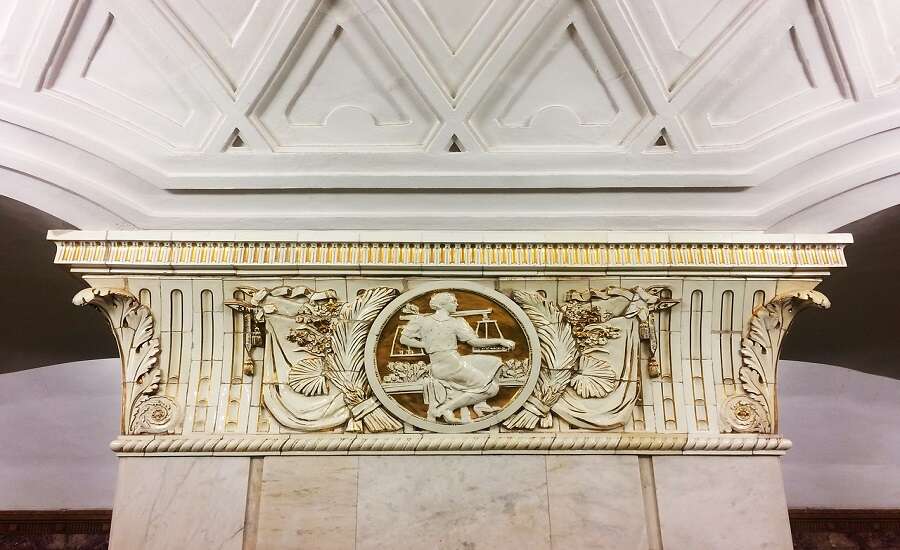 The first metro system built in Russia, the Moscow metro glorified the technological progress of the Soviet Union and is today one of the world’s busiest subway systems. It is most famous for its extravagant and unique interior design, exalted as the ‘Palace of the People’. Passengers on the metro not only travel around the city in comfort and ease, but travel back in time with the exquisite displays of Russian history located in its halls.

History of the Moscow Metro 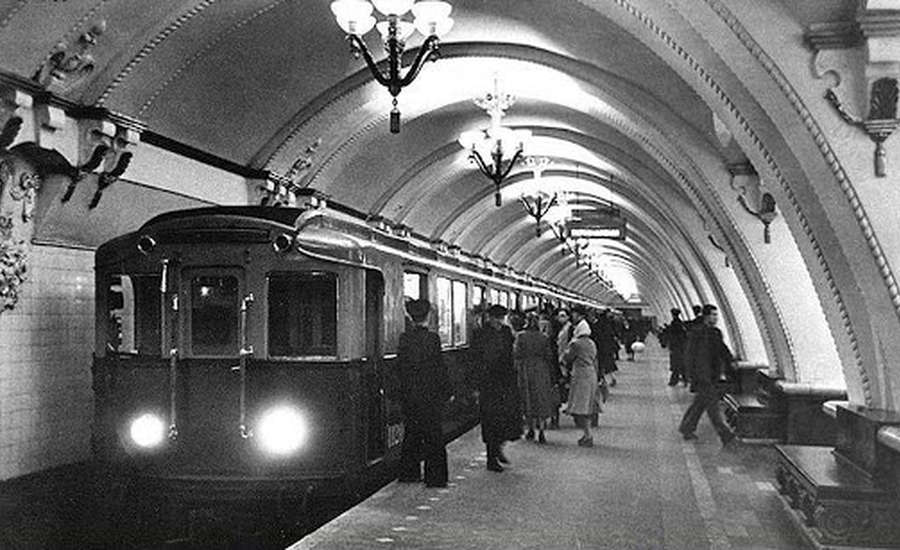 The first proposal for a metro system in Moscow was presented in 1872 by engineer Vasily Titov. Other plans were floated over the next half a century, but none came to fruition due to financial constraints, the disruption of war and revolution, and even opposition from the Orthodox church.

Things were to change with the rapid expansion of Moscow, designated the new capital city of the Soviet Union. As Lenin declared, ‘Communism is Soviet power plus the electrification of the whole country’ – and what better way to demonstrate this future-oriented mindset than building a brand-new metro system?

Construction began at the end of 1931, significantly aided by specialists from the London Underground. Unfortunately, this working relationship was soon ruined by the paranoia of the NKVD, concerned by the foreigners’ increasingly intimate knowledge of Moscow. This culminated in interrogations, show trials and an International crisis.

Did you know? Gants Hill Underground Station in east London was designed to honour this relationship between the USSR and England, its interior reminiscent of the grand columns and barrel-vaulted halls of Moscow’s metro stations.

Moscow’s first metro line was opened in May 1935, with 13 stations between Sokolniki and Park Kultury. This line was named the ‘Kirovsko-Frunzensky Diameter’ and given a red colour. Two more lines were added shortly after – the ‘Gorky-Zamoskvoretskaya Liniya’ (green line) and ‘Arbatsko-Pokrovskaya Liniya’ (blue line).

Did you know? To celebrate the opening of the Moscow metro, a choir of 2,200 metro workers put on a special performance at the Bolshoi Theatre, and 25,000 copies of a songbook entitled ‘Songs of the Joyous Metro Conquerors’ were published.

The magnificence and scale of stations built between 1935 and 1955 reveals that the metro held more importance than a mere transport system, earning it the fitting description ‘the Palace of the People’. Each station was commissioned as an individual project with its own theme and architect.

Did you know? 21 thousand square metres of marble were used just for the first 13 stations!

Luckily for the Muscovites, the metro provided ample shelter during the Second World War. As in London, thousands of people crowded into the stations to hide from the German bombing raids. Construction continued regardless, and in fact 7 new stations were opened during wartime.

Did you know? Since its opening, there has only been one day when the Moscow metro did not operate. This occurred on 16th October 1941. The government had prepared to destroy the metro system in the event of Moscow’s fall to the Nazis. As the Germans approached Moscow, the first stages of these plans were put into action on 15th October 1941 and the metro was closed the next day. Thankfully, the situation escalated no further.

After Stalin’s death, attitudes towards architecture changed and the palatial decoration of stations was replaced with a more functional style. However, this enabled the expansion of the metro at a fantastic rate, and by the late 1970s it was the busiest in the world. By the collapse of the Soviet Union, 9 lines had been opened.

Did you know? Stalin ordered a second deeper system of tunnels to be constructed, to connect government headquarters and secret bunkers. During the Cold War this was expanded to add several ‘lines’ connecting enormous shelters, storage spaces, command centres and military facilities capable of withstanding nuclear attack. This system was known as ‘Metro 2’. You can even take private tours of some of these bunkers! 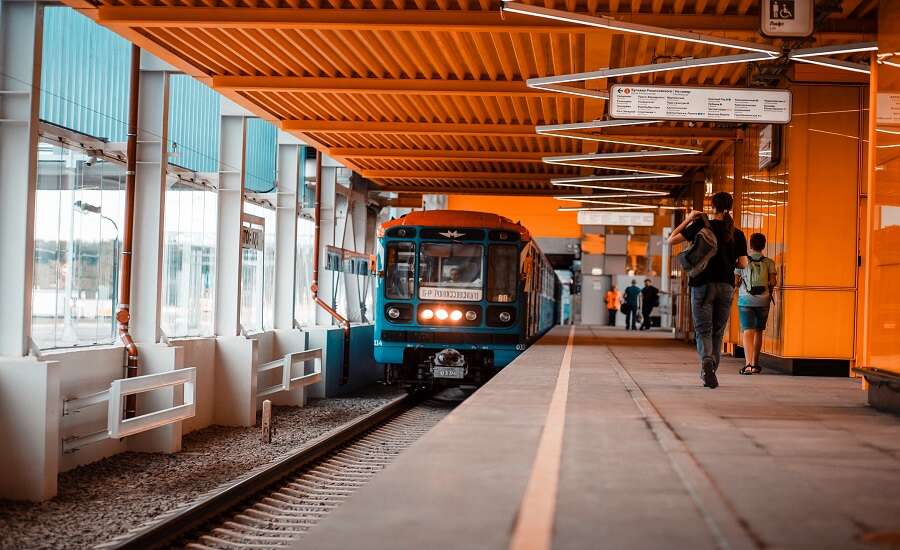 Photo by Max Titov on Unsplash

Today the Moscow metro is nearly 400 kilometres long, with 15 lines serving 269 stations. This includes a monorail and two circle lines connecting suburban stations at different distances from the centre. Expansion is ongoing at such a rate that various Soviet construction records have been beaten. In the last 10 years, the length of the metro has nearly doubled and 81 new stations have been added.

In the future there are plans to extend 7 of the lines, build 3 new lines, and integrate overground services. After this, the Moscow metro will cover 1000 kilometres! 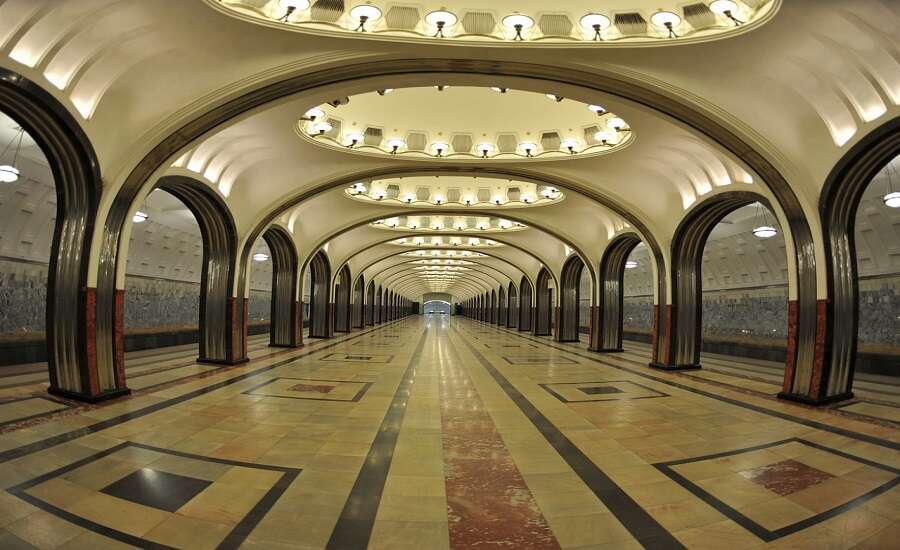 This station was opened in 1938, built in Stalinist Empire style with some remarkable Art Deco elements. Stainless steel panelled arches line the platform, and the geometric-patterned floor is made from different types of marble. 34 ceiling niches contain mosaics entitled ‘A day in the life of the Soviet Union’, many with an aviation theme, illuminated by circular lamps giving the impression of a chandelier. Mayakovskaya station was awarded the Grand Prix at the 1939 World Exhibition. 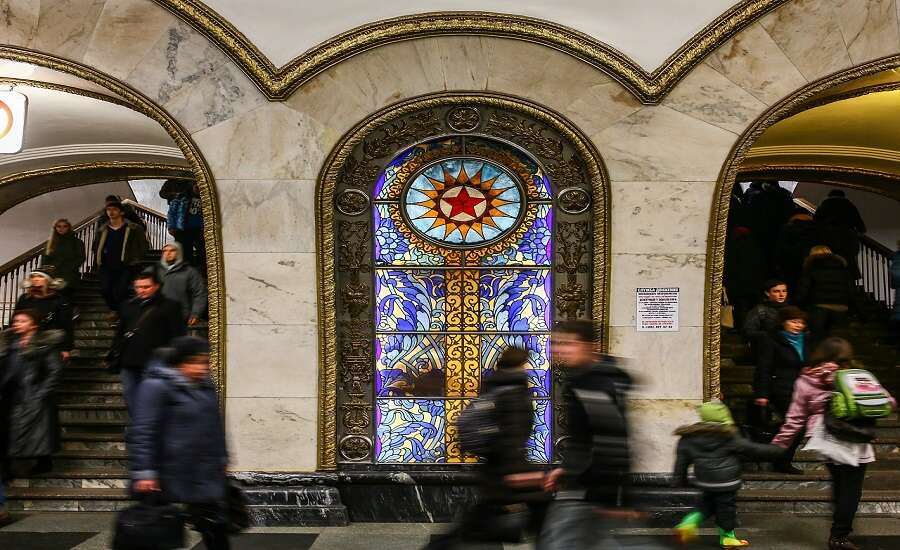 Known as the ‘stone flower’ of Moscow’s metro system, Novoslobodskaya is unique for its stained-glass panels sourced all the way from Riga. The panels are illuminated from within and fitted into smooth arches lining the platform. They merge geometric natural designs with Socialist Realist motifs such as idyllic village life and noble professions. The floor is made from chessboard-style granite slabs, and there is a large mosaic depicting ‘World Peace’ at the end of the platform. 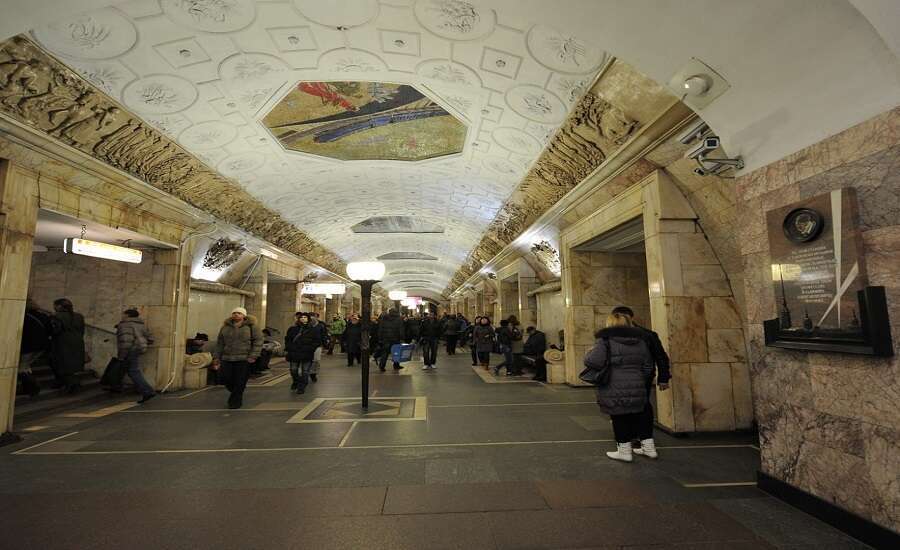 Built at the height of the Second World War, Novokuznetskaya glorifies the bravery and strength of the Soviets during wartime. It has the style of a Roman temple with carved marble benches and colourful marble floors. Military friezes stretch the entire length of the platform hall, panels glorifying the Hero Cities of the Soviet Union line the walls, and seven mosaics representing important Soviet professions adorn the ceilings. The mosaics’ creator, Vladimir Frolov, sent them to Moscow via the ‘Road of Life’ over frozen Lake Ladoga. He himself died in the Siege of Leningrad. 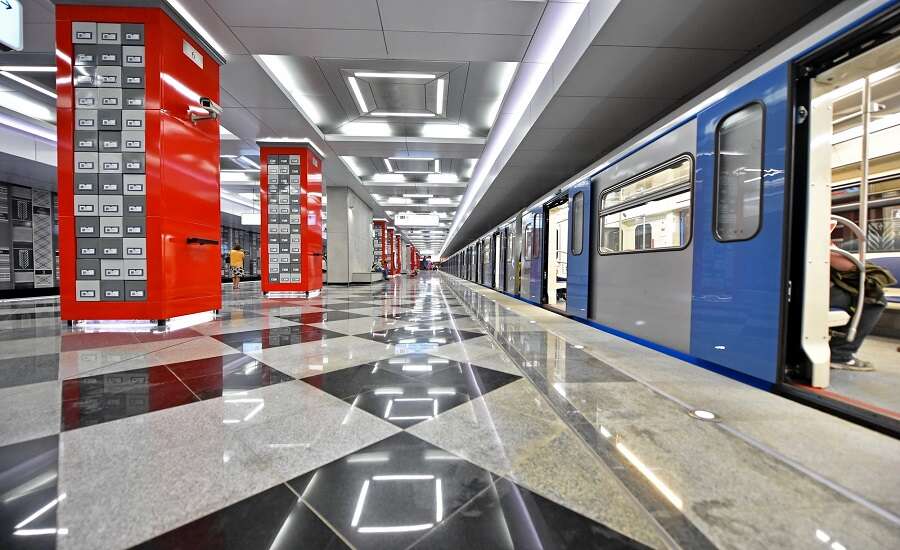 Rasskazovka (whose name means ‘storytelling’) celebrates Russia’s literary heritage. The platform walls are covered with the names of Russia’s most eminent writers and poets and the trackside walls are decorated as bookshelves displaying famous books. Like a library from the future, the platform columns look like filing cabinets - but each ‘drawer’ displays a QR code and author’s name, allowing passengers to download books for their journey! Though far from the city centre, it’s worth a journey to see this unique station. 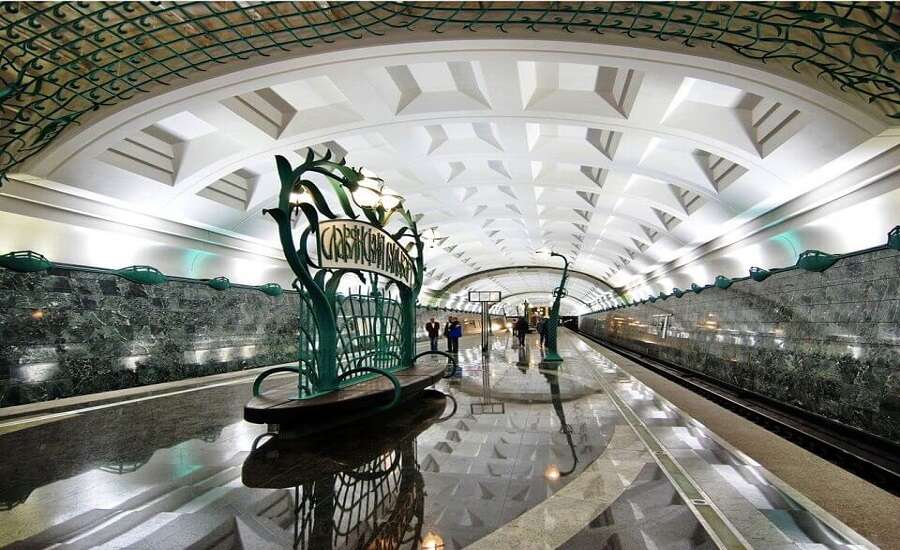 A taste of the Paris metro has arrived in Moscow in the form of Slavyansky Bulvar. Inside a curved glass vestibule is a platform is embellished with Art Nouveau elements – delicate curved lamps, leaves framing the station name, and tendrils stretching across the vaulted ceiling. 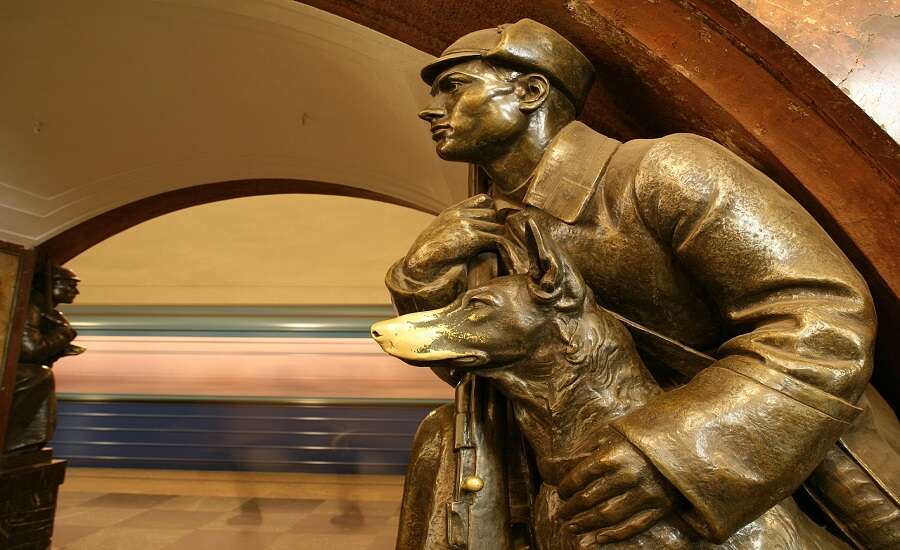 Imposing decoration fills the halls of Ploshchad Revolutsii, the nearest station to Red Square and the Kremlin. Dozens of Socialist Realist statues depicting Soviet men and women prop up the red marble arches stretching the full length of the platform, and a mosaic glorifying the 30th anniversary of the October Revolution stands proudly above the ticket office. 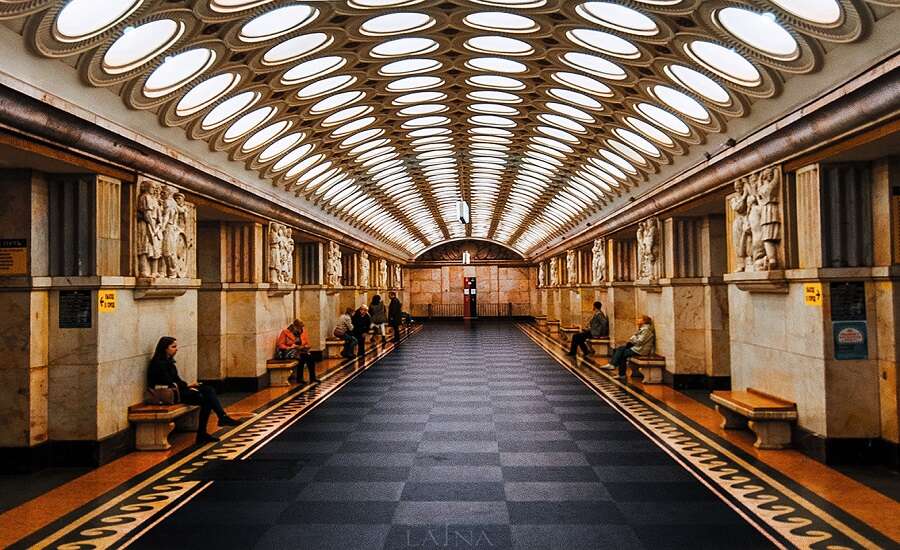 Named after a nearby electric plant, pioneering scientists of electrical engineering are celebrated in the ticket hall of the station, which is decorated with medallions of Michael Faraday, Mikhail Lomonosov, Aleksandr Popov and others. Bas-reliefs depicting celebrated professions line the platform hall, as well as 318 circular lights which appear almost as an optical illusion. Interestingly, fossils are visible in the red Georgian granite of platform walls. 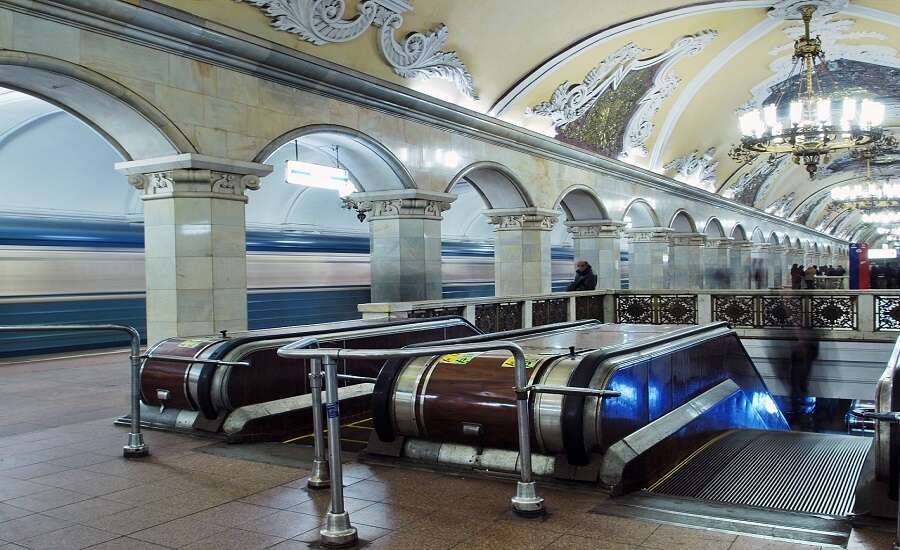 One of Moscow’s oldest and most palatial stations, Komsomolskaya is a magnificent example of Stalinist Empire architecture. It was conceived as a gateway to the capital city, receiving visitors first arriving into Moscow from the nearby intercity stations. Alongside marble columns and chandeliers are mosaics celebrating the most influential figures in Russian history including Alexander Nevsky, Minin and Pozharsky, Mikhail Kutuzov, and Lenin.

To see the best that the Moscow metro has to offer, why not take one of Express to Russia’s Moscow Metro Tours? And for a helpful walkthrough of how to use it, check out our guide. 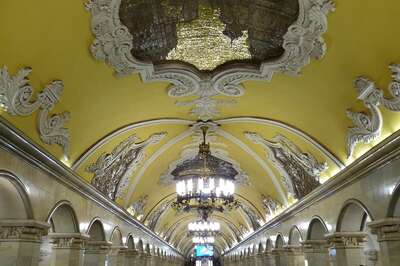 The Moscow Metro is one of the largest and most grandly built metro systems in the world. It was meant to be a showcase of the Soviet Union’s achievements for both the Russians...