How to use the Moscow Metro 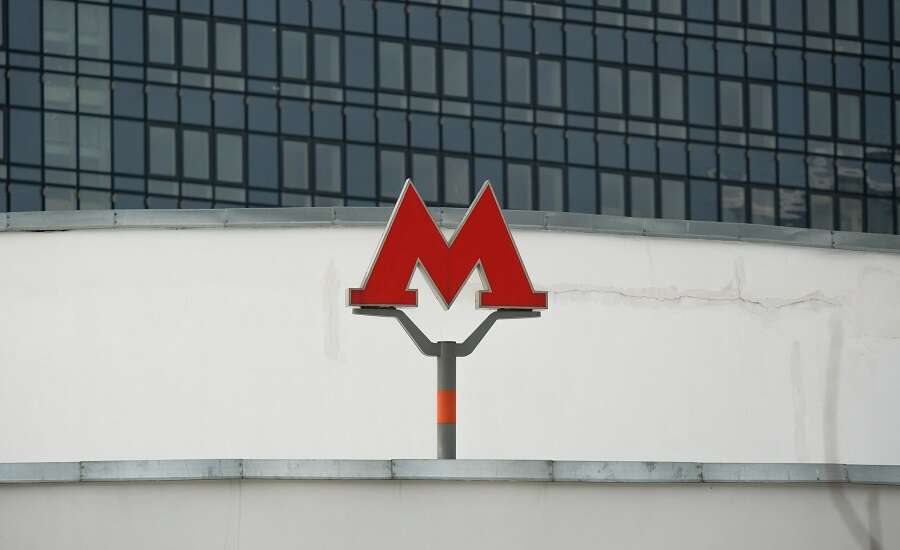 How do I use the Moscow metro?

Not only is Moscow too large to be walking around on foot all the time, it also has some of the world’s most beautiful metro stations. If not out of convenience or necessity, you should just check out the Moscow metro for its splendor.

Russia is not usually known for its punctuality or let alone its efficiency, but for some reason the metro defies all these stereotypes. Not only is it reliable, it also every five minutes or even more frequently, every day. Stunning. Not once have I been stuck in a tunnel for more than a minute, and not once has my train been canceled for no reason. Take that, Berlin or New York!
In Moscow, the opening times for the metro are approximately between 5.30 am and 1.00 am. The exact times vary from station to station. 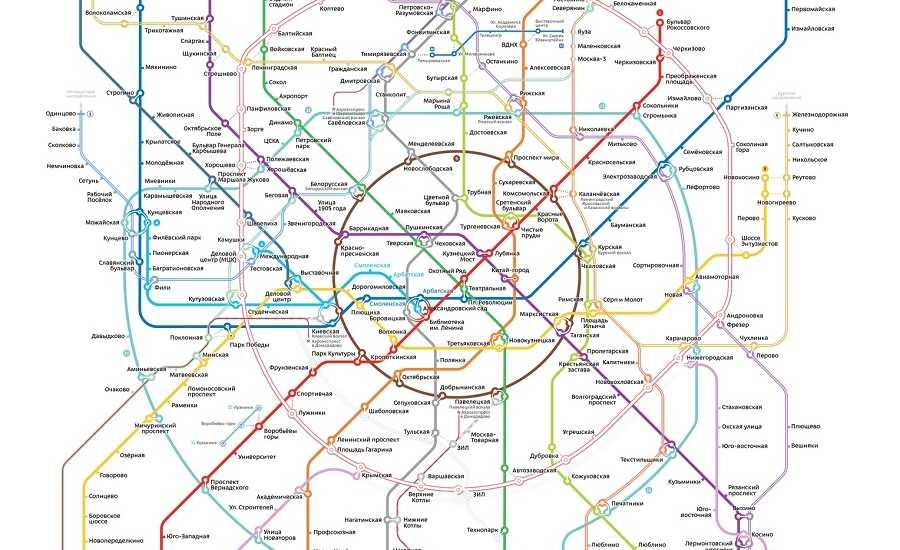 The Metro scheme looks confusing at first, but it is actually quite simple to use. As of 2019, you have two rings that interconnect all of the different lines. This means wherever you go, you probably don’t have to change more than twice. Convenient, right? If you’re a tourist traveling to Moscow, 90% of what you’re interested in is probably taking place inside the first ring. So, if you’re looking for a certain station, that’s where you should search for it first. Metro lines are referred to by numbers and color. Signs inside the metro usually have English translations, and the station names are transliterated. 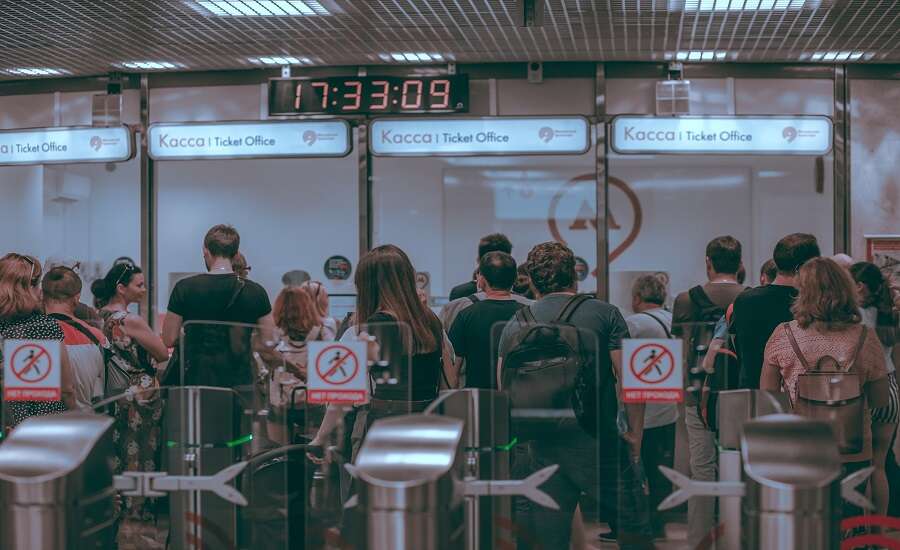 First, you need to pay for your ride. You can do so by going to the counter and asking the attendant for a ticket. Unfortunately, this only works in Russian. If you don’t speak the language, or if you’re just shy, you can use the machines. The ticket machine interface is translated into multiple languages including English and German. Real Russians tend to ignore the electronics, so in 9 out of 10 cases there is at least one free machine. On the other hand, lines in front of the counters can be quite long, and there seem to be no laws for queueing in this country.

You have several options for your ticket. You can buy a single or double ticket for ₽55 ($0.90) or ₽110 ($1.80) respectively. The other possibility is to buy a Тройка (Troika) card that you can top up with the amount of money you think you’re going to spend on transport. The card has a deposit of ₽50 ($0.80) that will be refunded once you turn in your card. At only ₽35 ($0.55), rides completed with the Troika card are cheaper than normal tickets. They also have day passes and the like, however you can’t purchase these from the machines.

The metro is cheap, but keep in mind that in Russia one ticket doesn’t mean one way. That is, if you have to change from the metro to a bus, you have to pay once more. Again, you can save here with the Troika card, because if you change from the metro to surface transit within 90 minutes, the entire journey will cost you only ₽54 ($0.89). This being said, make sure you know in advance exactly what kind of transportation you need.

Pro-tip: Visting Moscow and St. Petersburg together? There’s a new integrated metro card which lets you use transport in both cities. Its name is Troika + Podorozhnik and you can buy it at all metro stations. 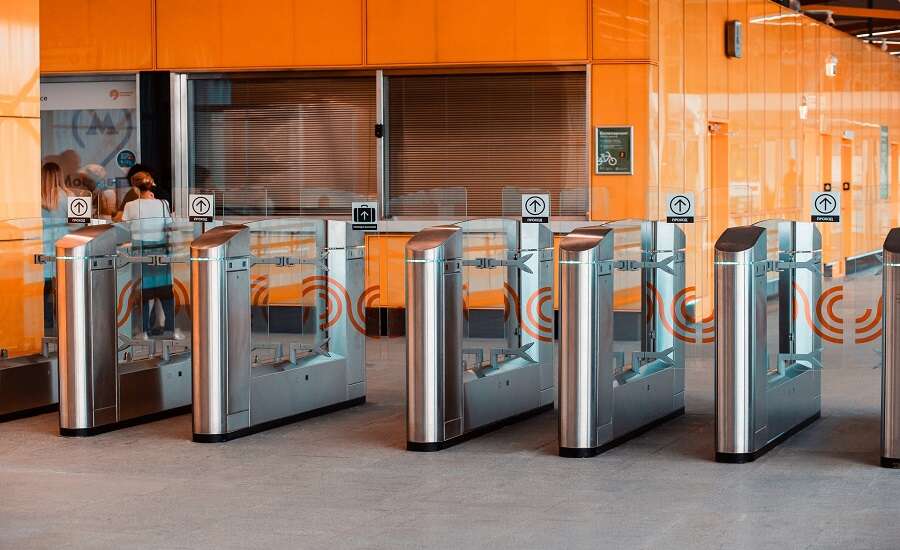 Feed your ticket into the turnstile, wait for the glass doors to open and then enter. If you’re at a station that connects several lines, find the correct escalator. Go down. Check the direction in which you want to go. Is your stop on the way to the indicated terminus? If yes, you’re on the right platform. Wait for your train. If no, and you’re not sure if you’re on the right line, check the other direction.

When exiting, don’t be surprised if you have to pass through another turnstile again after you’ve reached the end of the escalator. They won’t ask for your ticket, just squeeze through.

The metro in Moscow works amazingly well and you won’t have too much trouble with it. Buying a ticket is probably the trickiest part, because you have to determine exactly what kind of ticket you need and what’s the best way to get it. Personally, I prefer the Troika card because I can just top it up and stop worrying about it. How many rides do I have left? Which day is it? Not my problem. In addition to getting you where you want, taking the metro also provides you with a daily dose of art and glamor. A truly valuable experience!

Photo by Semen Borisov on Unsplash

Photo by Max Titov on Unsplash

How to Use the St. Petersburg Metro

What to See and Where to Begin?