The Best Theatres in Moscow to See the Nutcracker 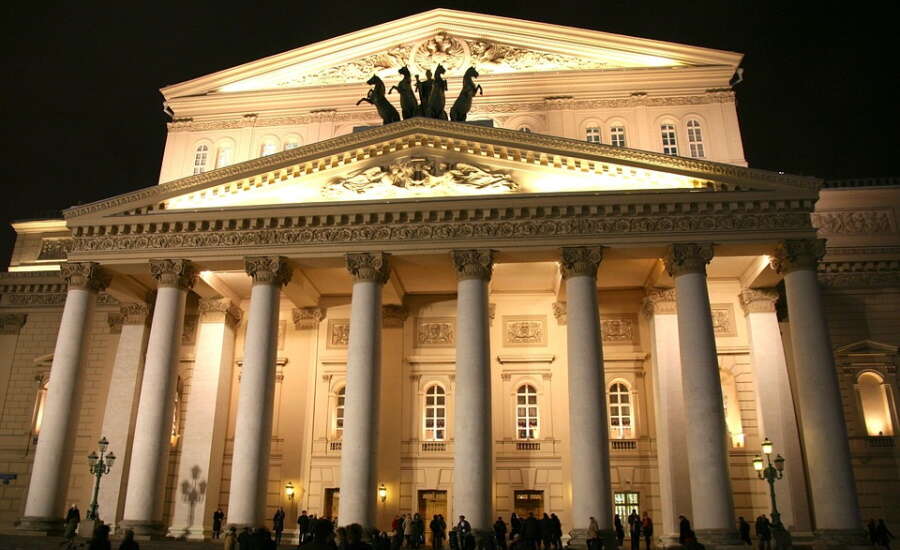 Photo by Ciroja on pixabay.com

Which are the best theatres in Moscow to see The Nutcracker?

As with any other attraction, Russian theatres have their high and low seasons. The busiest time of the year is naturally in the coldest season: when the plush interiors of Russia’s gilded-age theatres offer a welcome respite from the snow and gloom. There are innumerable performances to look forward to in Russia’s capital, but each winter one particular performance is so eagerly awaited for that tickets often sell out months in advance. That performance is none other than the enchanting tale of The Nutcracker: a Christmas gift to a sweet girl named Masha, who falls in love with the handsome toy solider. While her family sleeps, she joins the Nutcracker in a fantasy world where Christmas trees are so high that they seem to touch the sky and dog-sized rats stampede through houses like raging armies. It is in short, the magic of Christmas captured in a ballet.
Below are the best theatres to see this heart-warming, family-friendly ballet in Moscow this 2019-2020 season. 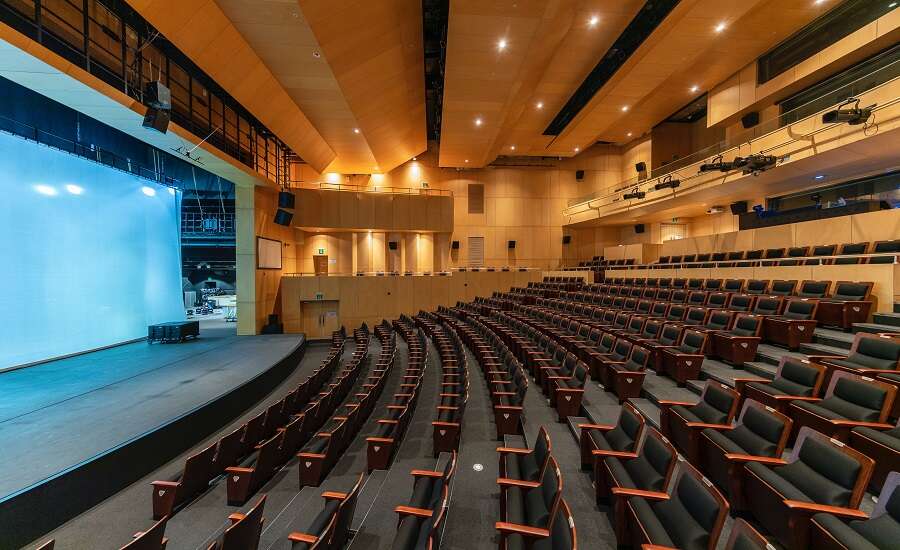 Photo by ASIA CULTURECENTER on Unsplash

As the name suggests, this theatre is located inside the heavily-guarded compounds of the Kremlin and, as with everything else contained within those Red Walls, it is full of surprises. For those unprepared, the first sighting of its glass paneled front-- starkly contrasting with the 13th century, limestone churches and palatial governmental buildings around-- may come as a shock.
The theatre is one of the newest additions to the Kremlin complex, having been built in the 1960s. Owing to the fact that it was built for the Bolsheviks, it is completely different from Russia’s famous, bourgeoisie-era theatres. Not an ounce of gold or single, unnecessary flourish can be found within the theatre’s huge hall. Like all soviet buildings, there’s an overwhelming feeling of impersonality and a lack of warmth. Surprisingly, there were benefits to the soviet’s calculating utilitarianism. Without the aesthetics to worry about, the architects could pour all their energy into designing a theatre with perfect acoustics and undisrupted views. The result of that, along with a massive renovation in 2013, is that the Kremlin Ballet’s theatre is considered the best purpose-built ballet theatre in the world.

Pro tip: Tickets here are cheaper than at the Bolshoi, even though the shows are equally outstanding. 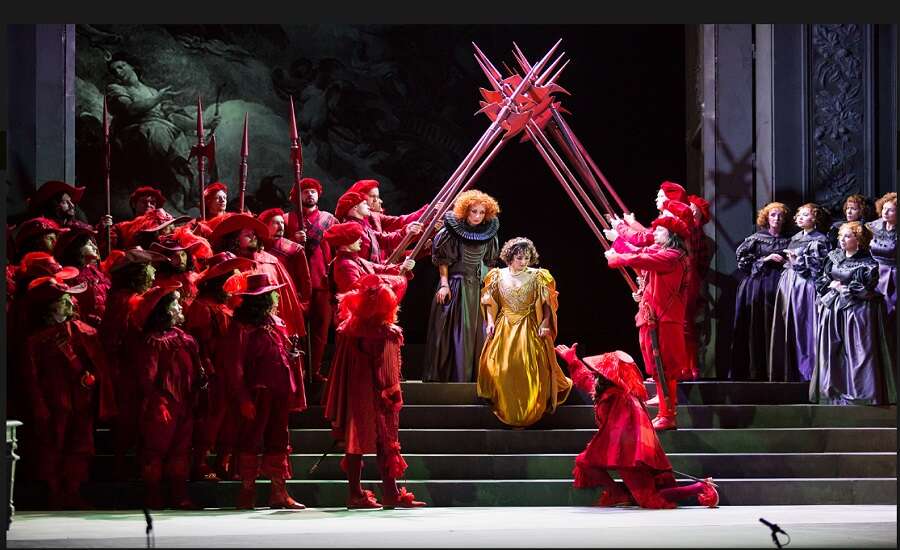 In Russian ‘Novaya’ means new. Built in 1997 this theater is indeed relatively new, but its name has more to do with its guiding philosophy than its age. In the words of its artistic director, “Scripts and scores are simply springboards for the imagination.” Though its rich, baroque-style interiors with countless winding staircases and chandeliers may suggest otherwise, performances at this theatre never stick to tradition. Naturally the theatre’s specialty is opera, but once in a while it runs ballet performances including The Nutcracker.

Pro tip: Surrounding the theatre are the Hermitage gardens which often host outdoor concerts, even in winter. 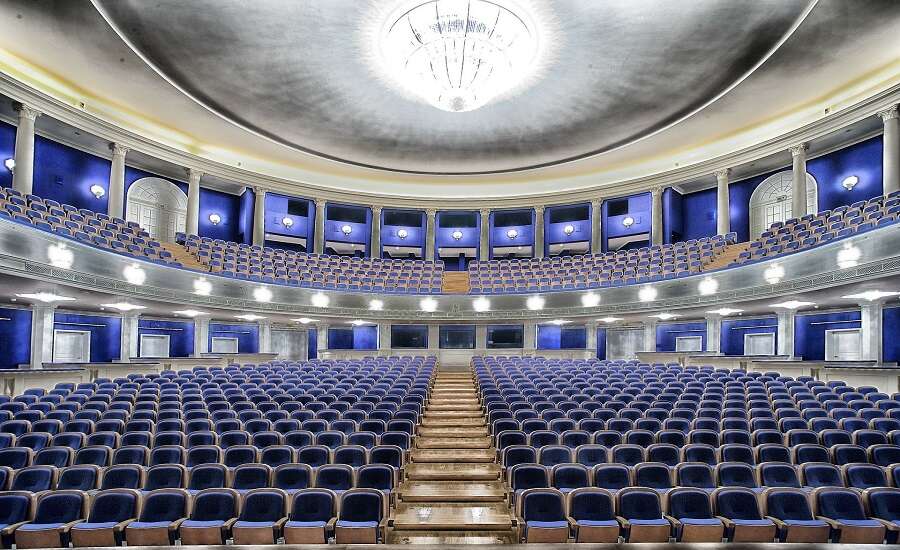 Photo by David Mark on Pixabay

Hit by no less than four disastrous fires, bombed by the Nazis and almost demolished by Lenin, it is a wonder that The Bolshoi Theatre has survived the 200+ years of its tumultuous history. Having been owned by fiery Italians and tight-rope walking, British mathematicians, the Bolshoi theatre is undoubtedly one of Russia’s most eccentric theatres as well as the most famous one. There are over 40 crystal chandeliers in its rich red and gold foyers. The crowning jewel of this theatre is no doubt the 2-ton giant that dangles above the audience, stretching 65m in diameter and almost 10m in height! If you are having a vacation in Moscow, do not forget to pay a visit, the tickets better be booked in advance.
After the last fire in 1853, the Italian architect Cavos had the genius idea of redesigning the theatre on the basis of a musical instrument; every last detail, down to papier-mache adornments, was carefully chosen so as to enhance acoustics. But even the principal theater of Russia is not immune to economic crises and, after the fall of the Soviet Union, it was at risk of falling into utter disrepair.
Thankfully, a six year renovation ending in 2011 brought the theatre back to its former glory. Though undoubtedly it is the Marinskiiy in St Petersburg that stages the best Nutcracker performance, the Bolshoi theatre isn’t far off.

Pro tip: Book a box seat for a truly royal night out. In case tickets are not svailable on official theatre website they may still be available through agencies. 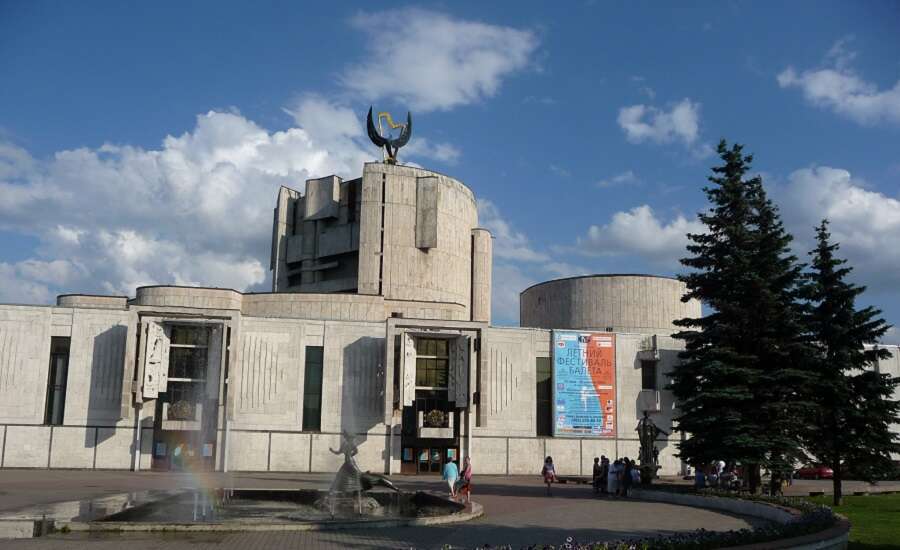 Photo by El Pantera on Wikimedia

The Nutcracker is at its core a family ballet and, in keeping with the Russian tradition of taking children to the theatre, all the theatres mentioned above will stage such enthralling shows so as to quiet even the rowdiest of toddlers. However, should you fear that your child won’t be able to sit through the two hours without making a show of their own, then the world’s first purpose-built Children’s theatre is the place to go. Set up in 1965 by the daughter of a famous opera singer, Natalya’s aim was to make theatre accessible to the smallest of people. Though the uninspiring, concrete exteriors might scream of dreariness, the performances staged inside its comfortable theatre are as flamboyant and lively as a Brazilian carnival.
Within the brightly painted interiors, one can even find aviaries and an aquarium!

Pro tip: Though this theatre may not look like much from the outside, its unique performances means that tickets can be as highly sought after as those of the Bolshoi’s. Book in advance, especially if planning to see The Nutcracker.

Coming to Moscow for the New Year? Learn about the best Christmas markets and other winter activities in Moscow.

The Best Theatres in St Petersburg to See the Nutcracker