Ways to unleash your inner hipster at Sevkabel Port: 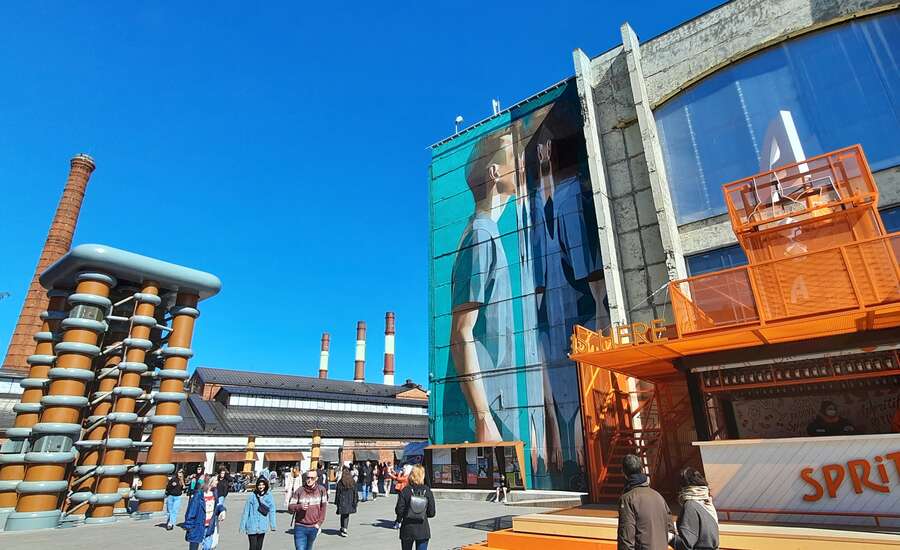 Only in St Petersburg would you find a heavy industry factory diversifying out into culture and creativity. In other places, the dynamics between gruff builders and melodramatic artists would be impossible. The hipsters have to wait till the factories shut down before they can whitewash the sooty-walls and shake the cavernous warehouses till dawn with newage techno. But in the city of Pushkin and Gogol, where street cleaners quote lines of poetry, industrialists not only appreciate art but embrace it.

Since 2018, when Sevkabel Port (a ship cable manufacturer) invited artists onto its premises, the number of creative residents has gone through the ceiling— literally. With boutique eateries and bespoke tailors filling up every nook and cranny of the stunningly restored waterfront warehouses, bands, art galleries and even a yoga studio have been forced to get close and intimate with the belly of the factory. In attics above workshops, drummers banging out their hearts are accompanied by the beats of hammers on steel below. It may sound wacky, but somehow the down-to-earthiness of a working factory coupled with uber-cool microbusinesses and a dash of fresh sea air meld together perfectly. The energy is infectious. 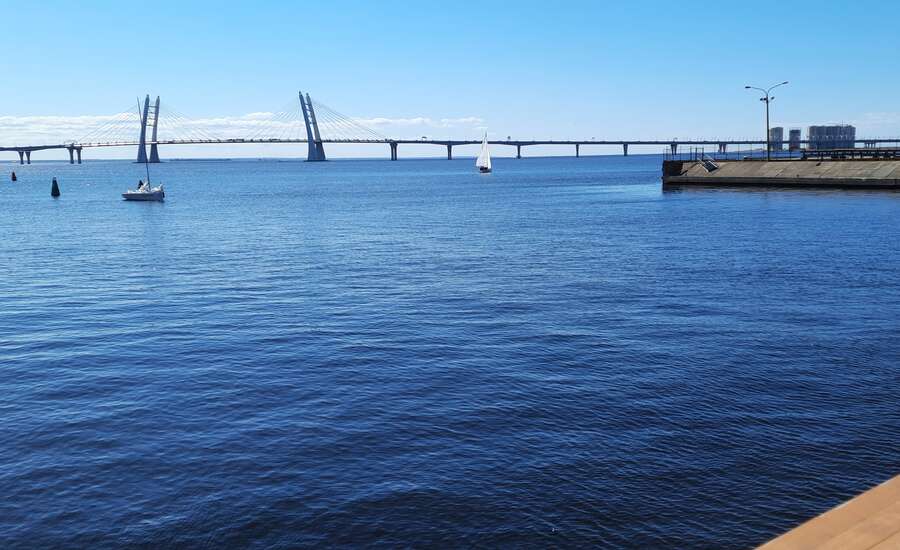 What was to be the world-famous Siemens electrical corporation started as a handful of electrical manufactory plants in Europe ran by the ingenious Siemens brothers. One such brother, Carl Heinrich von Siemens took his enterprising spirit to St Petersburg during the rule of Alexander II. The electrification of Nevsky prospect and the Hermitage in the mid-19th century was all thanks to Carl.

The opening of the Siemens’s plant paved the way to Russia’s modernization. Almost immediately after lighting cables, the cutting-edge workshops on the western tip of Vasilyevsky Island began producing telegraph cables and, later on, even the city’s now ubiquitous tram lines.

With the revolution, the Siemens’s plant became the people’s Sevkabel Port. But the changes were in name alone. The factory remained Russia’s principal cable producer. Even during the Leningrad blockade, this powerhouse kept the city alight by producing enough underwater cable to run through the length of Lake Ladoga, the largest lake in Europe!

As Russia’s oldest cable manufacturer, it is little wonder that when talks of modernization began in 2016, the whole community of Vasilyevsky island was eager to get involved. Thankfully, Sevkabel’s owners were won over by a local campaign. Rather than develop run of the mill office blocks, they were going to create a “space with meaning”.

Did you know? Sevkabel port produced almost 50,000 km of high-voltage wire in 2019, some of which was made-to-order for high-tech nuclear testing facilities in Europe. 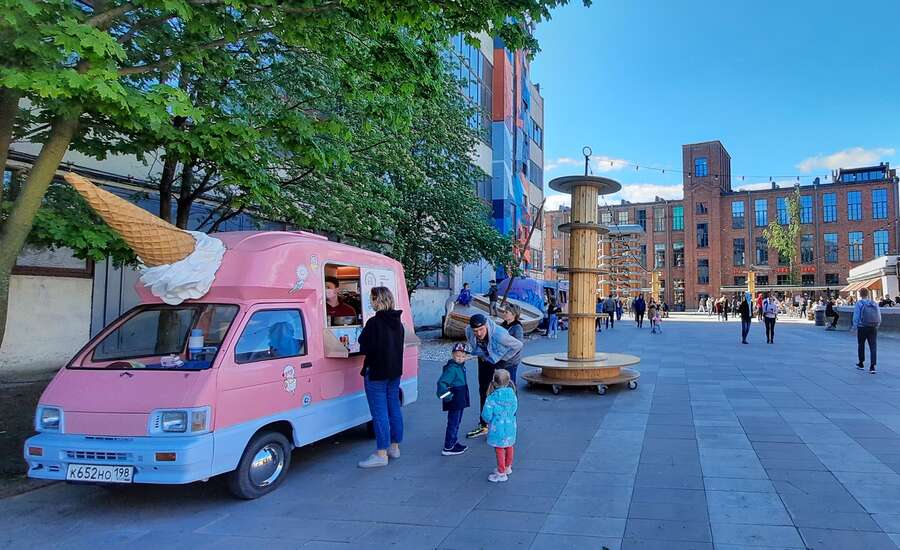 Russia was electrified by Sevkabel. Two hundred years on, Sevkabel lights up the night in another sense. Millennials flock here for the hottest concerts held in the mega store-house on an almost weekly basis. On the rare occasion when there isn’t an organized event, the handful of resident clubs keep the buzz going into the wee hours with live DJ sessions.

Daytime sees petersburgers of all walks of life come to un-wind and enjoy Sevkabel’s summery seaside vibes. When the pastel-pink ice cream vans come rolling in for one of Sevkabel’s numerous summer music festivals, it truly does feel like the mini L.A. of Russia. But even in winter, the space is kept cheery by the explosion of colorful graffiti on the factory’s gigantic chimneys and the promenade encircling the factory is just as magical with strings of fairy lights and an ice rink as it is with sun loungers and table tennis.

Did you know? Boats set off from the Hermitage to Sevkabel on a daily basis during summer (schedule can be found here: https://neva.travel/ru).

The Perfect Day Out

What to do at Sevkabel Port? 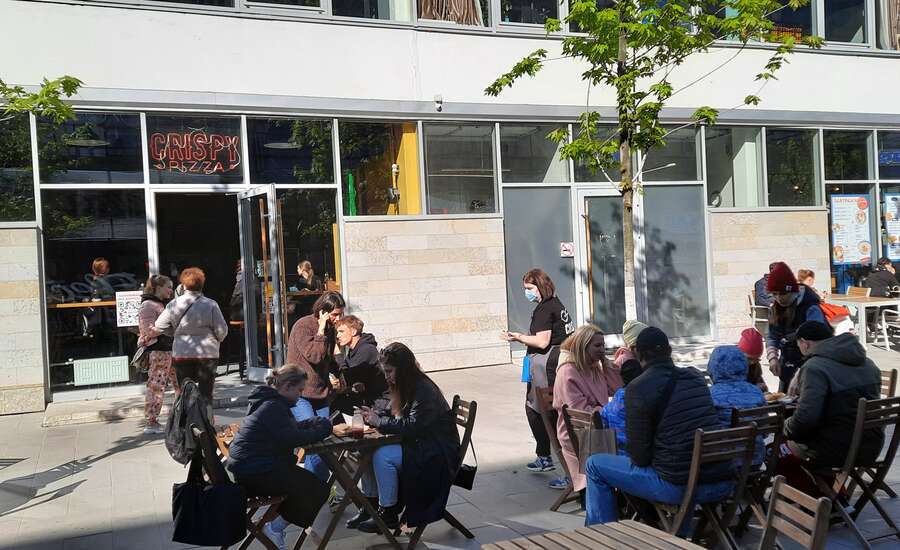 Grün: Plant-power all the way! Rated one of the prettiest restaurants in town, the greenery on the walls of this boutique restaurant is just as impressive as that on the plates. Relish flavors foraged from forests and meadows in the lush surroundings of a rainforest.

Plov One Lov: The name says it all. Rib-sticking rice spiced up with cumin and coriander and fried with onions to golden perfectionit’s the ultimate Russian or Uzbek comfort food.

Easy Hummus: Connect with St Petersburg’s Jewish heritage via the medium of good food and company at the city’s bestloved falafel kitchen.

Kambuz: You can practically see your dinner being hauled into the ports while standing at the retro bar of this small seafood restaurant.

Crispy pizza: As light and airy as a cloud, yet with a killer crispy bottom it’s no wonder pinsa (the ancient roman flatbread) has begun to replace its close but not quite as crispy cousin, pizza. Made with a specialist blend of flours and fermented for 72 hours, food doesn’t get more hipster than this. 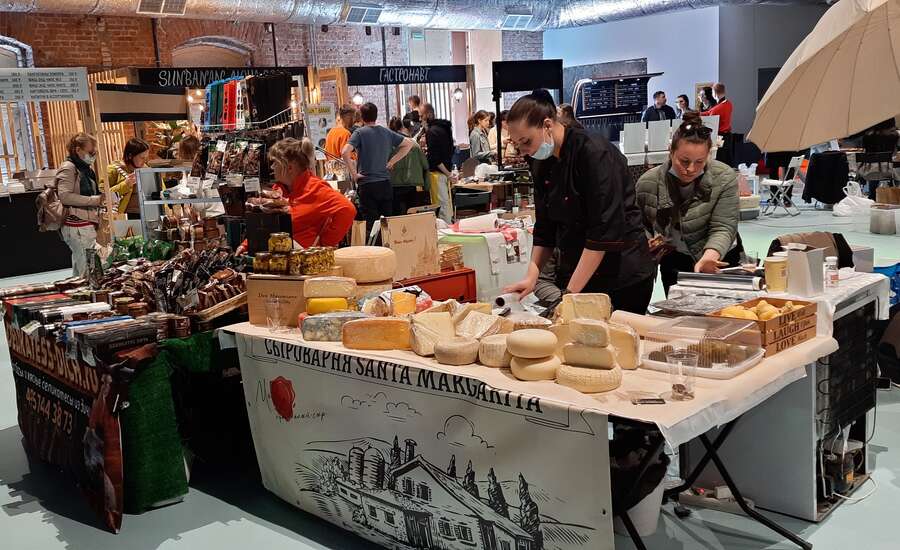 Every other weekend, one of the factory’s hangers is jazzed up with fairy lights, bales of hay and a bandstand. This is the perfect place to mingle with creative spirits that make St Petersburg what it is. Chat to local designers peddling their handmade goodies, try out scrumptious tasters from the artisan food stalls and find out what’s growing on from the family farmers. Visit Sevkabel’s website for details of upcoming markets: https://sevcableport.ru/ru/afisha

Gypsy fish and taproom: Live football and music, a jolly good stock of beer and fish any way you like— from cured to fried to rolled up in a sushi roll.

Inwinity: All the elements of a good wine— the sophisticated taste, delicate feel and subtle freshness— can be found as much in the stunning decor and faultless service of this high-end gastronomic wine bar as in its wine card.

Machti: Party with Russia’s freshest faces on the DJ circuit in the intimate surroundings of this trendy nightclub.

Morze concert hall: The biggest of names come to perform to the placed audiences at the relatively small, but impressive concert hall.

Skateshop: Rent a skateboard to test out your skills out in the indoor skatepark or learn how to ride the slick ramps like a pro with lessons from their super enthusiastic instructors.

ElectraBike: Explore the industrial architecture along Vasilyevsky Island’s shoreline on a cute California city bike available for both adults and kids to rent.

Ice Skating: Skate to the melodies of mellow christmasy songs on Sevkabel’s seasonal outdoor rink. With glowing lamps and mistle-toe above and the frozen Finnish gulf stretching out in front, there isn’t a more magical place in St Petersburg at this time of year.