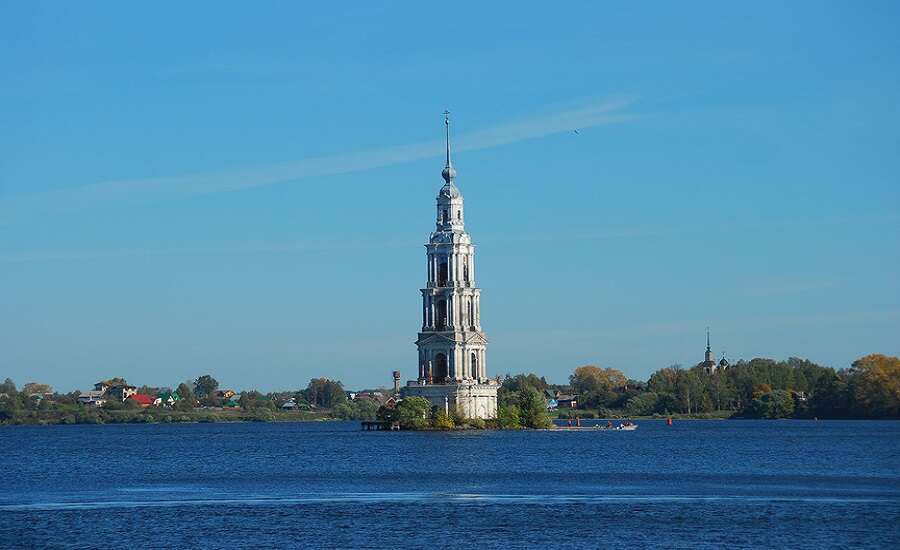 Kallyasin is one of the oldest cities of the Tverskaya region, and is situated on the bank of river Volga. It was first mentioned in the XII century. In 1134 Yury Dolgoruky founded a city-fortress Knyazin in the river Nert. Later, on the other side of the River Troitsky, the Kalyazinsky Men’s Monastery was founded and soon became the main feature, and cultural and economic center of the new city. In 1936-1940 the territory of the monastery was flooded and the main monument of the city were inundated. In its place a hydroelectric power station and a reservoir were built.

The names of many promonent Russian people are connected with Kalyazin: the writer Saltikov-Shchedrin was born here, and Ivan Krilov, Fonvizin, and Gukovsky often visited the city.

Today Kalyazin is merely a large city with 26 000 citizens; its main sight is a Bell Tower – the only part left from the monastery – that now stands, lonely, in deep waters.

From Belorussky railwaystation take a train to Rybinsk (a 4 hour journey) or train to Savelevo and there take another train to Kalyazin (departs 2 times a day). The whole trip will take 4 to 5 hours.