The History of The State Historical Museum 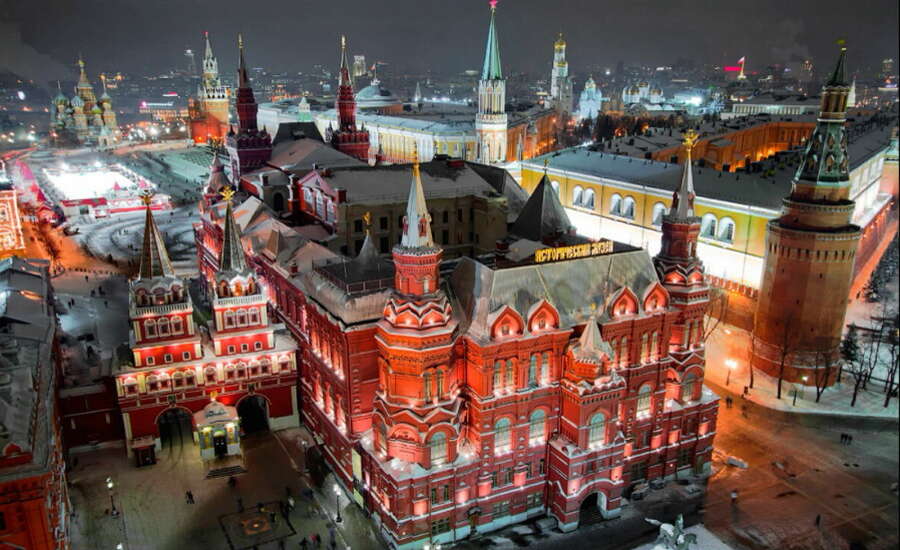 The team of Slavic historians who founded what was meant to be “the greatest museum in Russia” believed so fervently in their project that they were willing to take on 28 years worth of debt. Their vision, “To show that intelligent life in our country did not merely begin yesterday.”, took decades to realize and was hindered by multiple opponents. Located right on Red Square, the museum was meant to replace what was widely considered to be a ramshackle building that housed Moscow’s Main Pharmacy and a few lecture rooms of the Moscow University. But a few staunch locals kept the project stuck on the drawing boards till Tsar Alexander II finally gave the historians his blessing in 1872.
After opening in 1883, the museum blossomed under the attention showered upon it by the Imperial and noble families. Alexander the third’s younger brother chaired the museum and thousands of precious as well as personal items from Russia’s elite households were donated to the museum. The heyday of the State Historical Museum, however, was quick to eclipse. The austerity after WW1 and then the succession of the Bolsheviks doomed it to abandonment and desecration.

Did you know?
In 1937 the Bolsheviks commanded that the State Historical Museum’s most precious artworks be destroyed. The elaborate fresco of the Romanov family tree above the museum’s entrance hall would have been lost to history had not been for the genius of the lead painter entrusted with erasing all memory of Imperial Russia. Instead of scraping the paint off he carefully white-washed over it, allowing experts to restore the fresco 50 years later.

What can you see at the Pushkin State Museum of Fine Arts today?

What can you see in The State Historical Museum today?

With a collection numbering close to 5 000 000 items and 15 000 000 historic documents, this museum which has been developing for almost one hundred and fifty years has one of the finest and largest historical exhibitions in the world. 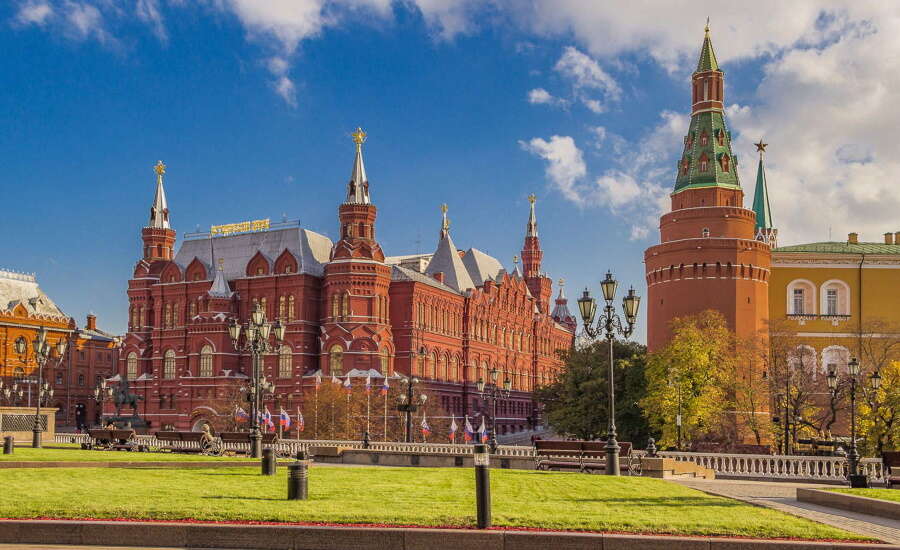 Fittingly for its prestigious location in the heart of Moscow, the design of the State Historical Museum is opulent, thoroughly Russian in style and as red as can be. Its multiple towers seem to form a crown over its mammoth body and the onion-shaped arches look straight out of a Russian fairytale. No wonder that the building itself is a UNESCO heritage site.

Inside the view is even more spectacular. Each hall was deliberately styled to reflect the character of its exhibits. Replicas of the almost luminescent paintings of the Sophia Cathedral in Kiev decorate the walls of the room dedicated to the history of Kiev Rus’. While the Moscow hall, which covers Russia’s Imperial history, is modelled on the Monomakh’s cap— the Russian monarchy’s most ancient crown. 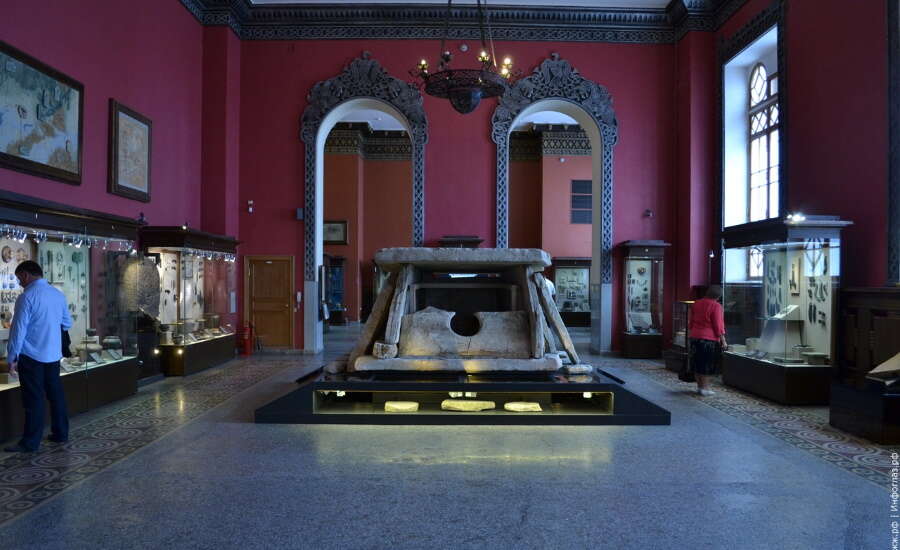 Stepping into the State Historical Museum is as close as one can get to going back in time. Volga longboats, Scythian gold artefacts, 6th-century birch bark scrolls and folk crafts paint an impressive picture of the civilized ancient Slav culture. Fossilized Siberian mammoths remind visitors of the brutal realities the first Russians had to face.

The works of Russia’s deftest hands, like Repin and Mikhail Vrubel, bring art lovers from all over the world to this museum. The museum’s greatest work, however, is not hung on, but rather is part of the walls. The elaborate fresco of the Romanov family tree covers 220m2 and includes 68 royals, starting from the 10th-century ruling couple Vladimir and Olga. 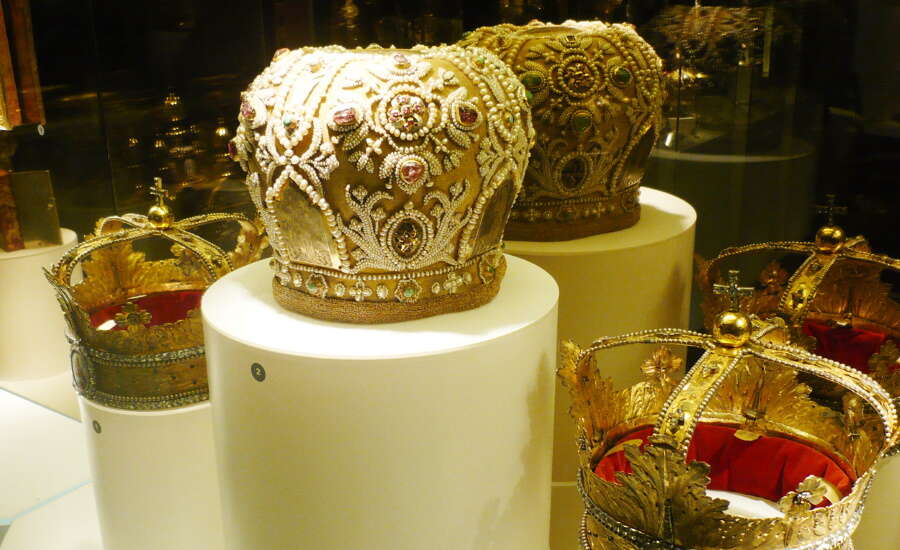 A hat with an actual dead bird squatting on top of it, a golden cup hand-crafted by a tsar, the personal belongings of Peter the Great: the items on display at the State Historical Museum offer a unique and intimate insight into the Romanov dynasty. Another kind of royalty—that of the Soviet elite— is also represented through, for example, an exhibition of Vladimir Lenin’s possessions.

Did you know?
The museum’s coin collection totals up to a dazzling 1.7 million coins— by far the biggest collection in Russia!

Essential information
Unfortunately, English signage is practically non-existent in this museum. Though English audio guides can be acquired for an additional fee, we recommend taking a tour with one of our knowledgeable guides to ensure that you do not miss out on the fascinating history behind this museum’s great collection.

There are a number of ways to get to The State Historical Museum:
- By taking the metro to Okhotny Ryad and then walking.
- If you take a private tour with Express to Russia, you will travel via your own private vehicle.