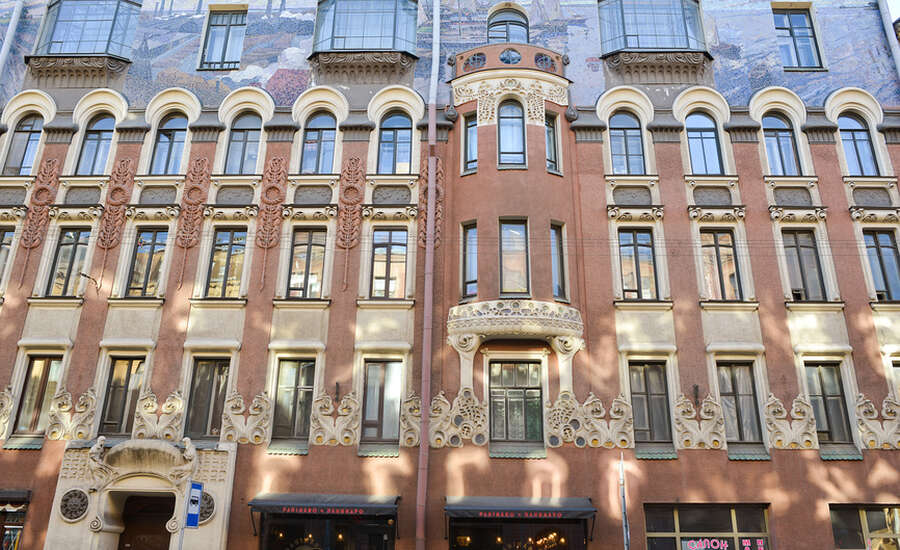 What are the most beautiful Art Nouveau buildings in St. Petersburg?

St. Petersburg, Russia’s cultural capital, was shaped by the artistic trends that spread across Europe and the world. One such trend was Art Nouveau, which emerged at the beginning of the 20th century. A movement characterised by natural motifs, fluidly undulating lines and asymmetry, Art Nouveau merged art and design with even the most functional of everyday objects - such as buildings. In Russia, Art Nouveau was known as ‘Stil modern’ (the modern style), and its striking characteristics shaped the appearance of the northern capital. Several thousand Art Nouveau buildings have been preserved in St Petersburg to this day. For those with a keen eye, the style can be found not only in unmissable structures on the city’s main arteries, but also in little snippets such as doorways, railings, and windows throughout the city. Check out our guide to five of the most outstanding masterpieces of Art Nouveau in the city, and keep your eyes peeled when visiting St. Peterbsurg. 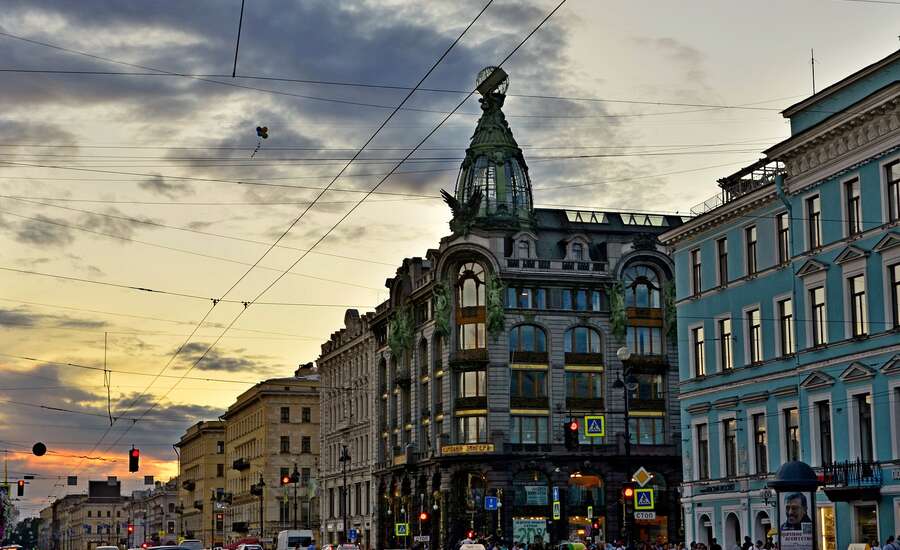 Image by Georg Adler from Pixabay

St. Petersburg’s most famous bookshop is incidentally one of the city’s most recognisable landmarks and its most famous Art Nouveau building. Dom Knigi (the House of Books) sits in a splendid location on the corner of Nevsky Prospekt and Canal Griboedov, between Kazan Cathedral and the Church on Spilled Blood. Designed by renowned architect Pavel Suzor and commissioned by the Singer sewing machine company, Dom Knigi was an architectural phenomenon for its time. It was the first building in St Petersburg constructed around a metal frame, allowing for huge, ornate windows. Natural and floral motifs are forged from bronze and creep up the building. Tendrils intertwine themselves with the glass dome topping the building; the dome itself was constructed in defiance of height restrictions in St. Petersburg’s centre, and distinguishes Dom Knigi from its neighbouring buildings. The Singer Building housed the American Embassy during WWI, it became a publishers and book shop after the October Revolution, and eventually the home of Dom Knigi and the headquarters of Russian Facebook, VKontakte. 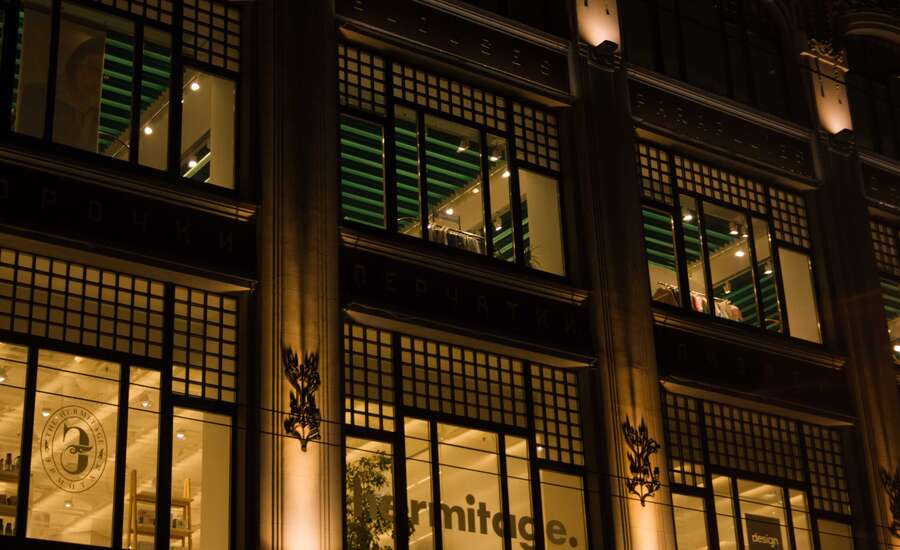 This imposing building on the Petrograd Side belonged to the Duke of Leuchtenberg, Tsar Nicholas I’s great-grandson and a prominent military figure. The apartments were the ground-breaking creation of architect Theodor von Postels, and were only his second major work. The building’s unique Art Nouveau decoration has recently been restored. An enormous mosaic depicting dreamy rivers and seas reaching the shores of an industrial city (an unusual motif for Art Nouveau style) covers the top floor of the building. Behind the mosaic lay artists’ workshops, and the piece itself was crafted by the same artist who created the mosaics for Church on Spilled Blood, V.A. Frolov. Eye-catching stucco carved into breaking waves fluidly frames each floor, standing out against the red bricks. The Duke of Leuchtenberg apartments are a must-see for those exploring the Petrograd Side, an island north of the River Neva. 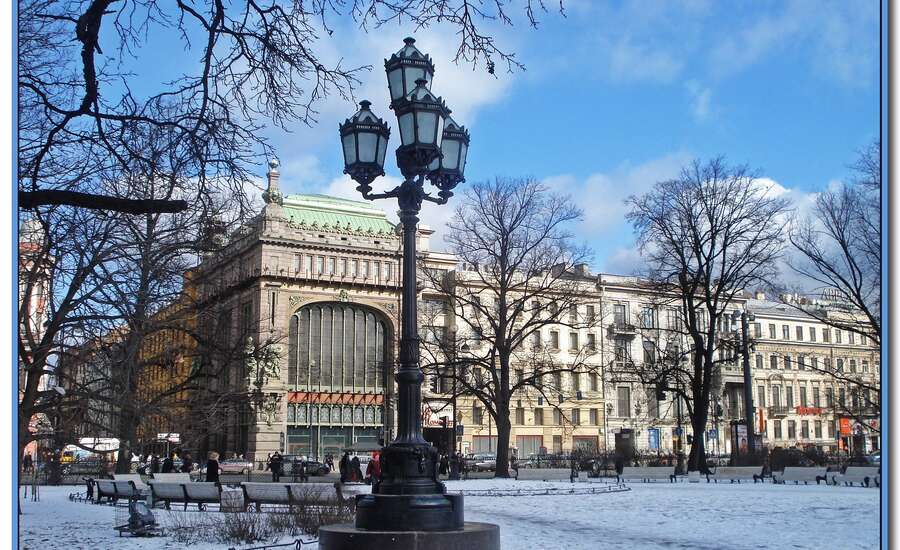 Image by mobinovyc from Pixabay

Another of St. Petersburg’s most outstanding Art Nouveau buildings is the Eliseyev Emporium on Nevsky Prospekt. It was commissioned by Grigorii Eliseyev in 1898, the head of one of Russia’s richest merchant families, as the Fortnum and Masons of St. Petersburg selling such delicacies as truffles, oysters and spices. The Emporium even retained its reputation during the Soviet period and until the present day (so make sure to pop by for some delicacies!) The same technology that was used in the construction of Dom Knigi allowed the Eliseyev Emporium to be fronted by a stained-glass window nearly 5 storeys tall, bordered by garlands of leaves and berries unfurling all the way to the Emporium’s roof. Allegorical statues depicting the figures of industry, trade, art and science adorn the shopfront, proffering prosperity and luxury to customers. The interior of the main hall is as illustrious as the exterior; today, it has been restored almost exactly as it was in the early 1900s. Admire golden flowers embellishing the walls and ceiling, warmly-lit floral lamps clustered in bunches, and elaborate balconies curving around the top of the room and over a large central mirror. It is a must-visit both inside and out for anyone coming to St. Petersburg. 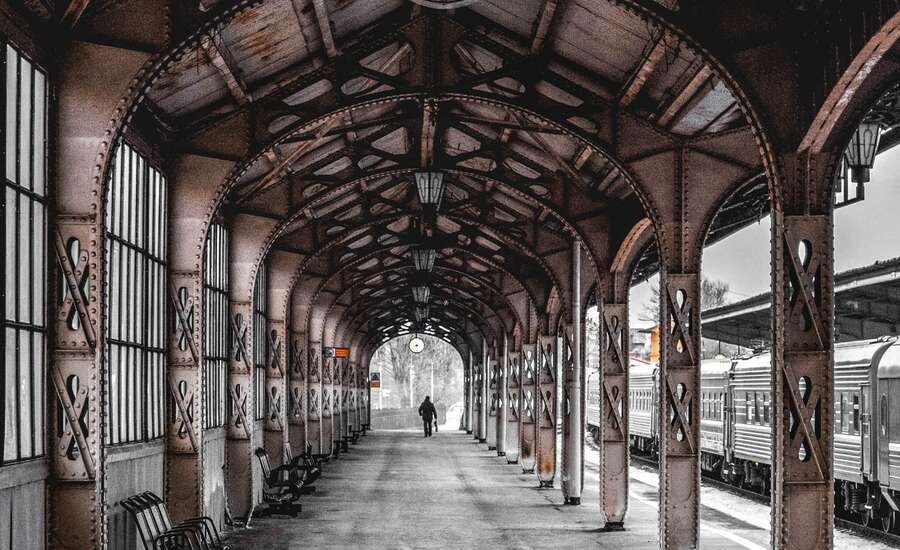 Vitebsky Station is Russia’s oldest train station, which opened its doors in 1837. It is certainly Russia’s most beautiful train station as well as St. Petersburg’s first Art Nouveau building. The present-day building was built in 1904 and reconstructed meticulously in 2003. The exterior is distinguished by enormous semicircular windows and sweeping carved balconies. Vitebsky’s opulent interior was ingeniously crafted by Semyon Minash, making Vitebsky Station more similar to a palace than a station! Two staircases descend into the vast main hall, the walls, ceiling and doors are embellished with gilded leaves, and light pours in through an enormous stained glass window. Landscape friezes depicting scenes from St. Petersburg and Odessa lie atop more stained glass lining the interior walls of the hall. Unsurprisingly, the main hall is a popular spot for wedding photos. The station even has its own concert hall, complete with a grand piano, furniture and doorways carved with strikingly fluid lines, and paintings of flowers, vines and peacocks adorning the walls and ceiling.

Looking for some off-the-beaten-track sights? Read our article on the best non-touristy things to see in St. Petersburg.