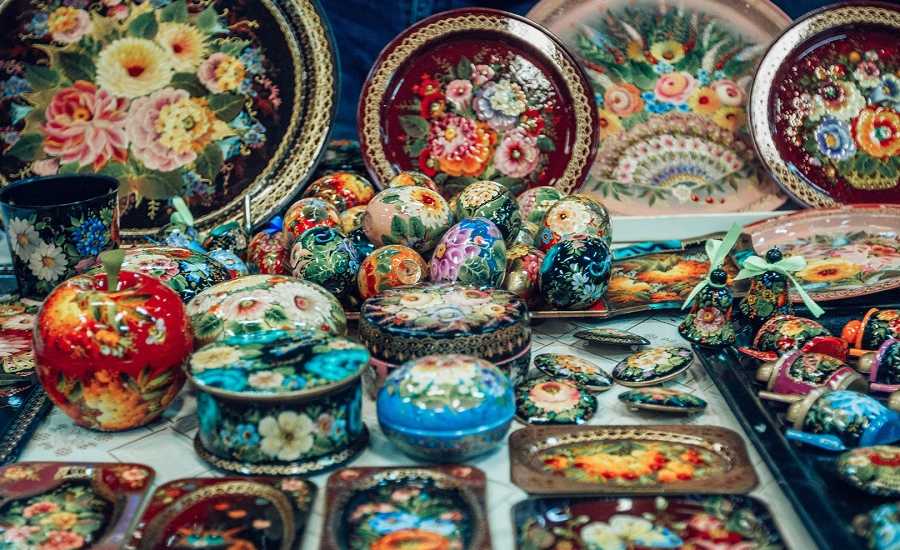 What are the best gifts to bring back from Russia?

Russia has a very rich tradition of folk arts and crafts from all corners of the land. If you’ve enjoyed the folk and arts sections of the Russian and Ethnographic Museums in St Petersburg, Decorative & Folk Art Museum in Moscow, or Russia’s other national museums, then you’ll be pleased to know that you can bring a little of this great tradition back with you! These handicraft souvenirs give you a peek into the artistic and folk traditions of Russia which have persevered throughout the centuries despite all the odds. 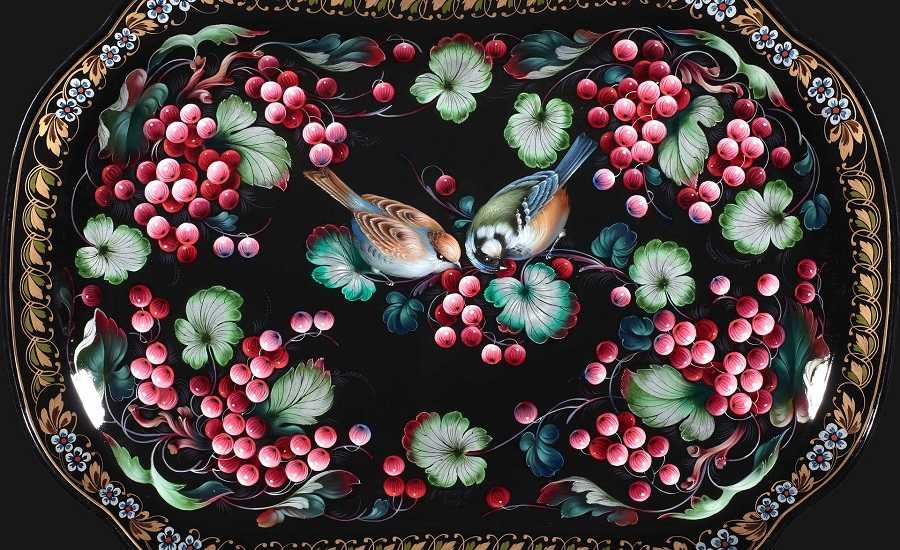 Zhostovo painting is the practice of painting on metal trays. Compositions typically depict flowers, small animals and fruits in vibrantly layered oil paint. Each tray is made according to artisanal tradition, hand-painted by an expert, then lacquered and polished until you have a simple but beautiful tray, the perfect decorative souvenir to take home. The first workshop producing these handcrafted trays was founded in 1825 by a peasant, Osip Vishnyakov, in the village of Zhostovo in the Moscow region. The style was kept in alive during the Soviet era by local craftsmen. The factory still exists today, named the Zhostovo Factory of Decorative Painting, and trays can be purchased there or at the official shop in GUM on Red Square. Genuine trays have two distinct stamps on the bottom: one says ‘Жостовская фабрика декоративной росписи’ (Zhostovo Factory of Decorative Painting); on the other is a small bell and brush. 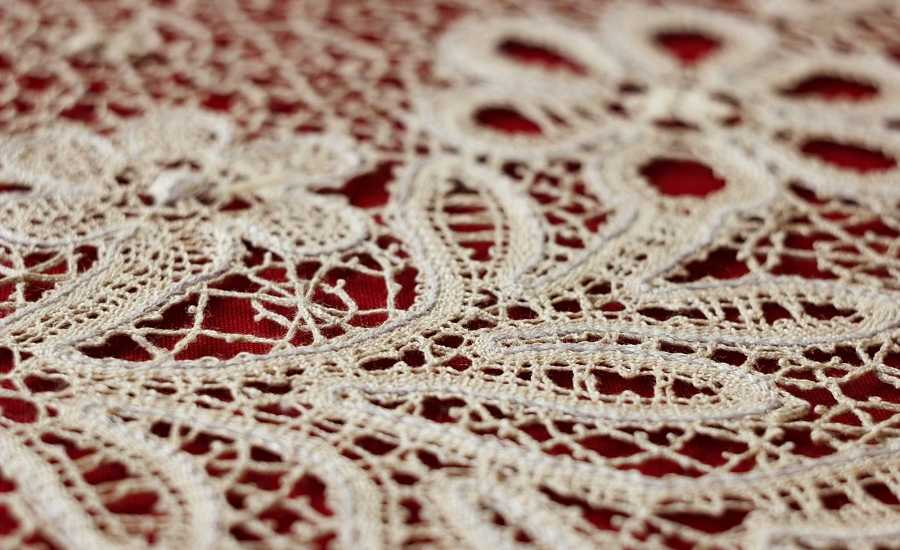 Vologda lace has been produced since the 17th century and was initially created for the church and aristocracy. During the 19th and 20th centuries, the golden age of Russian arts and crafts in Vologda, lacemaking became a fine art. This tradition never stopped and craftsmen in the Vologda region continue to practice their trade today. Vologda lace is beautifully layered, intricate and durable. Pieces depict geometric patterns, animals and flowers, or even scenes from folk tales. Flax is the most commonly used material, but pieces can also incorporate coloured threads, and historically some patterns were even woven with precious metals! You can purchase clothing, tablecloths, small handkerchiefs or even Christmas ornaments. 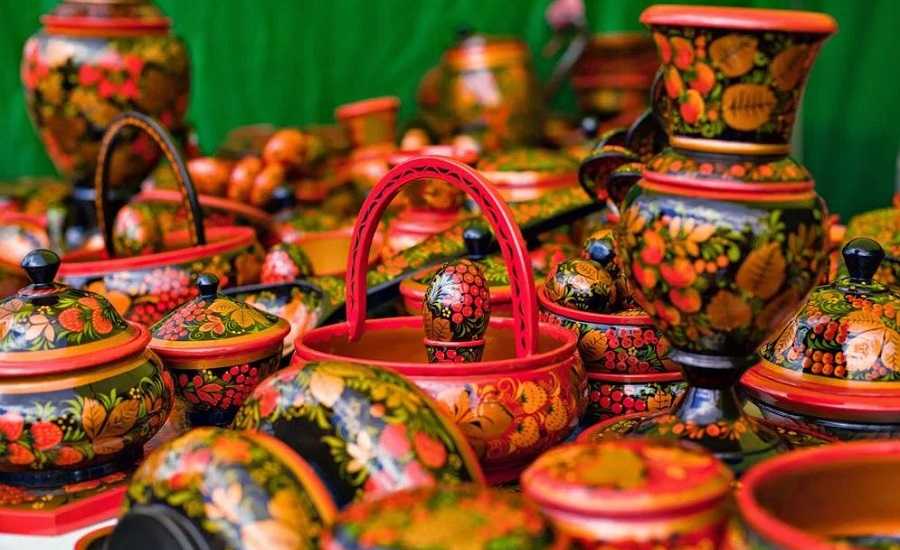 The Nizhny Novgorod region has an incredibly rich folk culture. Its most well-known craft is Khokhloma, a painting style which originated in the village of Kovernino in the 1600s. According to local legend, the Old Believers who took refuge in Nizhny Novgorod used their religious painting style as inspiration for Khokhloma. Rural and natural folk motifs inspired by the landscape around Kovernino are transformed into art, red and yellow patterns are painted over a black varnish background depicting flowers, fruits and grasses. The designs are painted onto a myriad of different wooden utensils, from simple spoons and cups to incredibly ornate serving dishes in the shape of creatures from folk tales - a beautiful and striking piece for you to take home. The Khokhloma spoon is one of the most recognisable pieces and was even sold as part of the 2018 World Cup merchandise. Legitimate pieces can be found at the original workshops in Nizhny Novgorod, the Rus Velikaya shop in Moscow, or the Samovary shop in St. Petersburg. 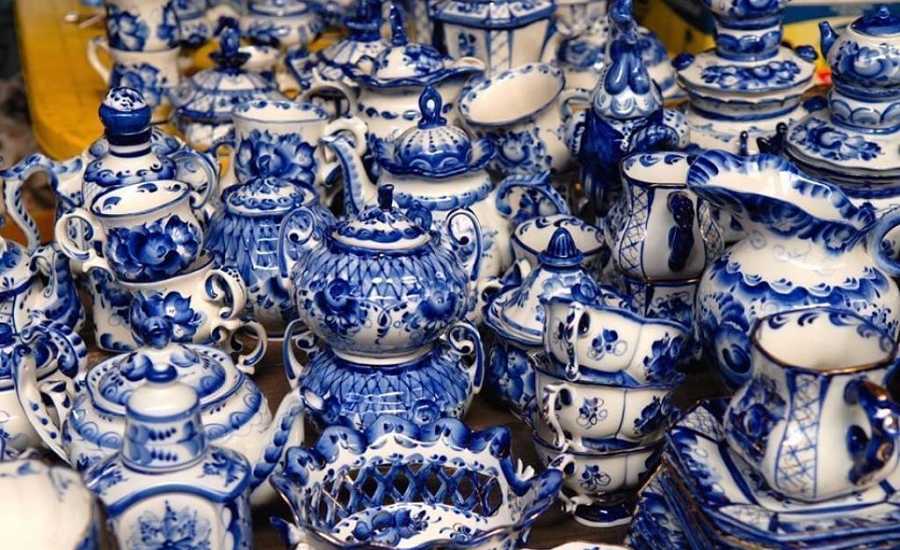 These ceramic pieces decorated with striking designs originate from the villages in Gzhel, an area with high-quality clay near Moscow. Gzhel ceramics are one of Russia’s most famous handicrafts and are very popular souvenirs: the most recognisable are cobalt blue on white background, but Gzhel also produces different coloured ceramics. Designs typically depict scenes from rural and village life. Gzhel ceramics are traditionally domestic utensils or ornaments, such as decorative serving dishes and teapots, and even clocks. Original Gzhel products can be purchased at the factory in Turygino, or at Russkaia Galereia in Moscow. Original products have one of two stamps on their base: a double-headed eagle and the word ‘Гжель’; or an oval ‘Гжель’ stamp with ‘handmade in Russia’. Genuine stamps are underneath the enamel and so cannot be rubbed off. 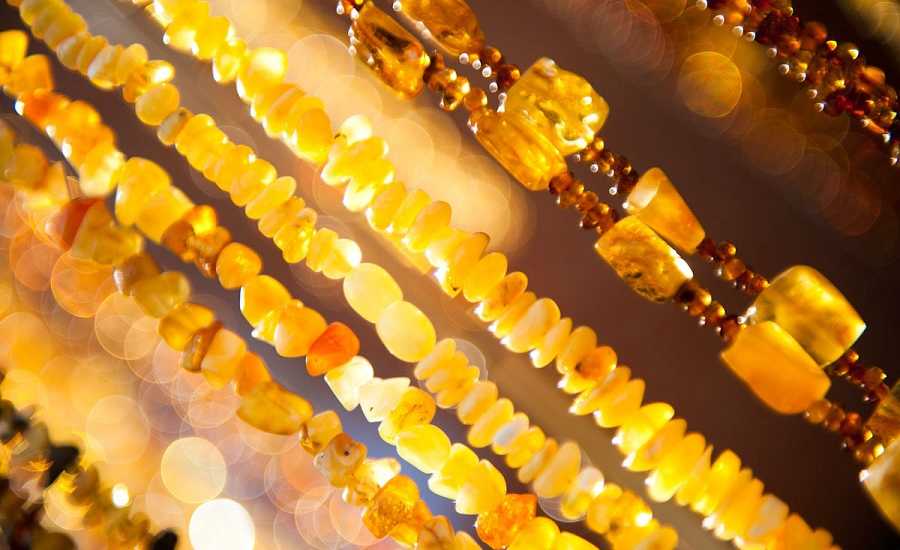 In Russia, Baltic amber is abundant - around 90% of the world’s amber is found in Kaliningrad! Baltic amber has been crafted into jewellery since the Stone Age and is beloved by Russians - anyone who has visited the Amber Room in Tsarskoe Selo will understand. Many different colours of amber can be purchased, such as green, ivory or honey, and Baltic amber is considered to have healing properties. You can buy various different pieces, from carved jewellery to unpolished chunks containing insects. You should purchase amber from recommended shops and your piece should come with certification. You can also test for fake amber yourself - Baltic amber sinks in freshwater and floats in salty water (though you should probably ask before attempting this in the shop!) 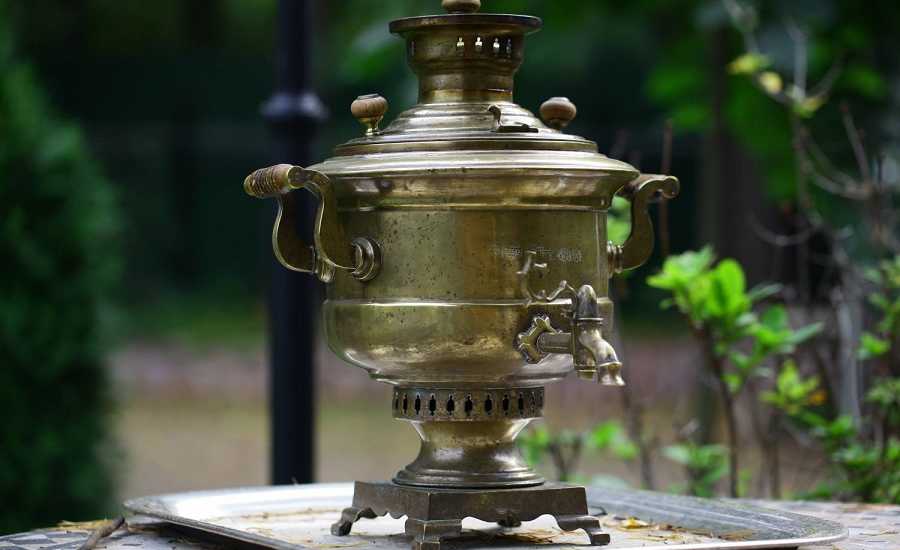 One of Russia’s most recognisable symbols is the samovar, a large metal container used to heat water for tea. The name samovar translates as ‘self boiler’. Central Russia and the Tula region have been the centre of samovar production since the 18th century, and for hundreds of years it has been a symbol of home, warmth and comfort, and no meal was complete without one. You can buy samovars of many different styles, sizes, and materials, acquire an ornate antique samovar or an electric one, and bring Russia’s tea culture to your own home. Samovars can be purchased at many souvenir shops, but for something more authentic and interesting head to one of Russia’s flea markets. Be aware that you may need an export permit to transport a non-electric samovar out of Russia, as it is considered an item of cultural value. You should enquire about a certificate before purchasing.

Looking for something less conventional? Check out our article on yummy souvenirs