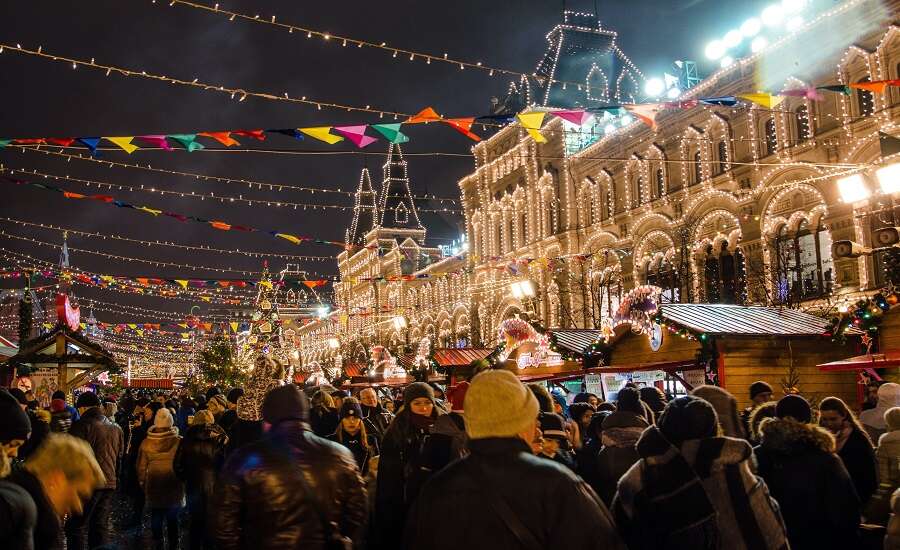 Photo by Daniil Silantev on Unsplash

Celebrating New Year’s is all about the fizz, the fun and the glamour, the city lights shining and the champagne flowing. So, where better place could there possibly be to celebrate this momentous event, than in the biggest city in Europe – Moscow? Bigger is better when it comes to New Year’s, and Moscow doesn’t need to be told twice. For Russians, it is the most important holiday in the calendar – this joyous day is like Christmas and New Year’s all rolled into one. Unlike in Europe and the U.S., where New Year marks the end of the festive period, in Russia the 31st December is just the beginning and kicks off the holidays that fill those first cold weeks of January. Now is the moment for Russians to really let their hair down and party – will you join them? 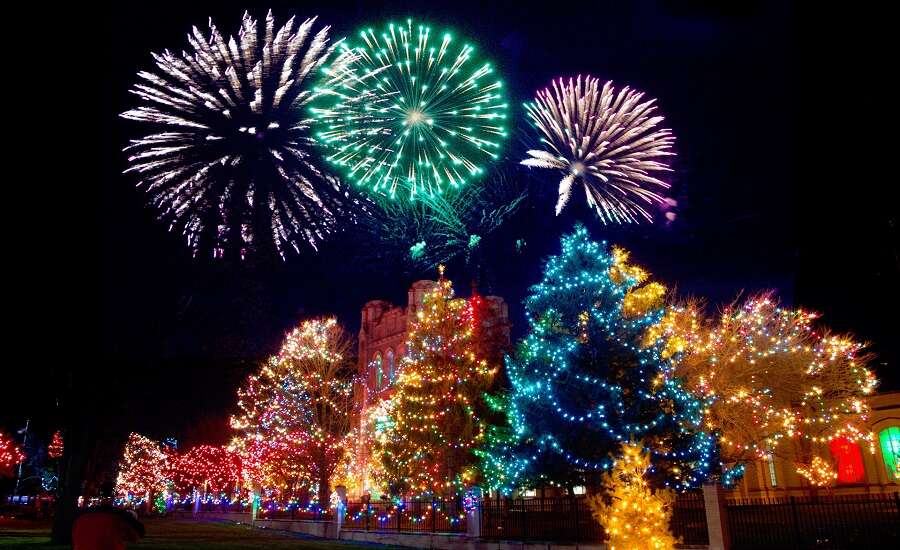 Photo by Jill Wellington on Pixabay

Moscow’s largest celebration is the ‘Journey to Christmas’, with festive events held for several weeks from December to January all over the city. There are fun events for all ages and interests – kids’ shows for the little ones, music for Moscow’s young people, ice rinks and slides for the adventurous ones, markets for foodies, the list goes on… Each of the 27 festival sites around Moscow has a different theme based on Christmas and New Year’s traditions from around the world. Some of the highlights of 2021/22’s Journey to Christmas include:

Moscow’s most famous festive fair takes place on Red Square. The GUM Fair, organised by the famed department store, is the perfect place to bathe in festive cheer and stock up on New Year’s and Christmas treats with a backdrop of the Kremlin and St Basil’s Cathedral. Here you can find national souvenirs such as decorated felt boots, knitted mittens, Orenburg and Pavlovo Posad shawls and other artistic folk crafts, and warm up from the cold with mulled wine, aromatic sbiten (a honey drink), Russian pancakes, fried Bavarian sausages, Viennese waffles, hot chestnuts and other delights. 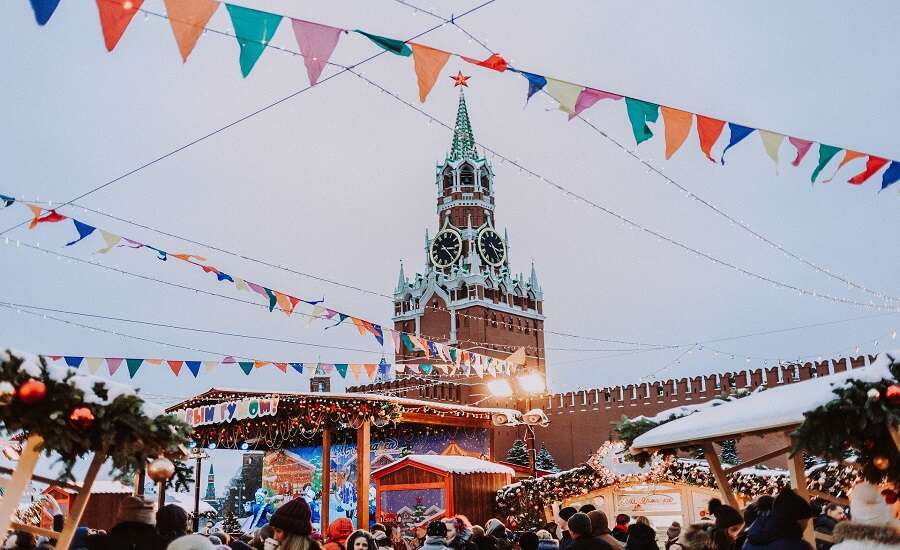 Photo by  Marina Stroganova on Pixabay

The lap of luxury

The Four Seasons is one of Moscow’s most opulent hotels, and it organises New Year’s parties to match. At this year’s party, the City of Crystals, guests will celebrate like imperial aristocrats: the program includes ballet, singing and magic performances, traditional Russian plays, an impressive raffle, and DJ sets so you can dance the night away – all with a view of the snow-covered Moscow Kremlin unfolding below. The entertainment will be accompanied by a gastronomic journey of luxury delicacies from across the world – from tuna tataki with truffle ponzu to Kamchatka crab salad with sturgeon caviar. And of course, the champagne will be flowing all night long!

See in the New Year in style at the Kempinski’s Royal Night parties in the Baltschug Grill & Café Kranzler, Panoramic Moskva, and the Library Room.

Moscow’s elite restaurant, Turandot, is famous for its extravagant celebrations over the festive period. And this year’s certainly don’t disappoint!

The theme of Turandot’s New Year’s party is the gloss, glamour and fun of the 1970s disco! Legendary New York nightclub Studio 54 meets Moscow party vibes, with live music from Sergey Lazarev and Christina Orbakaite, a cocktail-and-disco-glam dress code and a 6-course chef’s menu. Ticket prices are not for the faint of heart, ranging from 55,000 – 199,000 roubles per person, but this truly will be a New Year’s like no other in one of Moscow’s most fashionable restaurants.

If you’re more of an early bird than a night owl, then Turandot’s Christmas Brunch has you covered. It is held from the 7th-9th January to celebrate Old Russian Christmas. Pan-European and Asian cuisine and an open bar await you, with dishes including traditional Russian salads and pancakes with crab, champagne sauce and caviar, and you’ll dine in the spectacular Florentine Courtyard, surrounded by unique palace interiors decorated in chinoiserie style. Brunch costs 6,950 roubles including alcohol per adult, 2,450 roubles for kids up to 12 years old. 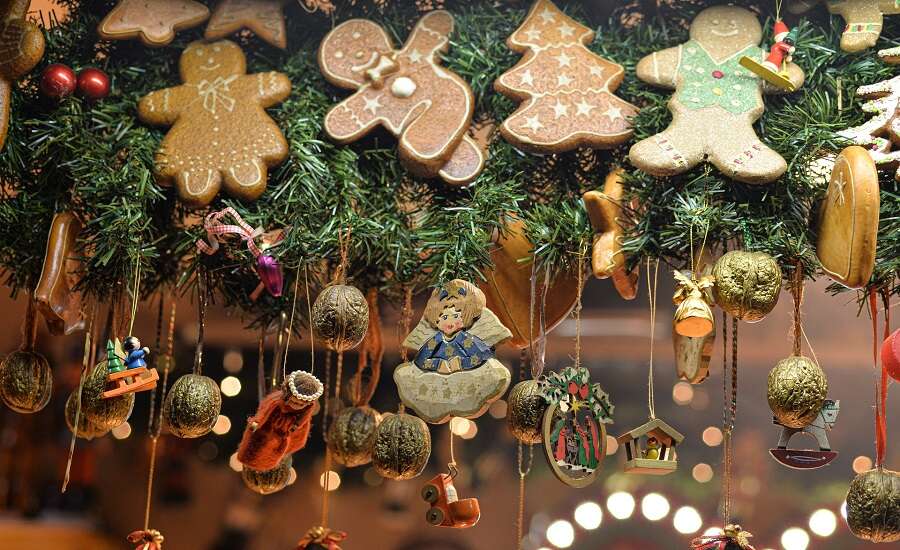 Photo by Eugene Zhyvchik on Unsplash

New Year’s at the Metropol Hotel

One of the most historic hotels in Moscow invites you to its illustrious New Year’s celebration, which promises a fully immersive experience of light, sound, music and dancing. A live band and DJ set will keep the party going, and a ballet performance and magic show will ensure that the excitement doesn’t stop even for a moment. With a festive menu designed by chef Andrei Shmakov and unlimited alcoholic drinks, guests can eat and drink to their hearts content. Little guests are looked after, too, with a kids’ entertainment program.

Tickets start from 55,000 roubles. The night kicks off with a welcome reception at 8:30pm, and the New Year’s celebration begins at 10pm.

Moscow’s legendary literary café welcomes you to its annual winter fairy tale. It is located in an 18th-century mansion; Pushkin himself wandered these halls, and now you will party here on the most important night of the year! The meal will be accompanied by the peaceful melodies of a string quartet, harp and flute, and the festive programme is headlined by the Russian rock and roll band “Bravo”. Tickets are sold for different halls, including the Pharmacy Hall, lined with curious medicine bottles, and the Library Hall, decorated with antique scientific equipment, vintage clocks, and thousands of books. Of course, the historical details of this opulent mansion are enhanced by elegantly-decorated Christmas trees! 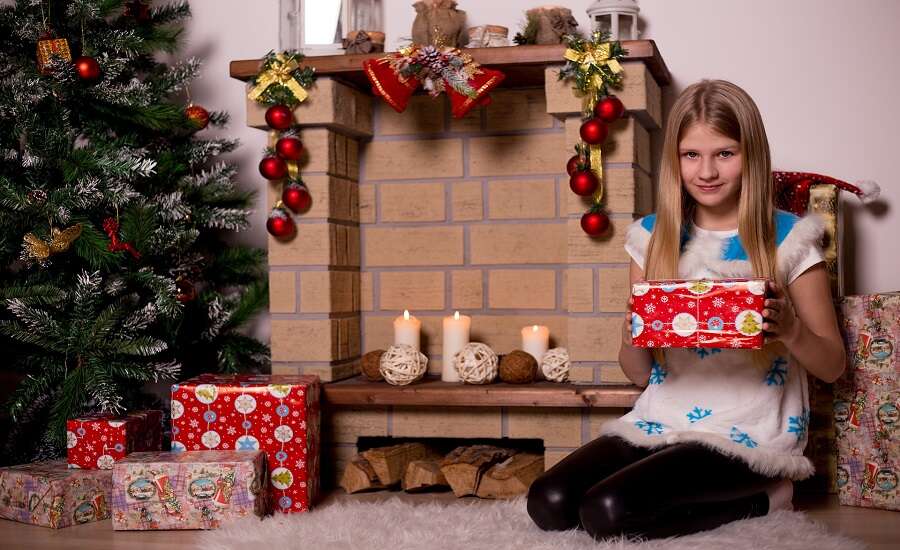 Image by Виктория Аникина on Pixabay

Some might say that if you’ve seen one New Year’s celebration, you’ve seen them all – festive trees, singing and dancing, Olivier Salad... If you’re one of these people, then look no further than Panorama360 in Moscow City. Located on the 89th floor of the Federation Tower, Panorama360 is a place of hyperbole – Europe’s highest observation deck, ice cream and chocolate shop, and now, Europe’s highest New Year’s celebration! Your kids will be in heaven with Panorama360’s New Year’s programme, involving interactive science, magic and light shows, TikTok making with Panorama360’s polar bear mascot, unlimited chocolate and ice cream tasting, festive gifts, and of course access to the observation deck with an unparalleled view over Moscow.

For parents who want to see in the New Year in style, but want an equally exciting experience for their little ones, Kempinski delivers. At the centre of their Kids’ New Year celebrations is Ded Moroz, and his team of professional actors will help make the evening a truly special one. Kids can look forward to dancing around the New Year’s tree, sweet treats and gifts, and a festive menu.

The Snow Queen at Turandot

There’s something at Turandot for all the family – on 5th January, the restaurant will host a New Year's fairy tale "The Snow Queen". The opulent Silver Hall will be transformed into the castle of the Snow Queen, serving a multi-cuisine brunch of more than 20 dishes crafted by Turandot’s chef, Dmitry Eremeev. Festive entertainment includes masterclasses and a disco, and the festivities end with sweet treats from Ded Moroz and Snegurochka.

What do you get if you cross Russian ballet, classical music, folklore and wintery weather? Magical New Year’s performances on ice, that’s what! Highlights of the New Year’s repertoire in Moscow include: 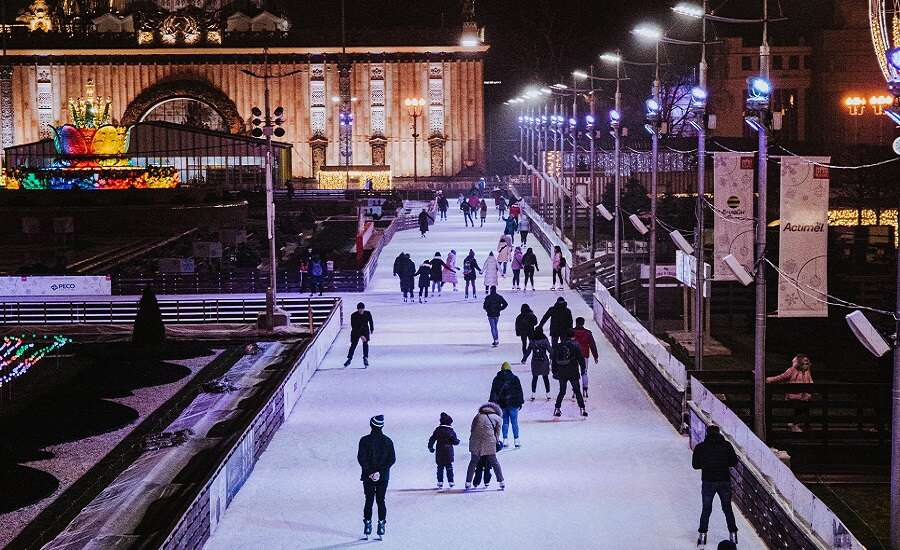 Photo by Klara Kulikova on Unsplash

Holding glorious firework displays on holidays has been a Russian tradition since the times of Peter the Great – New Year without fireworks is like New Year without a tree or Olivier Salad! There are locations all over the city where Muscovites can enjoy the beautiful show, but the main firework display begins at midnight on Bolshoy Zamoskvorechy Bridge next to Red Square. Those lucky enough to be in nearby parks, squares and streets will experience 50,000 fireworks released into the sky, a dazzling display welcoming 2022. As this is the most magnificent display in the country, the surrounding streets are packed. Many Muscovites choose to watch the display on television, or head to smaller, but no less wondrous displays elsewhere in the city:

As part of the Journey to Christmas festival, there are 18 ice rinks spread across Moscow where you can skate for free! Aside from these, Moscow’s famous parks make the most of the frozen temperatures to open ice rinks. They include Gorky Park, Izmailovsky Park, Sokolniki Park and Babushkinsky Park. If you prefer a more adrenaline-filled activity, then you’re in luck – ice slides are hugely popular in Russia, and the best ones can be found on Red Square, in the Hermitage Garden, VDNKh, Luzhniki, Bauman Garden, Sokolniki Park and Izmailovsky Park. 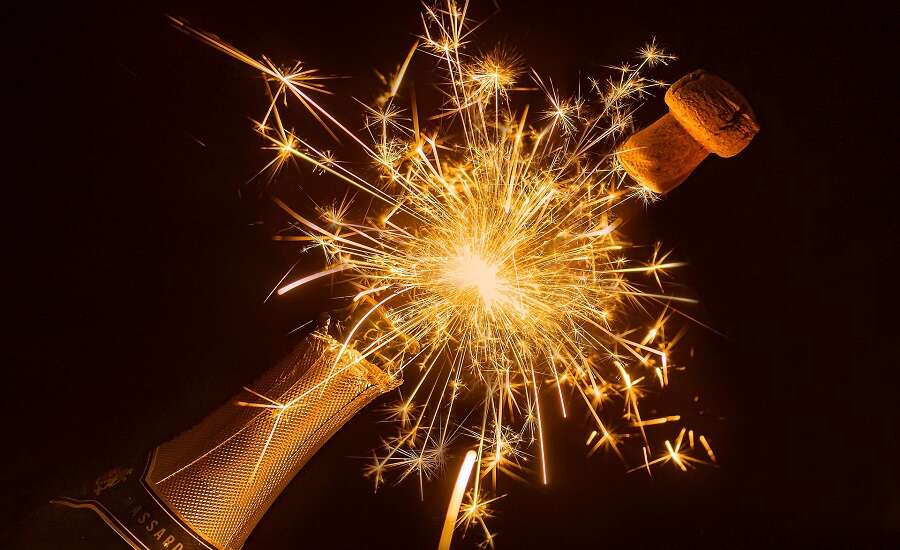 Image by Myriams-Fotos on Pixabay

Coming to Moscow for the New Year? Learn about the best Christmas markets and other winter activities in Moscow.