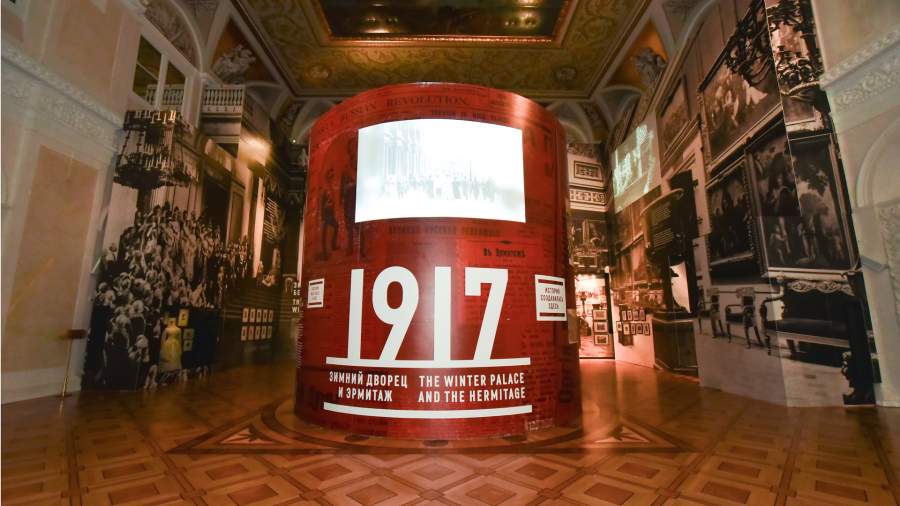 New Exhibition "The Winter Palace and the Hermitage. 1917. The History has been created here"

The grand opening of the exhibition "The Winter Palace and the Hermitage. 1917. The History has been created here" took place on 25th of October 2017, in the Feldmarshals' Hall of the Winter Palace.
The exposition includes over 350 exhibits from the Collection of The State Hermitage Museum, the State Archive of Russian Federation, the Military Historical Museum of Artillery, Engineers and Singal Corps, State Open-Air Museum "Pavlovsk", the Faberge Museum and Russian National Museum. The portrait of Nicholas II and Lenin from the private collection of the secondary school № 206 of the Central district of St. Petersburg.
The press conference in the Hermitage Theatre has preceded the opening of the exhibition. At the ceremony, Mikhail Piotrovsky, the Director of the Hermitage Museum have said: "We open the exhibition, dedicated to the 100th anniversary of the Russian Revolution on a day of its main event - the arrest of the Interjacent government. The Hermitage - it is more than a museum. It is a monument of Russian nationhood. Significant happenings took place here and the walls carry the memories of those.
The broadest exhibition of 2017th took place at the parade halls of the Winter Palace from the Jordanian gallery on the 1st floor to the Small dining room on the second floor. For the exhibition the special "Revolutionary route" from the Oktyabrskiy carriage-drive to the Dinette, which replicated the route of the military assault on the Palace during the night from 25th to 26th of October 1917th.
The design office «Bureau Caspar Conijn» from Amsterdam, Netherlands was in charge of the exhibition design development. Original exhibits are complimented with audio, video, large replicas, and artistic lightening. It is the first time for the Hermitage Museum to create a synthesis between exhibits, lights, sounds and visual representation.
In the evening of the opening day, the musical and poetic mystery was played at the Palace Square right after the bell tower ringing, which began with the first lines from the letter of Lenin to the Central Committee. The music by Rimsky-Korsakov, Prokofiev, Mozart, and Beethoven, as well as poems by Blok, Gippius, and Akhmatova,  were played and read at the Square. The fragments of music from ballet "Nutcracker", the opera "Boris Godunov", which were played in the evening of 25th of October 1917th in the theatres of Petrograd. The walls of the Winter Palace were lit with red color, which was the historical color of the Palace's walls during the events of 1917th. The mystery was organized by the State Hermitage Museum in cooperation with Committee of the Tourism Development of St. Petersburg.

The Catalonian Surrealism in the Hermitage Museum

The Cinema Hall on the Palace Square