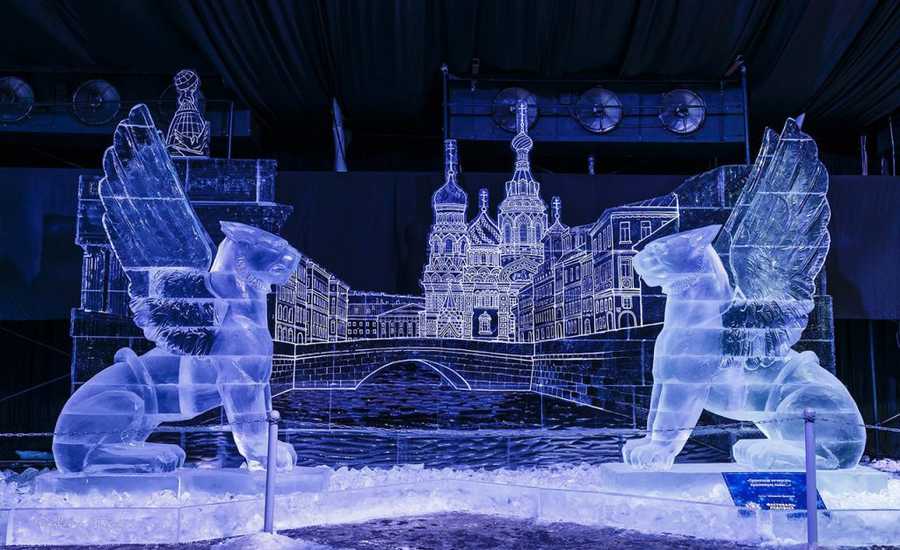 On the territory of the Peter and Paul Fortress has opened the Festival of the Ice Sculpture "ICE FANTASY — 2019". Over the exposition worked more than 30 people, including the leading ice-sculpting artists from Russia and other parts of the World. Under the rooftop of the tent next to the Naryshkin bastion, the leading professionals, the winners of the various international competitions, which took place in Belgium, France, Germany, China, and other countries have created the marvelous space of ice replicas of the world's treasures.

The hosts of the exposition have been willing to give more freedom for creativity to the sculptors and have selected the theme "Around the World", which invites people to see all 6 continents of our planet with its typical architecture, flora, and fauna and also the underwater ocean world.

The scale of the theme "Around the World" does not have any boundaries!

The ice fantasy will take you from the underwater world of Australia to the hot jungles of South America, from the always cold Antarctic to the Egyptian pyramids in Africa, from North America to Europe and Asia. The Venetian gondolier, the magical Indian totems, the ancient statues of pharaohs, the Statue of Liberty, the Reindeer, the Icy snake of Anaconda from the shores of Amazon river and penguins from the South Pole are waiting for you in the "ICE FANTASY — 2019".

For the residents of St. Petersburg the hosts of the exhibition have prepared the special surprise. For the first time, the Sailing-ship with Scarlet Sails will appear in St. Petersburg in Winter. The symbol of the summer St. Petersburg will be floating under the dome of the tent, taking the visitors to the journey "Around the World". The sculpture of the "Scarlet Sails" is the tallest on the festival, and is 8 meters high and serves as the symbol of the wonderful dream, which should definitely be fulfilled in the New Year.

The VI International Festival All Together Opera starts off in St. Petersburg